GLENVIEW -- The two teams that finished atop the SHL regular-season standings will square off with the SHL tournament crown on the line, a fact finalized by New Trier’s 4-1 win at Glenbrook South on Tuesday.

New Trier won the regular-season series two games to one over Loyola so the Trevians will have home ice advantage for the three-game championship series. The finals also feature the top-two ranked teams in Illinois in No. 1 Loyola and No. 2 New Trier.

“That is going to be a tough series,” New Trier coach Chad Bidwill said. “Loyola is extremely deep offensively, and we’re pretty strong defensively — we gave up the least amount of (SHL) goals this year. Both teams are playing well and it’s going to be a battle.”

After a scoreless first period, Glenbrook South got its goal from Will Papalas, scored early in the second period, before New Trier scored three times in three minutes down the stretch.

Chessen, Hawkins, and Smith all buried shots to give New Trier a 3-1 lead before intermission, as the Trevians built a 14-6 edge in first-period shots and a 32-15 edge through two periods.

“I thought we did everything right,” New Trier forward Danny Balz said. “We went down (1-0) but we didn’t let it change the way we play. We didn’t stop.”

Papalas struck at the 12:19 mark of the second period to give the hosts a 1-0 lead. Papalas won a puck behind the New Trier goal, bringing it back and firing from point-blank range, and then burying the rebound in a crowded goalmouth. John Mulvey and Carter Erickson got assists on the play.

“To that point, we were playing pretty good,” Glenbrook South coach Jim Philbin said. “We had some trouble clearing some pucks out but we were getting it done. It was a good game but then those three goals in three minutes killed us. We couldn’t recover from that.”

South’s 1-0 lead held for roughly six minutes before Chessen tied the game with his 20th SHL goal of the year, at the 5:54 mark on a perfect feed from defenseman Will Cusick. Cusick battled his way up the boards on the left side into the offensive zone before finding Chessen out front for a shot that South goalie Lucas Winger had no chance at saving.

“Cusick is probably more offensive than you want as a ‘D’, and sometimes you can hear me yelling at him to stay back,” Bidwill said. “But he picks and chooses his moments. And if he didn’t jump up, we don’t get that first goal.

“We were taking a lot of perimeter shots and once we started activating our ‘D’ a little bit more, and they were jumping in on plays, that opened things up a little more for us.”

Less than 30 seconds passed before Hawkins scored what ultimately held up as the game-winning goal. A face-off on South’s end started the play, and a shot from distance by defenseman Hawkins ended it.

“A puck shot back to me off the draw, no one was in front of me, so I just took a slapshot,” Hawkins said. Kitchel Snow got the assist on the game’s pivotal second goal.

“I thought Hawkins had a great game,” Bidwill said. “We put him out there against everyone’s top line, and he got a goal — we’re just asking him to break even, and we’re playing with house money when he also gets a goal.”

It was Hawkins’ fourth SHL goal of the season.

With 2:54 left in the second period, Smith made it 3-1 on Snow’s second assist of the game. Will Kroeger sent a puck into the corner, Snow dug it out out from behind South’s net and skated it back out around the boards before finding Smith for a great look in the slot, and Smith buried it.

And ultimately, New Trier’s 3-minute scoring spree was a tall ask for Glenbrook South to recover from.

“Throughout the night we had moments where we looked really sharp, but New Trier is a team where you just cannot take a shift off or it’s going to end up in the back of the net, and that’s what happened,” Winger said. “And they had more time of possession but it wasn’t like they were giving me shots I couldn’t handle. But all of a sudden we had some mental lapses.”

With a two-goal lead, there can be a tendency for teams to take their collective foot off the accelerator and adopt a more defensive crouch. But that’s not what New Trier does, and they came out after intermission flying high again in pursuit of another goal.

“They’re all good skaters, they have good hands, and they all play relentless hockey,” Philbin said. “They just keep going. They don’t stop hunting and they keep going for pucks. They just kept coming and they came in waves. Credit to Bob (Melton) and Chad (Bidwill) and that team.”

New Trier forechecked hard and kept the ice tilted for much of the first eight minutes of the third period. Glenbrook South battled from there to the final buzzer but couldn’t solve New Trier goalie Drew Durdov and the Trevians’ defense.

Chessen scored his 21st SHL goal with 1:39 left in the game, on a length-of-the-ice clearing shot that deflected before making a long journey into an empty net.

“We started a little slow but I thought we were still pretty much dominating the whole game,” Hawkins said. “I thought we were back-checking hard and we were focused on defense, so the offense just came. I thought (Chessen) played well, like always, (Tyler Smith) battled hard, and (Jayson Rabinowitz), my ‘D’ partner, is always solid.”

With defensemen Cusick and Will Kroeger anchoring the back line in front of two quality goaltenders in Durdov and Dean Lawrence, and an offense that has found its identity, New Trier is playing top-shelf hockey.

“I just love how this team is coming together at the right time,” Bidwill said. “They’re hustling, working, practicing hard, guys on the bench are being loud, and our captains are leading. Everyone played pretty well and our top line is buzzing. Balz, Walker, and Chessen are just firing on all cylinders, moving the puck, and they don’t care who scores.”

Game 1 of the SHL tournament finals will take place Sunday at 4:00 p.m. at the North Shore Ice Arena in Northbrook.

“It’s going to be a fun series,” Balz said. “They have that one line and since we’re at home we’ll have that first change and that will help a lot so we can match up. They also like to dump the puck a lot so we’ll have to be ready. They’ll be good, hard, competitive games,”

Philbin’s message to his team after Tuesday’s loss was clear.

“We just said ‘it’s over, your SHL season is done, and now we move on to state’,” Philbin said. “What we took away from this game is that you have to play hard all the time. We gave up playing hard, and lost guys, and it cost us. Moving forward, we can’t do that. We have to have three full periods, every shift, to come out on the other side and be the winner of that game.”

GAME NOTES:
New Trier
The distance New Trier has traveled since September in its growth has been obvious to all involved.
“Starting the year we looked scary, and not in a good way,” Hawkins said. “But the development has been great. Through all the tournaments and hard practices, we’ve gotten better and better throughout the year. I think the whole year we’ve been on a good incline and the end of the year is all that matters, and it’s here.”
After Tuesday’s win, Bidwill was about the high energy New Trier brought to the third period with a 2-goal lead that can sometimes breed complacency during a game.
“I think that’s part of who we are as a team. Our philosophy is to not turn off the gas,” Bidwill said. “That’s not our personality. We’ll try to get that next goal and if (an opponent) scores, whatever, but to change our approach would just be detrimental to what we try to do, so just keep playing, keep moving, and keep the foot on the gas.”
The numbers: in four SHL playoff games vs. Carmel and Glenbrook South, New Trier posted a 167-72 edge in shots and a 17-5 scoring edge; in four games against Glenbrook North and Saint Viator, Loyola posted a 141-96 edge in shots and a 14-9 scoring edge.
In their four games, the Trevians have been led in playoff goals by Chessen with five, followed by Smith (4) and Snow (2), and one goal apiece from Rabinowitz, Cusick, Owen Walker, Jaden Sauer, Henry Miller, and Blake Faulkner.
Loyola’s Jack Gustafson has led Loyola with five goals in four playoff wins, including two game-winners in two overtime games against Saint Viator. The Ramblers also got two playoff goals apiece from Garet Grady, Ryan Boersma, and Max Gabal, and one apiece from Nicholas Malaniuk, Will Schreiber, and Keaton Lillybridge.

Glenbrook South
Winger was named the SHL Player of the Year this season, and was away on a college visit when he found out.
“(Glenbrook North’s) Owen Just texted me congratulations and I was like ‘for what?’,” Winger said. “I was honestly blown away by it. It’s just an honor. I thought (Jack) Gustafson from Loyola was going to get it.”
Philbin is happy that he’ll have juniors and all-SHL players Winger and defenseman Owen Almburg back in the fold next season. Winger won Player of the Year based on SHL coaches’ voting.
“(Winger) gets a lot of respect from the other coaches in the league because they see what he does and how hard he works,” Philbin said. “To get the accolades he’s getting in the league is pretty amazing because there’s obviously a lot of stiff competition.
“And Almburg is just a hard-working kid and a great teammate on and off the ice. He leaves it all out there and he’s a great captain.”
Philbin was also honored by being named SHL Coach of the Year this season.
“My favorite thing about him is his passion for our team,” Winger said of Philbin. “It’s the time and effort he puts into it. He shows up to the rink, he’s always ready, and he does extra things outside of our practices and our games. He’s scheduling things for us, making sure everyone’s ready, and doing anything any of us need. He always says it’s a brotherhood and he truly means that.”
Philbin will have to guide South’s brotherhood through a formidable opening game against SHL rival Carmel in the state tournament.
“That’s not a sweet sixteen opener. That’s a really tough game to be in,” Philbin said.“That first line they have plays a lot and those guys are good players. They’re a threat all the time on the ice, Herubin and Stensrud have a high majority of their points, and we have to shut them down.” 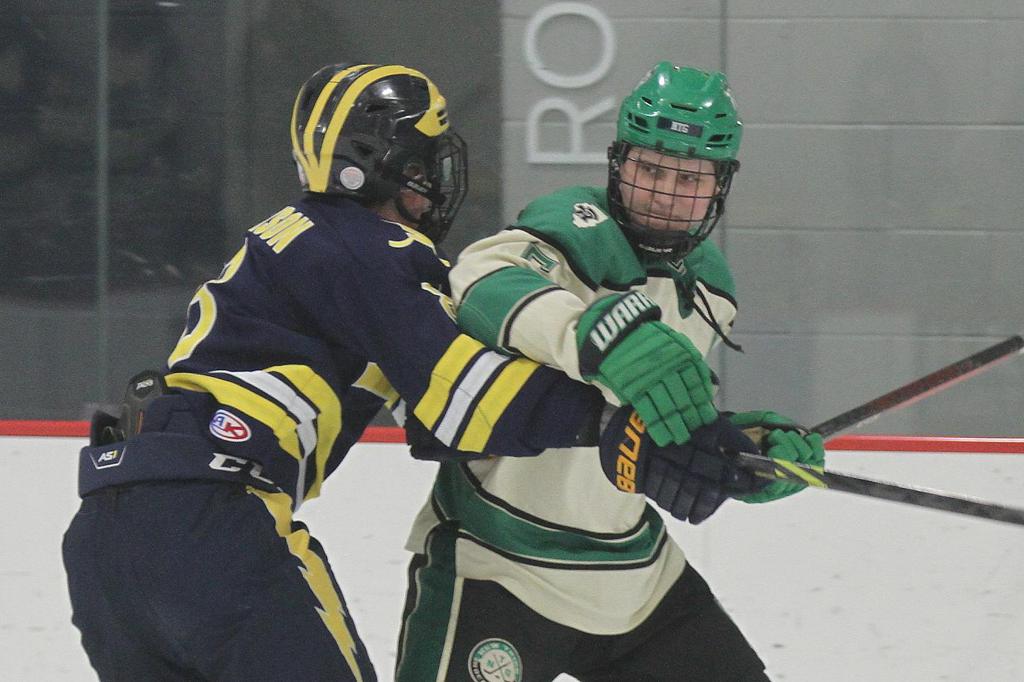 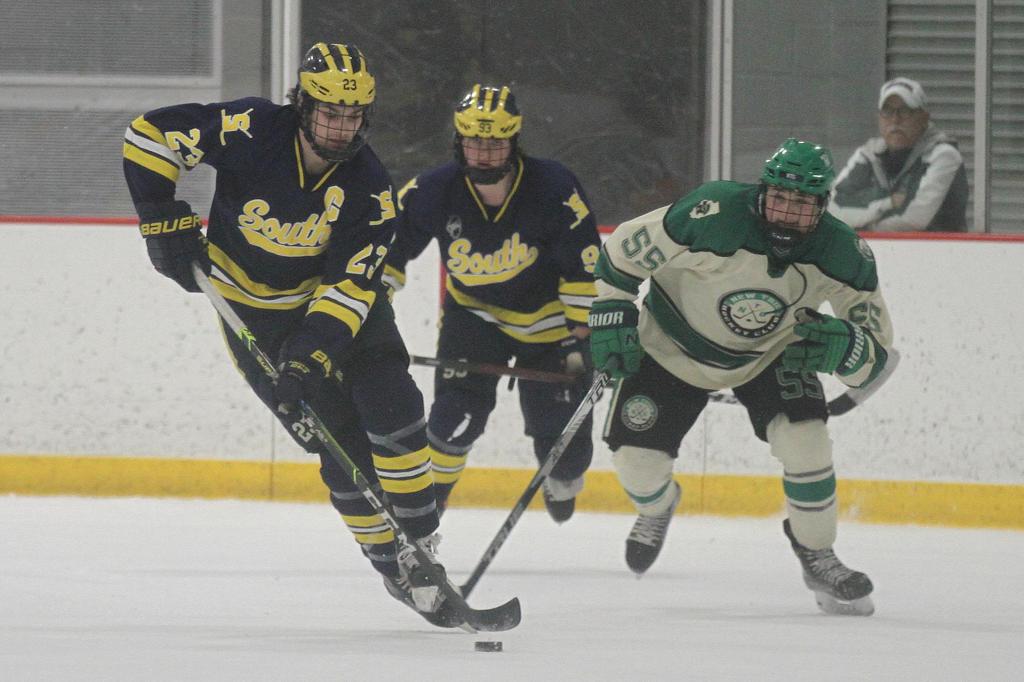 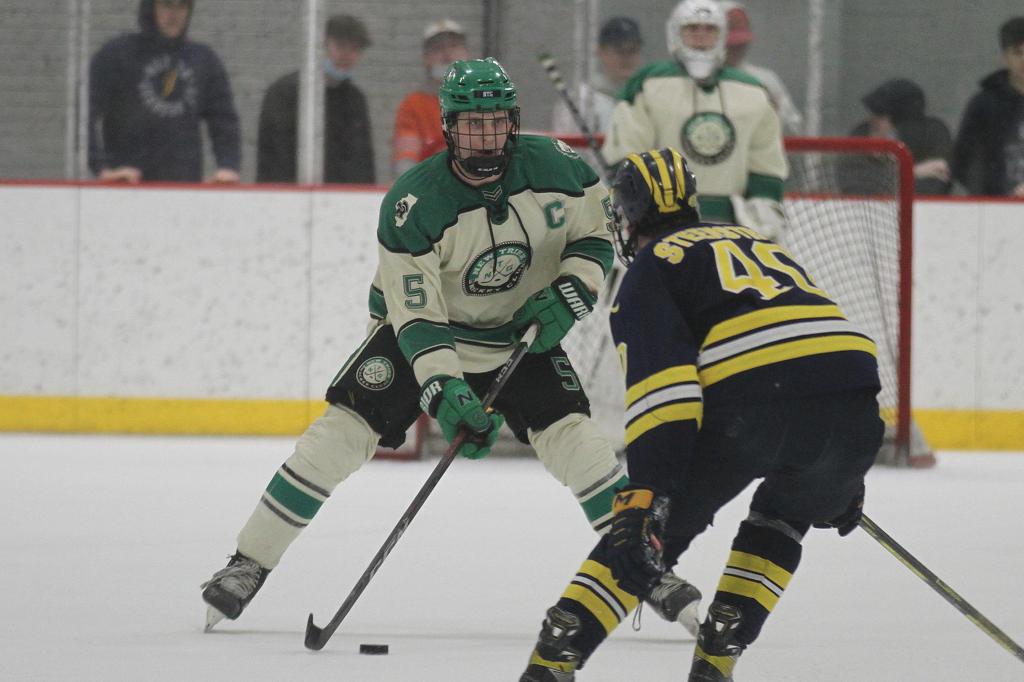 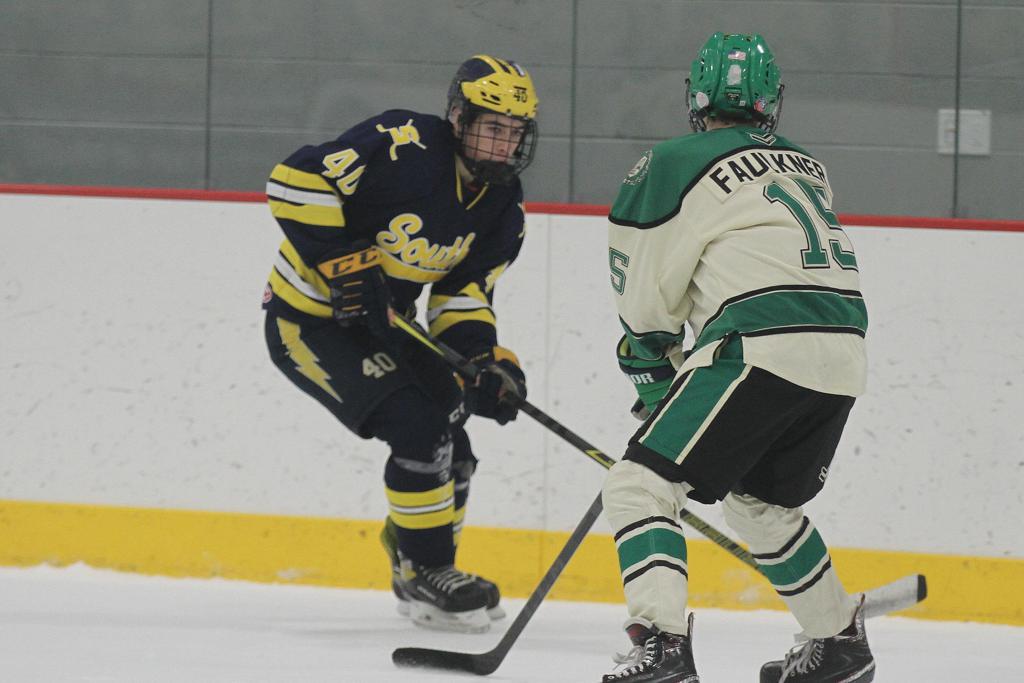 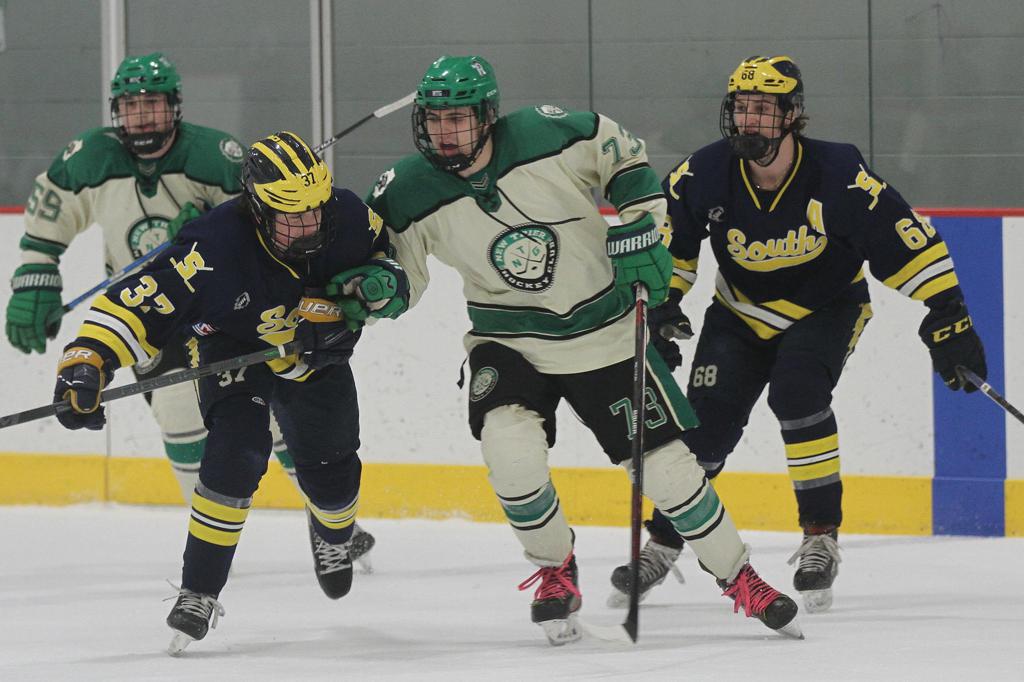 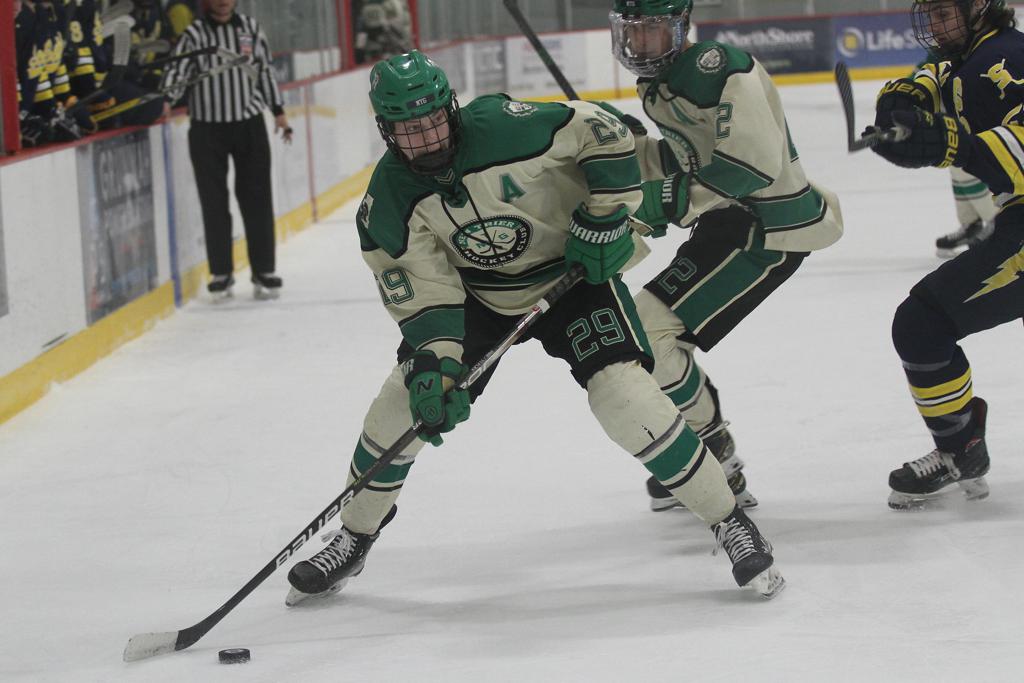 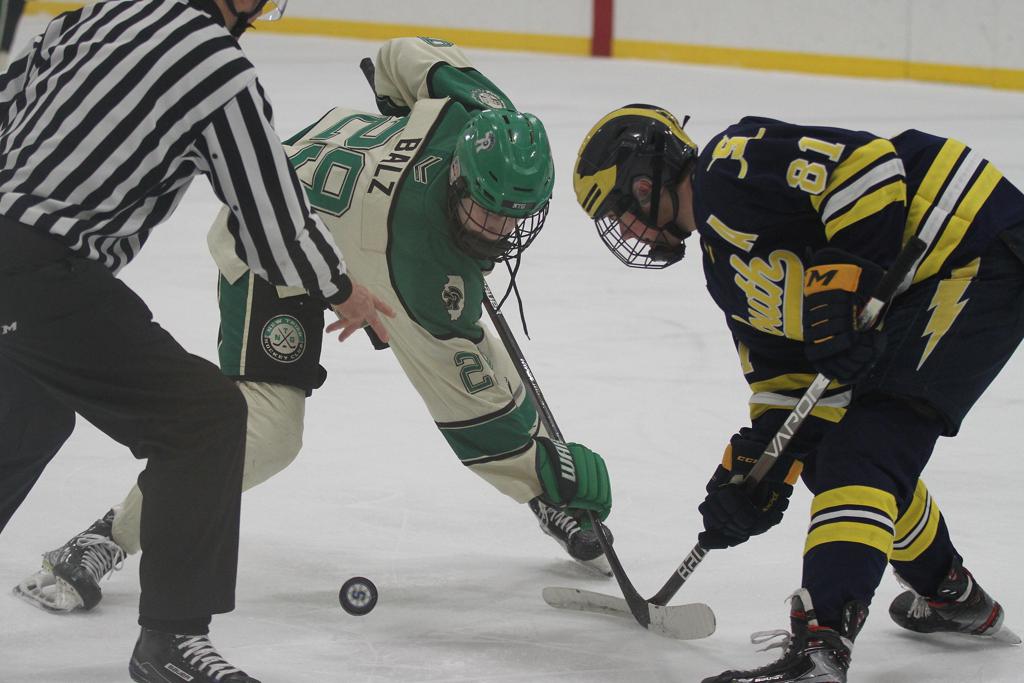 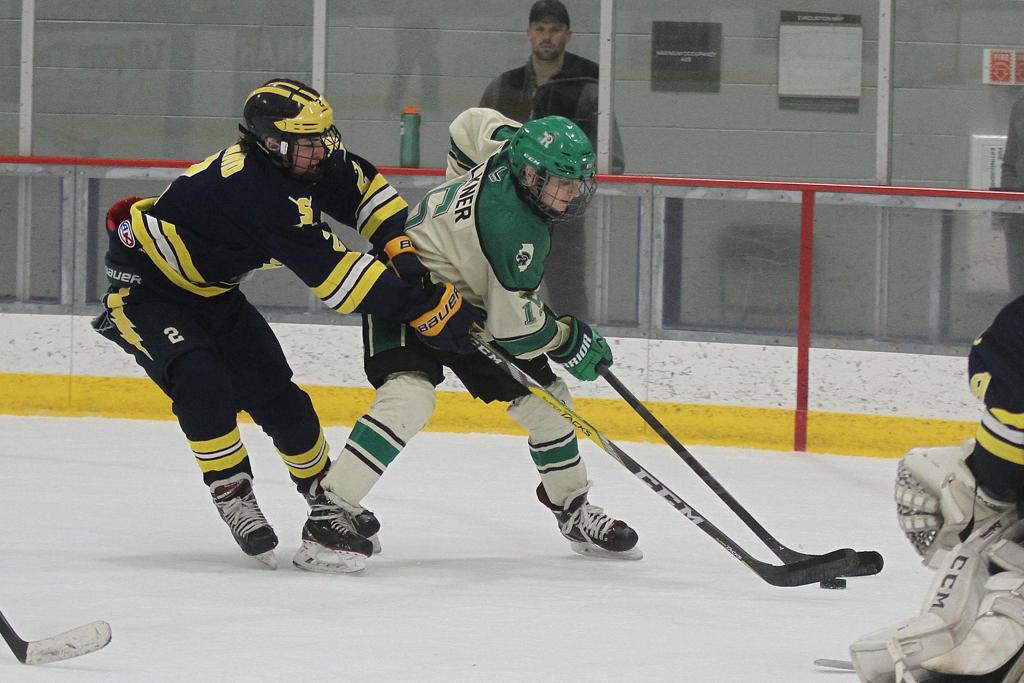 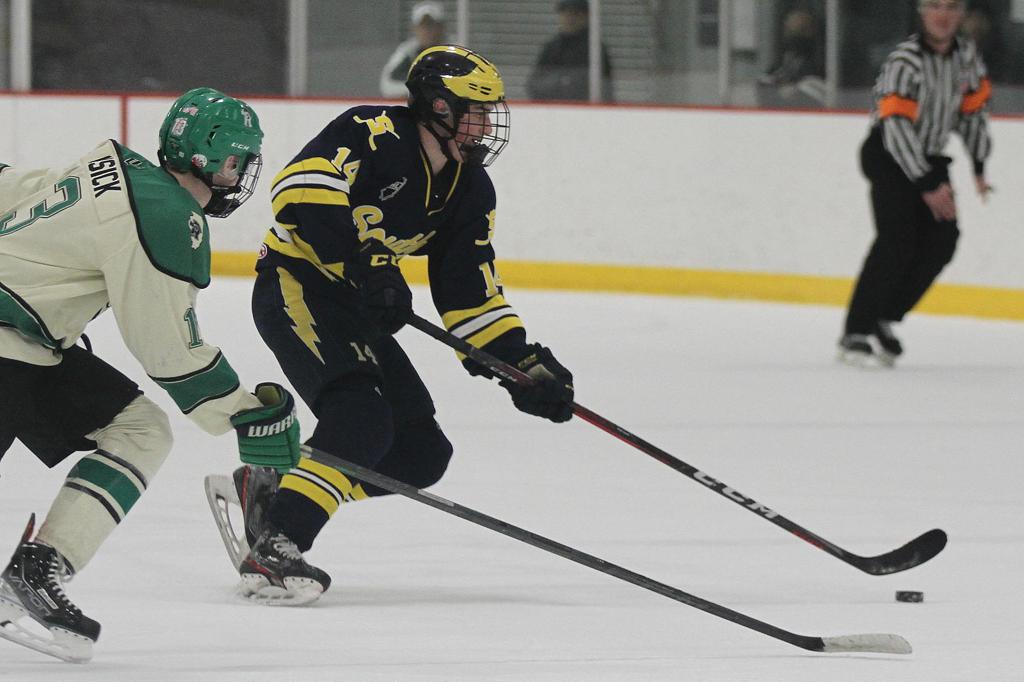