MOUNT PROSPECT -- With the puck on his stick in overtime at Saint Viator, from the boards on the right side, Loyola’s Jack Gustafson looked up.

“I didn’t see much. I saw a bunch of blue (jerseys) on me and I had to make a few moves,” Gustafson said. “It ended up working out.”

A few moves that worked out? Gustafson’s understated description didn’t do justice to the spectacular way he deked and cut his way through and around three defenders, on an angled dash to the net, before letting fly with a shot.

“I saw a clear net so I just put the puck on net,” he said. “I saw I had a clear angle and just decided to put it far side.”

Saturday’s goal gave Loyola a 4-3 win over Saint Viator, sending the Ramblers to the SHL finals against the winner between New Trier and Glenbrook South. It was the fourth time this season that Loyola beat Saint Viator in overtime.

Playing its third game in three days and its fifth in seven days, Saint Viator was pure grit and heart from the outset. The Lions struck first when Reiden Mueller streaked behind the defense, cut to his right in front of the net and then went to his backhand at the 5:39 mark of the first period.

The Lions went on the power play late in the period and Patrick Neary buried the first of his two goal at 2:53 to give Viator a 2-0 lead. Mueller fired a shot from the high slot that Neary redirected in front for the score, with Will Minarik also assisting on the play.

To that point, the Lions were keeping to the script that coach Tim Benz wrote for them.

“We didn’t let up and that was our game plan,” Benz said. “We had to get a lead because if we went down it was going to be tough to crawl back, especially on short rest. We kept the pedal down.”

Team captain Mueller was clear on what his Lions did well through two periods.

“The little things,” Mueller said. “We weren’t overextending shifts, we were getting pucks deep, grinding and working. We knew it was going to come our way if we just did that.”

Saint Viator posted a 12-8 edge in shots in the first period before a scoreless second period saw Loyola begin to pick up steam in posting a 17-10 edge in shots.

Down 2-0 at intermission, there was no panic in a Loyola locker room full of players who have shown third-period resilience all season long.

“We knew if we got one early we could start coming back,” Gustafson said. “It was just confidence because we’ve come back a lot this year. We thought if we kept skating we could wear them out because they’ve had three games, back-to-back-to-back.”

Just 14 seconds into the third period, Loyola struck; Garet Grady stole a puck and crossed it from the right side with Max Gabal rushing the far post, and Gabal buried it. Gustafson also earned an assist on the play.

“It happens in practice all the time,” Gabal said. “It was a great look and it was all (Grady). I just finished it. We just wanted to get as many shots as we could. We’re a third-period team and we’ve proven it every time we’ve been down.”

Loyola tied the game at the 12:51 mark on a Will Schreiber goal in the slot, off a centering feed from Keaton Lillybridge.

The Ramblers took a 3-2 lead less than one minute later on the power play. Ryan Cowen fired from the high slot and Ryan Boersma scored on the redirect, with Grady also credited with an assist on the play.

And just like that, with little more than five minutes gone in the third period, Loyola had turned a 2-0 deficit into a 3-2 lead.

“I thought we were bad in the first period and we have to fix that because you can’t have bad periods in do-or-die games,” said Loyola coach Scott Ciraulo. “The second period we picked it up and I wished that period didn’t end because we had some momentum, but we were able to carry it into the third and get a couple quick goals.

“I was extremely confident in the way we were playing at that point. It was one of the best periods of hockey we’ve had this season.”

Saint Viator wasn’t done; with one minute left in the game, Benz pulled goaltender Mike Massaro. That move paid off when Tommy O’Neill fired from the point on the right side and Neary was there to clean up the rebound to tie the game with 24 seconds left.

Benz was glad to see Neary rewarded with his second goal of the game.

“He’s not flashy. He’s just grit and hard work,” Benz said. “He’s going through a wall for his teammates no matter what he’s asked to do, and that’s one of the reasons he’s one of our captains, too.”

Less than four minutes into a 10-minute overtime period, Gustafson ended the night with his 29th goal of the season.

“Everyone just wanted it,” Gabal said. “We bought into the process and gave it all we had. We don’t have anything tomorrow so we just gave it everything we had. Viator played great and it was a great game. I’ve played a lot of games with those (Saint Viator) guys, they’re some great guys, and they really gave us a challenge.”

In addition to the SHL finals, the Ramblers begin state tournament play on Saturday against the winner between Naperville North and Neuqua Valley.

Saint Viator will get some much-needed rest before opening state tournament play Saturday against the winner between Oak Park and River Forest and Highland Park.

The Lions feel like they’re playing their best hockey at the exact right time of the year.

“I’m absolutely nothing but proud of the boys,” Mueller said. “We’ve had a rough week with five games in seven days but we buckled down and played some good hockey.

“The confidence and energy is high. This (loss) burns and hurts but we’ll get right back at it.”

GAME NOTES:
Loyola
Gabal’s goal was his 9th of the season.
“Max is very physical, he’s a big body, and he has one of the best shots on the team,” Ciraulo said. “We’ve just to get him to use it more but he’s really important. He really solidifies that line.”
Gabal is ready to embrace his post-season possibilities as a scorer.
“That’s something I’ve struggled with this year, producing points, and I know that,” Gabal said. “But I like to think I’m a playoff guy so maybe I’ll step it up right now.”
Gustafson is savoring every minute he has left in a Loyola uniform.
“Especially as a senior, I’m really enjoying it,” Gustafson said. “Hopefully we can keep winning and keep it going. We have a lot of guys who know what it was like last year winning it. I was lucky enough to be one of those guys so we kind of told them what we needed to do,”
Saint Viator
Asked who has been shining during the Lions’ postseason play and Benz was quick to answer with the following names: Sean Wilson, Ty Schafer, Carsen Hart, Jake Knieling, Paul Carney, and Jack Kuffel.
“They’re some unheralded guys whose names, if you tossed them around the league, guys wouldn’t necessarily know who they are,” Benz said. “They’re defensemen and they have been doing their job, shutting down the middle of the ice, getting pucks out, and blocking shots.
“And Reiden is our captain, a three-year guy, and the kids would go through a wall for him. Heck, I’d go through a wall for him. He sees everyone’s best defensemen and best centers, night-in and night-out. He’s one of the seniors who has really stepped it up in these last two games against Loyola.”
Mueller was especially happy to see Neary get paid off for his effort all season with a pair of goals against Loyola.
“He’s been playing his heart out,” Mueller said. “He does whatever he’s told and doesn’t think twice about it. He’s a great teammate and one of my best friends.” 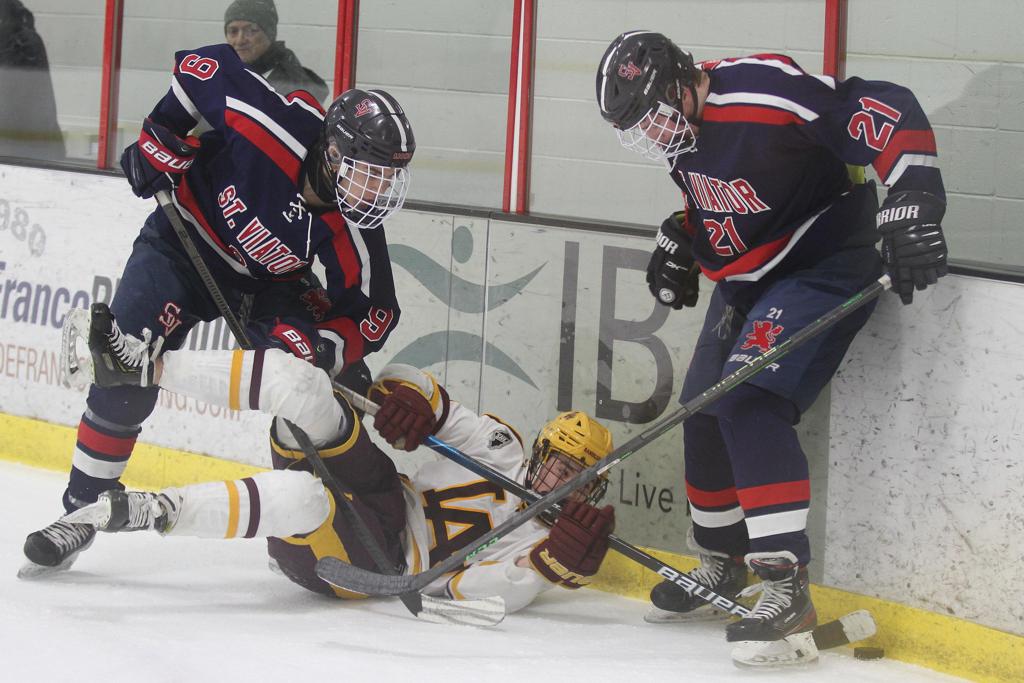 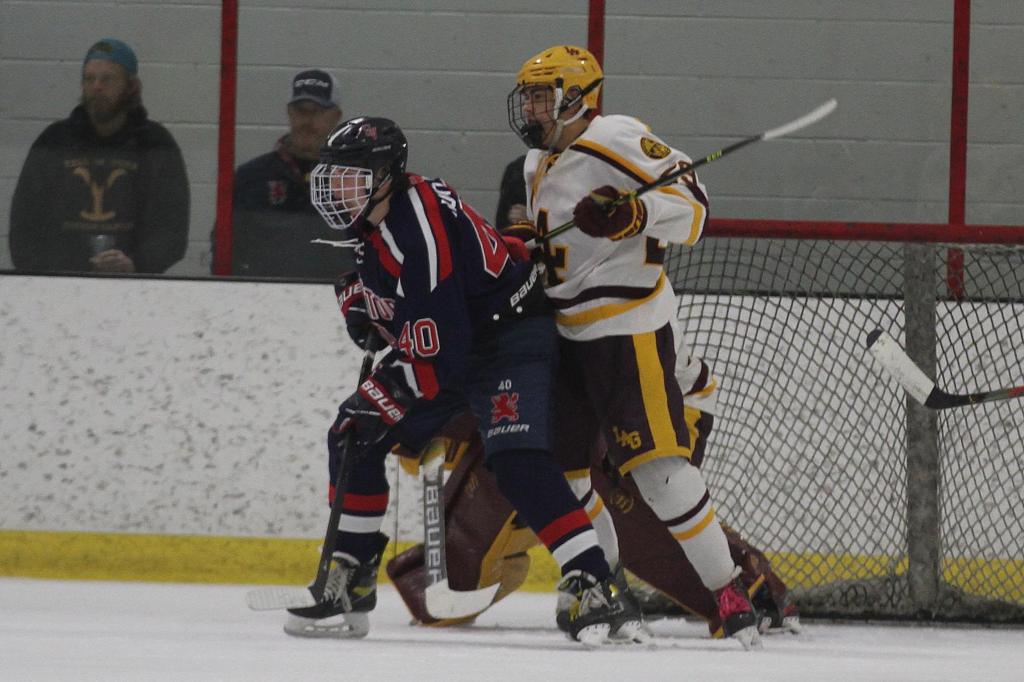 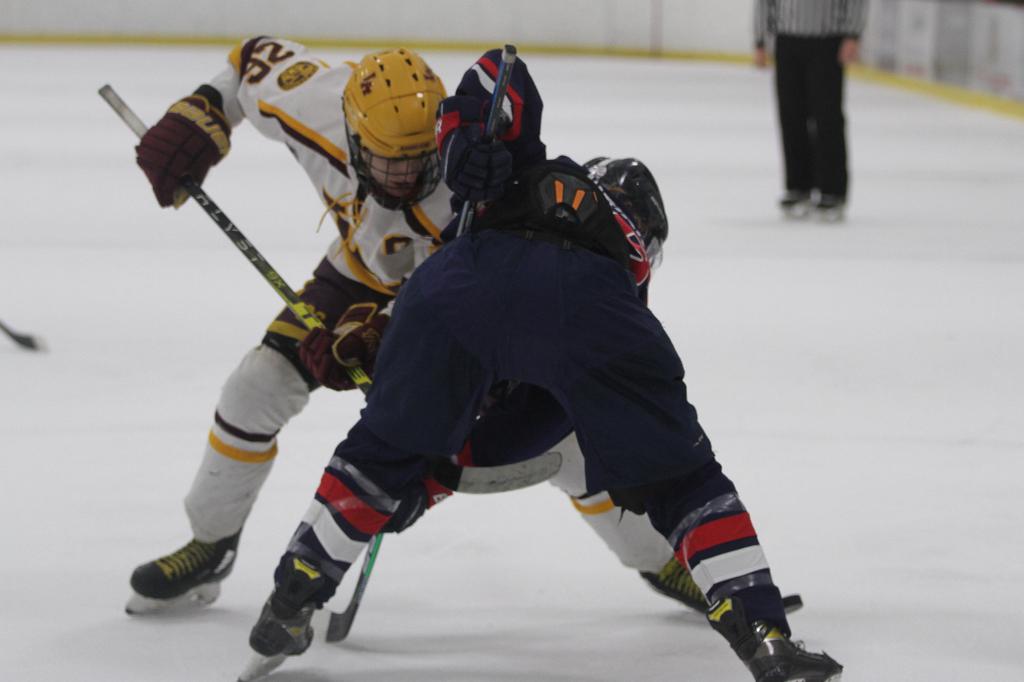 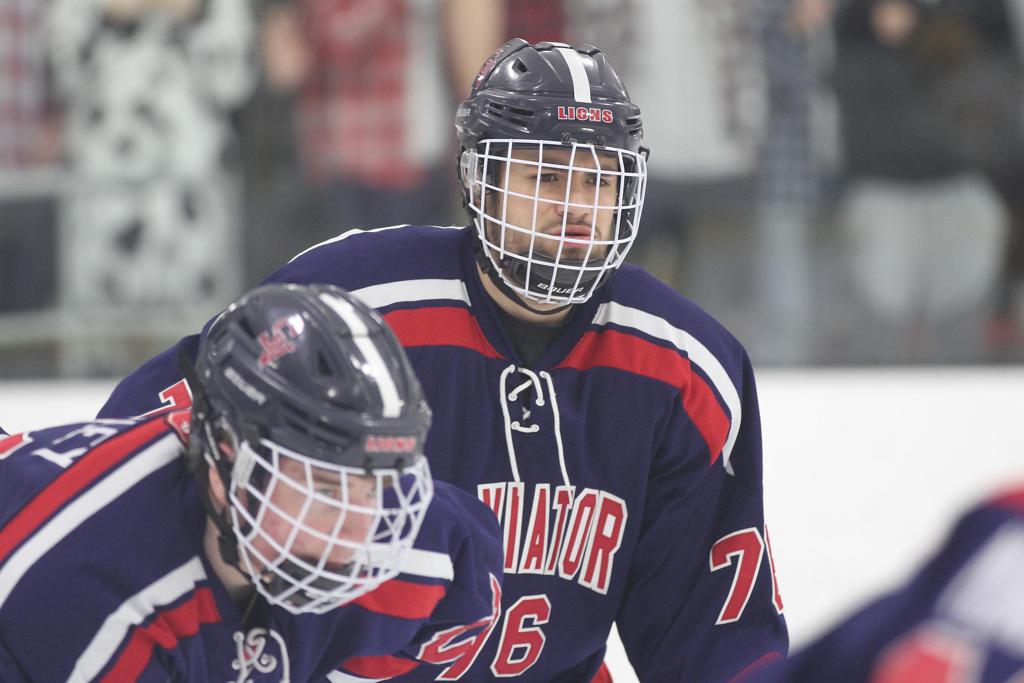 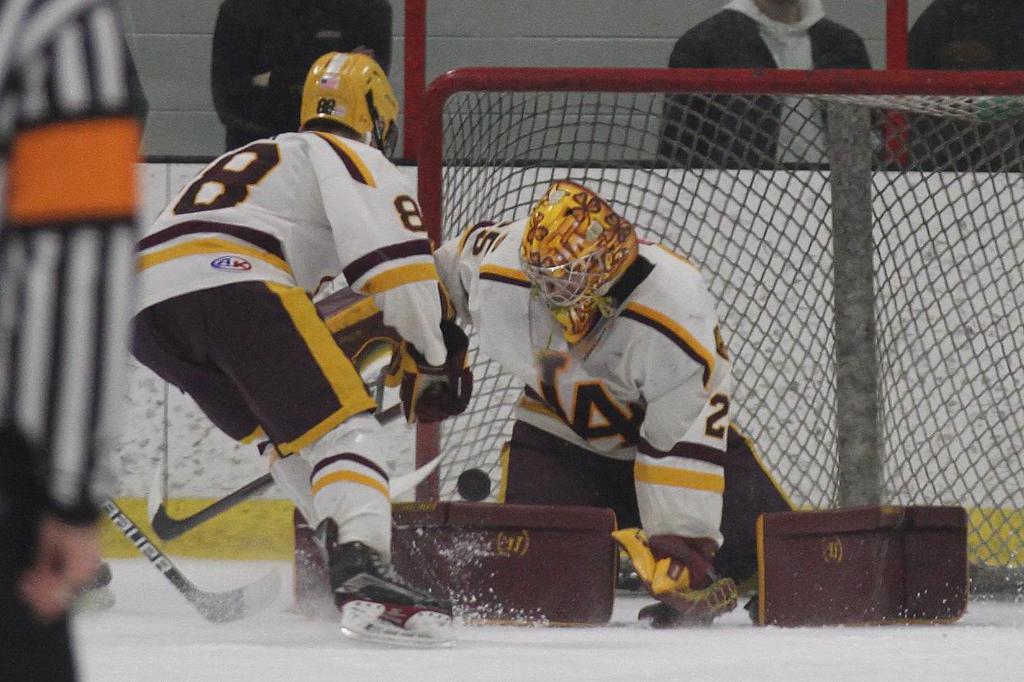 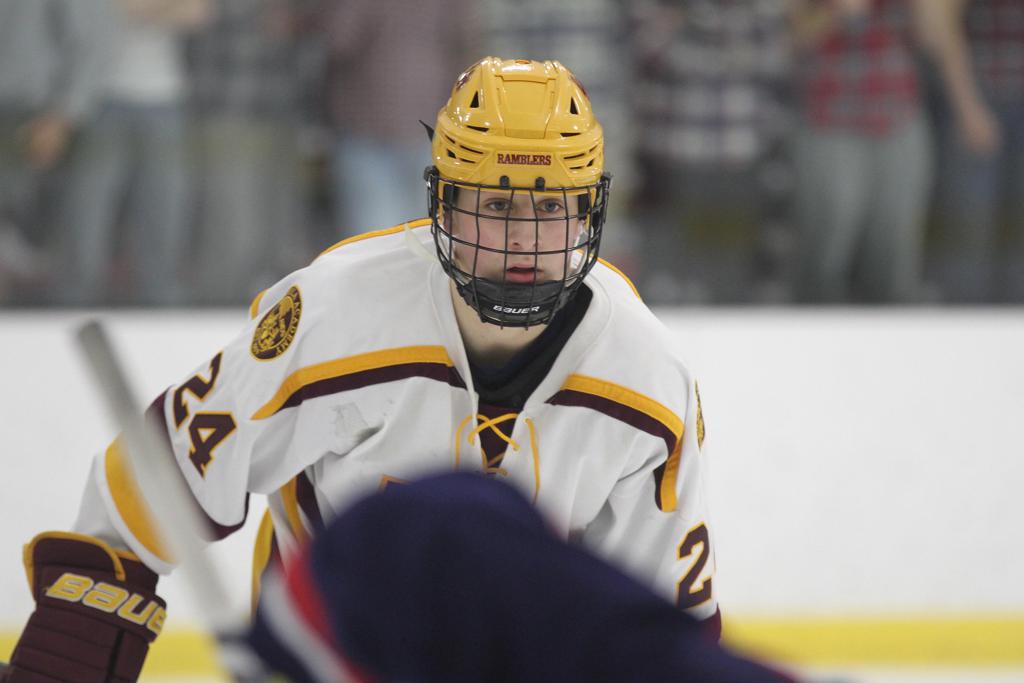 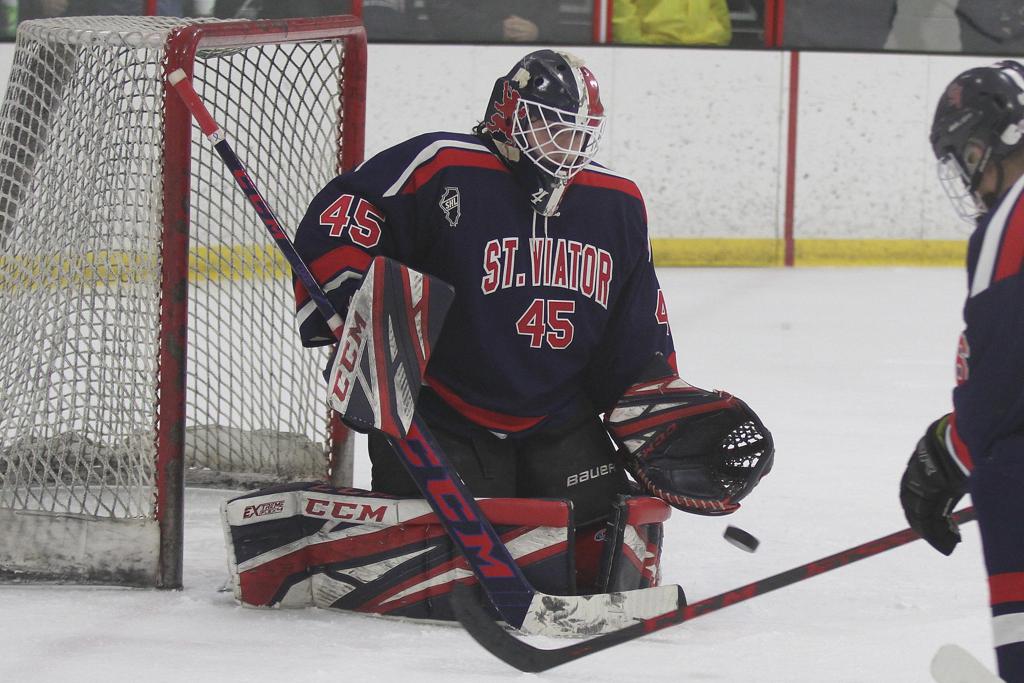 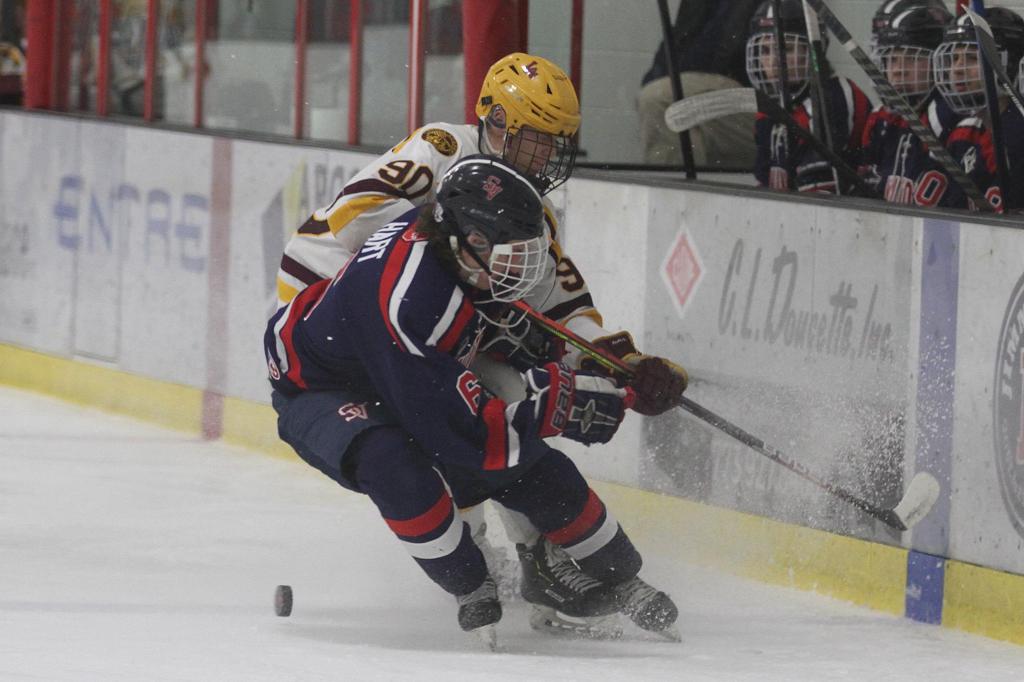 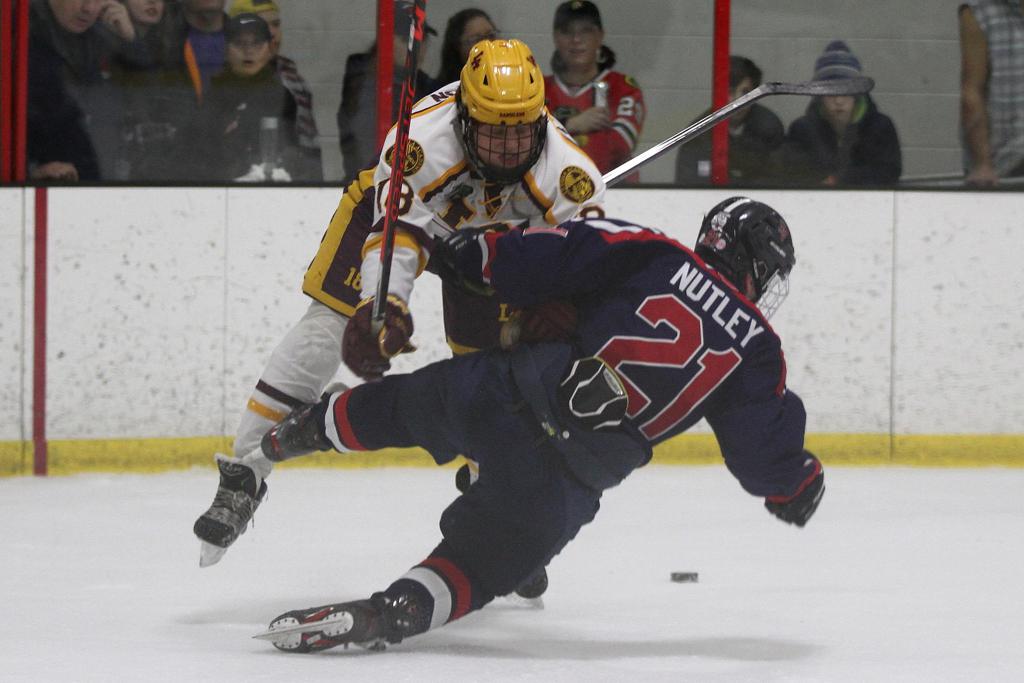 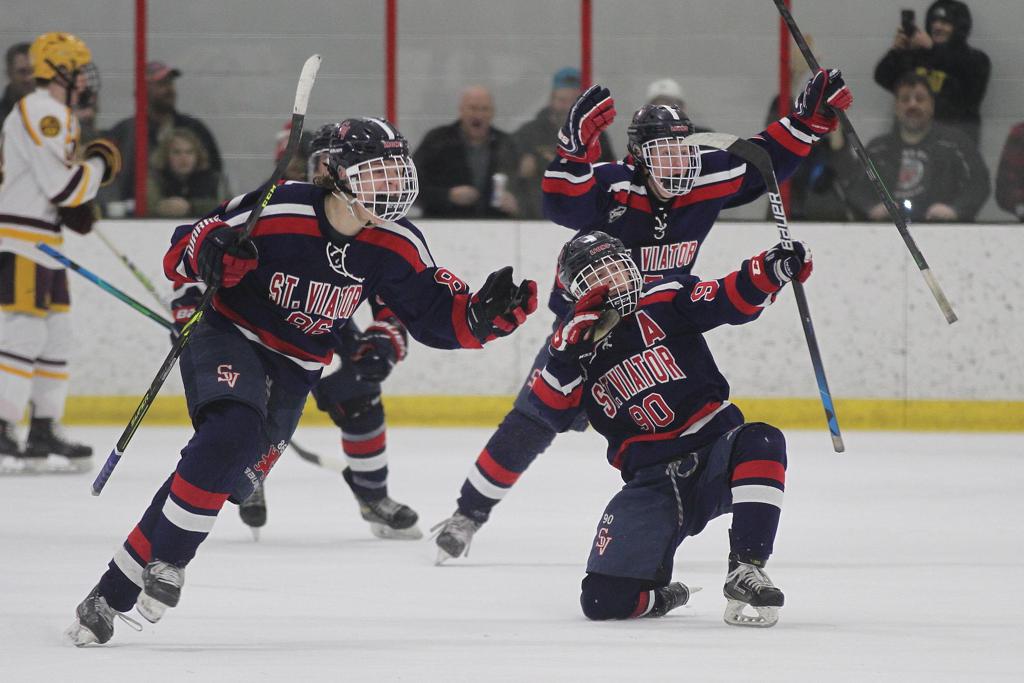 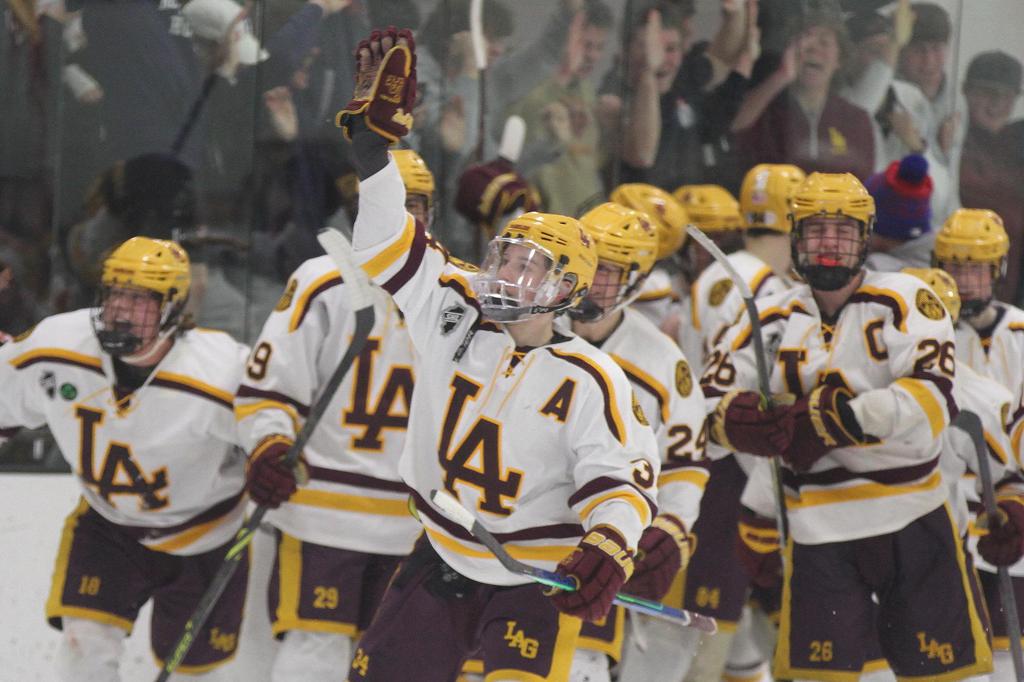