Less than 30 seconds into a Game 3 overtime at Stevenson, after a wild 3-3 tie played out through three periods, Ban found himself deep on the left side with a sharp angle staring him in the face.

The converted forward just did what South coach Jim Philbin asked his guys to do in overtime: put pucks on net. Ban’s shot found its way past a few bodies on its way inside the upper-ninety at the far post to end the game and give Glenbrook South a 2-1 series victory.

“All season long I’ve just been trying to put the puck on net. Most of the time I’m not trying to score, I’m just trying to put it where the goalie will have a hard time making the save,” Ban said.

The puck had eyes and Ban quickly tipped his hat to a teammate for making things difficult in front of the Stevenson goal.

“It was a hell of a screen in front by Brad Southwood and lucky enough for me, I just put it in the right spot,” Ban said. “It went in, we won the game, and it was a nice team win.”

But Game 3 between third-seeded host Stevenson and sixth-seeded Glenbrook South can’t be reduced to one shot. The SHL rubber match had a short-handed goal, a penalty shot, tying goals scored by both teams, and a see-saw game with no shortage of hard play, skill, smarts, and physicality throughout.

“Stevenson’s a great team and it was an unbelievable game,” Glenbrook South coach Jim Philbin said. “Credit to our boys for hanging in there and it was just going to be who was going to get the last knockout punch. But it was all heart from both teams.”

Stevenson defenseman Nolan Jones approved of the effort his side put forth but saw the difference boil down to one universal element: execution.

“I thought we played good. I just think they had a game plan and they executed it better than us,” Jones said. “Teams watch the film and know how to beat us. They trap us, stop us on the rush, so we have to outwork them. We’re a rush team and teams know that.

“The effort was there but I don’t think we did what our coaches wanted us to do. We have to execute our game plan. And Winger played phenomenal this whole series. Without him it’s a different series.”

That would be Luke Winger, Glenbrook South’s goaltender, who came up big whenever he had to, particularly in the third period.

“Winger stood on his head,” South captain Will Papalas said. “Obviously he’s a super talented goalie and he showed in this series that he’s ready to play and give it all he’s got. We’re seeing how much impact he can have on the ice.”

Winger turned away a shot taken from the slot by Spencer Harman at the 10:50 mark but Stevenson hit pay-dirt at 9:43 when Brandon Schultz buried his 11th goal of the season, on assists from Ethan O’Gradney and Cam Schneider. It was Schneider’s 22nd assist of the season.

Winger and Adler gloved shots from Zach Meyers and Ban, respectively, and Winger saved a shot from Brody Stokes with seven minutes left in the first period.

Glenbrook South tied the game at 5:13 when Mason Dolby netted his first goal of the season on an assist from Ban.

Stevenson pressured hard down the stretch of the first period but the 1-1 tie held. The Patriots fired 11 of their 26 shots in the game in the first period of play and Glenbrook South knew what needed doing heading into the second.

“They’re just a great all-around team and they’re a big, physical team so you’ve got to make sure you play with them for all three periods,” Ban said of Stevenson. “The big thing for us is that we have to crash the net hard.”

Neither team found many scoring chances to the 13:00 mark of the second period, which ultimately saw Stevenson post a 7-5 edge in shots. Winger and Adler both stood firm for the next eight minutes against a handful of quality scoring chances.

At 5:27 of the second period, South’s Owen Almburg did exactly what Ban talked about, scoring on assists from Ban and Zach Freimuth.

“A shot went off the post and Almburg crashed hard. If you keep playing good, hard hockey the puck is going to bounce your way eventually,” Ban said.

Papalas struck less than 30 seconds later, re-directing an Adrian Sokol shot into the goal to give South a 3-1 lead.

There were only two penalties whistled all game, and when Glenbrook South went on the power play with 3:56 remaining in the second period, the Titans seemed in control of the period’s waning minutes.

But Stevenson rose to the challenge, getting a shorthanded goal from James Mendelson on assists from Jones and Cam Schneider. With South still on the power play, the Patriots were poised to tie the game when they were awarded a penalty shot, but Winger stopped Mendelson to maintain his side’s 3-2 lead.

Stevenson came out flying to start the third period and tied the game when Spencer Harman buried a rebound at 14:35.

“We battled back,” Jones said. “We got down two goals but we didn’t get down on ourselves and we stayed positive on the bench. We worked hard and every game we’ve won, we’ve been the harder-working team.”

South began to re-assert itself around the 12:00 mark and from there to the end of regulation a back-and-forth game played out. Ban, Dolby, Almburg, and Finn Boland all found shots for South, while O’Gradney, Dylan Jette, and Brandon Schultz took swipes for Stevenson as both goalies kept things clean.

Ban’s heroics put a quick end to a mandatory 10-minute overtime, sending Glenbrook South to the semifinal round of this year’s SHL playoffs.

“I think we started out slow but as we got more into the game we started playing good, hard hockey, the way we have for most of the second half of the season,” Ban said. “We have a lot of momentum and coming in here and beating a great team like Stevenson — it was a great team win, all around.”

South will play the winner of the quarterfinal series between New Trier and Carmel. New Trier leads that series 1-0 with Game 2 Wednesday at 9:10 at Winnetka Ice Arena. South will aim to continue riding high into the semifinals.

“Momentum is big. It builds confidence,” Philbin said. “And we’ve been playing great since January 1st.” 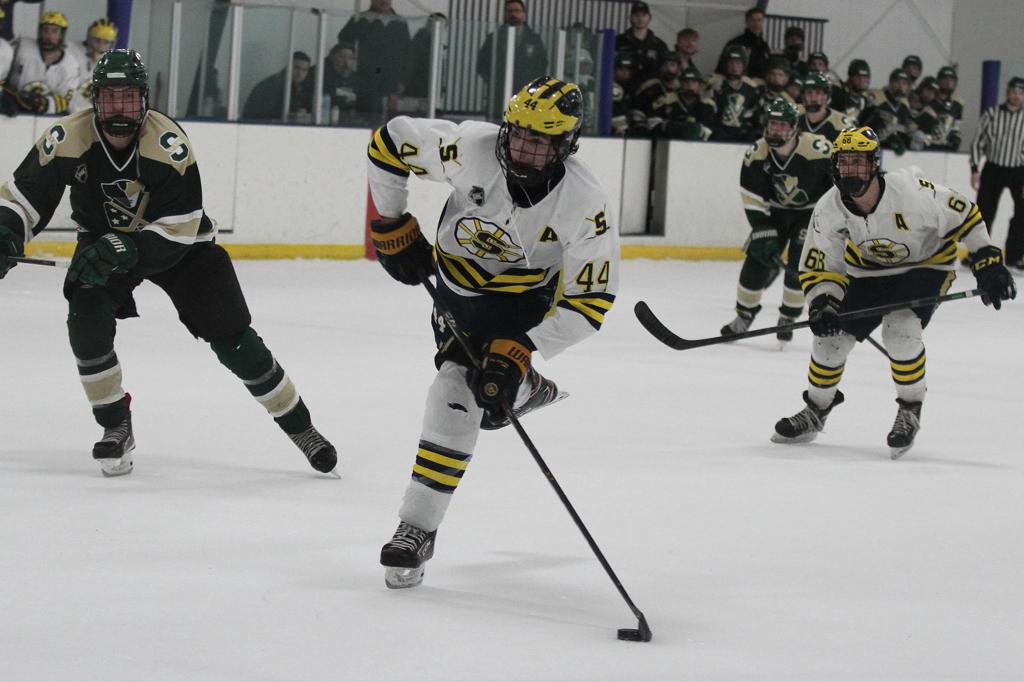 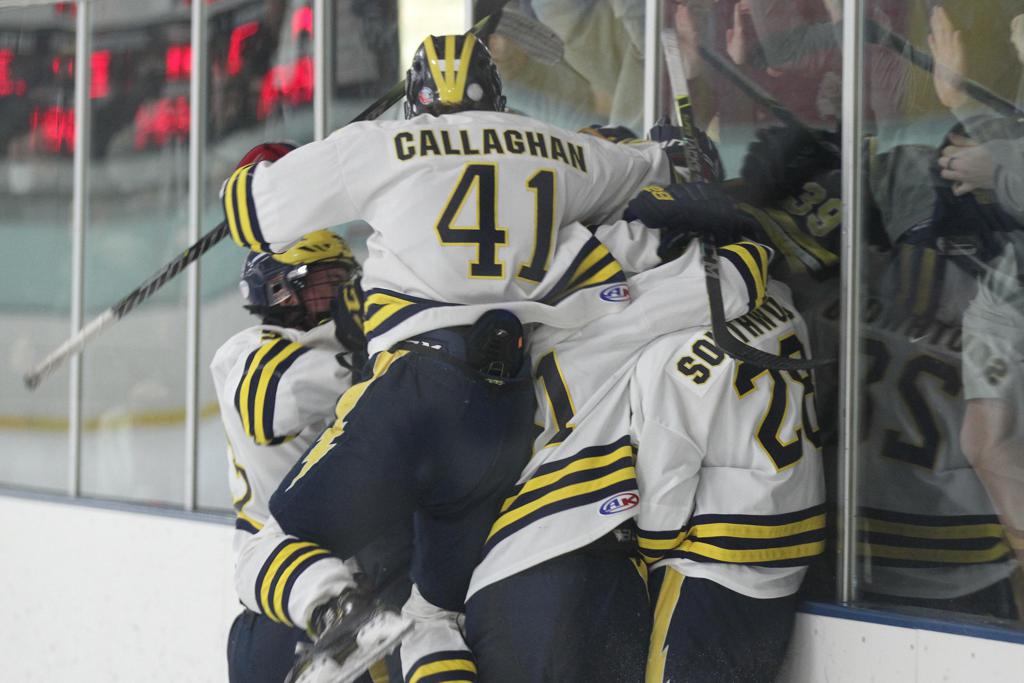 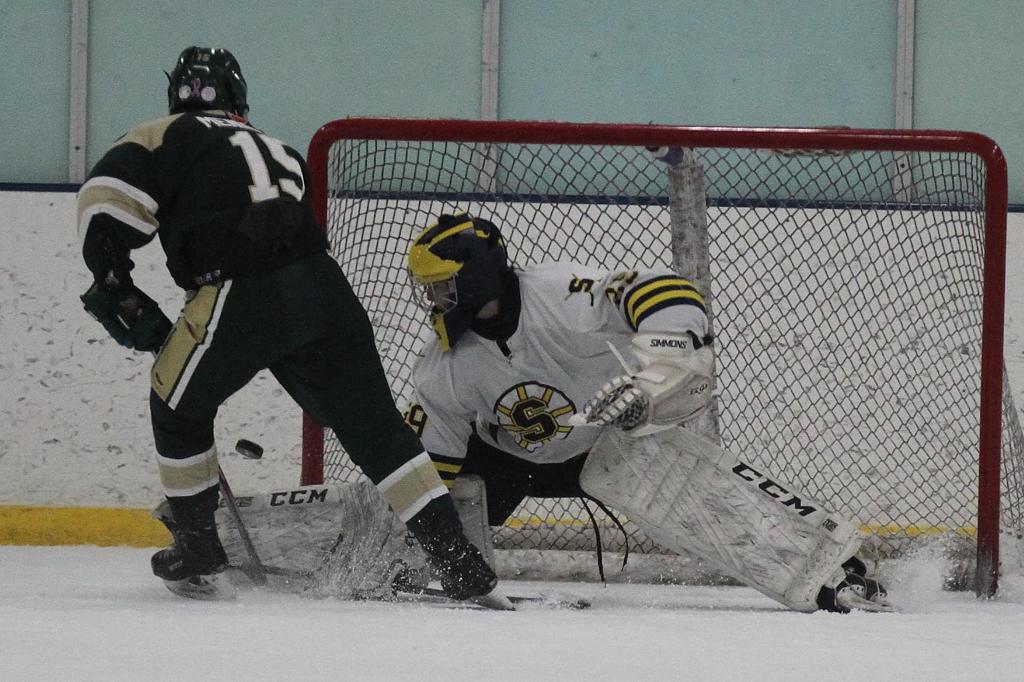 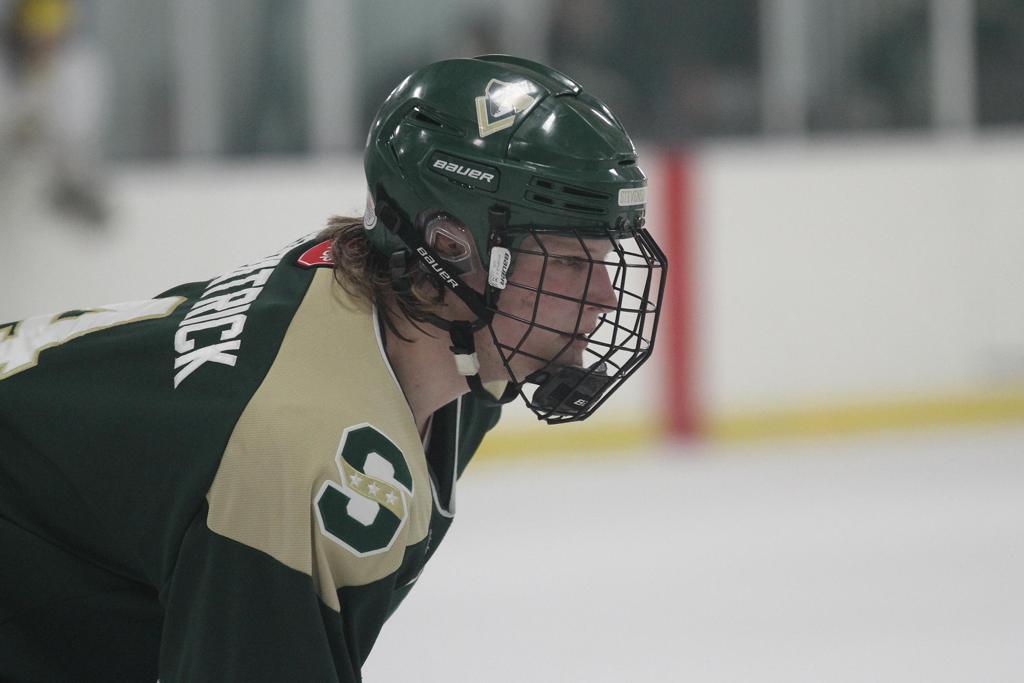 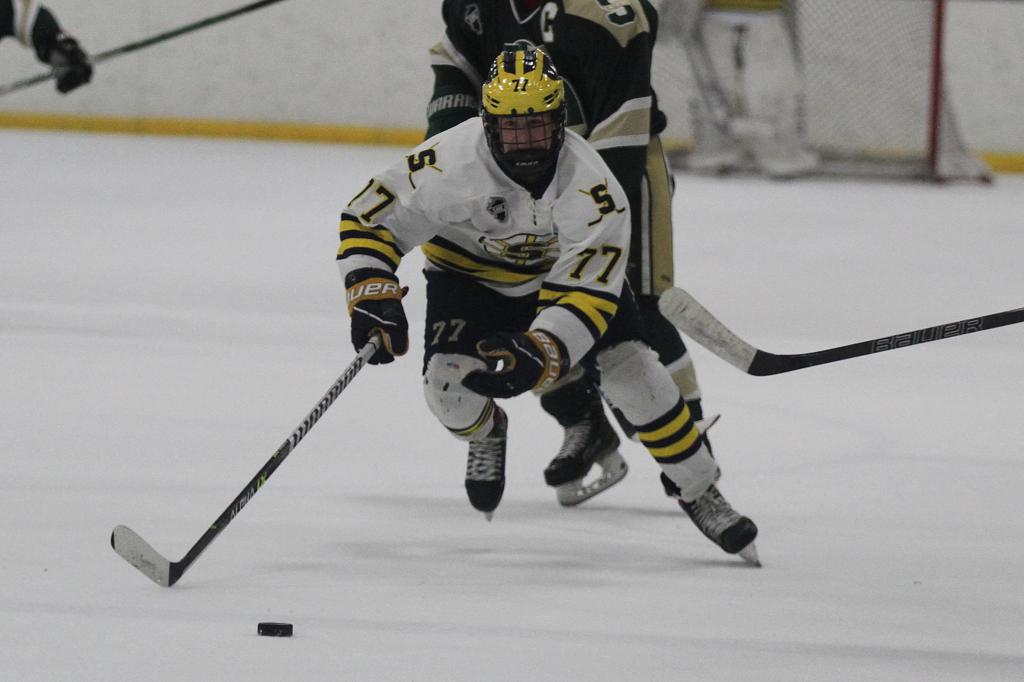 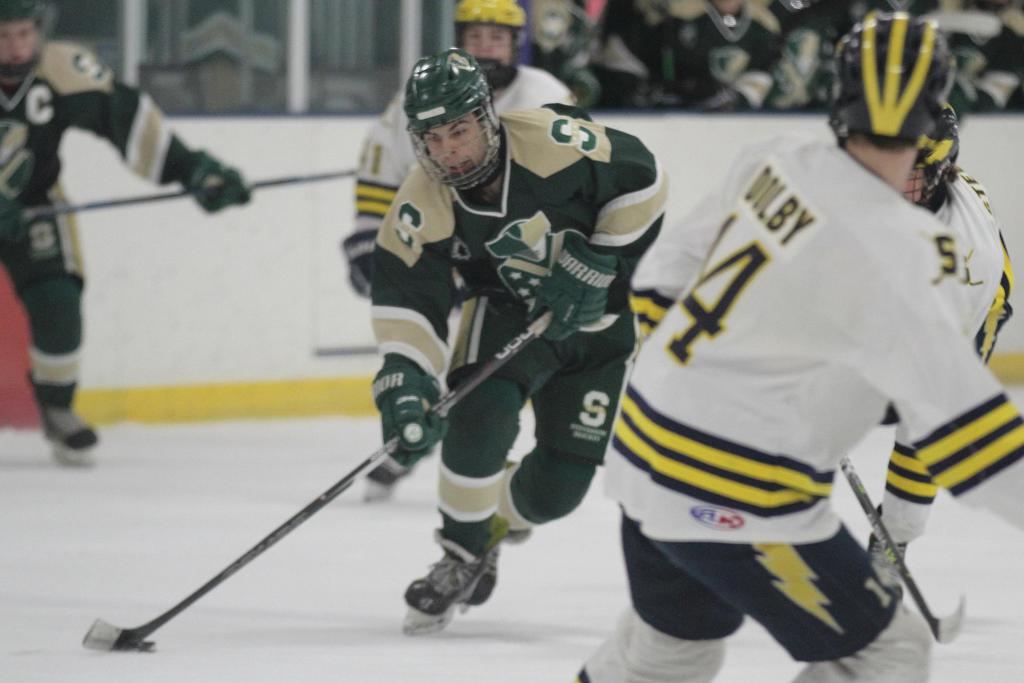 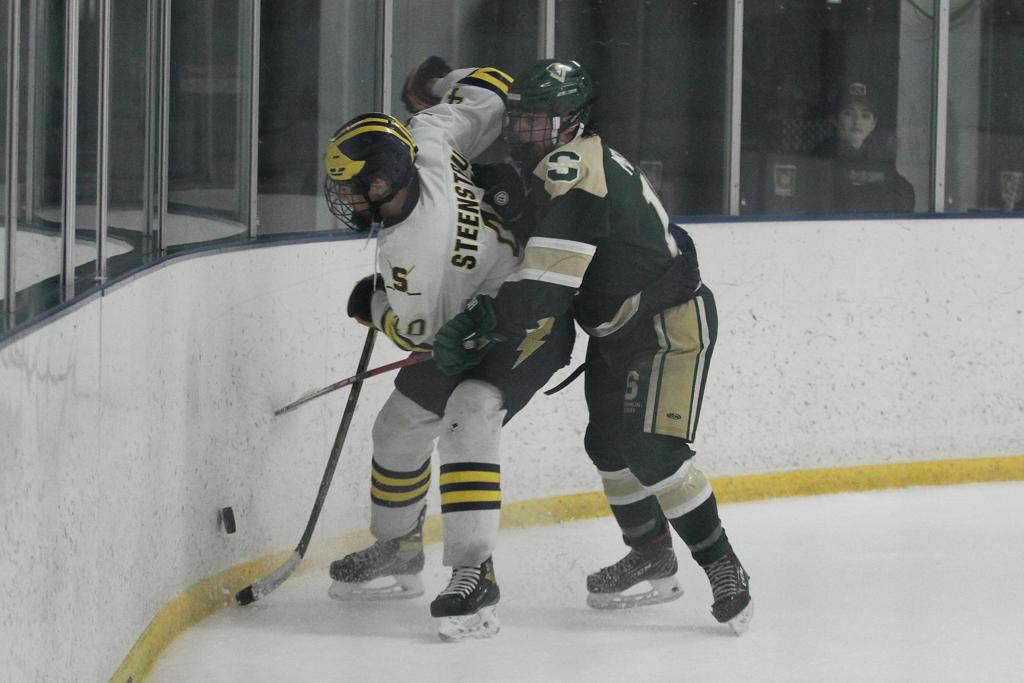 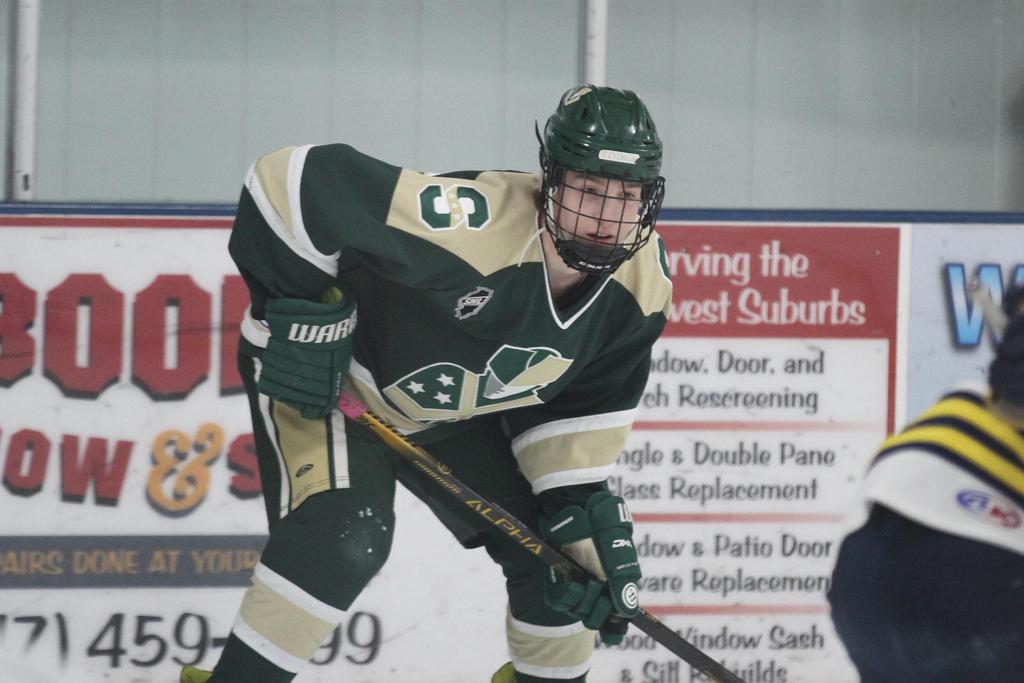