GBS knots the series vs. Stevenson

GLENVIEW -- Corner a dog in an alley and you’ll see what that dog is made of.

There was a lot of fight in every dog, on every line, on every shift for Glenbrook South on Saturday, in a game the Titans had to win to stay alive in its SHL quarterfinal series against Stevenson.

“I loved the effort and the heart tonight,” Glenbrook South goaltender Luke Winger said. “We realized that we needed to work, and we worked.”

Glenbrook South won 6-3 over Stevenson at the Glenview Ice Center, breaking a 3-3 tie at intermission with third-period goals from Finn Boland, Zach Freimuth, and Jason Ban en route to the win.

South’s six goals were the most goals scored against Stevenson in any SHL game this year.

And South’s elevated play to start the game set the tone.

“We were embarrassed with how we played in the first period on Thursday night,” South coach Jim Philbin said. “Stevenson was humming in that first game and we didn’t respond so we said ‘the tables have to be reversed tonight, boys’. Our backs were against the wall.

“They did a great job forechecking pucks, blocking up lanes, board battles, fifty-fifty pucks — they really played great. And six goals is always a good thing.”

The Titans came out flying from the outset, applying pressure and earning an 11-6 edge in shots. Three of Stevenson’s eight penalties came in the first period but they came and went without Glenbrook South able to capitalize.

Instead, Stevenson led 1-0 after a period on a short-handed goal scored by Zack Kulick, on an assist from Cam Schneider with 1:30 left in the period.

Glenbrook South tied the game at the 13:13 mark of the second period on the first of Freimuth’s two goals in the game, with assists from Jackson Hill and Winger. South took a 2-1 lead just 20 seconds later on the power play when Brad Southwood re-directed an Owen Almburg shot, with Freimuth also assisting on the goal.

“To me the big difference in the game is that they came out so energized at the beginning of the game, and we came out flat,” Stevenson coach Tom Wood said. “We battled back and the game was pretty even after that. But throughout the season they’ve played pretty good games against us and just didn’t get a lot of puck luck…but (Saturday) the goals went in for them and that’s just part of hockey.”

Glenbrook South held a 25-8 edge in shots with 10 minutes gone in the second period, with Stevenson goalie Jonathan Adler making some key stops to keep his side within one goal of Glenbrook South.

Stevenson found that equalizer at the 6:12 mark of the second period on the power play, when Cam Schneider scored off assists from Dylan Jette and Will Harlow. Stevenson’s shot frequency picked up from there to the end of the period.

It was a wild final minute that ended the second period. With 56 seconds remaining, Stevenson struck again on the power play thanks to Max Poretto, whose goal on a Zach Meyers assist gave the Patriots a 3-2 lead.

Nine seconds before intermission, Glenbrook South tied the game again when Adrian Sokol’s wrister from the point stretched the back netting, with Freimuth getting his second assist of the game.

“I just liked that we stuck to our game plan and played smart hockey,” Philbin said. “We have two converted defensemen up at forward so we have to play smart and take away lanes against a good skating team. Stevenson is deep and we just kept coming at them.”

The key for GBS in Game 2 was clear to Freimuth.

“Burying pucks,” he said. “We struggled (in Game 1) getting shots on net and getting offensive pressure. But our offense was on fire today. We were clicking on all cylinders, the defense played great, and Winger played great. We played a full team game.”

Stevenson also had to contend with Glenbrook South’s 5-2 edge in power plays through two periods.

“(Philbin) is the best guy, coaching-wise, at matching lines and making it difficult for you. He makes it hard on you. They also played a nice neutral-zone trap against us and that slowed us down pretty well.”

What stood up as the game-winning goal came off Boland’s stick at 13:07 of the third period, on his shot from the point on the right side, with Will Papalas and Erik Steenstrup on the assists.

Each team had a power play that came up empty and with five minutes remaining in the game, Stevenson was still within one goal of tying the game. But Freimuth’s goal at 4:30 gave GBS a 5-3 lead, on assists by Southwood and Winger.

Winger notched his third assist of the game — and the SHL season — with 48 seconds left to play when he found Jason Ban and Ban scored an empty-netter to end the day’s scoring.

“It’s nice to win,” Winger said.“That’s a really good team and we put up six against an all-state goalie. That’s insane We were getting pucks to the net and it’ll take a little bit more of what we did tonight and whoever wants it more is going to win (Game 3).”

Philbin lauded the line of Freimuth, Ban, and Southwood, and the line of Papalas, Steenstrup, and Carter Erickson.

“They played a good game and did their jobs,” Philbin said. “We played a great defensive game, we played smart, and we didn’t give up a five-on-five goal. We’ve got to keep that rolling.”

Wood credited Schneider for a solid day’s work both on the power play and the penalty kill, and he anticipates high energy from both sides in the series-deciding third game, Tuesday at 7:30 at Twin Rinks Ice Arena in Buffalo Grove.

“Two good goalies, two good teams,” Wood said. “It should be a good game. It comes down to how bad you want it, how prepared you are, and the compete level that you have.” 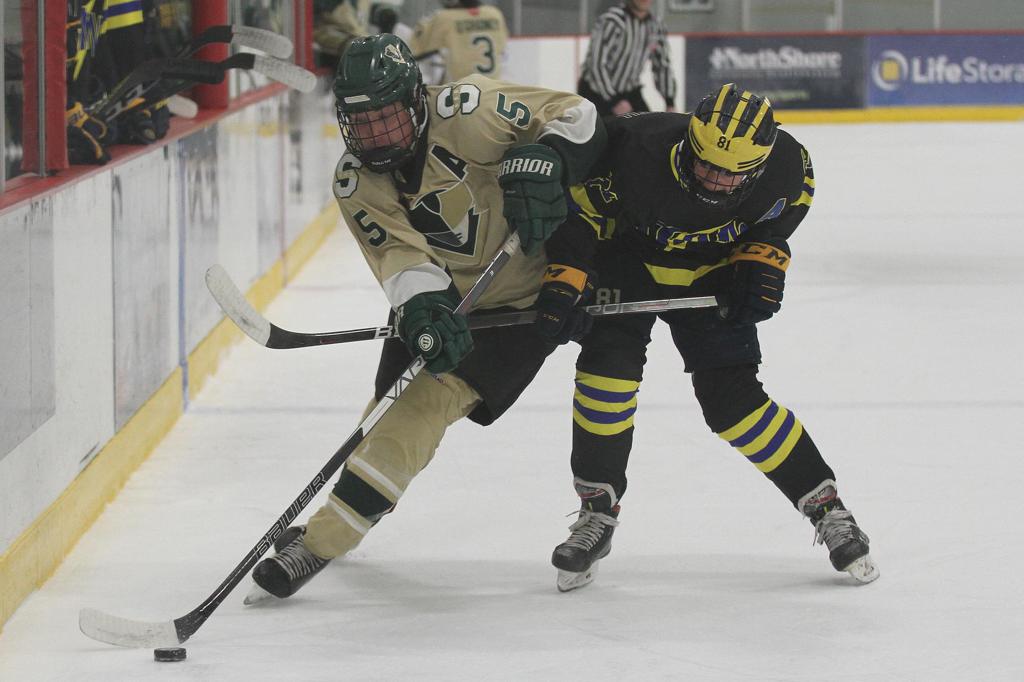 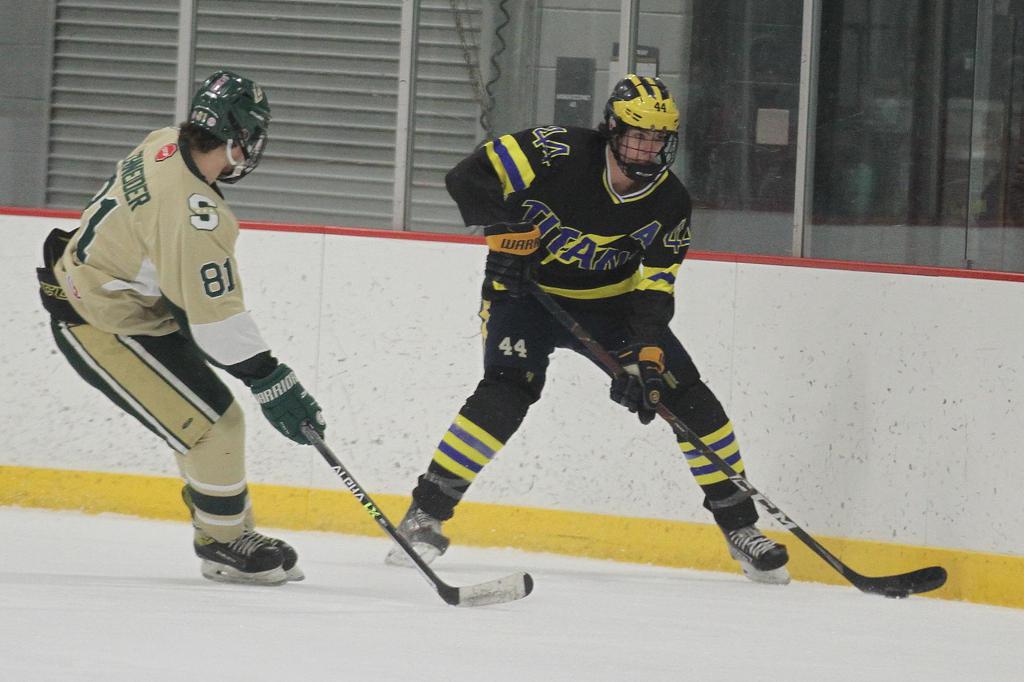 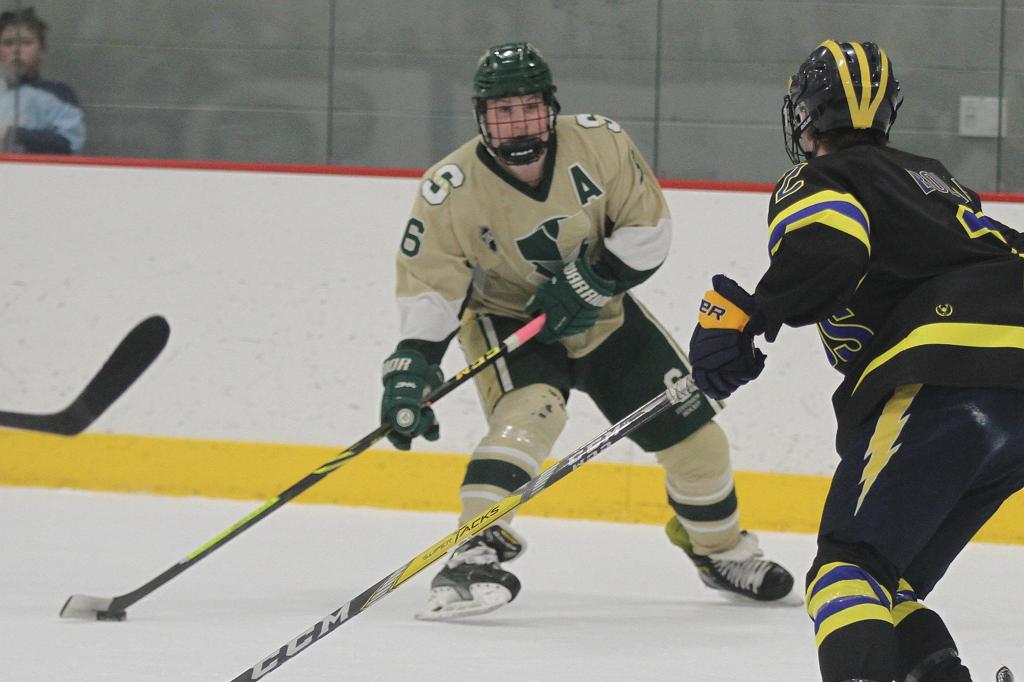 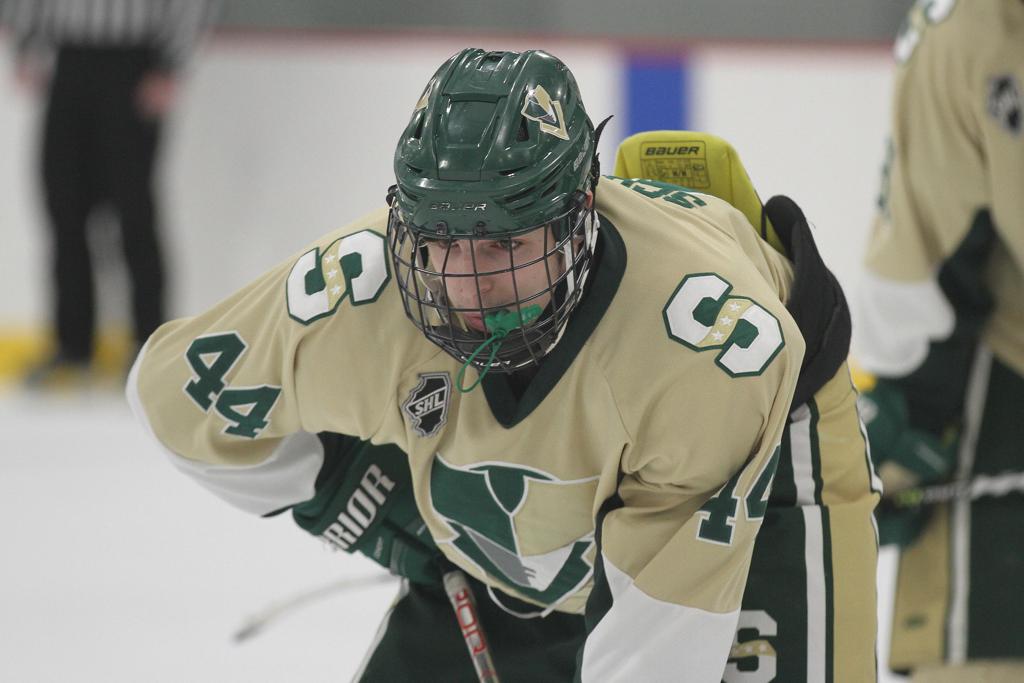 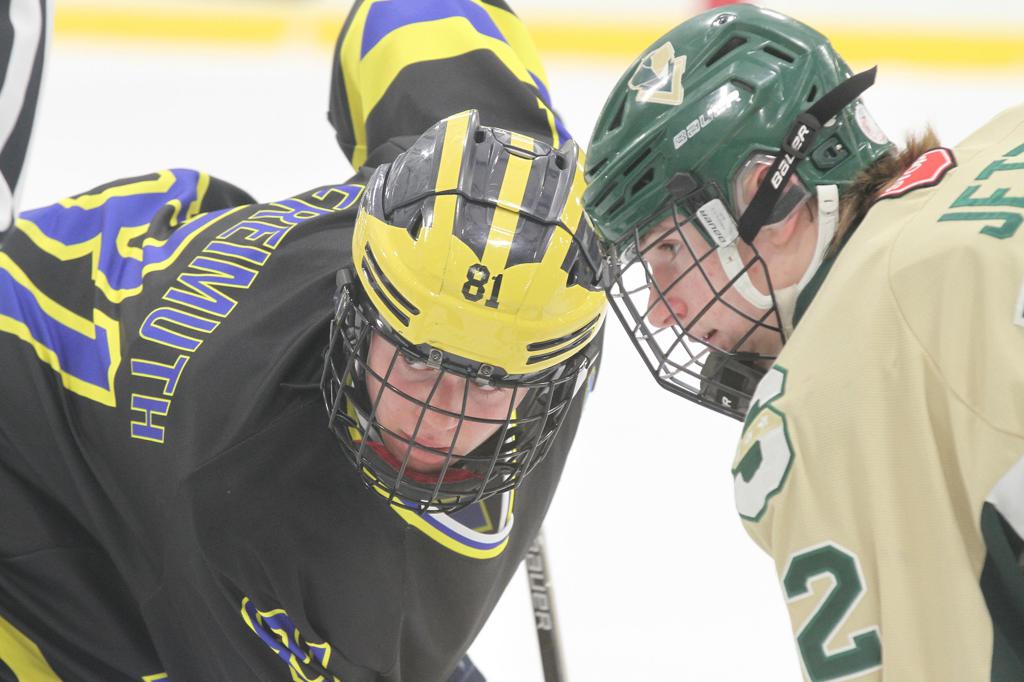 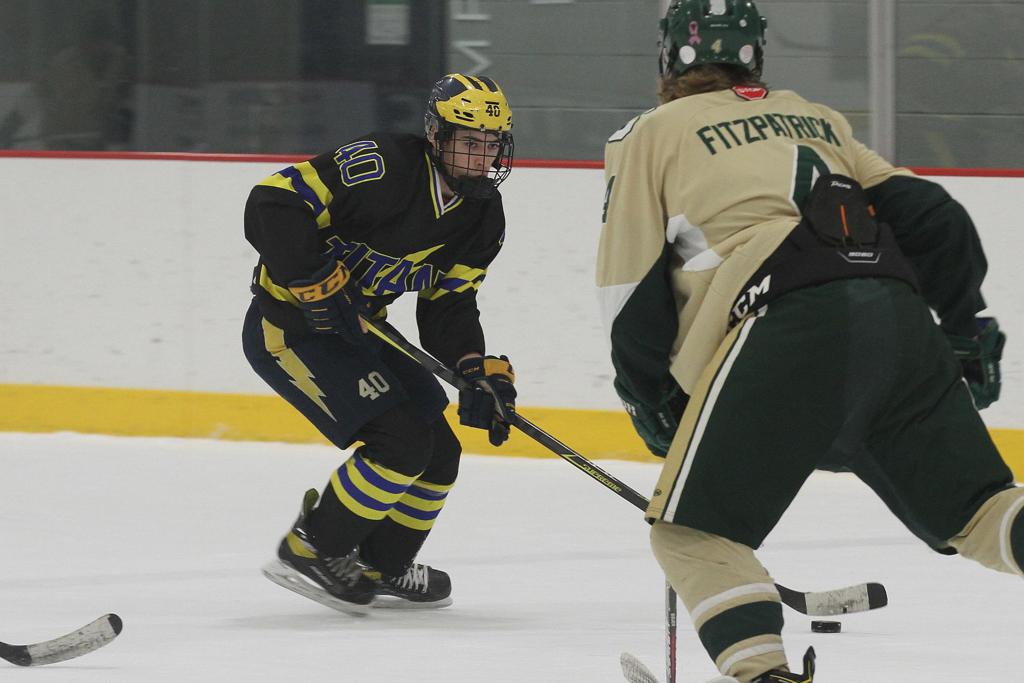 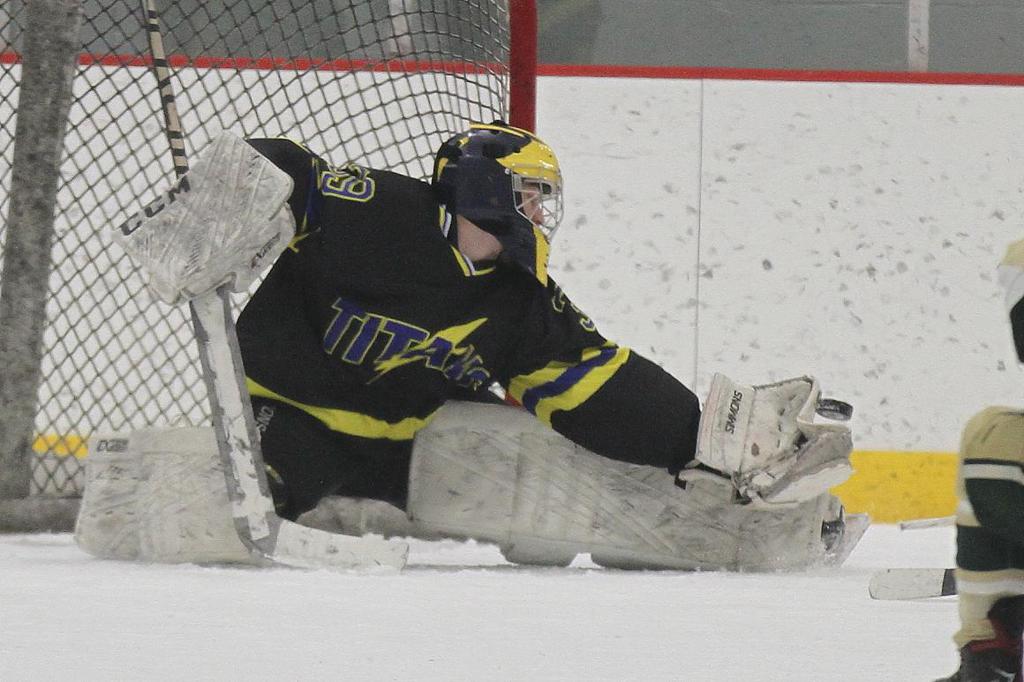 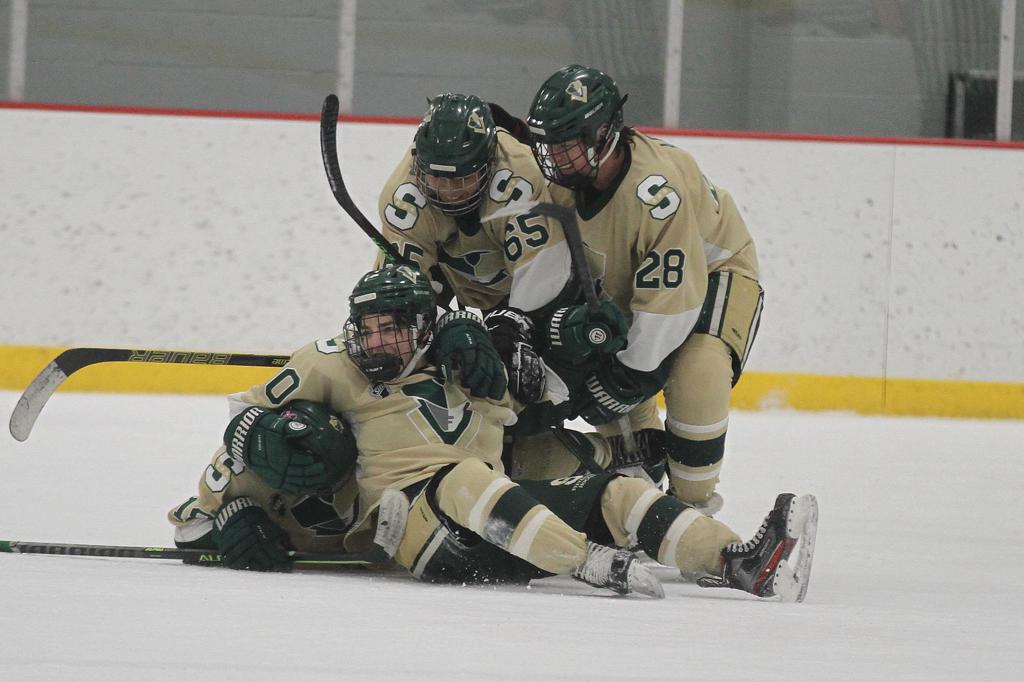 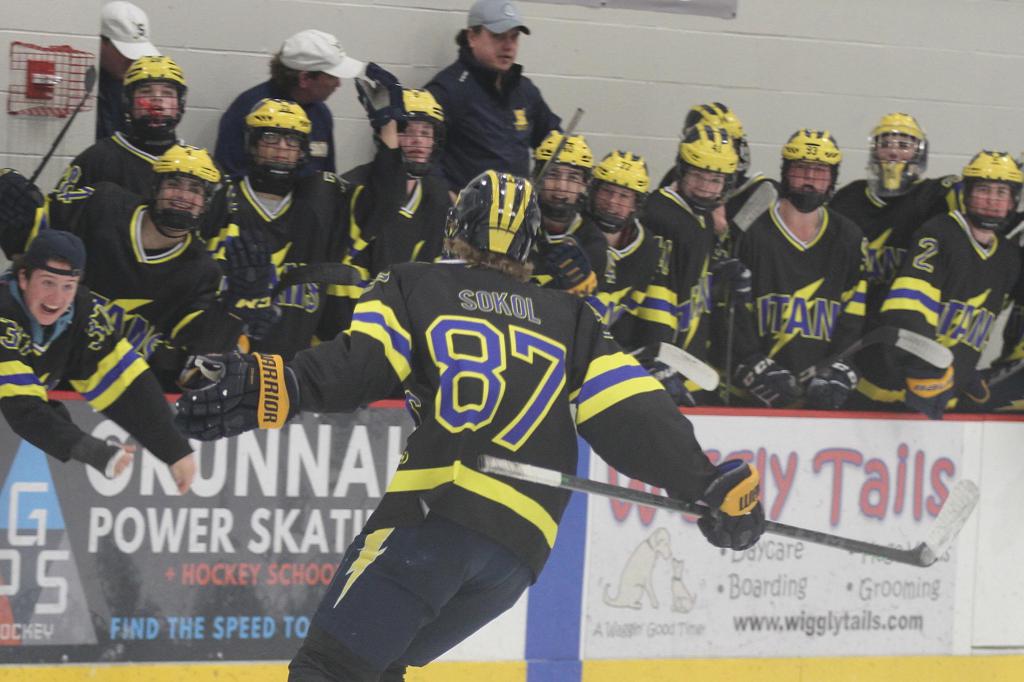