NORTHBROOK -- When he looked up, Glenbrook South’s Carter Erickson saw a sight that always turns adrenaline into rocket fuel.

“I saw me and the goalie,” Erickson said. “I tried keeping my head up best I could out there and one-on-one I was just looking for where the spaces were on the net. It just ripped off my stick and I found a hole.”

Erickson’s short-handed, 2-on-1, third-period goal on a rush up the right side ultimately stood up as the game-winner in South’s eventual 3-1 win at Glenbrook North on Sunday. Jackson Hill struck for South’s first goal in the second period and Jason Ban added an empty-netter with 12 seconds left in the game.

“We came in off a tough loss the other day to Loyola and we come in today and had a nice performance,” South goalie Luke Winger said. “It’s important not to have back-to-back losses so a game like this was good for us.”

With the regular season winding down, South coach Jim Philbin pointed to lessons learned that will likely dictate team performances league-wide, with the SHL playoffs right around the corner.

"You just want to be as prepared as possible, relax, and have fun,” Philbin said. “Stay on that even keel. We need to shut down teams, figure out their weaknesses, and it’s January now so we have a better idea on how to do those things.

“The kids played hard and they played a good game. If you don’t move your feet it doesn’t matter what your plan is, but if you move your feet you’re mentally in it and if your heart’s there, and that makes all the difference.”

If Sunday’s game could be distilled down to one spell, for Glenbrook South it would likely be what the Titans did roughly mid-way through the second period of a fairly evenly-played game to that point.

Right around the 8-minute mark of the second period, the ice suddenly seemed tilted down to South’s offensive zone.

“We stepped it up,” Philbin said. “We call it the wave and we felt that wave coming, and the shifts, and we were starting to shut them down and controlling play.”

Shots were tied 12-12 on the scoreboard up until the final eight minutes of the second period, and when it was over South held a 20-14 edge in shots.

South’s wave paid off when Hill scored from the point on assists from Finn Boland and Zach Freimuth with 6:41 left in the period. Winger happily watched that wave from the opposite end of the ice.

“I saw it and when I saw it happen, I knew we were going to win. We were all over them in that second period,” Winger said. “I’m really proud of us.”

Glenbrook North coach Evan Poulakidas could live with his side’s 1-0 deficit after two periods. It was South’s second goal that hurt, when Erickson scored at 13:45 with North on the power play.

Not long after Winger made a glove save on a North shot from the point, Erickson took an outlet pass on the right side near the blue line, skated up, and scored his shorthanded goal to make it 2-0.

“We’re just not doing the little things right — that’s the eighth short-handed goal we’ve given up this year,” Poulakidas said. “It felt like a pretty even hockey game and we had our (scoring) chances but that goal changed the whole momentum.

“We’re struggling. We had a layoff from Christmas because we got sick and we played one game in thirty days. We were playing really good hockey up until then but we just haven’t recovered yet.”

Winger made a nice save on a North 3-on-1 around the 9-minute mark of the third period, during which North ultimately earned an 11-3 edge in shots, after South posted a 14-6 edge in the second period.

Chasing a two-goal deficit, Glenbrook North found energy and hope when Michael Dimoff cut South’s lead in half, with 5:53 remaining in the game. Dimoff crashed net and buried a rebound to put some added wind in North’s sails. Aidan Siegel and James Dahlke assisted on Dimoff’s goal.

“I thought Dimoff played well. He scored the goal and he was active, you noticed him out there, and he did a good job forechecking,” Poulakidas said.

“We’re really skilled but we’re not as gritty as we need to be. Dimoff’s goal was scored in front of the net, and that’s where we need to be.”

North pulled goalie Nate Kasdan with 1:28 remaining but South held its ground before Ban’s empty-netter ended the day’s scoring, with Freimuth and Owen Almburg on the assists.

“We played the body today and I thought that was the big difference,” Erickson said. “And we picked up sticks in front of our net so I think that made the difference at the end of the day. Winger did a great job in net but I think picking up sticks, especially, was the difference-maker right there.”

Philbin applauded his defense in the win, and loved what he got from Winger, Hill, Erickson, Boland, Mason Dolby, Adrian Sokol, and Jason Ban. Forward Will Papalas also established his considerable presence throughout the game.

“I really saw Will (Papalas) working hard and I loved it,” Winger said. “He’s one of my favorite kids on the team and when he’s working like that, I love it. It’s what you love to see from your captain.” 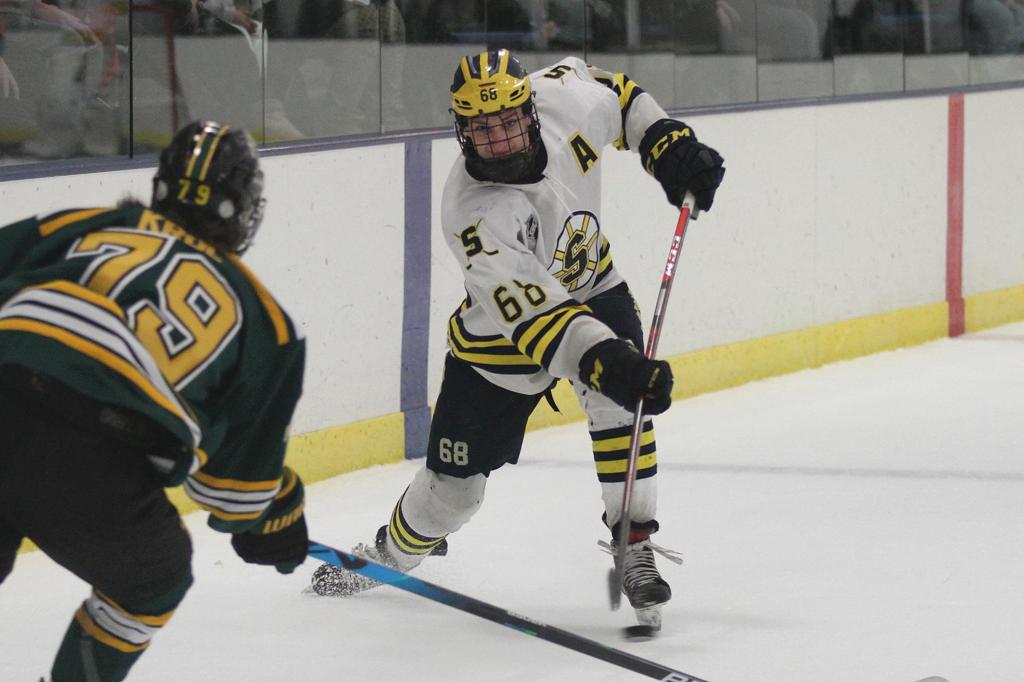 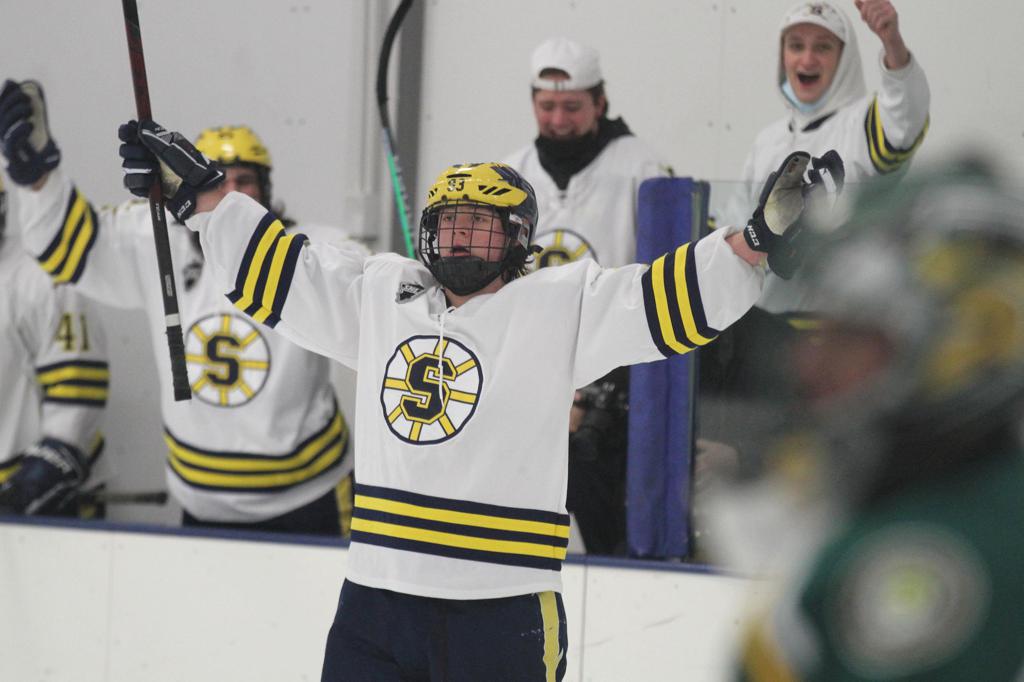 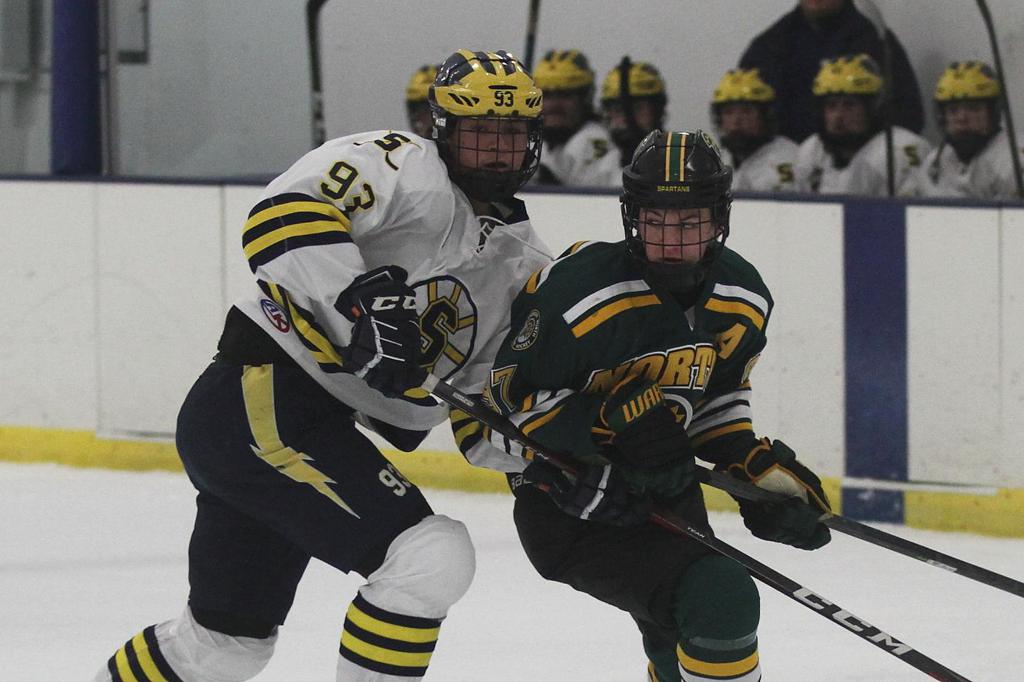 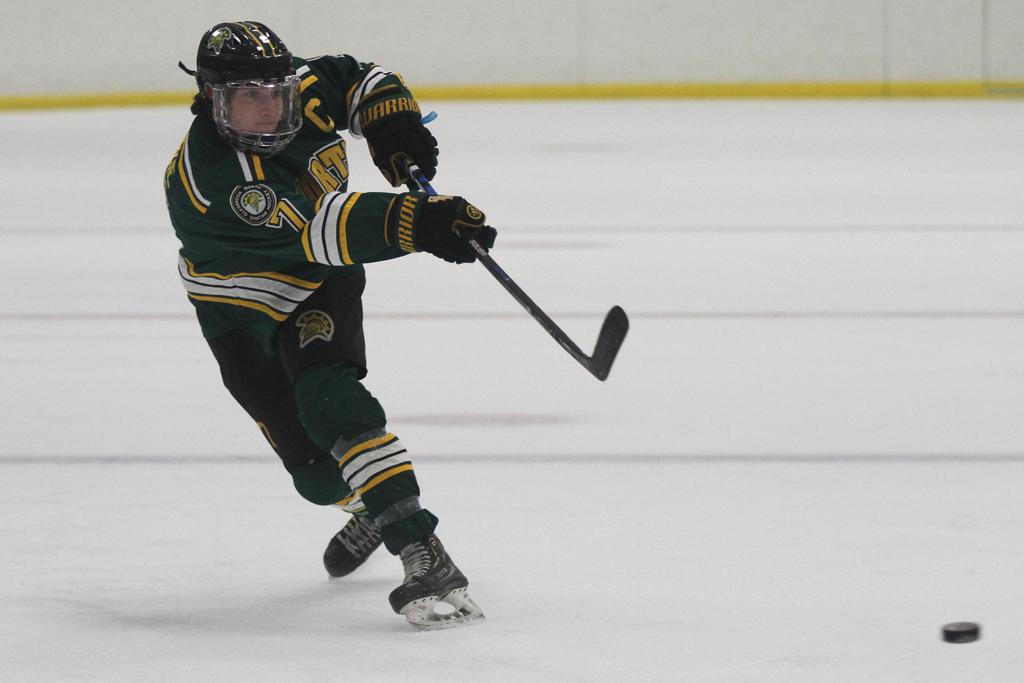 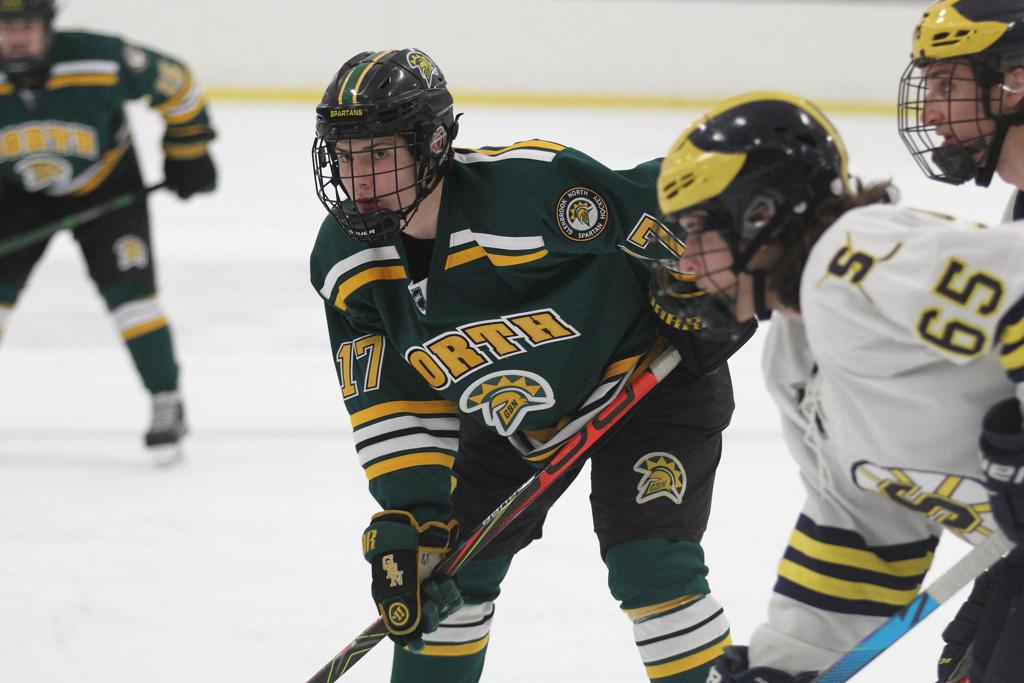 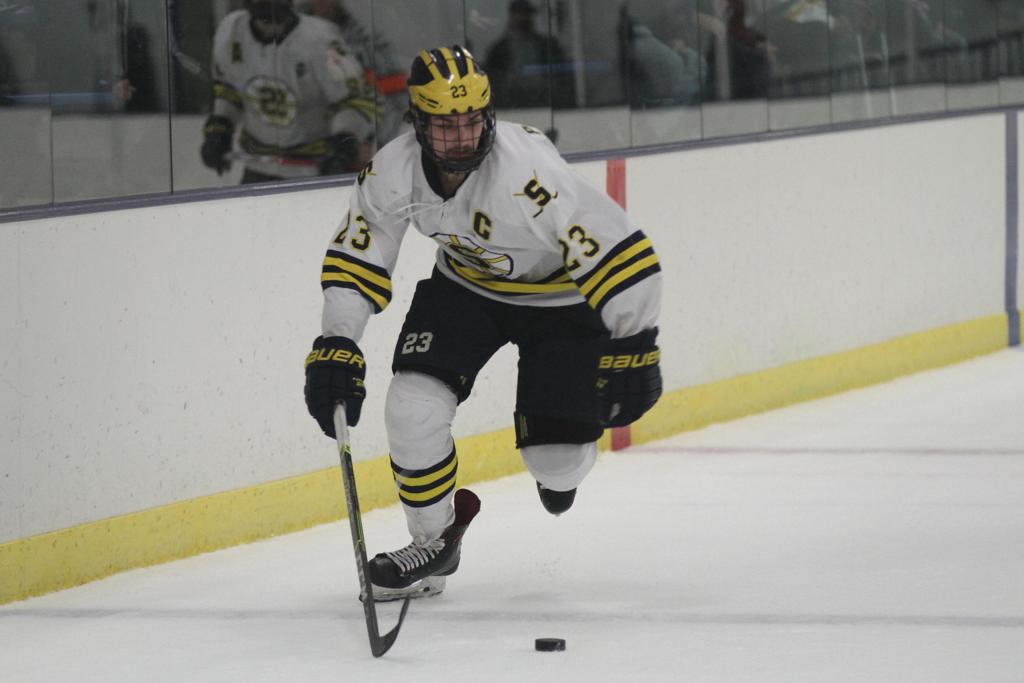 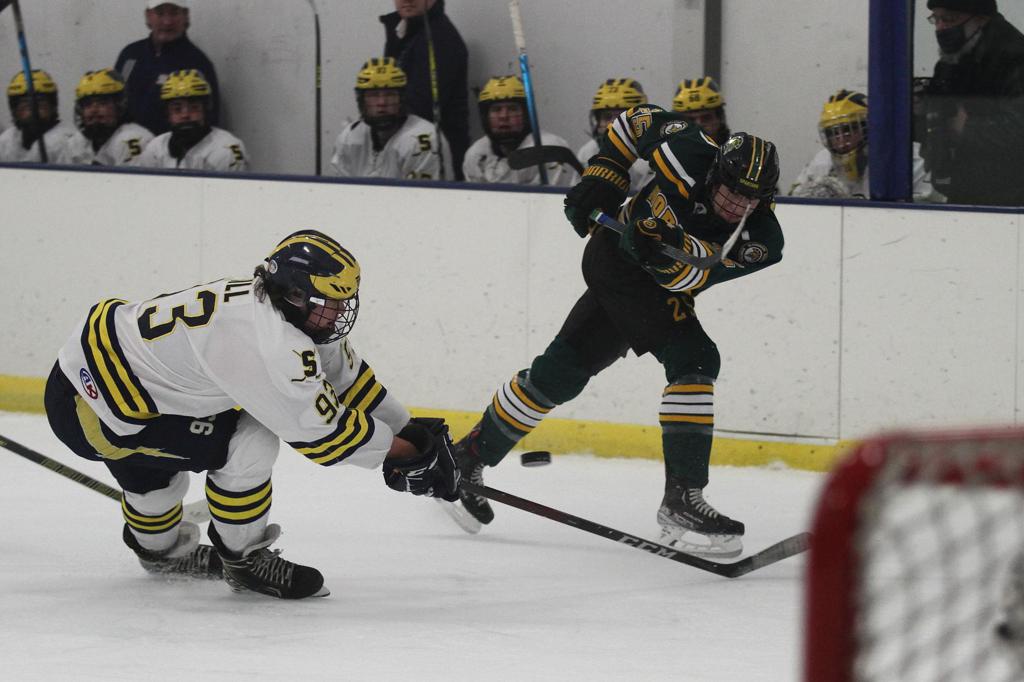 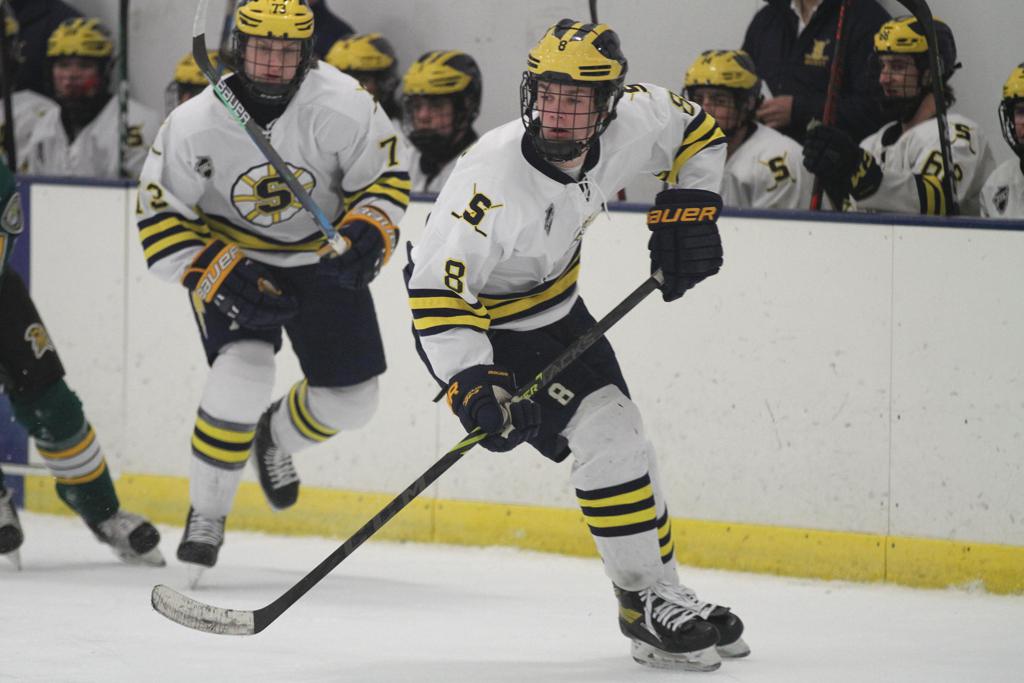 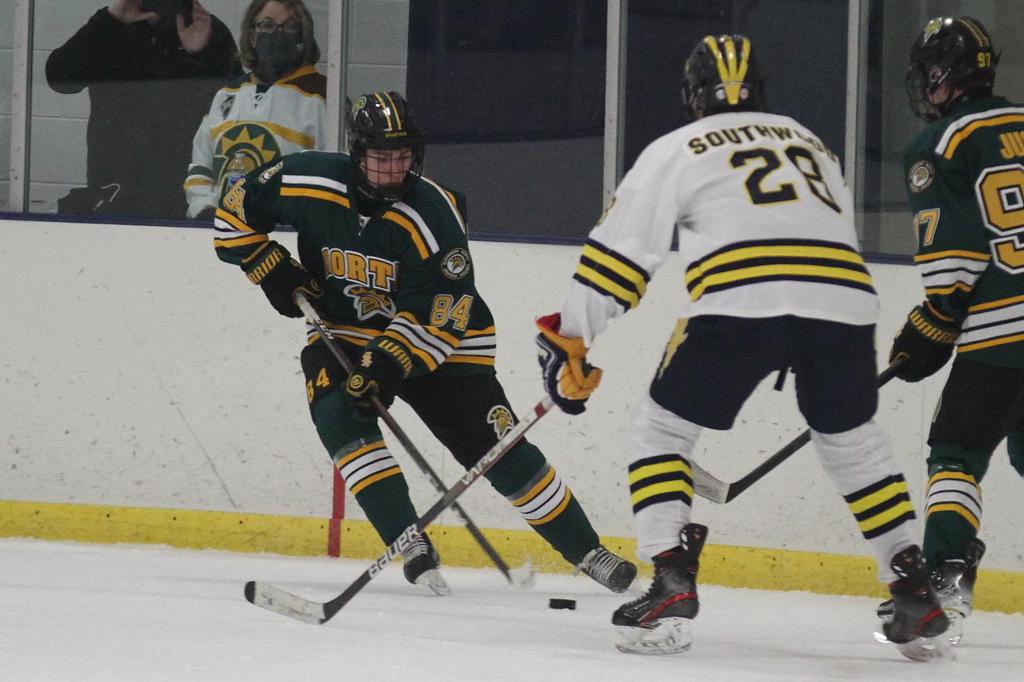