NORTHBROOK — The hockey flow that likely characterizes the hairstyles of 95-plus percent of all hockey players on earth was entirely absent from every noggin on New Trier’s bench, for Sunday’s game against visiting Loyola.

“It’s a tradition, every year,” New Trier’s Butler Chessen said. “We just go to someone’s garage and shave each others’ heads.”

If Chessen is at all superstitious, he may never want to grow his hair out again. The Trevians’ forward scored two goals, including the game-winner in overtime, in a 3-2 win over the Ramblers at the North Shore Ice Arena.

Just 50 seconds into the 5-minute, three-on-three overtime period, New Trier’s Blake Faulkner took the puck on a long trek up the right side with Chessen trailing on the play. Faulkner was met by a defenseman and moved past the net on the right side before sending a short pass back to Chessen, who gathered it and took a stride to the far side right in front before roofing a shot to end the game.

“Faulkner drew two guys in the corner, it kind of squirted out, and I kicked it to myself,” Chessen said. “I just picked it up and scored.”
Such a simple explanation doesn’t do justice to the excitement that came with Chessen’s game-ending heroics, in front a packed house gathered to watch this year’s second chapter of the always-heated hockey rivalry between New Trier and Loyola.

“Overall our game plan was to try to slow down their top line and for the most part I thought we able to do that,” New Trier coach Chad Bidwill said. “There’a always a lot of game-planning and tweaking before we play (Loyola) and overall, we played well.”

Loyola coach DJ LaVarre liked the effort he got from his team and the way the Ramblers kept playing better as the game wore on.

“There’s no victory in defeat but we played hard until the end and at this point in time, that’s good for us,” LaVarre said. “It’s a huge game and you don’t like losing to your arch rival, but in the end it’s a league game and it’s only two points. But I thought it was a good game, indicative of a rivalry game between New Trier and Loyola.”

Loyola struck first when Jack Gustafson chipped a puck from behind the net to the slot and Will Schreiber buried it at the 11:15 mark. It was Schreiber’s 13th SHL goal and Gustafson’s 16th league assist.

The two have developed high-level chemistry playing together this year, along with a third member of their forward line.

“While Gusty and Will are playing these big, loud pieces that everybody hears, Ryan Boersma is the conductor,” LaVarre said. “They all have their strengths and they use them well with each other. They’re talented hockey players and it’s nice this year in the league that everybody gets to see not just our talented players, but every team’s talented players.”

A little more than five minutes after Schreiber’s goal, New Trier tied the game when Tyler Smith scored his 6th SHL goal in a crowded goalmouth, on an assist from Alek Cheris.

New Trier went up 2-1 with 3:10 remaining in the first period on Chessen’s first goal of the game. That goal came after Daniel Balz and Owen Walker combined to get a puck to the front of the net, where Chessen finished on it.

Chessen scored a hat-trick in a 6-4 win against Carmel on Friday and Bidwill applauded Chessen’s stretch of exceptional play.

But if a hockey team is a family, a player’s line mates are his favorite brothers, and Chessen quickly shifted the credit when asked about his recent goal-scoring spike.

“I love my two line mates, Owen Walker and Danny Balz, and they’ve made it pretty easy for me,” Chessen said. “There are also just a lot of ups and downs in hockey and I’m just riding it out.”

After Chessen’s goal and for more than 35 minutes of hockey, the game went scoreless. New Trier posted a 12-7 edge in shots in the first period and a 10-8 edge in the second, and the Trevians knew the Ramblers would be pressing hard for a tying goal in the third.

Press they did, as the Ramblers had an 8-3 edge in shots in the final period as Schreiber, Gustafson and company fought tooth-and-nail for a game-tying goal. That goal came with only 1:41 remaining in regulation.

The aforementioned Loyola duo linked up again for that game-tying goal, and it started with a tremendous individual effort by Gustafson. From the boards deep on the right side, Gustafson deked his way around two Trevians on his way towards net before feeding Schreiber near the back post.

Schreiber’s 14th SHL goal of the year effectively sent the game into overtime, with Loyola poised to potentially ride some momentum as three-on-three play began.

It wasn’t to be. Faulkner’s long romp and Chessen’s goal ended the night just 50 seconds into overtime.

“I loved the patience by (Chessen),” Bidwill said. “He has played great since the break. He had a hat-trick against Carmel and he’s coming to life at the right time. He hustles and when his game is on, he has a lot of speed and forces (defensemen) to come up on him and he’s able to blow right by them. When he has patience with the puck like that, he’s capable of great things.”

GAME NOTES:
Loyola
The top-ranked Ramblers went into Sunday’s game on the heels of an overtime win at 2nd-ranked Stevenson followed by a 6-1 loss at home Saturday to 6th-ranked York.
LaVarre was much happier with his side’s play against New Trier and heading into their next game against Oak Park and River Forest, he hopes boys will take a lesson from consecutive losses in consecutive games.
“I’m disappointed that we lost but I’m happy they showed up (vs. New Trier) with a little bit of a chip on their shoulders after Saturday’s game,” LaVarre said. “It showed character. But it’s also understanding that if you’re not ready to go, like we weren’t against York, we can also lose to (OPRF).
“You learn from it — how did play, what did we learn, and what can we take away from it that will make us better tomorrow? Sometimes the hardest lessons learned are the toughest and we’ve learned that we’re not invincible and we need to be prepared to play.  So I’ll view this weekend as a good learning experience.”
Loyola junior goalie Bradin Haynie got the starting nod against New Trier and LaVarre appreciated what he got from Haynie.
“I thought he played well,” LaVarre said. “He stepped up into a game and an environment and I thought he played really well. He kept us in the game and made some timely saves for us at the beginning of the game.”
New Trier
The Trevians were similarly elated with the play of starting goalie Drew Durdov in Saturday’s rematch with Loyola.
“We put Drew in net, as a sophomore in his first real big game and I don’t think either of their goals were his fault,” Bidwill said. “He played outstanding and made some really big saves.”
With hundreds of loud, passionate fans packed into both student sections, it would have been understandable if Durdov had an excess of nervous energy on Sunday. But he kept a cool head.
“I was fine as soon as the puck dropped — I always know that crazy things can happen in a game,” Durdov said. “It was just good to have so much support here, in a big game between two of the best teams.”
Another key element for New Trier on Sunday was the positive and high energy emanating all game long from the Trevians’ bench, especially after they trailed 1-0 early in the game.
Bidwill hopes the 3rd-ranked Trevians keep that going in their Tuesday game at Stevenson.
“Sometimes when we get down, our bench gets down, and the energy on the bench transitions to the ice,” Bidwill said. “When we’re hot on the bench we’re going to carry it into the shift and off the shift. It’s easy to get up for Loyola but we have to keep taking pride in that and keep that energy up.” 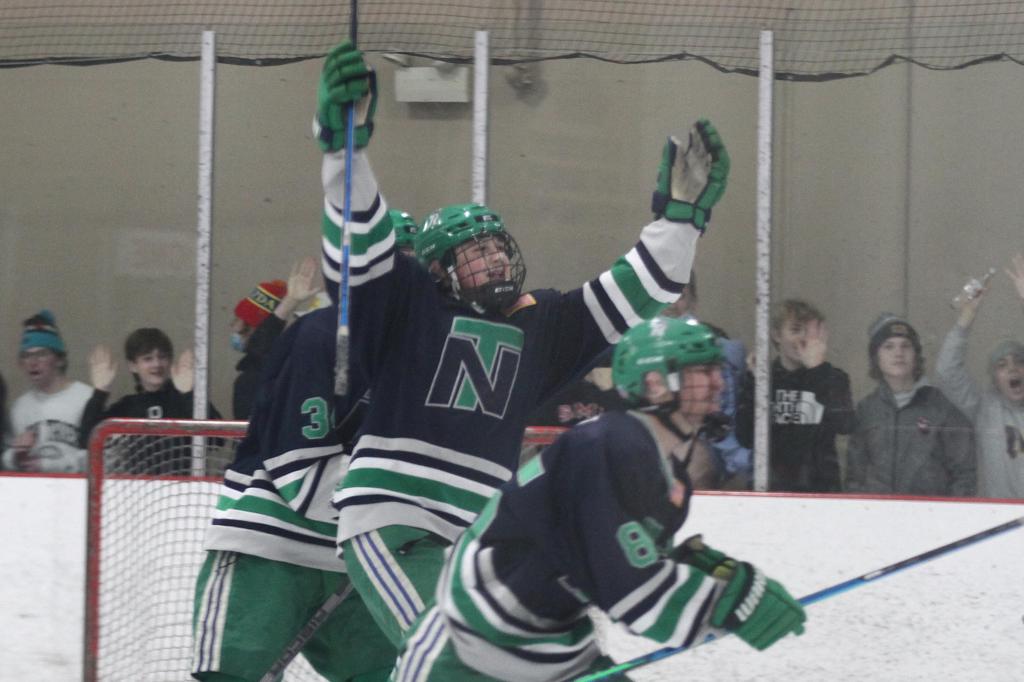 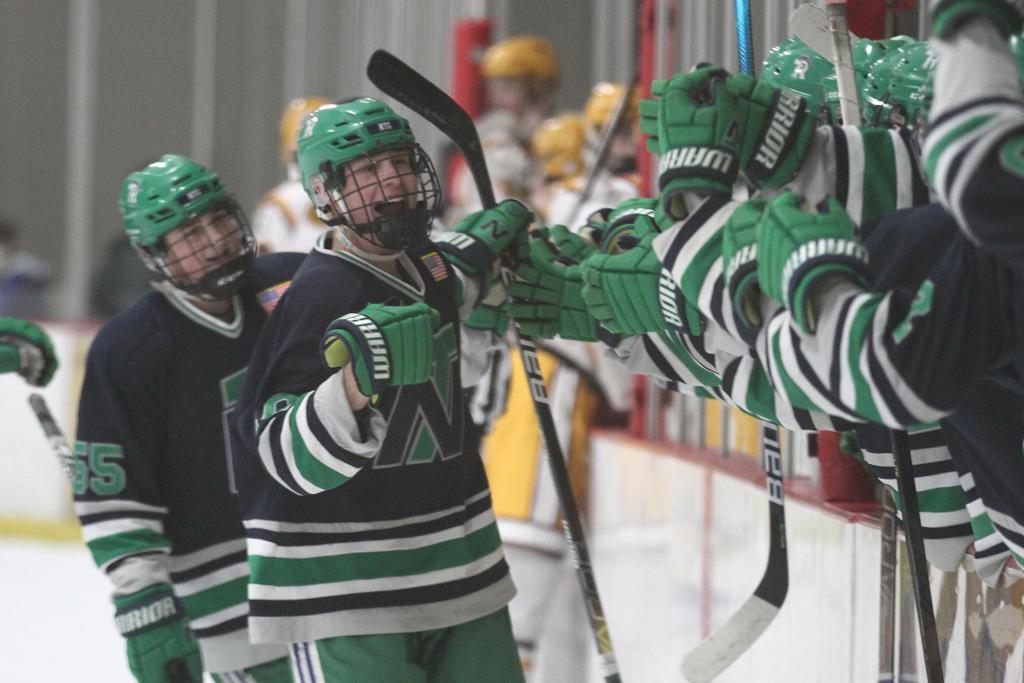 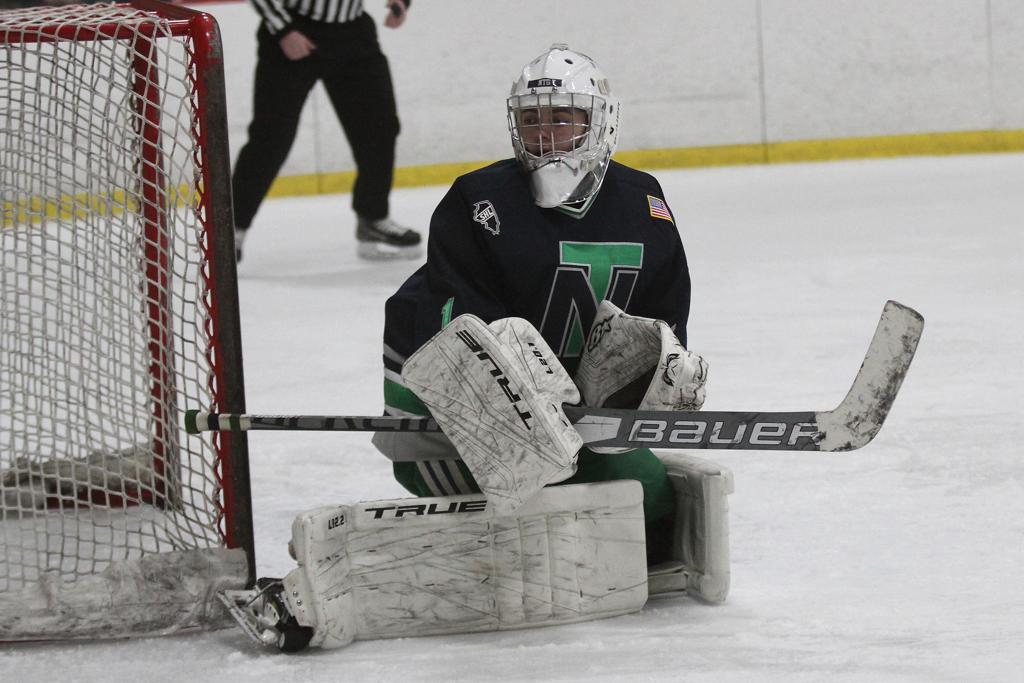 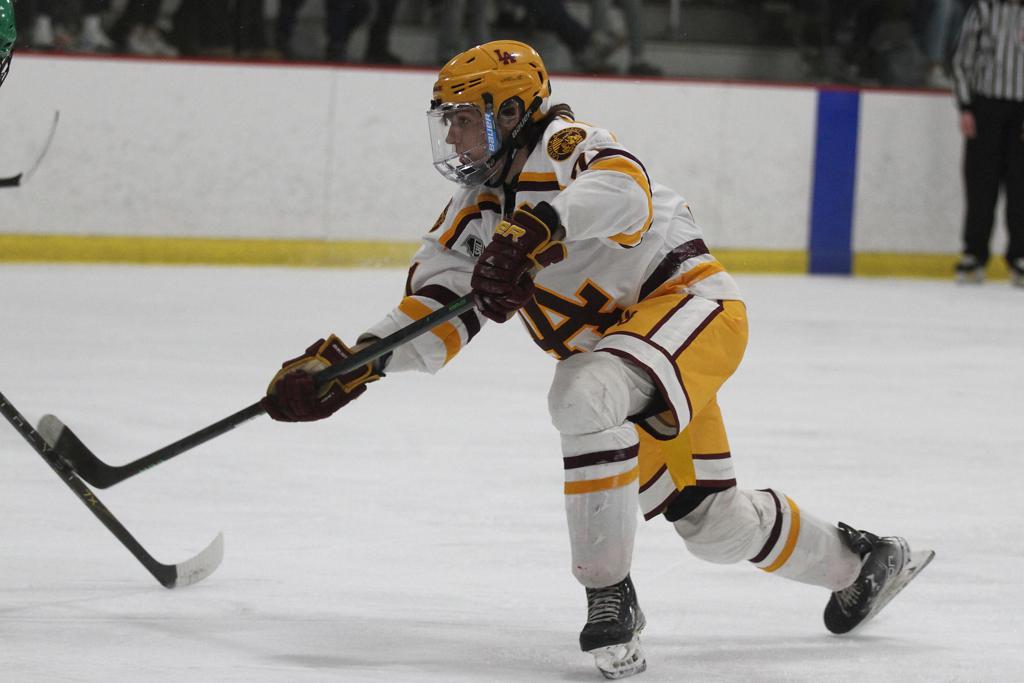 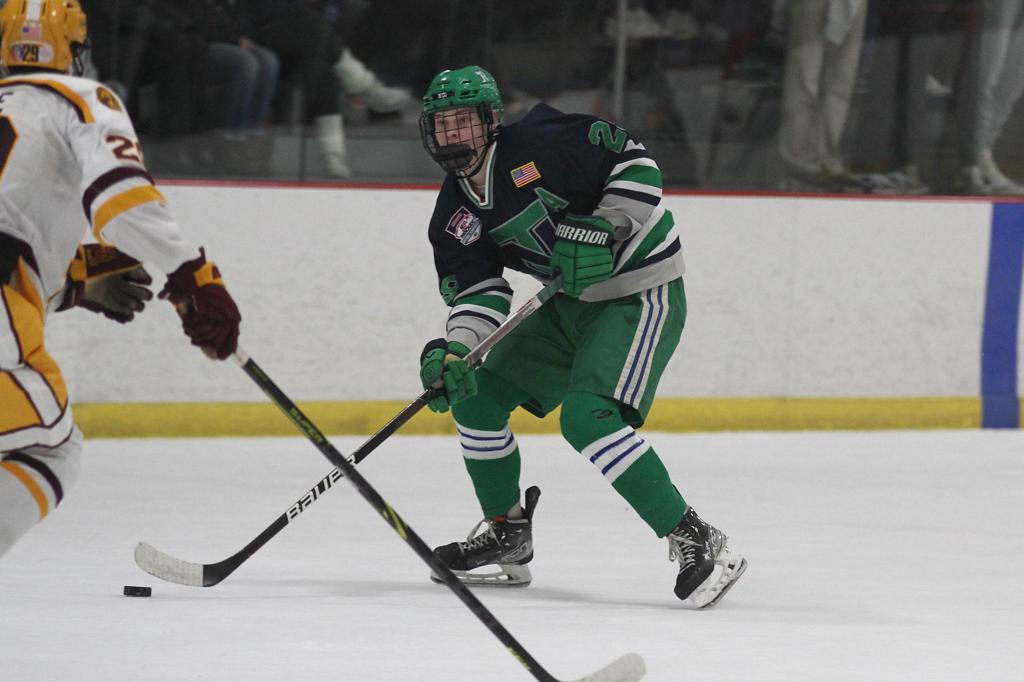 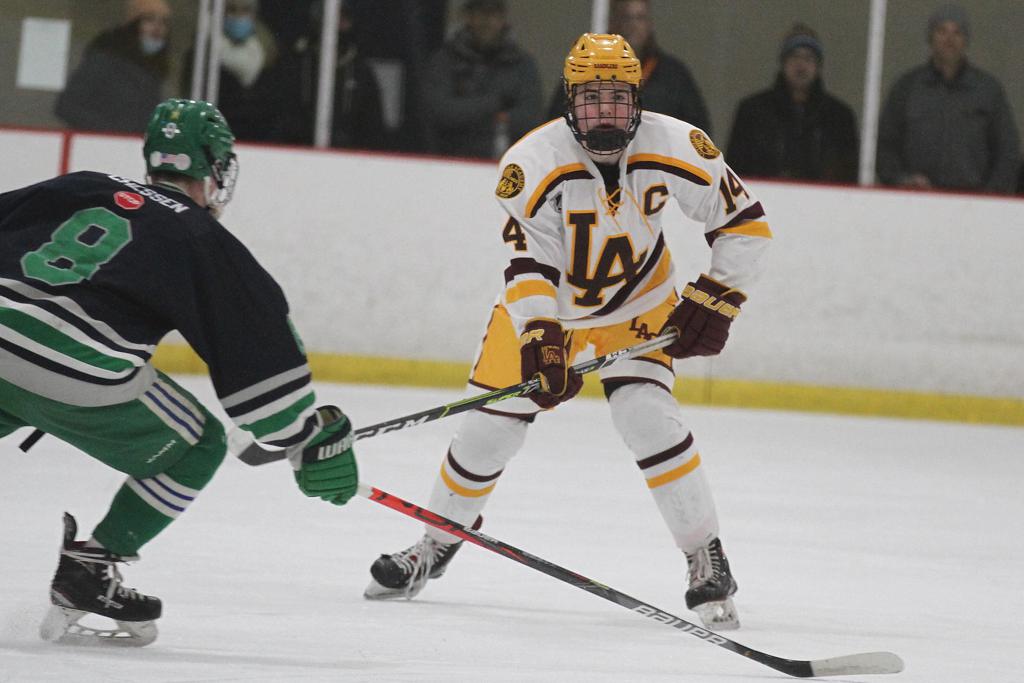 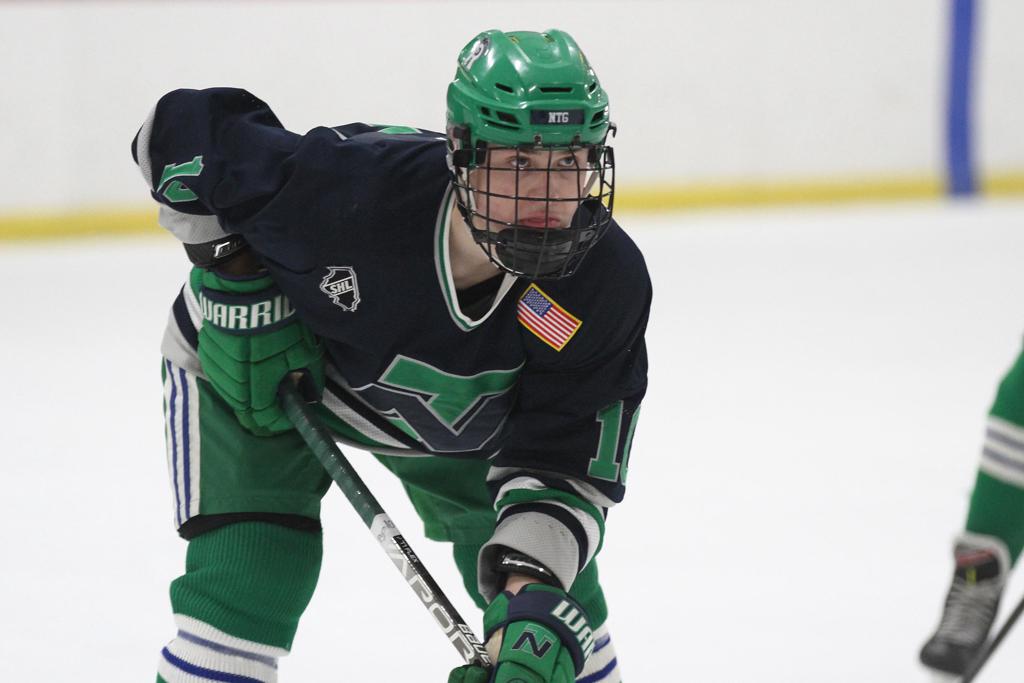 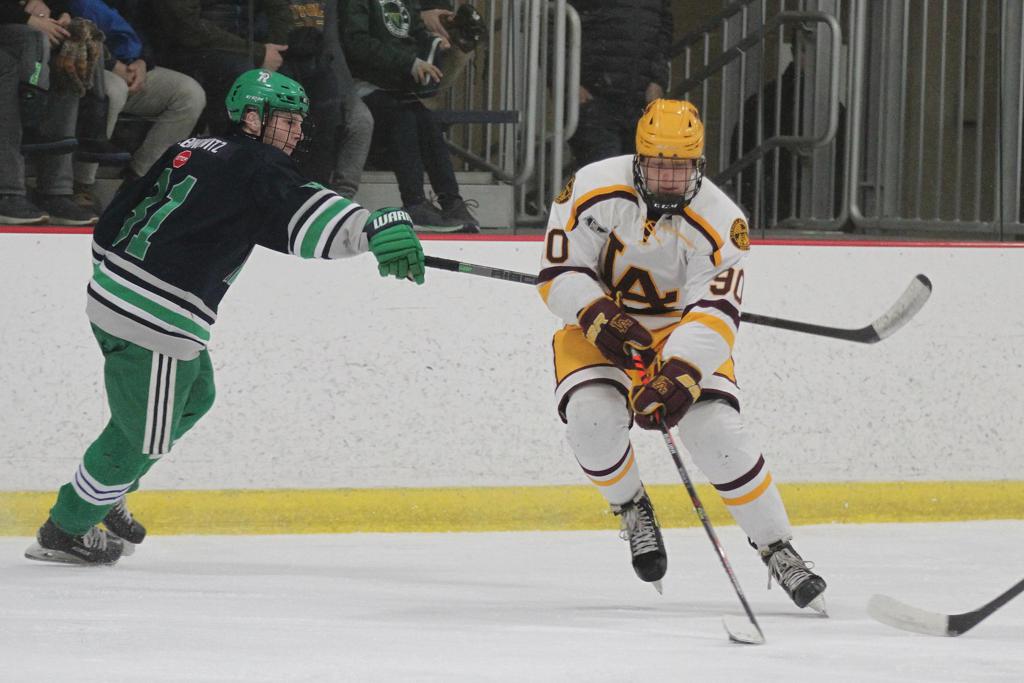 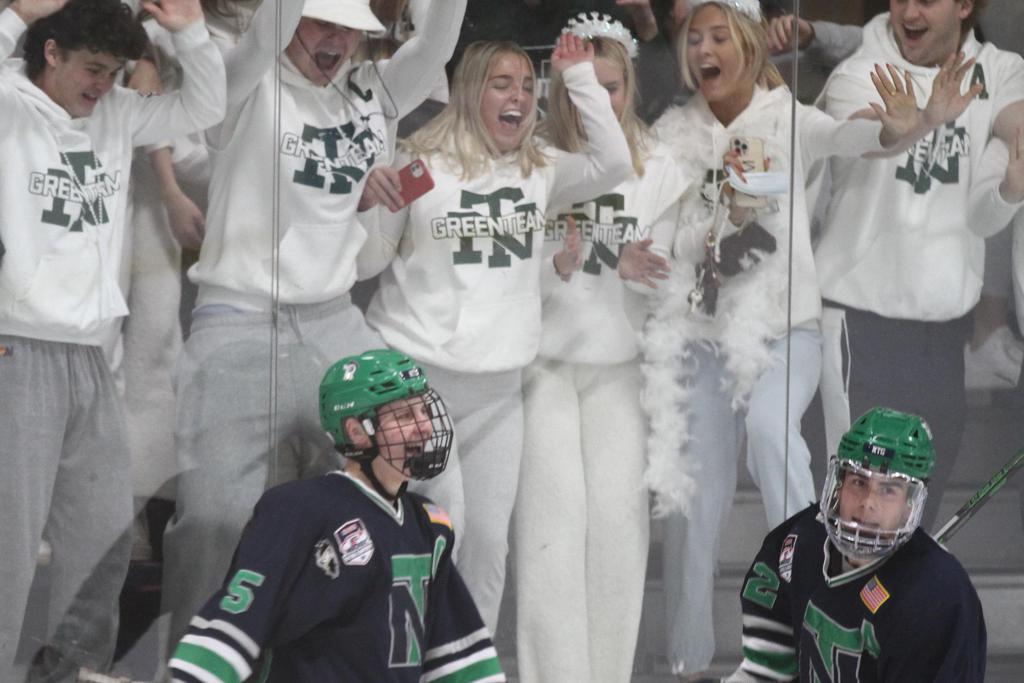