GLENVIEW -- The problem that Stevenson poses for opponents isn’t even necessarily the skill level of its players, although those players are skilled, to be sure.

“I wouldn’t say they’re as skilled as Loyola, or New Trier, but they work so hard and they play as a team,” Glenbrook South forward Jason Ban said. “Even if you’re on the opposing team, it’s cool to watch the way they play as a team, and always know where each other are. It’s a team game and they execute it perfectly.”

The Patriots sit atop the SHL standings through Wednesday’s games for a reason, and their cohesive five-on-five play earned them a 42-20 edge in shots over host Glenbrook South, and ultimately a 4-2 win.

Stevenson (14-5-0 in SHL play) got two goals from Davis Jegers and one apiece from Spencer Harman and Brandon Schultz, while Glenbrook South (6-10-0) got a goal apiece from Brad Southwood and Matt Callaghan.

With less than two minutes remaining in the game, a 2-2 tie seemed destined for overtime. But with 1:13 remaining, Jegers pounced on a puck at the goalmouth and buried the game-winner. Jegers followed with an empty-netter with only 41 seconds remaining.

Stevenson coach Tom Wood summed up the game this way:

“I thought five-on-five we really dominated, but they play good ‘D’,” Wood said. “A lot of the shots we took in the beginning were from the outside and the three goals we scored were right in front of the net. (Glenbrook South) did a nice job early of keeping shots to the outside. I kept telling our guys to get in front, get inside their defense, and we finally did that late in the game.”

South coach Jim Philbin bemoaned that his Titans let a point in SHL the standings slip away down the stretch of regulation, a fact made particularly painful since South’s Matt Callaghan’s goal had tied the game at 2-2 with only 3:34 left to play.

But Jegers, who leads the SHL with 19 goals and 31 points through Wednesday’s games, effectively scored the game-winner with time running out.

“We work hard, we tie it up, and then a bit of a blown coverage on our forecheck, which allowed them to gain access into the neutral zone,” Philbin said. “That’s a mistake we had. Then it’s a broken play and it pops right to (Jegers), who’s wide open because we didn’t have coverage, and he buried it.”

The game’s first period saw Stevenson on the power play three times and post a 15-4 edge in shots. Glenbrook South had a breakaway opportunity and a two-on-one scoring chance in the period, but the first 17 minutes went scoreless.

The two goals scored in the second period came two minutes apart. Glenbrook South got its first power play and at the 5:56 mark Brad Southwood scored off a Mason Dolby feed to give his side a 1-0 lead.

Exactly two minutes later, at 3:56, Stevenson knotted the game on a Brandon Schultz goal, with assists from Cam Schneider and Ethan O’Gradney. Both Stevenson goalie Jonathan Adler and Glenbrook South goalie Eli Kamins made some quality saves through two periods.

A shot by Stevenson’s Zach Meyers hit the bar and Adler stopped a breakaway shot from Will Papalas in the first period. Adler made a glove save on a Finn Boland shot and Kamins turned away a Jegers breakaway shot in the second period.

The teams retired to their locker rooms at intermission tied 1-1.

“Our passing is getting better,” Jones said, "and kids are getting more confident with the puck — skating with it instead of just flinging it away.”

Glenbrook South’s penalty kill was rock-solid through two periods, and Southwood got his goal on the power play.

“We pride ourselves on special teams,” Ban said. “We had a rough start to the year with them, but our power play has found its identity and our penalty kill has been working well.”

Harman struck from point-blank range at 15:24 of the third period on a Rafael Biedron feed to the goalmouth, giving Stevenson a 2-1 lead. That’s the way it stayed until Callaghan’s goal at 3:34 on assists from Owen Almburg and Southwood.

“It was a good game and Stevenson is a great team,” Ban said. “They were putting shots on net and one of them was bound to go in. They got a good bounce, we didn’t have numbers back, and Jegers is just a phenomenal player. He’s not going to miss that shot from five feet in.”

Wood was happy to bring his team into Glenbrook South’s barn and see it get a ‘W’.

“They’re a tough team and they’ve played everybody tough all year,” Wood said of the Titans. “It’s obviously exciting when you can win a game with a minute left.

“I thought (Zach) Meyers had a good game again today, (Will) Harlow had a good game on defense — really, I thought our ‘D’ played pretty well. (Brandon) Schultz had a nice game and so did (Zack) Kulick — he didn’t play much but every time he’s out there, he’s creating havoc and the puck is in their zone. He gives us energy.”

With senior goalie Luke Winger absent for South from Wednesday’s game, Kamins got nothing but accolades from his side afterwards, for the day’s work he put in between the pipes.

“Eli had a great game,” Philbin said. “He did really well. He’s a sophomore, he battles hard, and he’s new to the program in the spring. He does such a good job with his work ethic and he has grown so much this year. The team loves him, the coaching staff loves him, and he has a battle in his heart. He works hard to get better and he’s a battler, every play.

“I’m happy for Callaghan, too. He’s a kid that’s been injured most of the year and just got back a couple weeks ago. He has played a good role on the third line and I moved him up for the last couple shifts he had on the ice, and he buried one. So I’m really happy for him.”

GAME NOTES:
Stevenson
Not to be overlooked in a game where Jegers took over the SHL lead in scoring was teammate Cam Schneider. Schneider’s two assists gave him 17 in SHL play for the year, which also leads the league.
“Cam Schneider had a good game,” Wood said. “He’s a playmaker, a great passer, and he sees the ice very well. Sometimes I’m like ‘dude, shoot’, but he’s a pass-first kind of player.”
Wood also liked what he got from Jones, who was key in slowing down South forward Papalas.
“I thought Nolan had a really good game today. I had him playing against Papalas a lot,” Wood said. “He did a good job shutting him down. What’s great about him is he’s just so good defensively. He’s big, he can play against big guys and little guys, and he’s talented offensively, too. The thing I like about him so much is that he’s so versatile. He’s big but he can skate well, and it’s nice to have a guy like him.”
Jones liked the energy and positivity his Patriots brought to Glenview, and he applauded some key contributors in the win.
“Davis (Jegers) played well, I thought (Cam) Schneider played well defensively and Adler had a good game,” Jones said. “And I thought (Dylan) Jette had a good game. When he got the puck, he was making things happen.”

Glenbrook South
Ban applauded the game in net that Kamins put forth, along with the play of Callaghan, who had a prominent presence in Wednesday’s game in addition to scoring a game-tying goal late in the game. Ban also tipped his hat to South forward Erik Steenstrup for what he’s bringing to the table this season.
“(Steenstrup) is always out there battling,” Ban said. “He’s a scrappy kid, always out there working his butt off to give you a hundred and ten percent.
“Eli is a phenomenal goalie. He’s young and I’m excited to see what he’s going to do over the next two years for this program. Coming in as a sophomore and facing varsity-level kids who have been playing Triple-A, high double-A, Central States — it’s very different from the travel game, and he has adjusted well and he’s been playing well against some tough teams.”
South’s penalty kill crew featuring Ban, Southwood, Carter Erickson and Zach Freimuth was rock-solid, and a South power play featuring Ban, Owen Almburg, John Mulvey, and Mason Dolby stood out against Stevenson.
“Our special teams, as the year has gotten going and we’ve moved to a different system — the boys have really done a great job with that,” Philbin said. “Our penalty kill was lights out and our power play was moving the puck and woke us up a little bit. It was nice to see.” 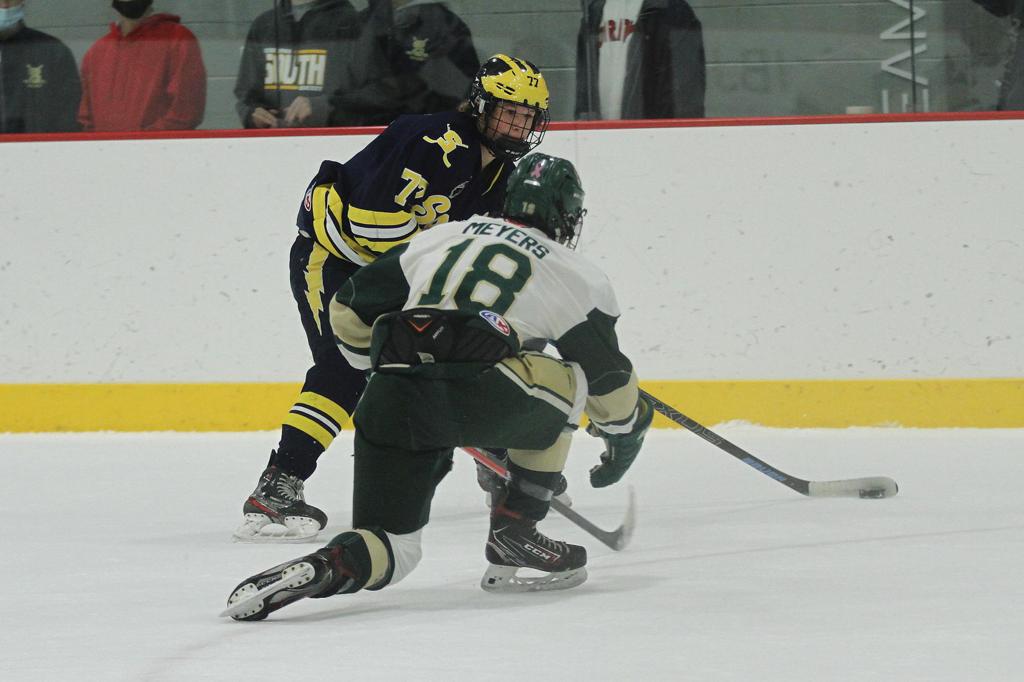 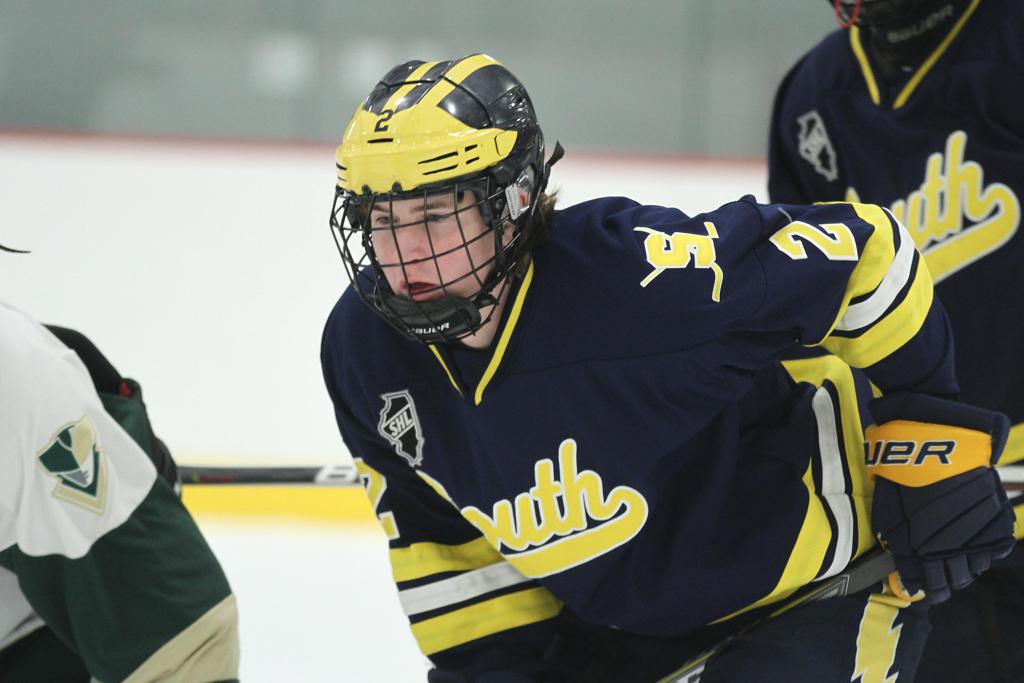 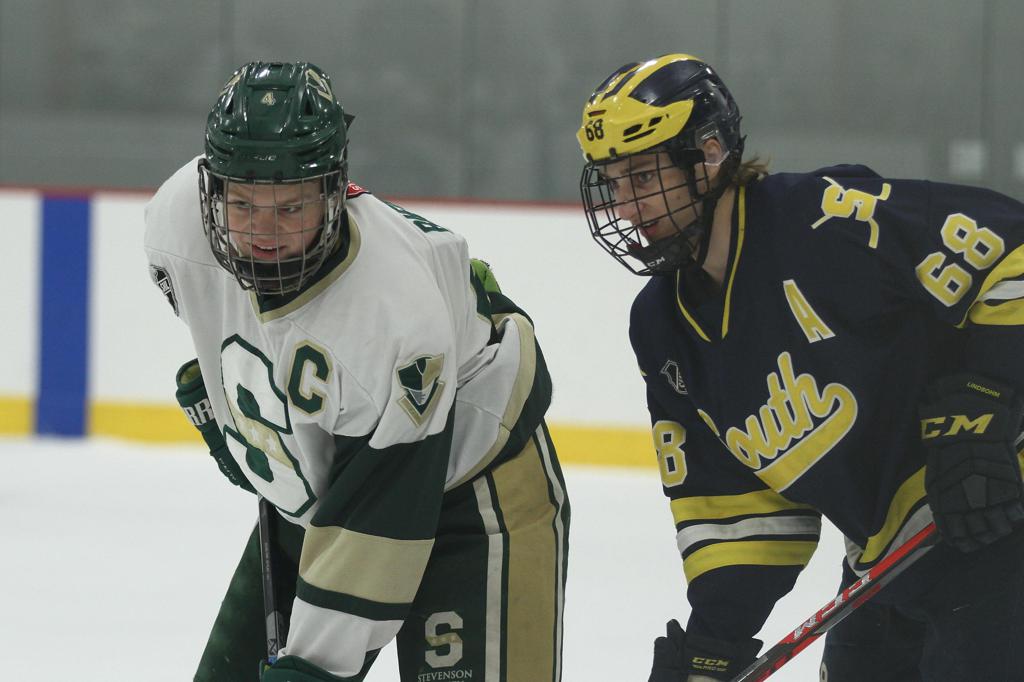 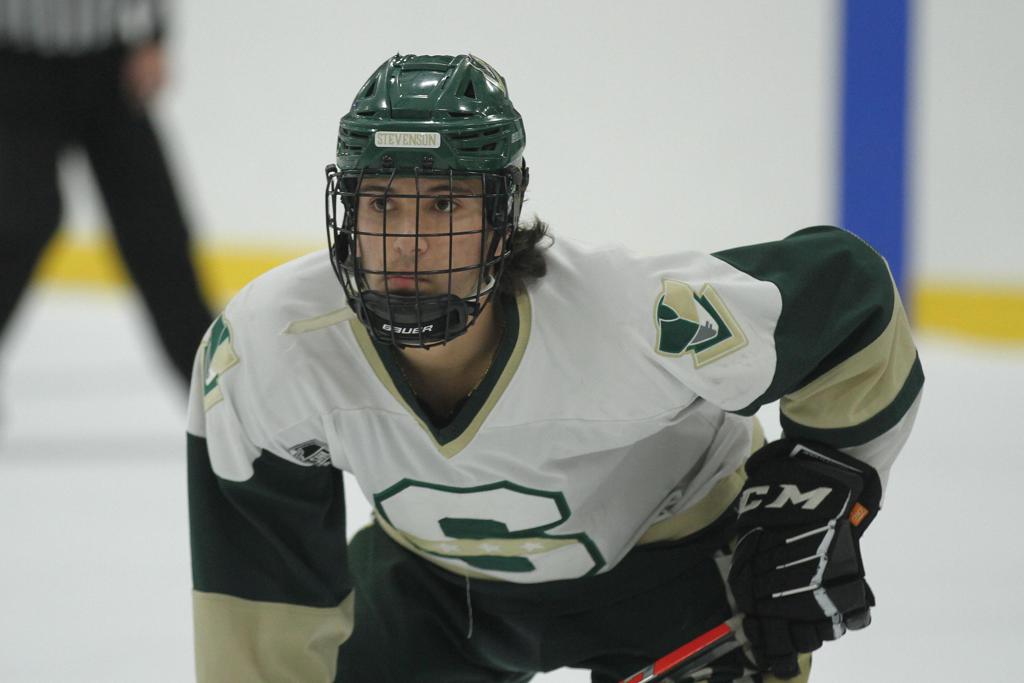 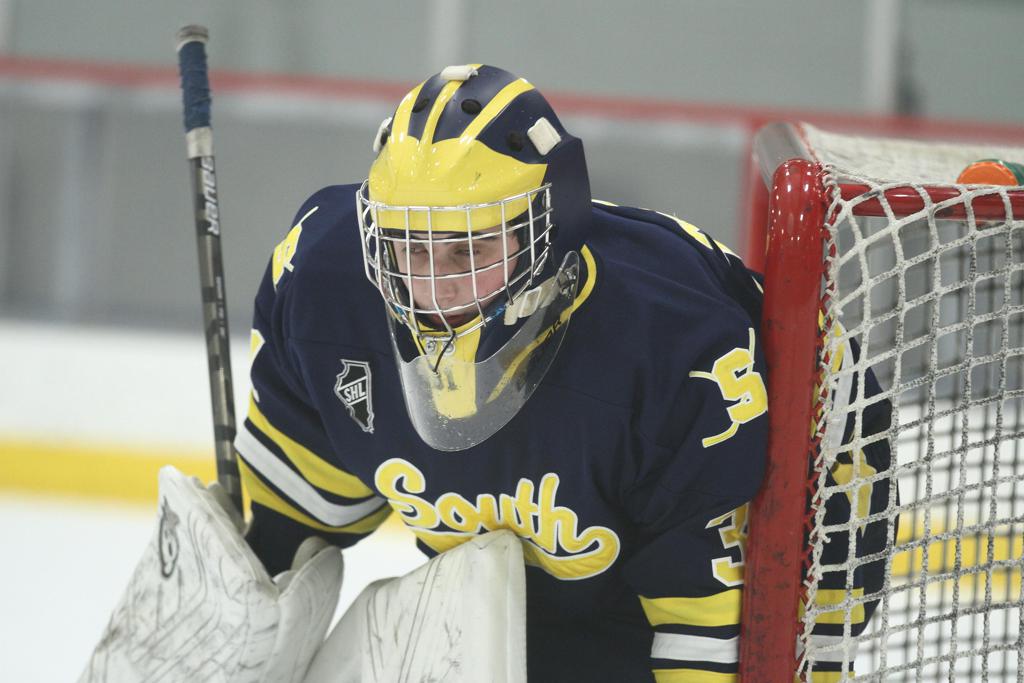 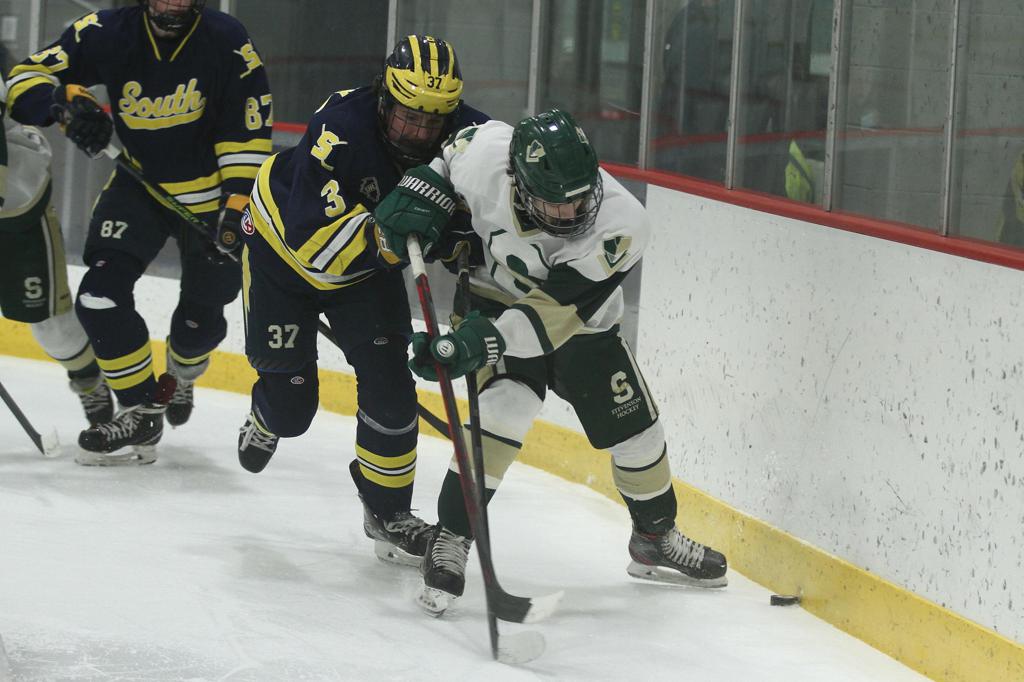 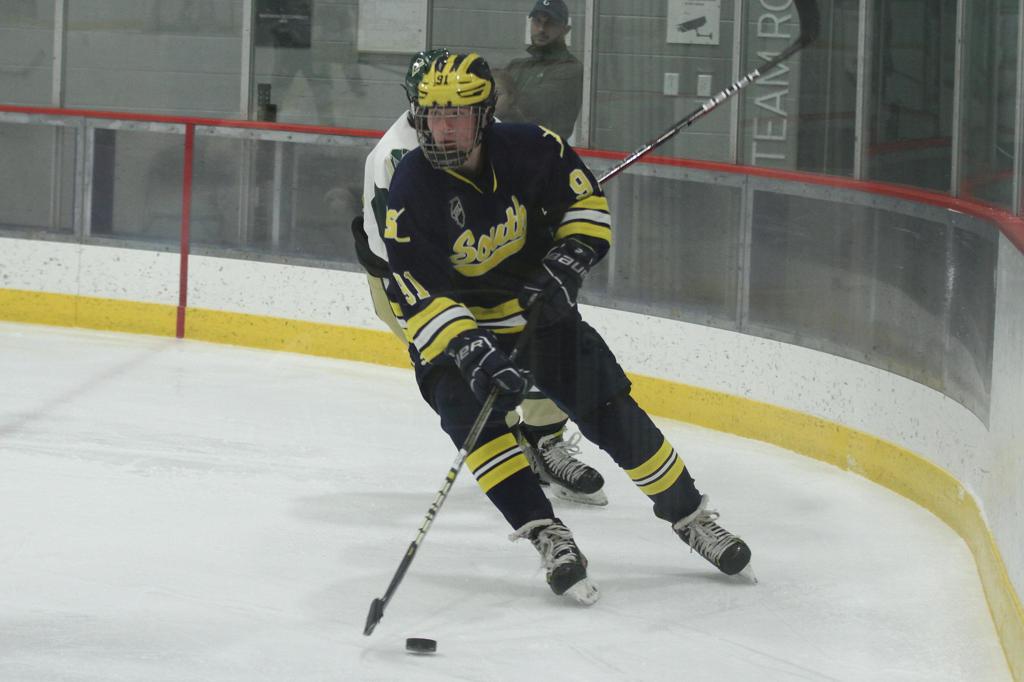 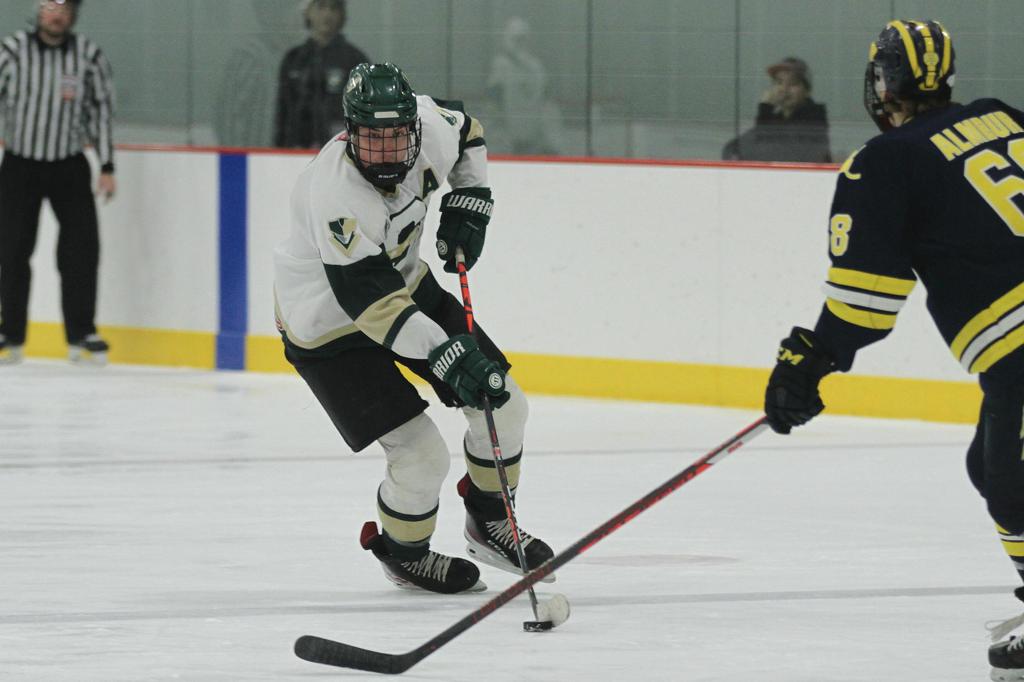 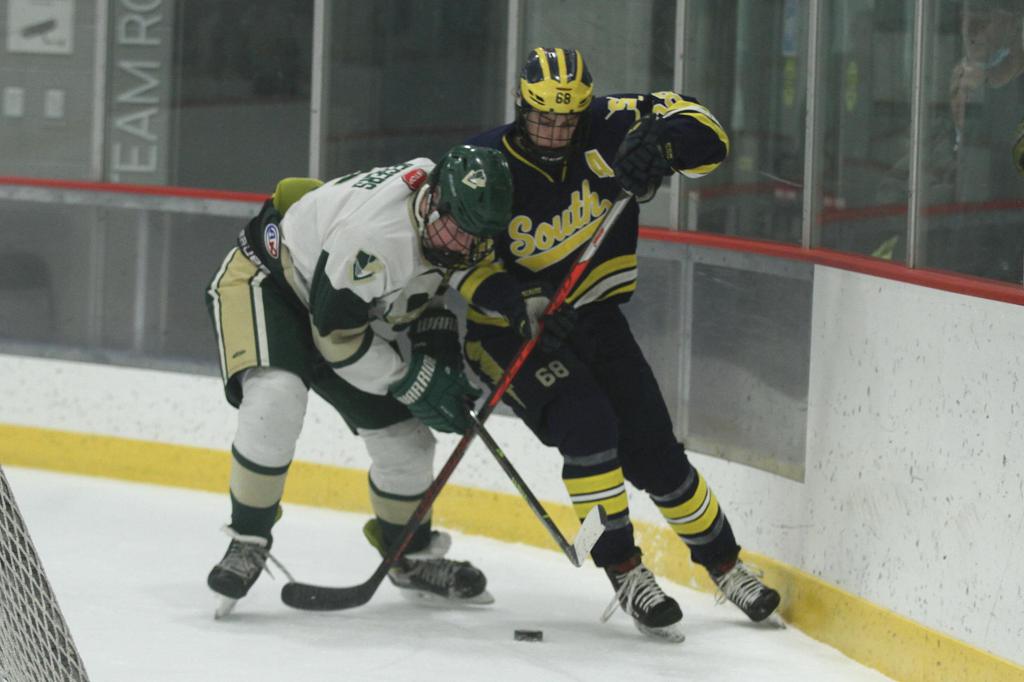