ADDISON -- It might raise an eyebrow of curiosity that the box score from their game on Friday shows that visiting Stevenson only out-shot York 32-30, but won the SHL showdown with a more one-sided score of 5-1.

“Five-on-five, I thought it was a pretty even game,” Stevenson coach Tom Wood said. “We just won special teams.”

Despite the absence of six players for assorted reasons (down from nine recent absences), Stevenson used the depth of its forward line and a stalwart defense to improve to 12-3-0 in SHL play.

The win also snapped a two-game skid for Stevenson, after losses to Glenbrook North and Saint Viator.

“I think we played great. We needed a comeback after the two losses we had,” Stevenson captain Will Harlow said. “We were hungry tonight and that’s exactly what we brought to the table.”

Stevenson’s Brandon Schultz kicked off the scoring at the 9:06 mark of the first period with a power play goal, on an assist from Cam Schneider. York’s Shane Gorski followed with a shorthanded goal, sparked by Greg Lee.

“Greg Lee won a face-off and made that pass over to Gorski, and that was huge,” York coach Matt Boeing said. “And Shane finding the back of the net — he has a lot of assists this year but he can be a real threat out there on the ice when the puck’s on his stick.”

Gorski’s goal was a first-period sandwich between goals from Schultz and Stevenson’s Ethan O’Gradney, who buried his goal at the 2:24 mark on assists from Davis Jegers and Zach Meyers.

A busy first period both ways saw Stevenson post a 14-11 edge in shots en route to a 2-1 lead.

The rest of the game’s scoring came off Jegers’ stick. He struck twice in the second period, first at 11:03 on assists from Schneider and Meyers, then again on a power play with 24 seconds left in the period.

Harlow and Schneider assisted on Jegers’ third goal on the power play, with little more than a minute left in the game. Schneider’s third assist of the day helped Jegers to a hat-trick, which he also managed in a game against New Trier on Oct. 21.

Asked how many goals he has this season after scoring a hat-trick on Friday, Jegers just shook his head.

If Jegers is reading this, he’s about to learn that he has scored 15 goals in 16 SHL games through Friday’s win as the team’s leading scorer.

“We’ve just got to be more responsible with our sticks and we’ve got to put pucks away,” Boeing said. “We only had one goal five-on-five so we need to be better and have a better presence inside the house.”

York went into Friday’s game having won five of its last seven games, including wins over SHL opponents New Trier, Carmel, and Glenbrook South. Losses came in overtime to New Trier and in a 1-0 loss to another one of Illinois’ top teams in St. Ignatius.

Like Stevenson, the Dukes also have a depth of quality across their lines. That depth showed Friday despite York’s low goal output, and has helped the Dukes already put up more SHL points this year than in any previous season in the league.

“Our talent is spread out on our lines, we have four lines that can all produce, and we just have to row the boat together,” Boeing said. “I have a ton of respect for Tom Wood and the other SHL coaches, and we’re all kind of in the same boat, where it’s anybody’s game on any given night and whoever shows up and grinds it out the hardest, and stays out of the box, is usually going to prevail.”

Boeing also pointed to a player that stood out for him despite Friday’s loss.

“Brendan Quinn, a senior defenseman, really set the tone winning the puck battle and getting pucks in deep,” Boeing said. “You could tell he was on another level yesterday.”

York’s inability to find goals in the final two periods can also likely be traced to the job Stevenson goalie Jonathan Adler and his back-line crew put forth.

Adler has shined this year.

“He’s been playing amazing,” Harlow said. “He’s having such a good season. It gives us a lot of confidence knowing he’s behind us, to open up more opportunities. It allows all of our defensemen to jump up into play, and that just allows us so many more opportunities.”

Harlow and Stevenson’s defensive core have allowed Wood to sleep at night in the face of multiple absences.

“We have so much depth at forward that I don’t worry; I only worry if we’re missing (defensemen),” Wood said. “Nolan (Jones) and Will (Harlow) and (Zach) Meyers played every other shift tonight, and then (Mac) Fitzpatrick and usually (Brody) Stokes round it out.

“Will and Nolan can score, Nolan I put against everybody’s top line and in these last two games in particular I thought Nolan played extremely well.”

Wood applauded the day Jegers spent lighting up the scoreboard and liked what he got all over the ice.

“Cam Schneider had (three) assists and I thought he had a nice game, and I thought (Brandon) Schultz played really hard,” Wood said. “He moved pretty well. And another guy that doesn’t get talked about is (Zack) Kulick, who had a good game today and was moving really hard. I really liked the way he played. The depth we have at forward helps us, when we can keep forechecking even with our fourth line.”

GAME NOTES:
York
The Dukes would like to have their 1-0 loss to St. Ignatius during Loyola’s Thanksgiving tournament back. They lost on an own-goal and earned a 29-20 edge in shots over St. Ignatius, which ultimately moved on to play in the tournament’s title game against Loyola.
“Our own player scored on our own net so that was kind of a fluke,” Boeing said. “We out-played them the whole game and their goalie (Sebastian Wigfield) stood on his head. Our top guys had a few breakaways and just couldn’t find the twine.”
Stevenson and Loyola are currently slugging it out for the top spot in the SHL standings each week, but this season has proved that parity reigns supreme. Boeing echoed what the majority of the coaches in the league are likely thinking right now.
“Everybody has to be doing their part and we need to keep building it brick-by-brick to get ready for February and the playoffs,” Boeing said. “We’re headed in the right direction, the energy has been good, and we just have to find our way. I’m excited with how we’re playing and where things can go.”

Stevenson
Jegers didn’t point to specific areas of play that he liked from his side on Friday, as much as he liked an intangible that’s either there or it’s not.
“We just go out there, put our adversity aside, and work hard and have fun,” Jegers said. “We had no negativity on the bench and all we did was bring each other up. That positivity just keeps us going.”
Harlow agreed.
“We don’t act like a hockey team, we act more like a brotherhood,” Harlow said. “It’s like one big hockey family and that’s how we come out and play so well together.”
Shots on net and putting it in front keyed the offense against York but nobody at Stevenson wants the defense to go unheralded.
“Our defense? They just don’t let guys by and they played really well tonight,” Jegers said. “(York) liked to throw it in front and that’s where our ‘D’ was looking, so that’s basically what was key to the game.” 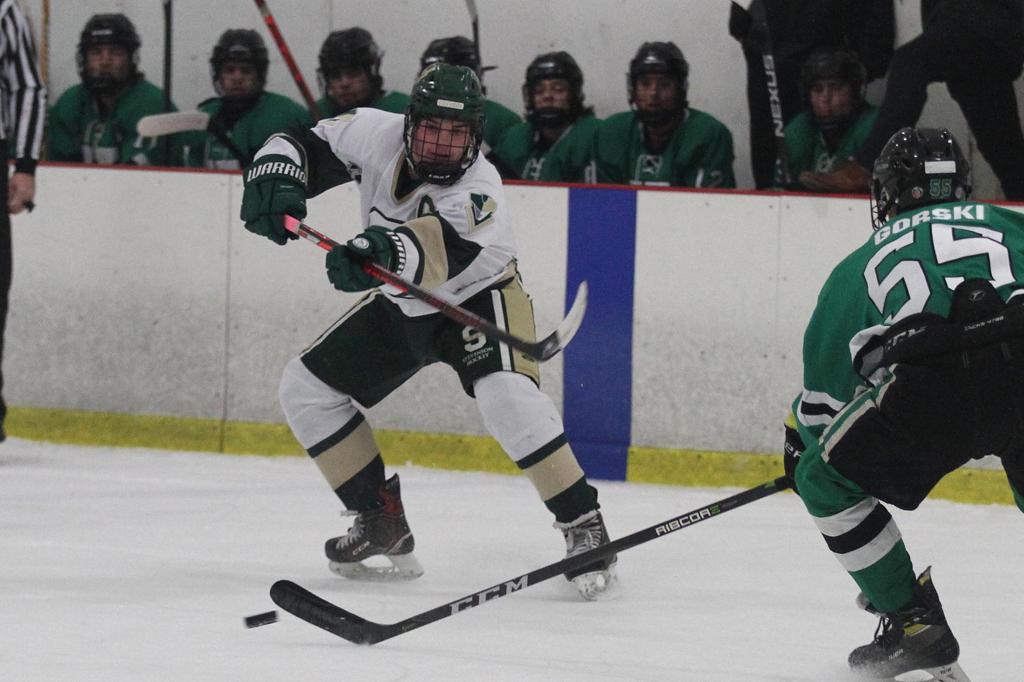 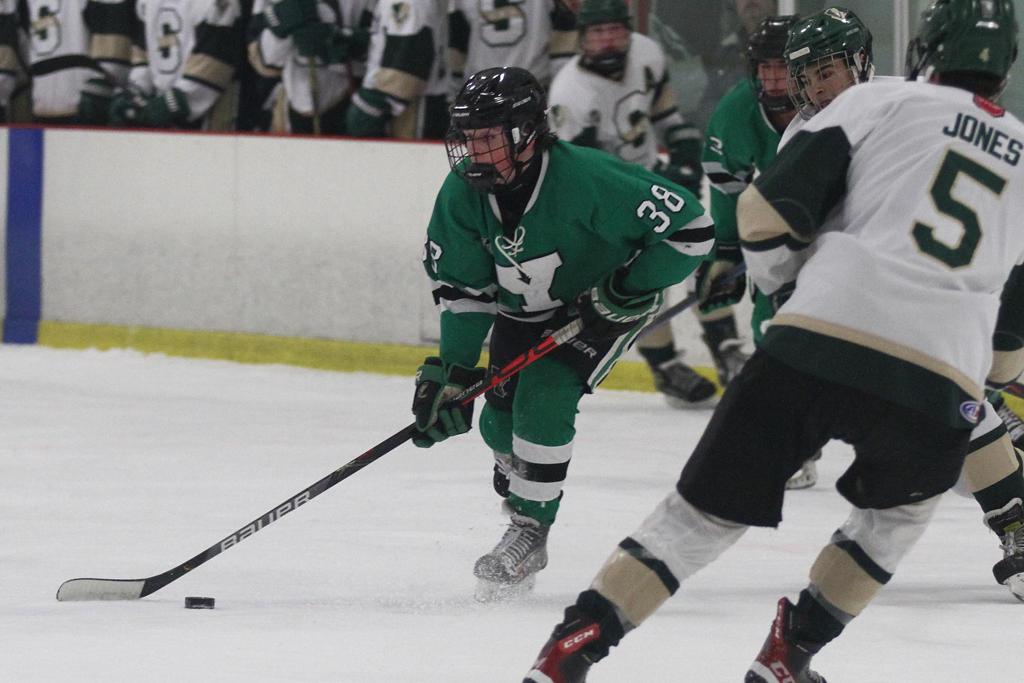 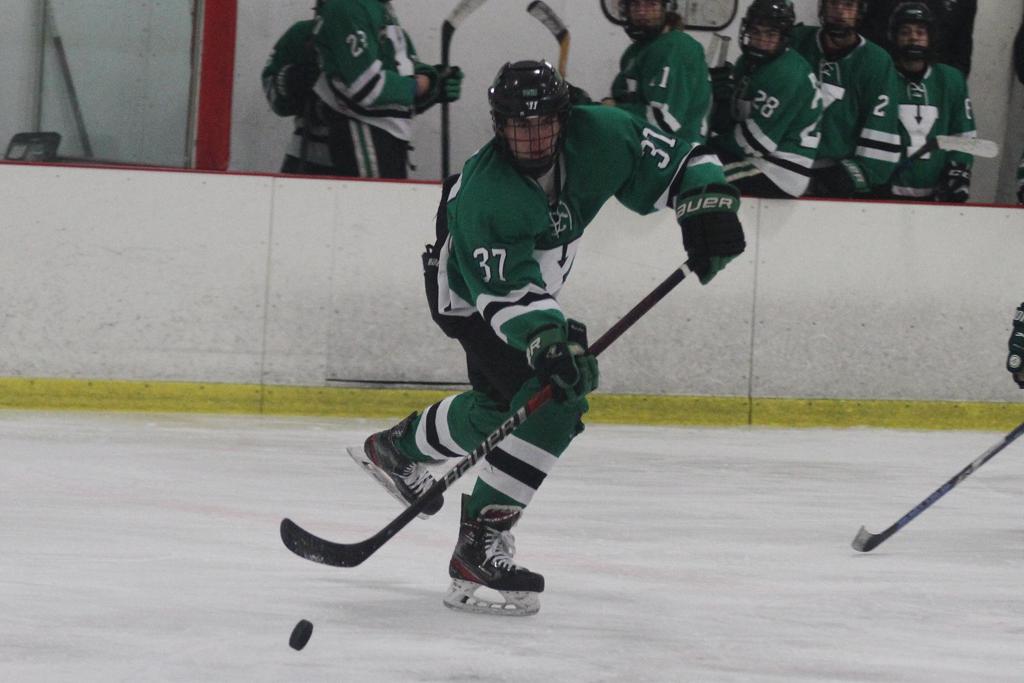 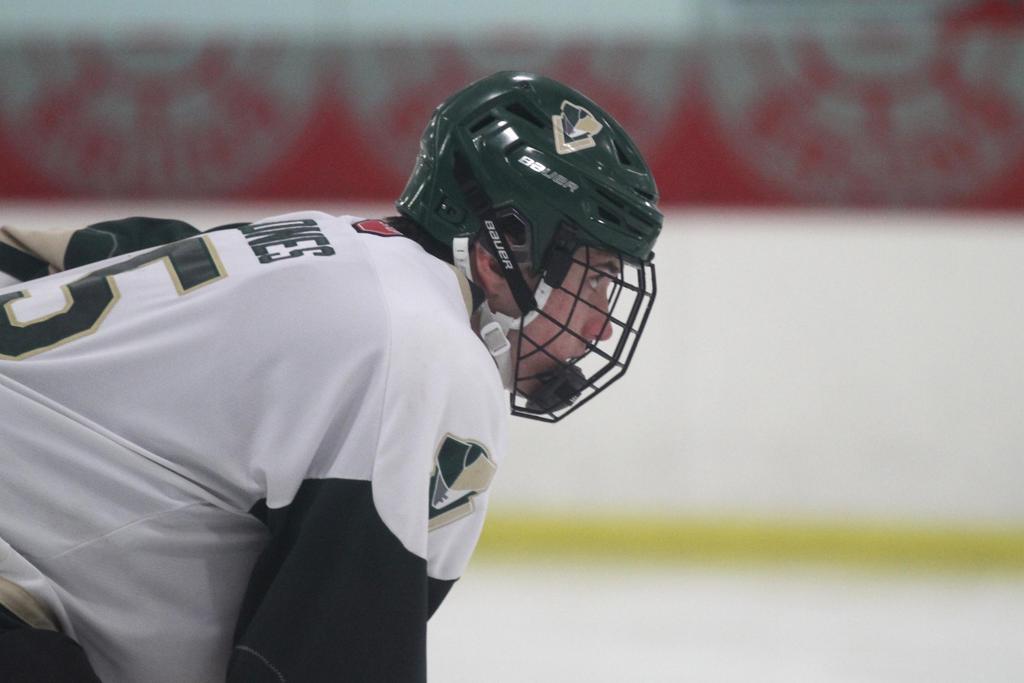 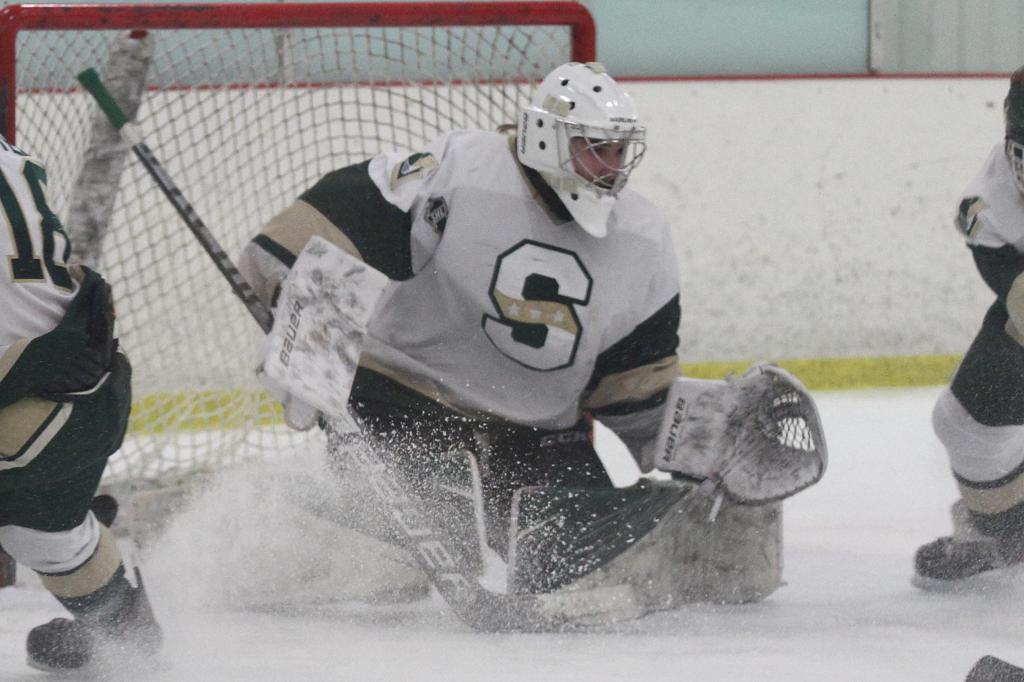 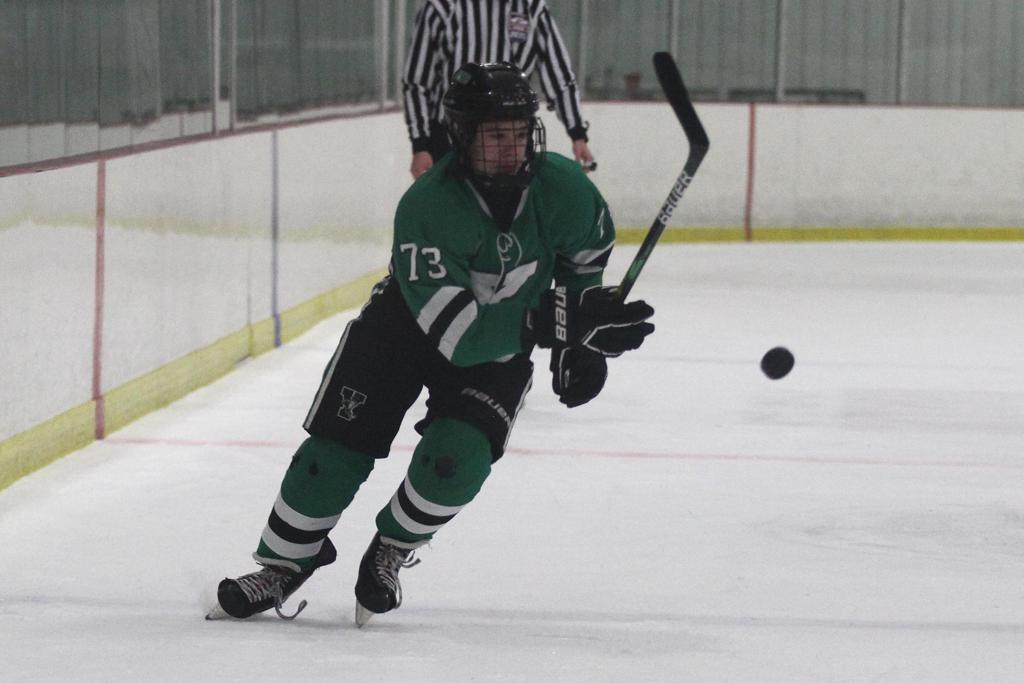 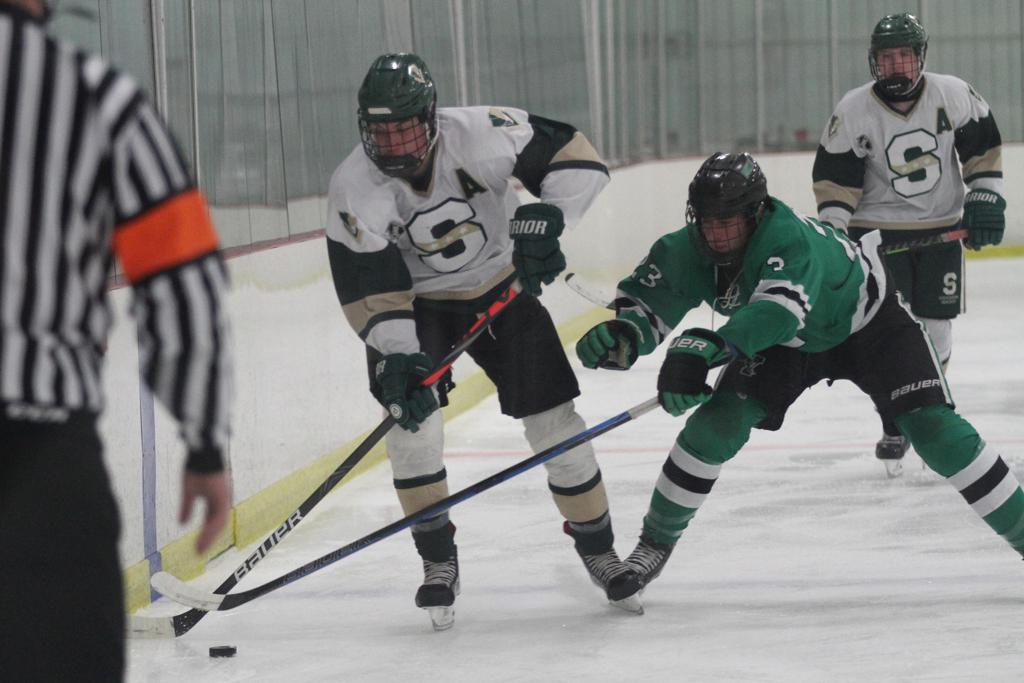 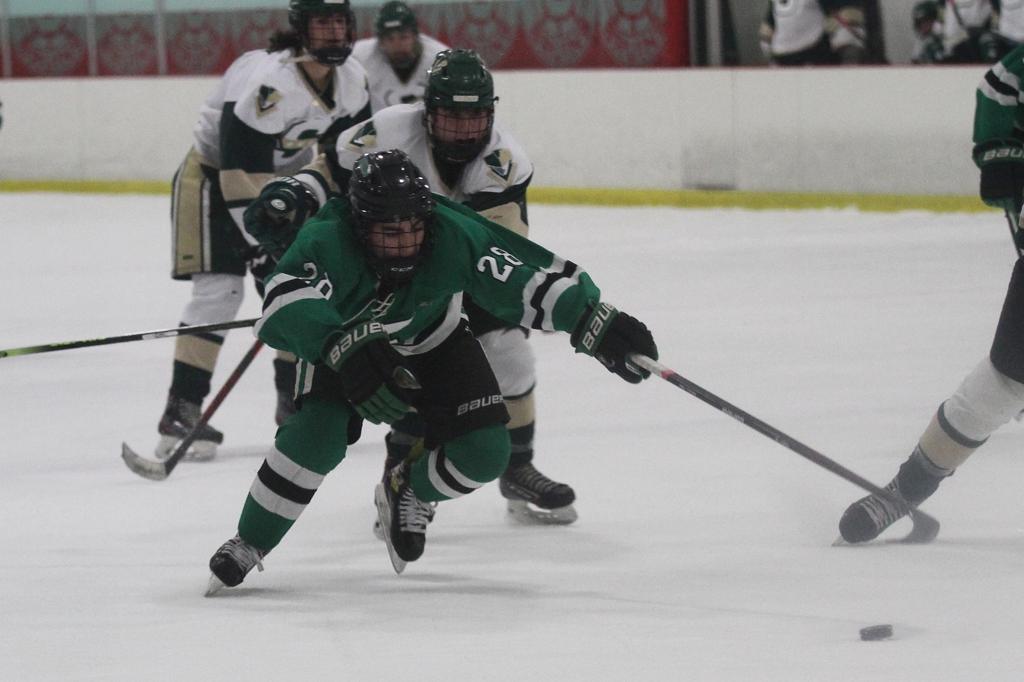 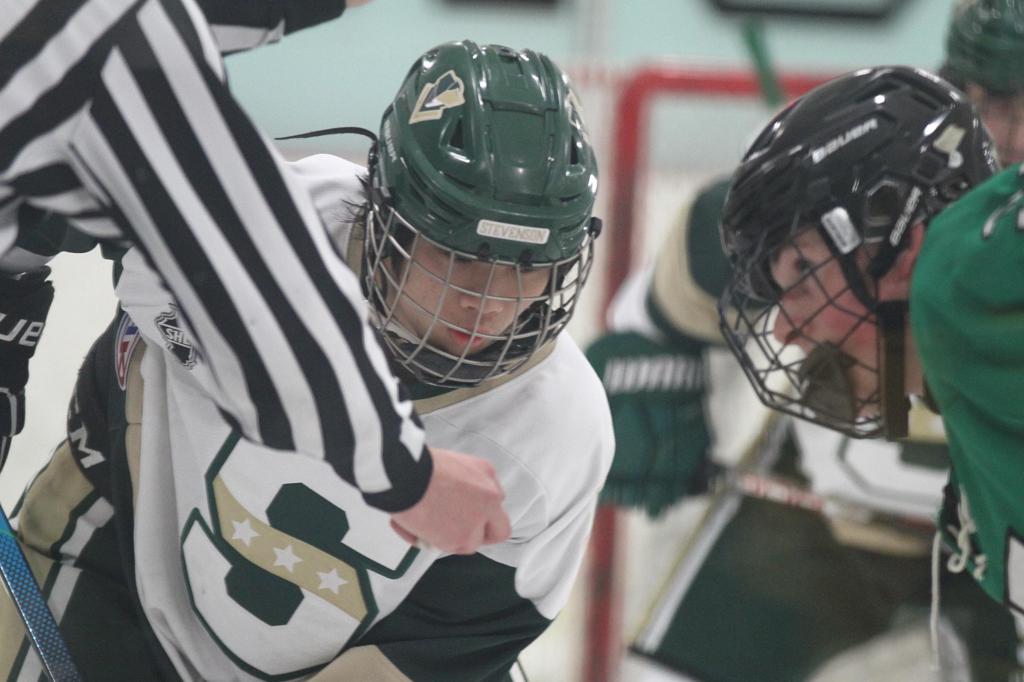 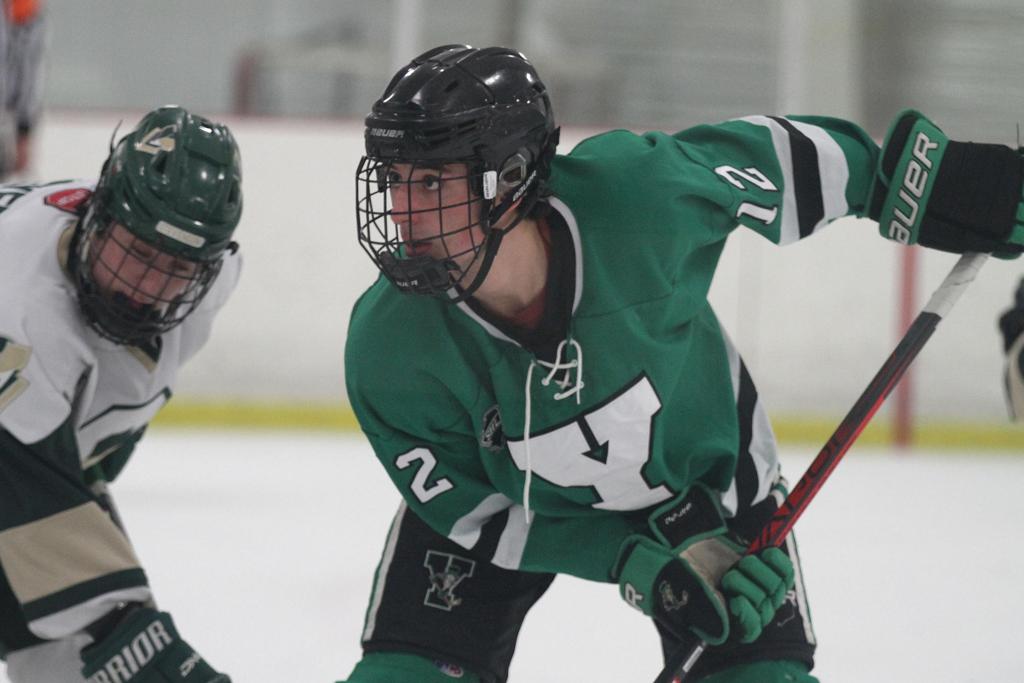 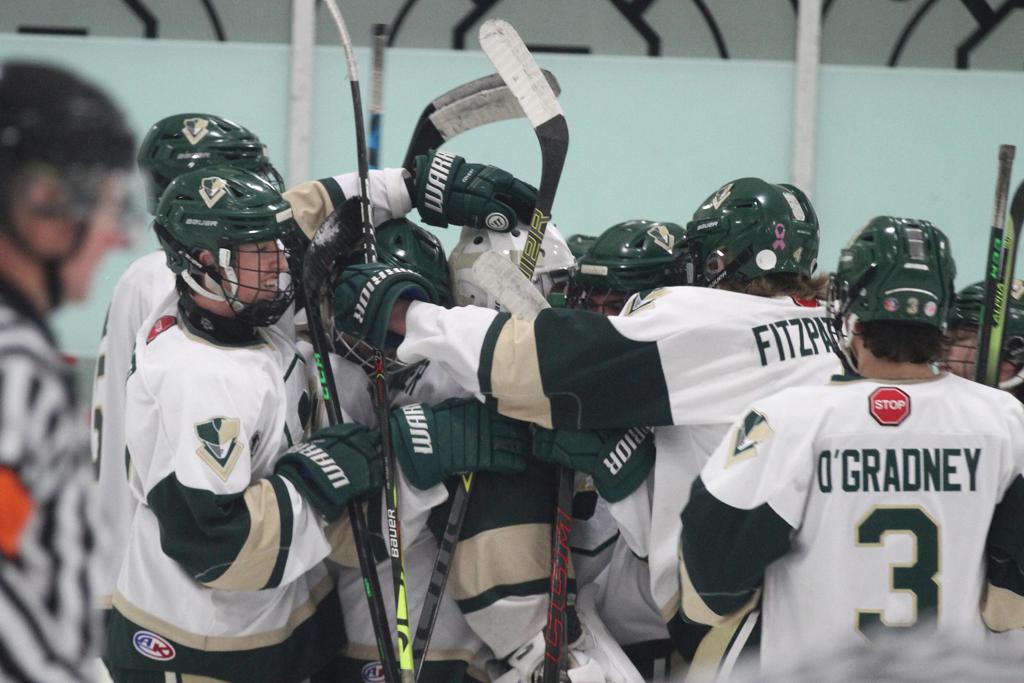