There’s always a packed house full of raucous students, parents, and alumni players, shoulder-to-shoulder with no room to move. $5,000 was raised and donated to the Northfield Food Pantry. Heck, after player introductions this year, the game even had Chicago Blackhawks’ Jim Cornelison there to sing the national anthem.

To top things off, the game itself saw North’s 15-year win streak in the rivalry game come to an end, courtesy of South’s 3-1 win on Wednesday at Centennial Ice Rink.

Papalas was the only South player who had previously played in the annual Thanksgiving game. Last year’s game was canceled due to COVID but Papalas was on the ice two seasons ago as a sophomore in a loss to North.

South sophomore Zach Freimuth played in his first-ever Thanksgiving game on Wednesday, but it certainly wasn’t his first time at the event.

“I’ve come to a lot of these games over the years and I’ve always dreamed of this. It feels unbelievable,” Freimuth said. “The crowd really gets you going and at first it’s all nerves until you get into it. Winning this game feels great. It feels amazing.”

South got a goal in each period from Jason Ban, Papalas, and then Erik Steenstrup, respectively, while North got a third-period goal from Michael Dimoff. North led 22-17 in shots on net through two periods before South outshot the Spartans 13-5 in the third to finish with a 30-27 edge.

“We played a smart game and stayed out of the box,” Philbin said. “We adjusted to some things we saw that they do, clogged up the middle in the neutral zone, and we didn’t want to give them chances because they’re a very good team.

“I think they came out and wanted to take bodies and that’s okay but we didn’t want to get involved in that. We wanted to be smart, move pucks, and get pucks to the net.”

If a 3-1 final score suggests it was a one-sided game, that suggestion is wrong. Philbin applauded his side’s play in the defensive zone against a North team that fought tooth-and-nail throughout.

“I thought we played good enough to win,” North coach Evan Poulakidas said. “They did a good job of shutting down our big line with their big line, but I thought we played a good game. I’m not unhappy with how we played. The result just doesn’t feel too good.”

North spent the game’s first three minutes or so in its offensive zone before South began finding breakouts. Papalas and North’s Owen Just each found a shot to the game’s 13-minute mark.

One power play each way was killed in the first period before North goalie Drew Karchmar stopped shots from Freimuth and South’s John Mulvey. South goalie Luke Winger survived a wild scrum in front of his net with roughly two minutes remaining in the first period.

South went on the power play for its second time with just under a minute remaining in the first period, and Ban made it count, burying a shot from the left side at a tough angle on assists from Mulvey and Mason Dolby.

“I’m proud of the guys and proud of our forwards. Every line scored a goal today,” Philbin said. “And that’s what we want — to spread it out a little bit.”

North applied second-period pressure in answer to its one-goal deficit but Winger and the South defense was up to the challenge.
“(Mason) Dolby, (Owen) Almburg, (Jackson) Hill, (Adrian) Sokol, Jimmy Benedetti, (Finn) Boland — all those guys played so hard,” Philbin said. “And then Luke (Winger) controlling the second period when we got a little sloppy in our zone, and controlling pucks.”

It was Papalas who likely changed the face of the game, as the final minutes of the second period arrived. Papalas took a puck along the boards on the left side in the neutral zone and built a head of steam on his way to the net.

“D-man stepped up, I saw some space and poked it by him, and drove straight to the net,” Papalas said. “I saw some space, and just had to kick in the burners.”

Papalas’ goal came with 2:29 remaining before intermission and stood as a gut-punch to North.

“The key goal was the breakdown in the second period when they scored late,” Poulakidas said. “We talked about it and you just can’t give that goal up.”

North cut the lead to 2-1 on Dimoff’s goal early in the third period, on assists from Joshua Pick and Conor Katsamakis. But South didn’t buckle, playing smart and sticking to its game plan until Steenstrup put an exclamation point on the win.

South won a puck near the blue line on the left side at the boards, and Steenstrup took a stride forward toward the net before burying the game’s final goal with 5:50 remaining. Sokol got the assist on the play.

When it was over, Papalas spoke to the way his boys approached this year’s rivalry nail-biter.

“The key, really, was not taking the game too seriously and focusing on playing for each other, and not all the people in the crowd,” Papalas said. “Play for each other, have some fun, and that’s how we’d play to the best of our abilities.

“This year more than any other year, we’ve got a lot of people and fans coming to our games. It just takes a little bit to learn to focus on the game on the ice and not worry about the other side of the glass.”

GAME NOTES:
Glenbrook North
Coming into the season, Poulakidas never would have foreseen his side’s current struggles to score. The Spartans were outscored 15-2 in consecutive losses to Loyola, New Trier and Glenbrook South.
“I’ve tried every combination, to move big defensemen up to play forward, and I thought we got a big push from our defensemen tonight,” Poulakidas said. “Sometimes you just go through this and you just don’t want it to be season-long.
“Ever since the York game, when we scored six, we’ve been in a slump We have really good, skilled players but unless we start going to the net better, we’ll have this problem. We have to find rebounds and that’s what the game’s about.
“The kids were pretty devastated with this loss but like I told them, when you play good it can still be kind of random in terms of the result. Because I thought we did a really good job of pressing (GBS) and I thought our pushback was great.”

Glenbrook South
Freimuth has been consistently solid for South all year as a sophomore, and he liked what he saw in his first Thanksgiving game against GBN.
“We were chipping pucks out really nicely, the defense played incredible, Winger played incredible, and we were forechecking hard,” Freimuth said. “Nobody was trying to do individual stuff. We were playing as a team and playing together. We do a lot of stuff to build team chemistry off the ice and it all helps us once we get out there.”
The multiple hundreds of student fans from both schools that pack the annual game are, at this point, a given in its 32-year history.
“Everybody hears it from the older kids that you have to be at this game,” Papalas said. “This week and the week before we’re selling shirts outside the cafeteria at school, selling tickets, posting all over instagram — so everybody knows about it.” 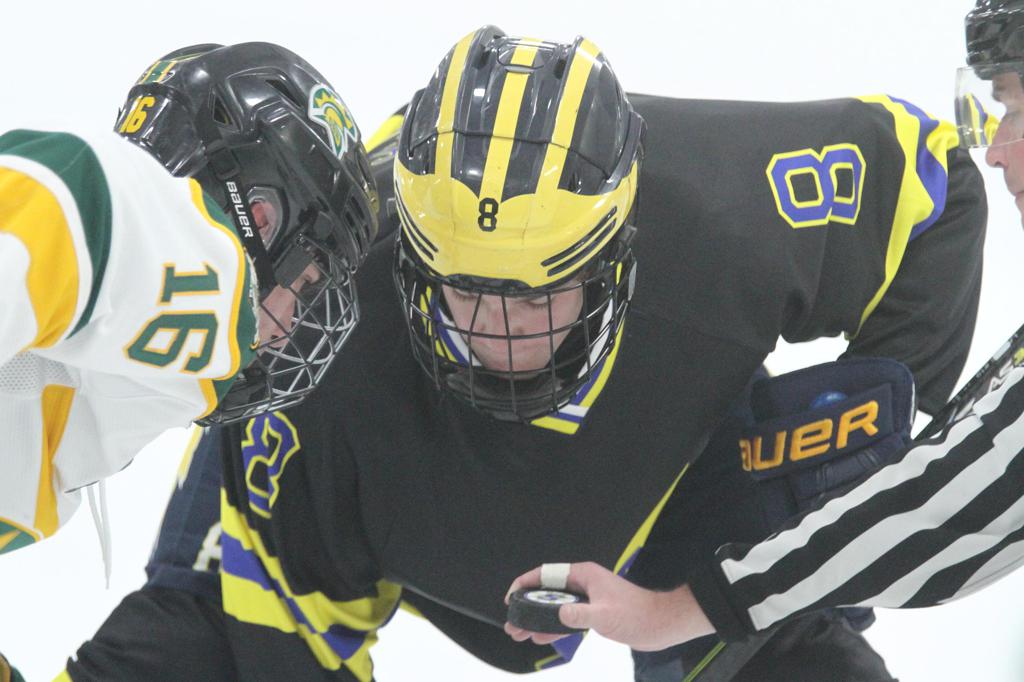 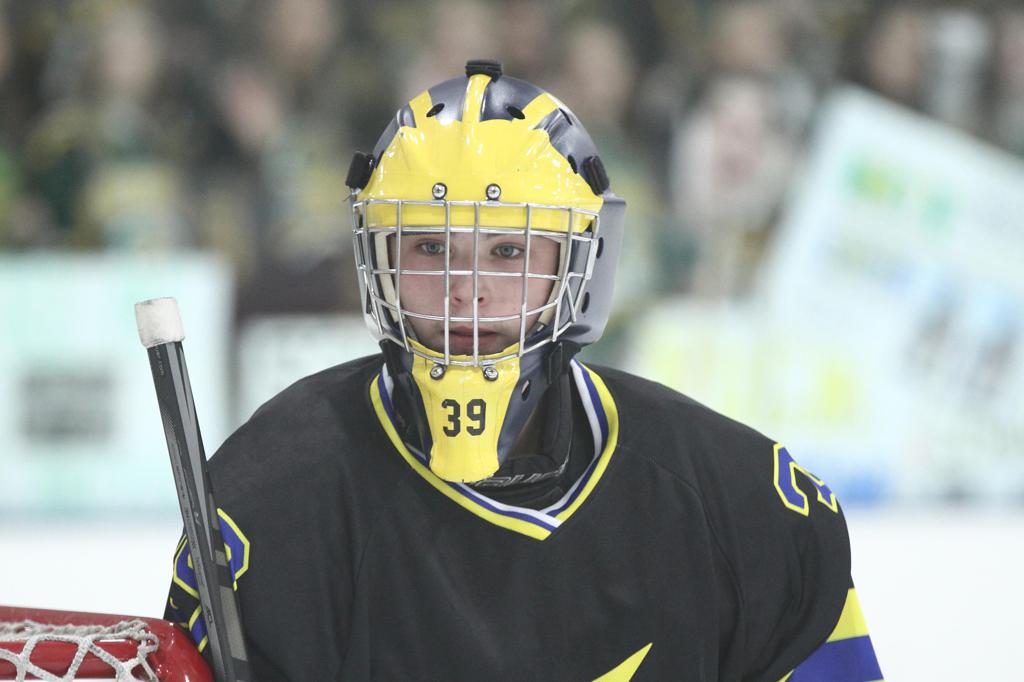 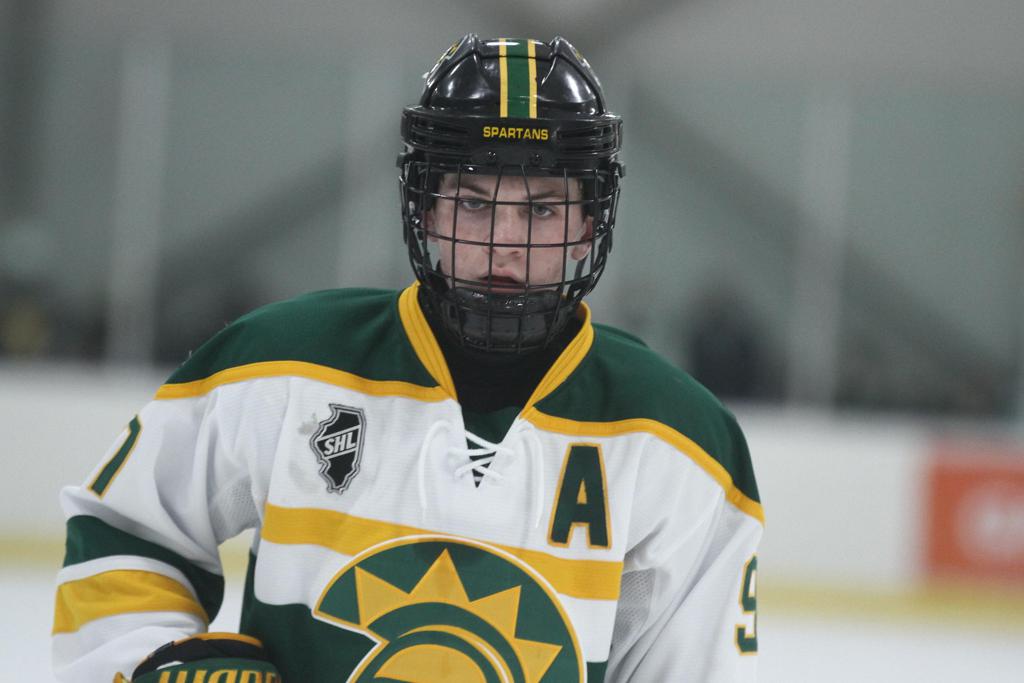 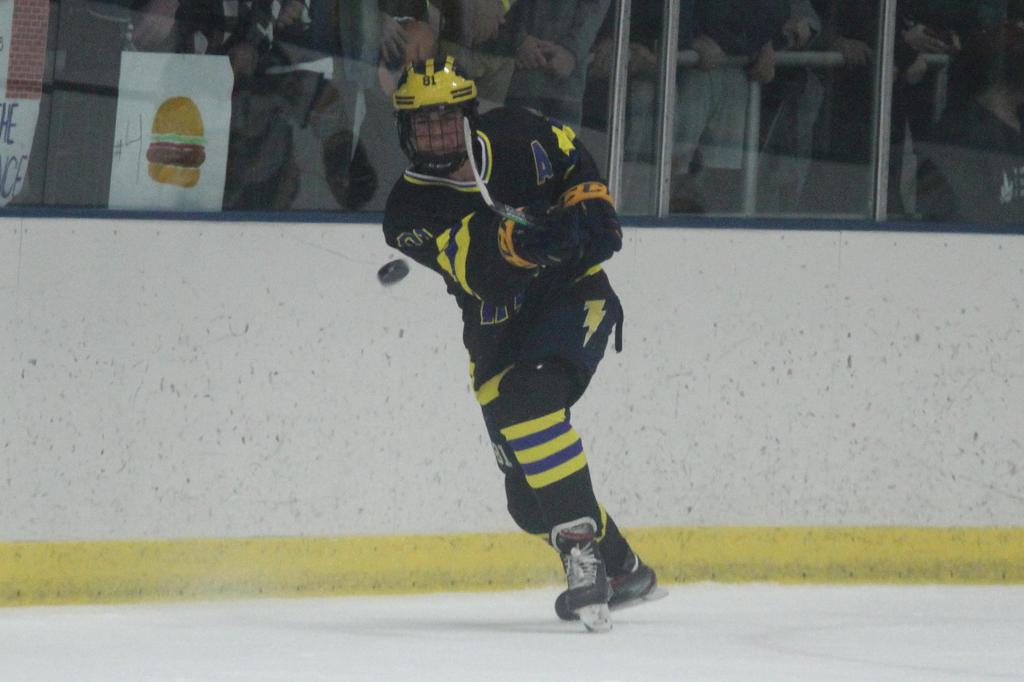 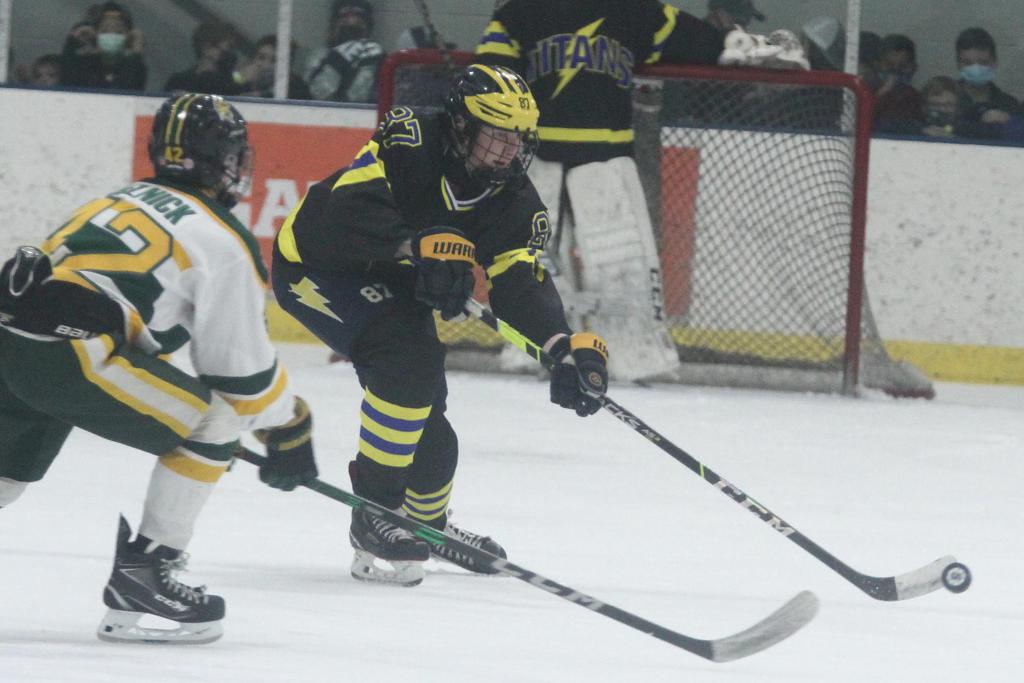 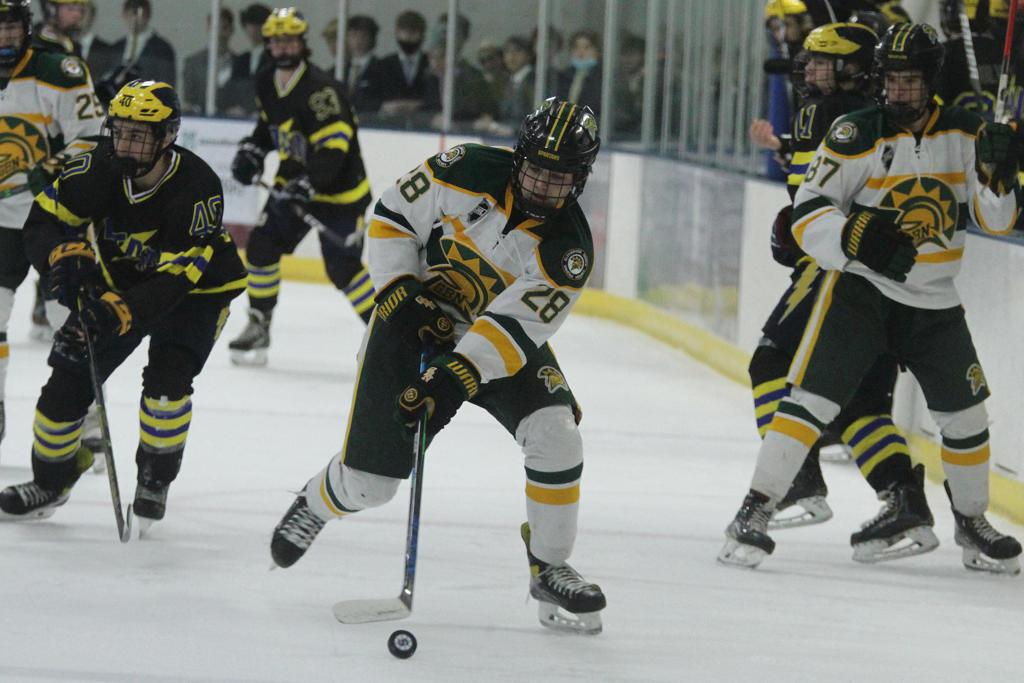 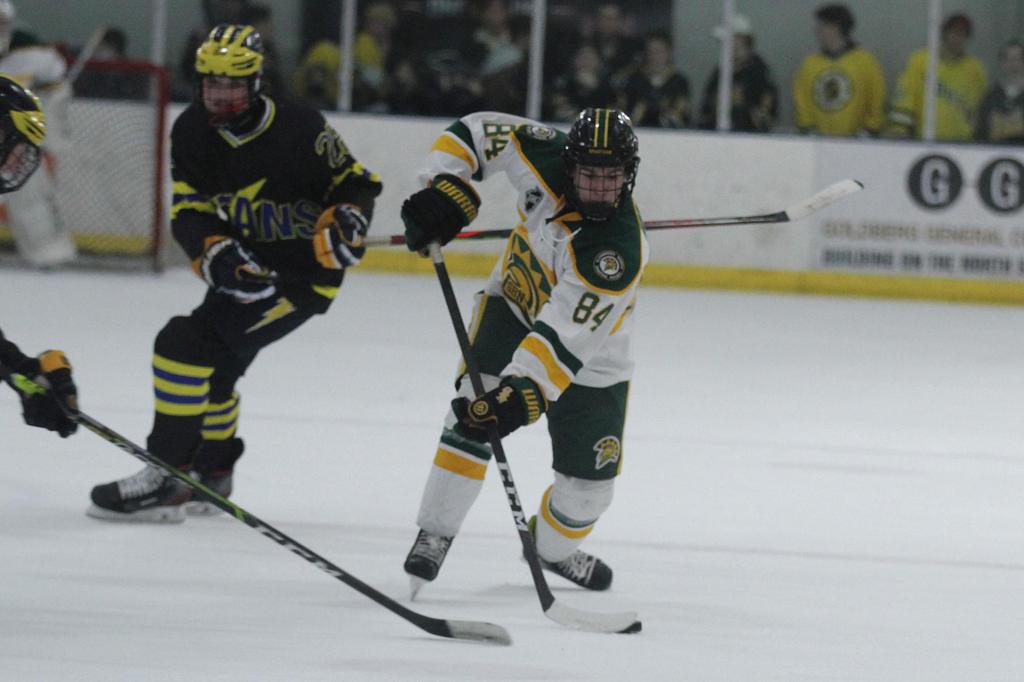 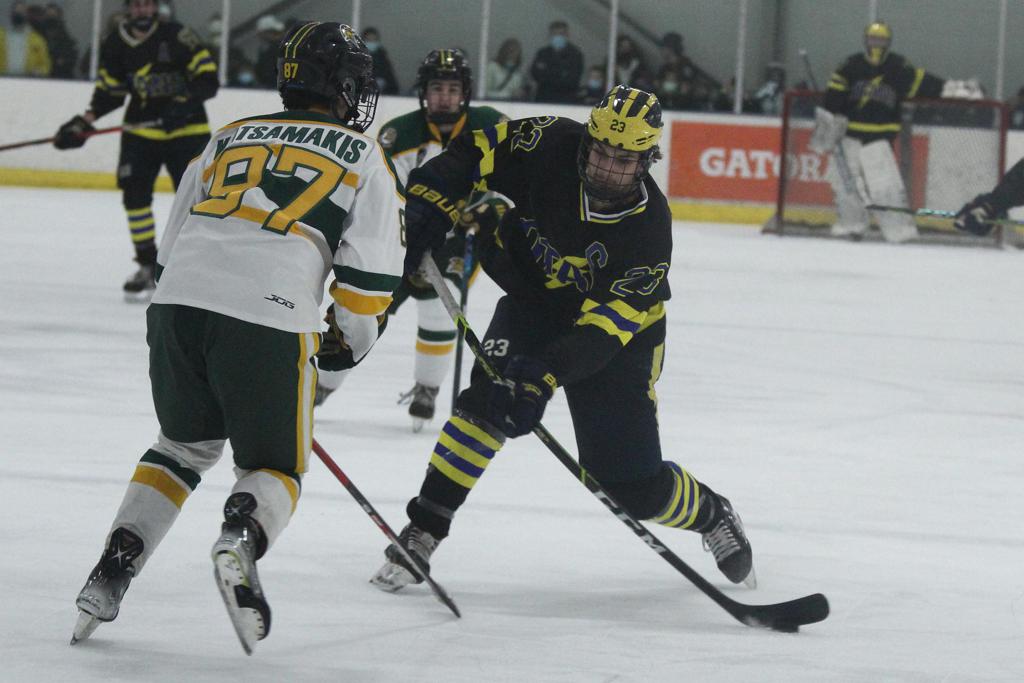