GLENVIEW -- When Saturday’s game between Stevenson and host Glenbrook South entered the third period, the game was dead even on the scoreboard.

Stevenson broke a 1-1 tie by scoring three goals in the third period to win 4-1 and improve to 7-3 in SHL play.

“We always play really well in the third period,” Stevenson forward Davis Jegers said. “As a team we have a lot of depth and I think that allows us to last longer than other teams. We play all of our lines and I think we have an advantage there.”

It was Jegers who sparked Stevenson’s third-period roll, intercepting a clearing attempt with South goalie Luke Winger off his line and burying an empty-netter at the 10:26 mark.

Jegers also assisted on the game’s first goal, scored by Dylan Jette with 35 seconds remaining in the first period. A John Mulvey goal in the second period tied the game for Glenbrook South

After Jegers broke the 1-1 tie, a 13-5 third-period edge in shots for Stevenson led to goals from Andrew Lermer and Ethan O’Gradney before the final buzzer put the game to rest.

The third period didn’t start out in Stevenson’s favor. Glenbrook South came out after intermission in high gear and went on the power play at the 12:14 mark.

But Stevenson killed off nearly all of that penalty before Jegers scored his shorthanded goal to give the Patriots a lead they would not relinquish.

“I was getting very nervous because (Glenbrook South) was kind of all over us at the start of the third period,” Stevenson coach Tom Woods said. “But we’ve kind of done that in the third period all year, almost. We’ve won a bunch of games at the end this year.”

The first period saw Stevenson earn an 11-5 edge in shots. Stevenson’s Rafael Biedron and Jake Topel found early shots stopped by Winger, while Glenbrook South’s Will Papalas and Jason Ban had a few looks to the game’s 13th minute.

Jette finished at the far post on a feed from the left side by Jegers to give the Patriots their 1-0 lead.

“We’ve been playing together since kindergarten,” Jeger said of he and Jette. “We trust each other and we always know where each other is going to be.”

Glenbrook South answered in the second period. Carter Erickson nearly found Zach Freimuth at the far post for the Titans on a 2-on-1, and Stevenson goalie Jonathan Adler stopped shots from South’s Brad Southwood and Erik Steenstrup to the 6-minute mark.

“(Papalas) is getting chances and that was a good example of us getting more pucks on net,” Philbin said. “The support around that, after the rebound is coming after they don’t go in — that’s the next step. You have to be aggressive.

“Look at Stevenson’s goals — they were nitty, gritty, hungry, rebound goals. That’s the style that everyone plays because at this level you’re not just gunning it in from thirty feet out. In our league, that’s not going to happen.”

Mulvey struck for the second time in as many games at the 3:04 mark of the period, redirecting a Mason Dolby shot from the point created off a Ban feed.

After Jegers gave Stevenson its 2-1 lead in the third period, Lermer scored at 3:38 on assists from Will Harlow and Cam Schneider. O’Gradney’s goal came unassisted at 2:36 to end the day’s scoring.

“I thought both teams played well,” Woods said. “They played good, tight defense and had plenty of opportunities that we gave them and that they created themselves. It could have been either team’s game. I think towards the end of the game we just had a little bit more energy.”

“I thought (Adler) played great and Davis (Jegers) and Dylan (Jette) have been kind of carrying us this year,” Woods said. “They’re the guys we ask to put the puck in the net.”

“I also thought (James) Mendelson had a good game doing the little things — finishing checks and blocking shots — and Davis (Jegers) played one of his best games for us. He was all over the place.”

Through 10 league games for Glenbrook South, Freimuth and Mulvey are tied for the team lead with 4 goals apiece, while Erickson has a team-leading 7 assists and Papalas has 5.

“I think we need to generate more offense and quality chances,” Philbin said. “We’re not getting the bounces right now but we’re not playing bad. But we can also make more of an offensive push than we are at the moment.

We know Stevenson has a lot of firepower and they’re deep in their lines, and their ‘D’ is really strong and they were aggressive. They did their job. And against a team like Stevenson, a good defensive team, it’s hard to come back and get those goals.”

Game notes:
Stevenson
Jegers and Jette have been together on the ice since childhood, and Woods is happy the two have brought their chemistry to the Patriots first line.
“Davis is always at the net and he just has a nose for scoring,” Woods said. “He’ll position himself in those dirty areas where most people don’t want to be. He doesn’t score fancy goals, it’s mostly on rebounds, or tipping pucks I the net. Jette is our skill guy and the two of them have played together a lot so you get a big guy and a skill guy, and then we usually throw a guy in there who forechecks like (Max) Poretto who did a good job of that today.”
For his part, Jegers appreciated efforts put forth around the ice for the Patriots.
“Adler played really well, (Zack) Kulik and (Brandon) Schultz always keep their feet moving, and Dylan’s game awareness is just really good,” Jegers said. “He just always knows where to be and where to pass the puck.”

Glenbrook South
The Titans Jason Ban started out as a defenseman as a sophomore last year, but Philbin had a suspicion.
“Every game I pulled him up for, I had him play on a forward line and I think he scored in every game we put him there,” Philbin said. “He does a lot away from the puck, too, with his presence. He’s got a great stick, he’s defensive-minded, and I’m just really proud of how he plays and how hard he plays every time he’s out there.”
Ban stood out against Stevenson.
“He didn’t stop,” Philbin said. “He played a great game again with his body, his energy. I’m so proud of him. That’s the kind of nit and grit you need in this game.” 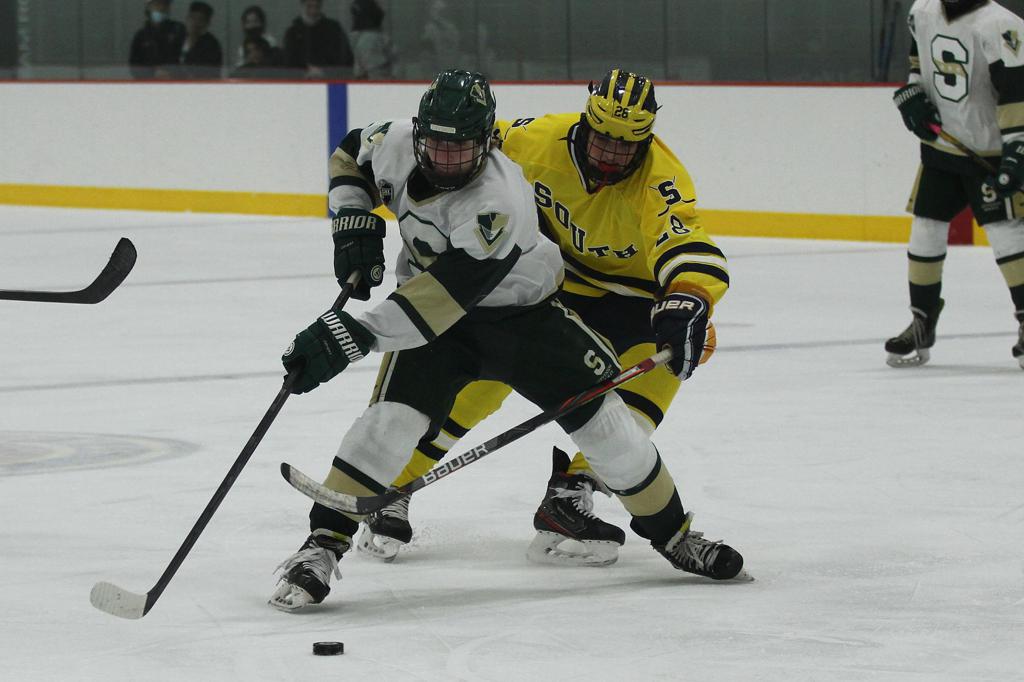 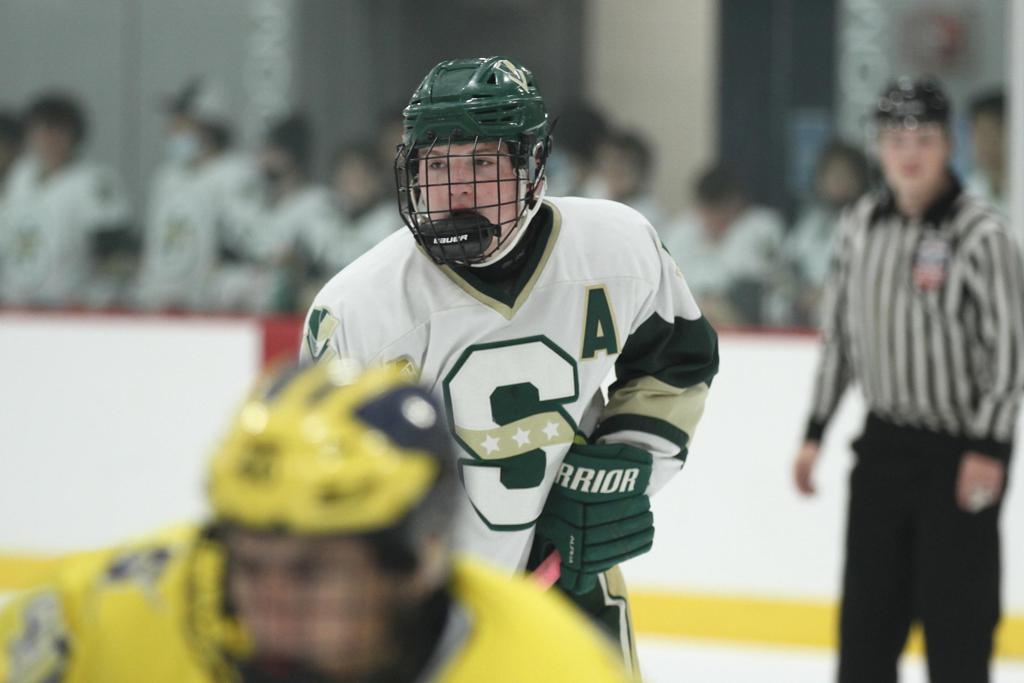 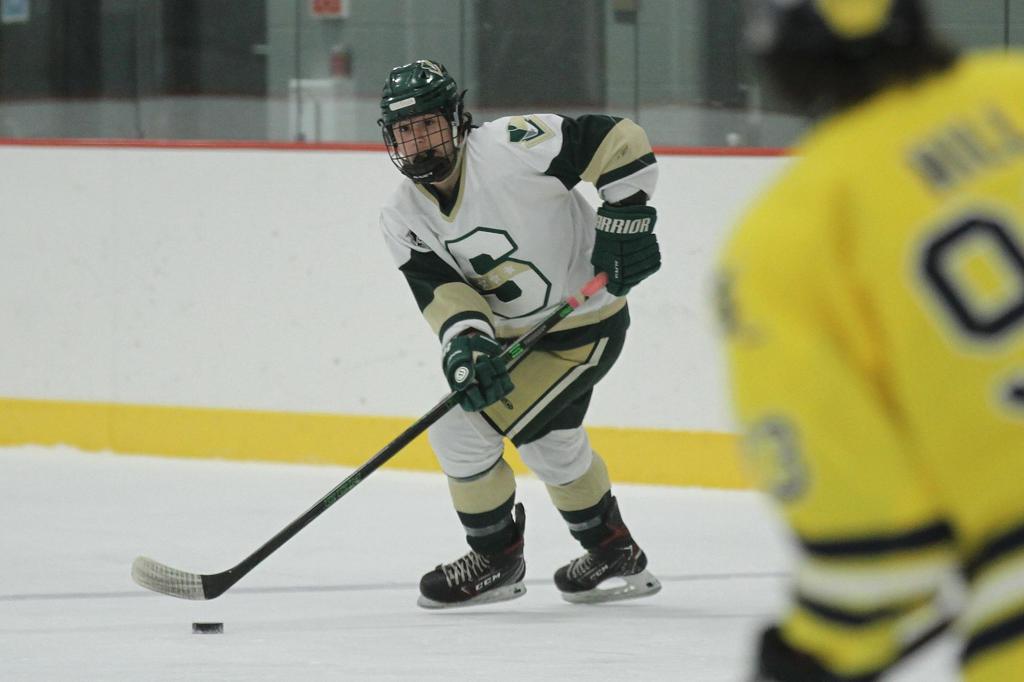 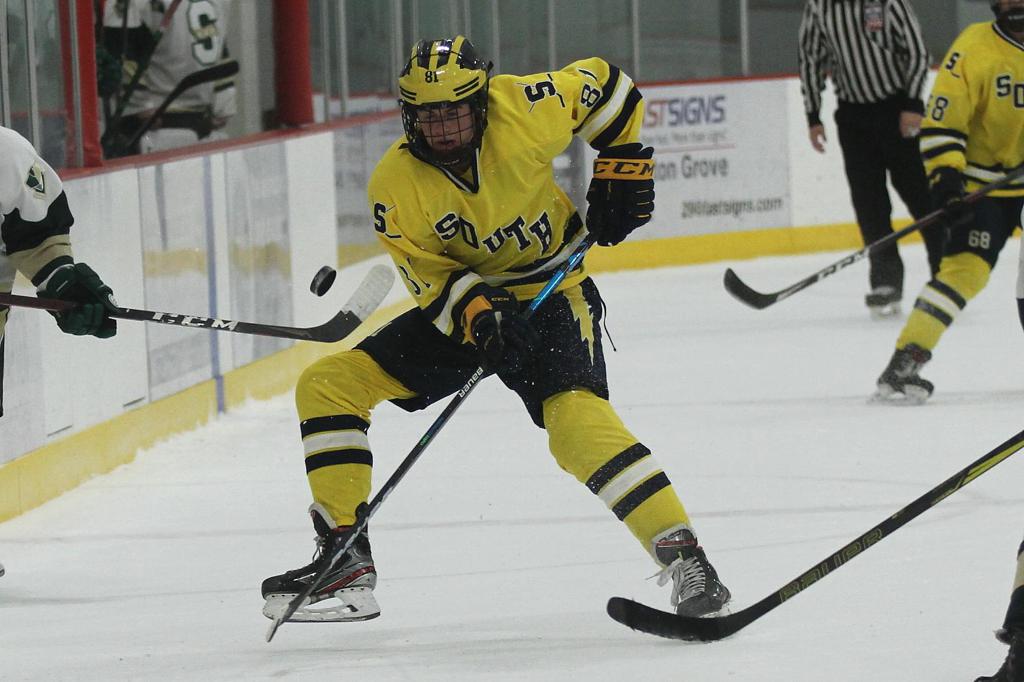 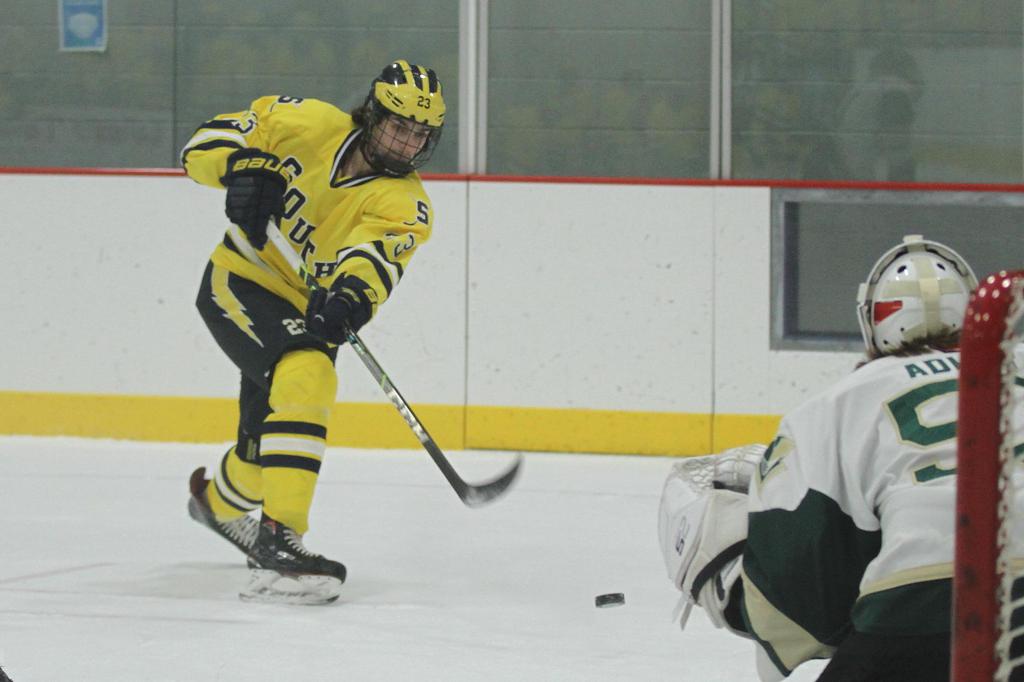 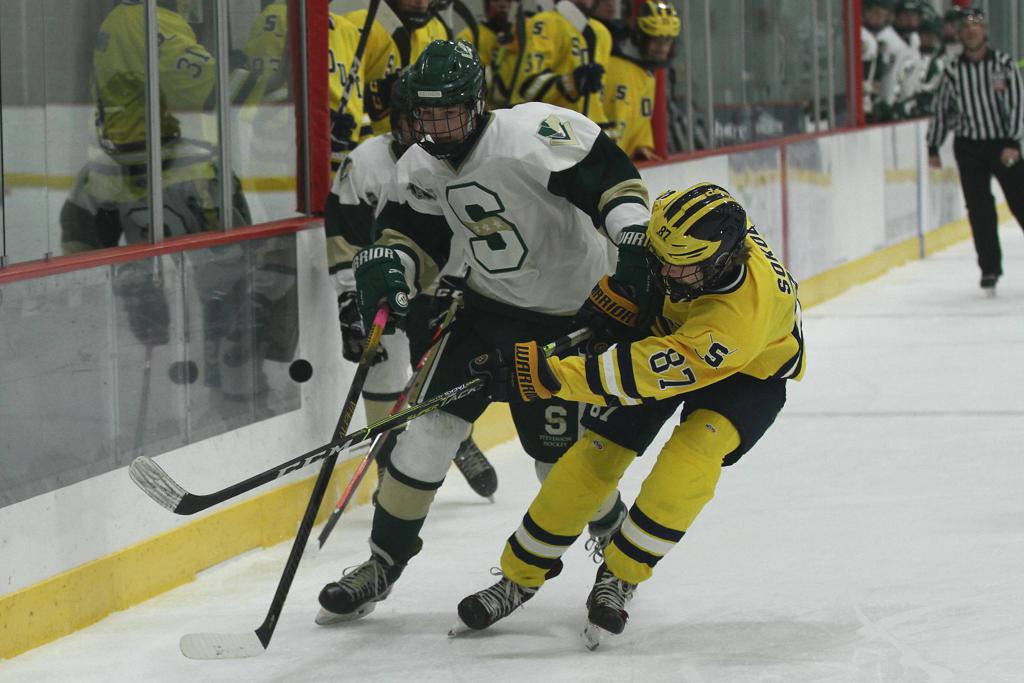