By Gary Larsen
WINNETKA — Trailing Glenbrook South in a 1-0 game, New Trier Green headed to the locker room after two periods and then emerged with all the urgency that the third period called for.

The official box score for Wednesday’s game showed that the Trevians posted a 17-1 third-period edge in shots over the Titans; still, with less than five minutes remaining, a second-period goal by South’s John Mulvey and a South defense anchored by goalie Luke Winger had met every challenge.

First, at the 4:45 mark of the third period, the New Trier senior forward took a shot from the right side, low-circle, sending it into a crowded goalmouth. Faulkner’s shot redirected into the net off a defenseman’s skate to tie the game.

“They don’t ask how, they ask how many,” Faulkner joked afterwards, “Coach told us to put pucks on net and good things would happen so once we got possession, we just started firing everything we could on net.”

The 1-1 tie remained through the end of regulation and the overtime period, setting up a shootout. That’s when Faulkner put on his white hat, rode up on his white horse, and played the hero for New Trier, scoring the only goal of the shootout to give the Trevians the win.

Winger played outstanding in net, particularly in the face of New Trier’s third-period pressure, but Faulkner was just a little bit better on his shootout chance.

“(Faulkner) made a move and and went five-hole on Winger cutting back, waiting for Winger to open his legs up. From the bench it looked like Winger had the puck. But then you see (Faulkner) celebrate and I’m like ‘damn, that kid’s good’. He’s fast and his hands are so smooth. That was a beautiful goal.”

Glenbrook South went 0-for-3 against Durdov in the shootout.

For more than 46 minutes of hockey, Glenbrook South (3-2-0 in SHL play) held New Trier (6-1-0) at bay. The two teams have now played each other four times in the young season and South’s game plan was to slow New Trier down, a plan the Titans executed well for nearly the entire game.

“Glenbrook South did a great job defensively,” New Trier coach Bob Melton said. “They took away a lot of what we like to do and I give them a lot of credit. But we kept coming in that third period and found a way to score that (tying) goal.”

New Trier earned a 5-3 edge in shot in the first period. Henry Chessen, Jack Hawkins, and Tyler Smith all found shots but Winger was on the spot.

Winger made a point-blank stop on New Trier’s Kitchel Snow to start the second period, before Glenbrook South began to establish its offensive presence. New Trier goalie Drew Durdov stopped South’s Jackson Hill on a pair of shots and stopped another quality scoring chance off the stick of South’s Will Papalas.

A Glenbrook South power play at the 8:24 mark of the second period proved fruitful, with Mulvey scoring early in the power play for the game’s first goal.

“That starts with Mulvey winning the face-off, (Brad) Southwood and (Jason) Ban get in to get the loose puck behind him and get it to the point,” Philbin said. “Then a nice quick shot from (Mason) Dolby on net, and Mulvey went right to the net. When you go to the net good things can happen, and he was able to bang in a rebound.”

New Trier went on the power play with 2:52 remaining in the second period. A wild scrum in front of South’s net gave Winger ample opportunity to make a few sprawling stops in a crowded goalmouth before the period ended.

Chasing a goal, motivational steam was easy to generate in New Trier’s locker room at intermission.

“The captains got us together in the locker room and we had a good start to the third period,” Faulkner said. “It was a lackluster effort in the first period but we got it together. We talked about all the hard work we put in at practice and how we didn’t want it to go to waste."

Papalas fired on net early in the third period and Carter Erickson nearly got onto the rebound at the back post, before a New Trier power play seemed to ignite the Trevians.

Winger made a fine glove save on a Smith shot around the 11-minute mark, and gloved another shot from Landon Douthit a minute later. Douthit found a pair of shots to the 8-minute mark and Winger saved a Joseph Rabinowitz shot from the point at 7:18.

Faulkner’s goal came with 4:45 remaining in the game, scoring his team-leading 14th goal of the season.

“We usually have a number of players with a knack for scoring. We don’t have that this year,” Melton said, “but (Faulkner) has it.”

Douthit and Faulkner sent shots wide to the 3-minute mark, and Durdov had his biggest moment of regulation play with less than two minutes remaining. South’s Zach Freimuth stole a puck in the neutral zone and darted ahead, going in alone on Durdov only to have the Trevians’ sophomore goalie make the stop.

Chessen, Hawkins, Will Kroeger and Will Cusick all found shots in during the 3-on-3 overtime period, but Winger stood up.

Faulkner started the shootout with the only scoring chance that would be converted and Durdov was mobbed by teammates after Glenbrook South’s third shot of the shootout went for naught.

Melton applauded his sophomore goalie for the effort and liked what he got from one particular group of Trevians.

“The line of (Joe) Budington, (Henry) Miller and (Jaden) Sauer had some really good shifts,” Melton said. “They didn’t score but those were good energy shifts. They were all over the place. And Faulkner has really stepped up for us.”

Glenbrook South may have been disappointed with the final result but the Titans departed Winnetka happy with their effort against the Trevians.

“We played a great game, really well-balanced hockey for three periods, and we played well in the overtime,” Philbin said. “New Trier is one of the top two or three teams in the state, in my opinion.

“I thought Winger played a great game. I thought the shot opportunities we gave New Trier were low-percentage shots. We weathered the storm in the first five or ten minutes, and then played a pretty up-and-down game with them. I’m pretty happy with the game and we got a point on the road, so I’ll take it.”

GAME NOTES:
New Trier
During preseason tryouts, it wasn’t even certain that Faulkner would have a role on New Trier’s Green team. But he impressed the coaching staff, made the team, and now leads New Trier in total goals with fourteen.
“I didn’t know him at all but he just kept showing that he clearly belongs,” Melton said. “I’m so glad we took him and he’s been great for us.”
Faulkner just gritted his teeth and got it done in the preseason.
“I was a little nervous during tryouts but I trust in my game and I put my best effort out there,” Faulkner said. “I think (Melton) just saw that I could help the team. Not a lot of people were confident in this team but once we all made the team, we got out there and started moving the puck well and we’ve started to build chemistry.”

Glenbrook South
Philbin applauded defensemen Owen Almburg, Mason Dolby, Jackson Hill, and Jimmy Benedetti for their role in slowing down New Trier, and liked what he got from forwards Jason Ban, Brad Southwood, Carter Erickson, and Zach Freimuth.
“Those were really our primary penalty kill guys tonight,” Philbin said. “We also still haven’t played with a full squad. We still have a lot of kids out, so there are a lot of kids jumping in for us that haven’t play a lot. It’s nice that they’re getting that experience but we’d also really like to play with a full team as well.”
As the Titans get healthy, they know they can count on Winger.
“Luke’s asset is that he can play the on dump-ins,” Philbin said. “He gets out there quick, he has a quick release and he gets it out to the wing or into the neutral zone. That can create havoc for teams that just want to dump pucks.
“He was a little mad about giving up the shootout goal, but he’s competitive and he doesn’t think any goals should ever get in. That’s who he is.” 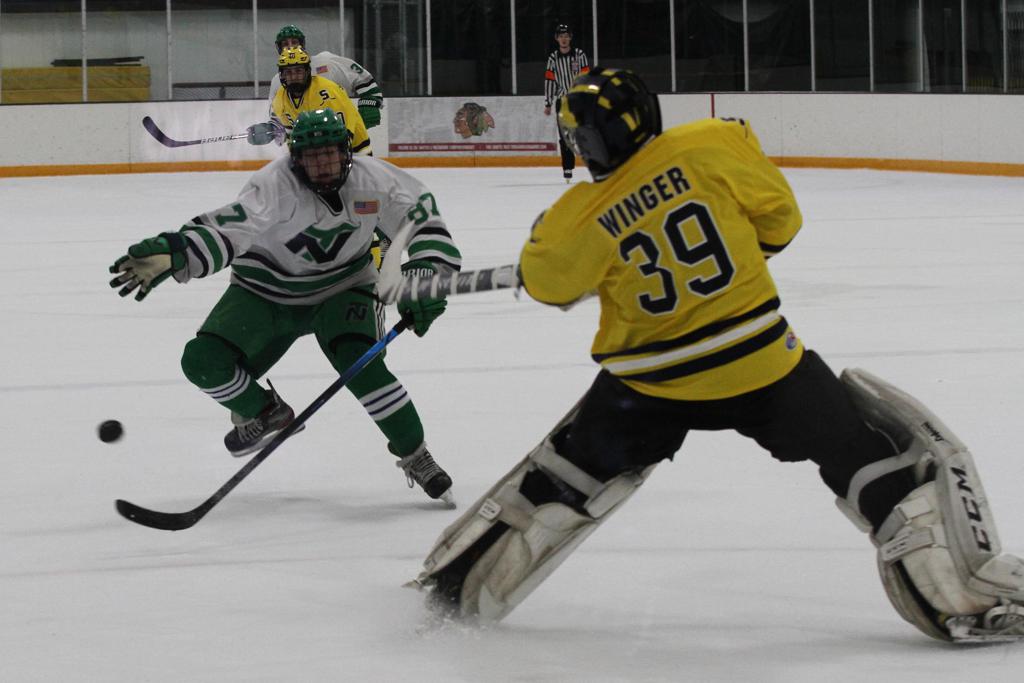 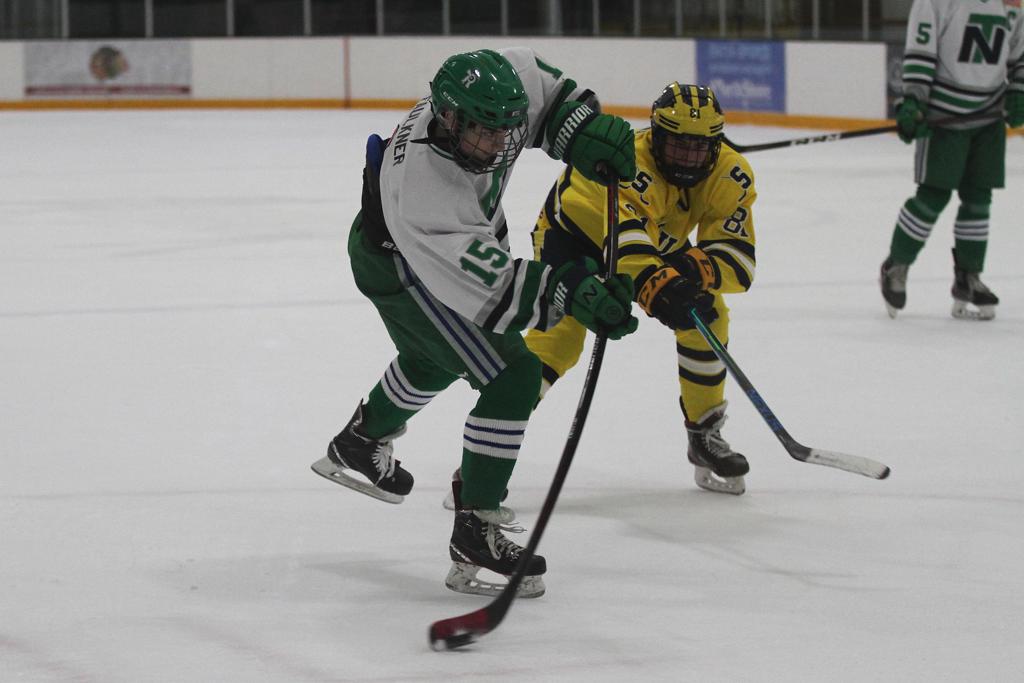 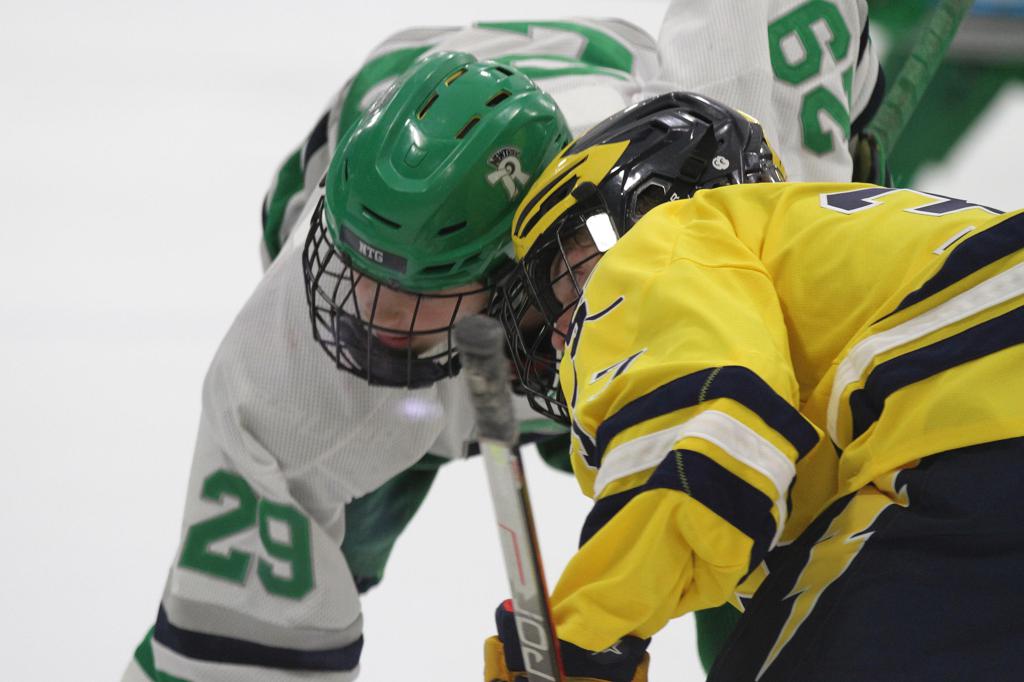 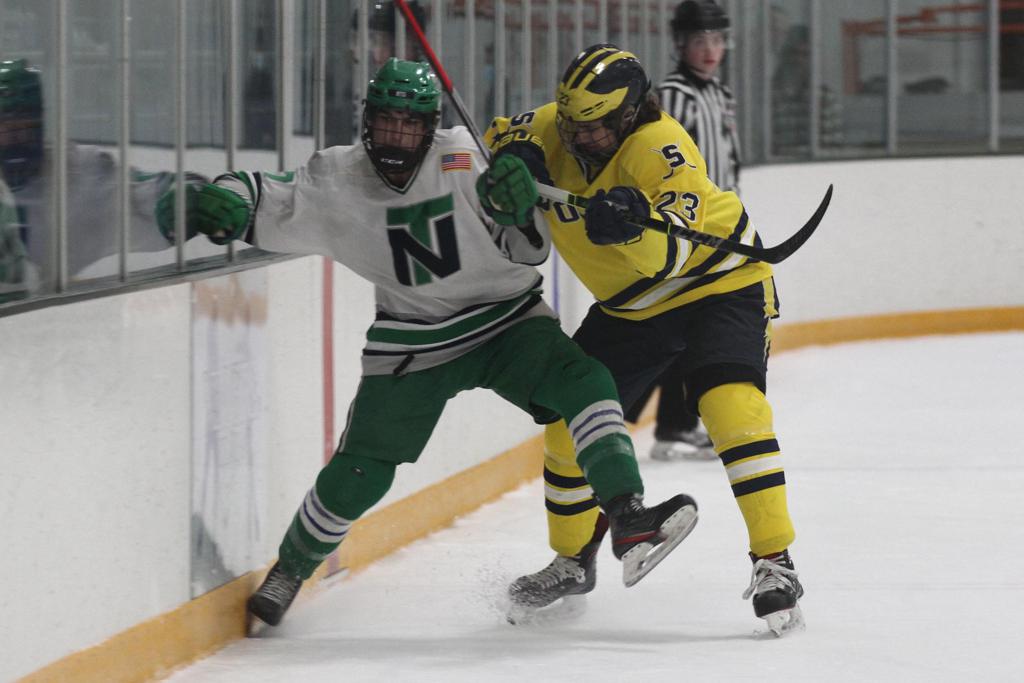 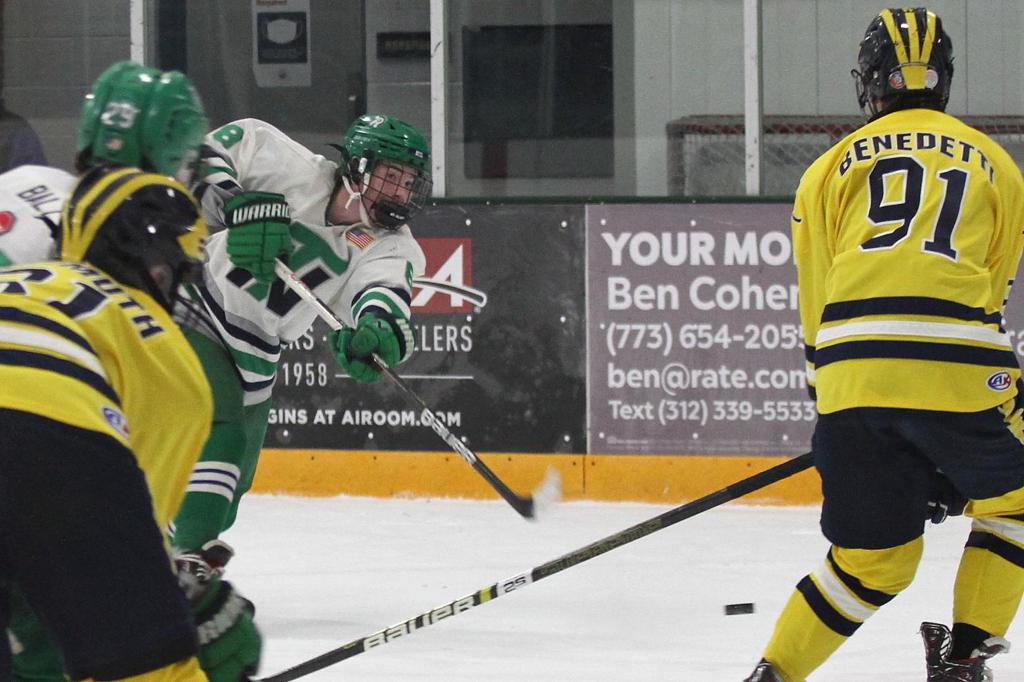 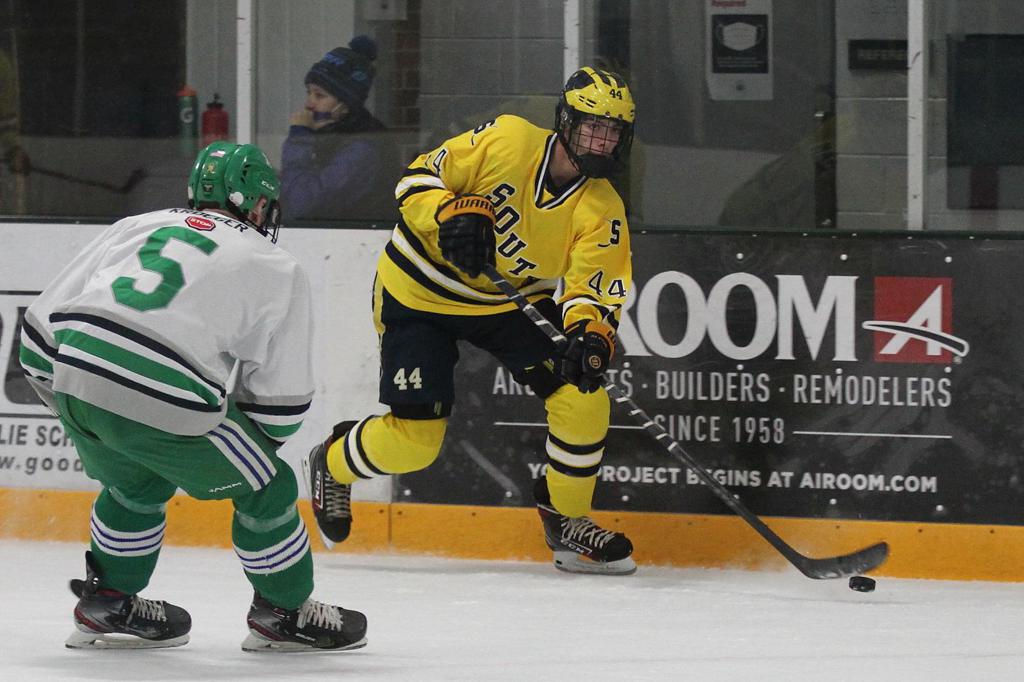