ADDISON -- New Trier captain Will Kroeger had a simple intermission question for his teammates in the locker room, as the Trevians pondered a 2-2 tie with York after two periods on Friday.

The Trevians answered that question and their 50-minute ride home from Addison was a good one. New Trier used a 10-2 edge in third-period shots to put two goals on the board, en route to a 4-2 Scholastic Hockey League win.

One day after traveling to Stevenson and winning 5-4 in overtime, coach Bob Melton’s team found the reserve it needed to secure Friday’s win.

“I just told them to look at it like a tournament, where you play one or two games, and this is what makes you a better hockey team,” Melton said. “To get a win at Stevenson and then a win at York? That’s a great week for us.”

Ultimately, the game-winning goal came off the stick of New Trier’s Will Cusick, mid-way through the third period. Cusick took a puck around the back of York’s net and skated back out along the boards before turning to face the goal.

His low shot passed through a crowd and somehow eluded every stick, skate, and body before the puck snuck over the line to the back of the net.

“I’m just going to be honest — I saw nothing,” Cusick said. “I saw no play. I just shoved it towards the net and hoped for the best.

“We came off a big win against Stevenson and I just thought we were the better-prepared team tonight. We were moving the puck well and it’s all about chemistry. We’ve been getting together off-ice, doing a lot of extra stuff, and it’s just made us a better team.”

Shoving pucks to the net was one area of clear advantage for New Trier (4-0-0 in SHL play), which finished with a 29-14 edge in total shots.

For York (5-2-0), that discrepancy in shots might have boiled down to one factor.

“Tonight I thought we came out a little slow, a little lackadaisical,” York captain Gregory Lee said. “We were getting some chances we couldn’t finish. But for the duration of the game, I don’t think the energy was there for our team the way it usually is.”

In the first period, only 34 seconds passed between the game’s opening goal from New Trier’s Jaden Sauer and its second goal from York’s Frank Nicosia. Sauer swooped in up the left side and scored unassisted at 14:12, and Nicosia answered with a power-play goal, on assists from Gregory Lee and Robert Plummer at the 13:38 mark.

“Our power play capitalized (twice) so that was great,” York coach Matt Boeing said. “I think our chances are there and we’re still finding our way to capitalizing on those chances.”

York’s Robert Plummer went in alone on net at 3:15 but Durdov came up with another big stop to maintain the Trevians’ 2-1 lead.

New Trier had an early power-play in the third period that saw Kroeger, Chessen, and Blake Faulkner put shots on net, and New Trier’s Tyler Smith sent a shot off the bar soon thereafter.

Both Durdov and York goalie Adam Kaczmarek stopped point-blank shots, before Lee rushed up the left side, got deep, and scored to tie the game at the 7:07 mark of the second period.

Kroeger and Faulkner found shots and Kaczmarek stopped shots from Cusick, Landon Douthit, and Henry Fleetwood down the stretch. Durdov stopped a shot from York’s Jonathan Wood near the end of the second period.

Quality goaltending keys everything, and both teams have multiple quality goalies this season.

“Adam Kaczmarek was great, without a doubt,” Lee said. “He’s an amazing goalie. Tonight we didn’t really help him out and he had probably three breakaways that he stopped. He had an all-around solid game tonight.”

Melton also credited Durdov for his fine day in net. And after two periods, the New Trier coach was clear about what his boys needed in the final 17 minutes.

“We missed two breakaways and we talked about not capitalizing on our chances,” Melton said. “I thought the score could have been something like 4-1 if we had buried those chances, but we didn’t. So I told them that if we didn’t put some pucks in the net, this game wasn’t going to go our way. And I was very happy with the way we played in the third.”

Douthit and Faulkner showed well in helping to keep the attacking pressure on to start the third period, before Owen Walker fed Cusick on his go-ahead goal at the 8:01 mark.

Durdov turned away a good rip taken by Lee and Kamienski sent a hard shot just wide for York at 6:30. York went on the power play twice after Cusick’s goal gave New Trier its one-goal lead.

A York player re-directed a Plummer shot just wide, and Kaczmarek stopped Douthit down the stretch.

York pulled Kaczmarek and then went on a power play for the game’s final minute, but New Trier held up under a two-man disadvantage.

The puck had eyes again in the game’s final 30 seconds when Kroeger cleared it from deep on his own end on the penalty kill. Kroeger’s clear traveled the length of the ice and hit just about dead center of York’s empty net.

Melton liked what his captain gave him on Friday.

Boeing’s squad is one of the best in Illinois, and opened the year ranked No. 6 in Ross Forman’s state rankings. New Trier held the top spot in Forman’s opening rankings, followed by Glenbrook North, and SHL teams held the first six spots on the list.

Now the Dukes just need a little shoring up.

“But our boys stayed positive and true to our mission today, and we were really pushing each other. We’re having a good year so far but it’s about staying happy but never being satisfied, right? We’ve had a lot of great leadership in the locker room and we’re falling forward after this game. We expect bigger things.”

Game notes:
NEW TRIER:
Melton was pleased with several performances from Trevians far and wide on Friday.
“(Kitchel) Snow,” Melton said. “This was only like his second game back and I thought he really gave us a lift. He’s small but he’s energetic. This isn’t your typical Green team. We have to work and grind, and I thought it was a real team effort tonight.
“Fleetwood and Sauer are our fourth-line guys and they got us our first goal today. If we also get contributions like that from them, that helps.”
Kroeger spread the credit around for Friday’s win.
“Everyone played amazing and our goalie, Drew Durdov, had a hell of a game,” Kroeger said. “I thought Tyler Smith played great, Cusick worked his butt off every shift, (Owen) Walker was working hard and so was (Daniel) Balz. But honestly, everyone played well.
“Everyone was working, moving their feet, high energy — we were playing physical and we were getting pucks to the net.”

YORK:
Lee knows which area of play he’d like to see his teammates work on moving forward.
“What we really need to do is start blocking shots,” Lee said. “We got out-blocked by almost twenty shots tonight. You have to have the energy, the urge, to get there and block that shot. It’s a matter of laying your body out there for your team.
“I think another lesson is that we have to come out harder and show teams who we are. Make a statement. Some nights the energy isn’t there but we need it to always be there if we want to go far.”
Like Durdov and Dean Lawrence for New Trier, York has its own pair of quality goalies in the fold.
“Adam Kaczmarek and Ben Foley are an outstanding goalie tandem and they’re really holding down the fort back there,” Boeing said. “Tonight I thought Matty Moore on defense, blocking shots any chance he could get, was great to see. He’s really finding his way this year and growing into a great role for us.
“Lee is just coming back after a couple games off and he put one away today, which was great. He drove the net and buried it top shelf. He’s huge to have back in the lineup.” 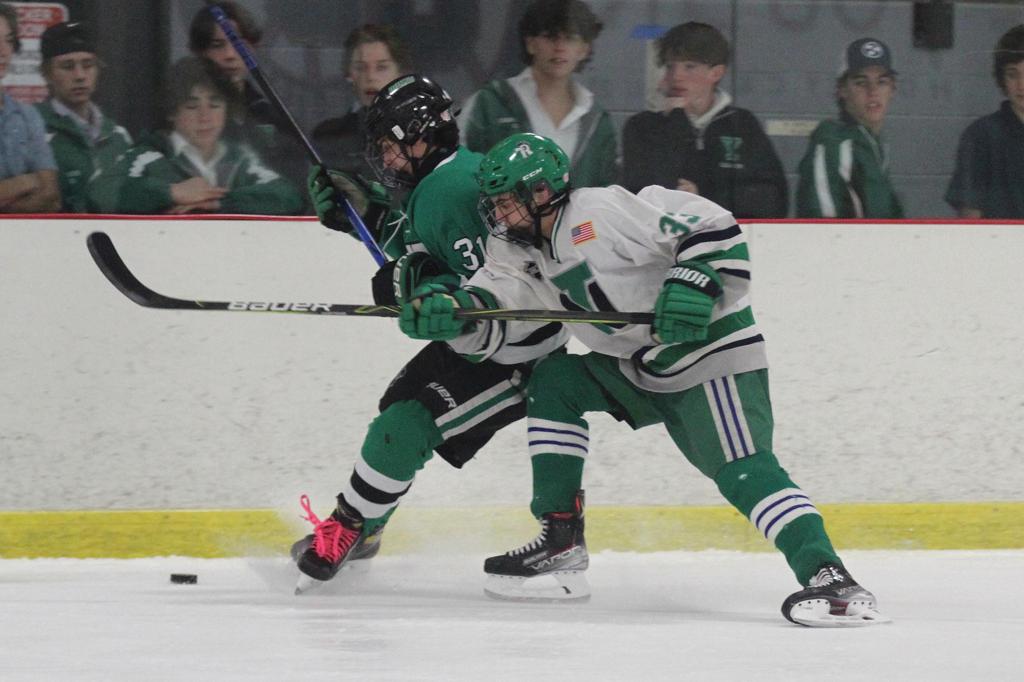 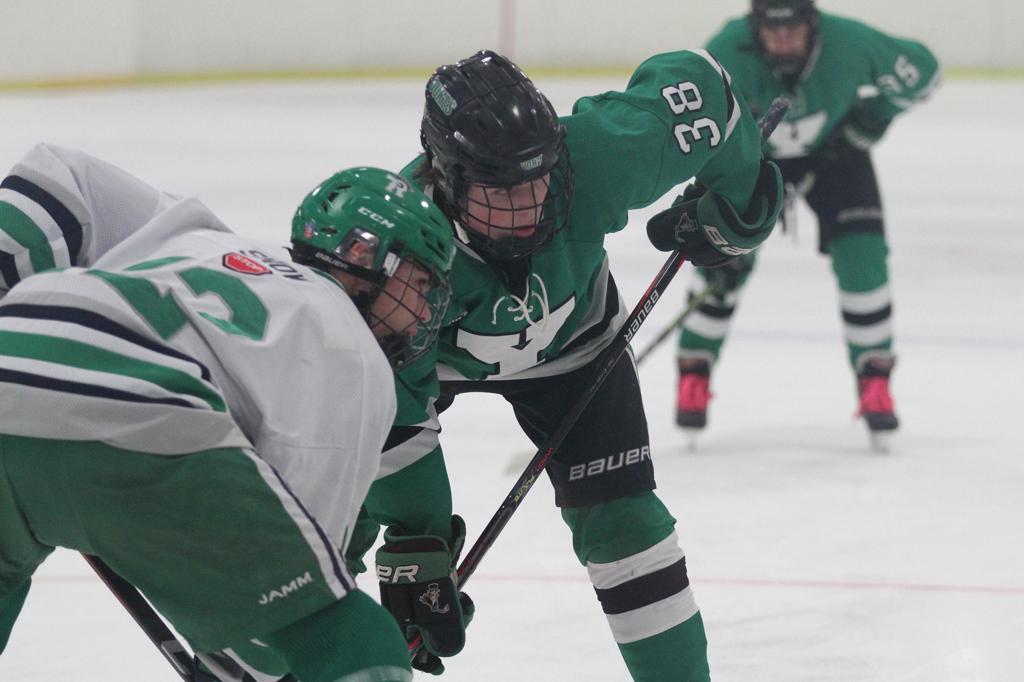 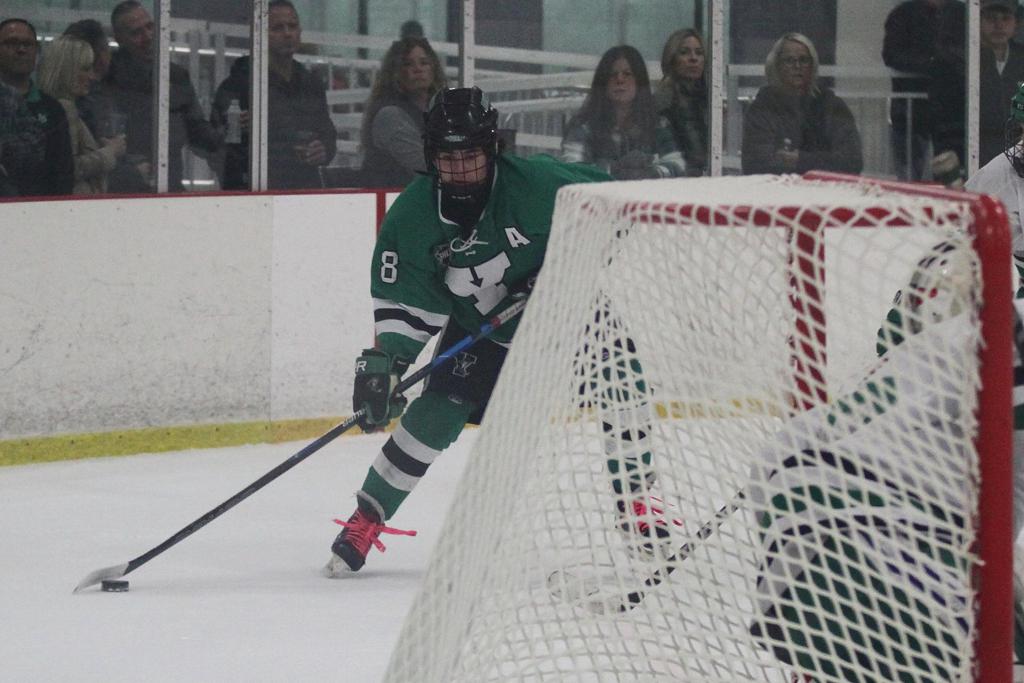 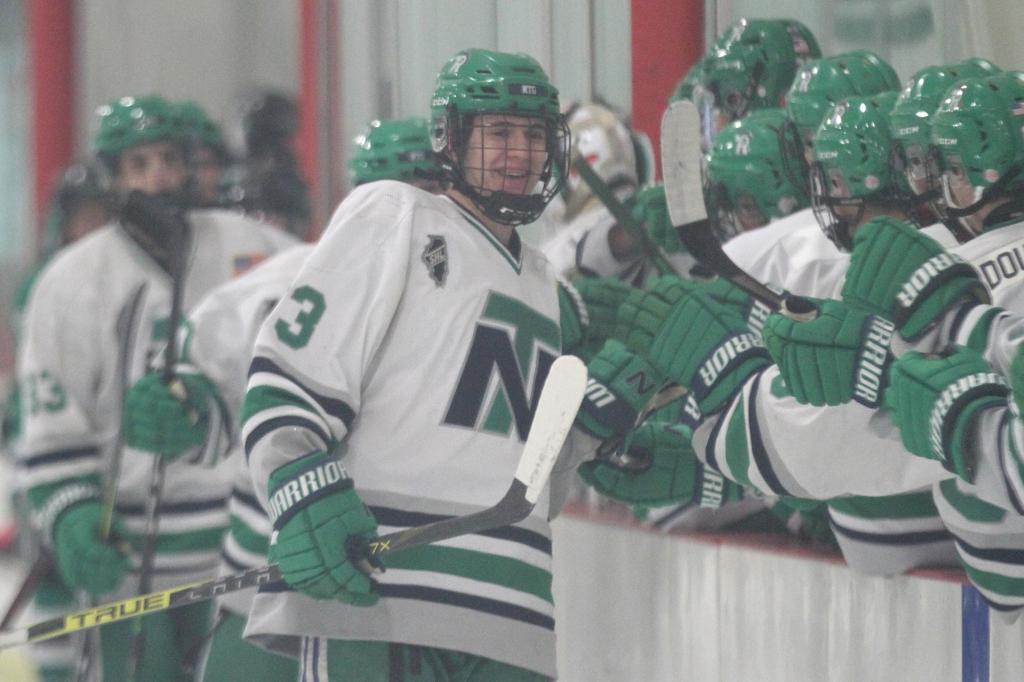