If there was a hero in Loyola’s 1-0 win over visiting Glenbrook South on Saturday, common opinion would say it was Loyola Gold’s Garret Grady, whose late third-period goal gave the Ramblers the win.

“You have to give credit to (Jack) Gustafson,” Grady said. “He took a puck in the zone, cut to the middle and undressed a kid, and shot it. It bounced off and I was just at the right spot at the right time.”

Grady cleaned up on the play from point-blank range to give his side the game’s lone goal.

“It was a great north-south game and a great morale win and a boost for the kids,” Loyola coach DJ Lavarre said.

Loyola’s home barn in Lincolnwood saw yet another Scholastic Hockey League game played in front of a raucous home and away student fan contingency.

That crowd saw Loyola throw a high-flying attack at Glenbrook South in the first period before play evened out through the next two periods.

In a game that only had two penalties called all night, it was the second one that carried all the weight. With 2:01 remaining in the game, South got tagged with a delay of game penalty when its net was knocked off its stanchions.

Twenty-seven seconds into Loyola’s only power play of the night, Ryan Cowen found Gustafson, Gustafson found a shot, and Grady found the rebound on the doorstep.

“It was a good game. At times we set the tempo in the play, and their goalie obviously played extremely well,” Lavarre said. “But our goalie had to play well, too.”

Loyola goalie Cirian O’Brien’s shutout was earned, to be sure, particularly under solid third-period pressure from Glenbrook South.

South goalie Luke Winger made his bones in the first period, and did so under some odd circumstances, having missed the puck drop because his skates were missing. When Winger emerged from the locker room and showed up to South’s bench mere minutes into play, he was immediately sent into the game.

No warmup, no stretching, no problem.

Winger was in the zone from the moment he settled in between the pipes, forced there by Loyola’s high-flying first-period attack.

“I would have liked to warm up but sometimes you just get thrown into things,” Winger said. “The best players step up to the occasion and that’s what I tried to do. The key was that first shot. It was nice to be able to stop it.”

Loyola’s Will Schreiber sent that first shot in on Winger, and the Ramblers (2-1-0 in SHL play) spent most of the rest of the first period pressing the Titans (1-3-0).

Schreiber, Gustafson, Bobby Sharfstein, and Keaton Lillybridge all tested Wingermultiple times through 17 minutes but he met every shot.

“Winger played great. He kept us in it that first period,” Glenbrook South coach Jim Philbin said. “He helped out our (defense) and the more (Loyola) flooded our defense, the more that started to slowly open up our offense.”

Loyola has one of the most dynamic offenses in Illinois and it was all on display in the first period.

“We came out hard. Our student section was loud and that always gets us hyped up,” Grady said. “We were really focused and prepared for the game and that really got us going.”

Glenbrook South weathered the first-period storm, made some adjustments, and began finding offense of its own in the second period.

Bradley Southwood, Jason Ban, Owen Almburg, Adrian Sokol, and Will Papalas all took swipes at the puck in the second period, but O’Brien and his defense were up to the task.

Winger saved Schreiber on a quality scoring chance, and made a glove save on a Grady shot soon thereafter. O’Brien made two quality saves on Southwood as the second period ended.

“I think the kids did really well. They had a great game, our defense played well, and offensively we needed to get more chances, which we did in the third period.”

O’Brien stopped two shots in a crowded goalmouth early in the third period and gloved a Mason Dolby shot with five minutes gone in the period. Winger turned away a re-directed Cowen shot and stopped a Grady shot mid-way through the period.

Back-and-forth play continued. O’Brien gloved a Ban slap shot and then stopped a Carter Erickson offering a minute later. Loyola had a 2-on-1 near the six-minute mark but Winger saved Cole Joubert’s shot from the left side.

When South’s net was knocked off its stanchions, a long conversation among the game’s officials ensued before Loyola was awarded a power play instead of a potential penalty shot.

The Ramblers capitalized quickly and withstood a 6-on-5 South advantage down the stretch to secure the win.

“Their goalie played really well tonight,” Grady said. “Our forecheck was super strong today, and we were moving the puck well and finding open spots on the ice. We had some injuries today but we just had to put that aside and work through it. They were a lot bigger than us and they were physical, but we just kept going.”

Loyola entered Saturday’s game missing a few key contributors due to injury, and then lost two more players to injury during the game.

“That shortened our bench, so I thought we played really well under those circumstances,” Lavarre said. “We ended up with just nine forwards so you could tell in the third (period) they were a little tired. The team responded and kids that don’t always play too much were playing a lot, and they showed that they can play at this level.”

Titans bounce back
After struggling to match New Trier’s energy in a loss on Wednesday, Glenbrook South brought the effort to the ice against Loyola.
“We had a long meeting after that game and had a nice practice Thursday afternoon,” Philbin said. “They know what they have to do. They knew they had to come out strong tonight against a top team in state. We wanted to beat them and the effort was there.” 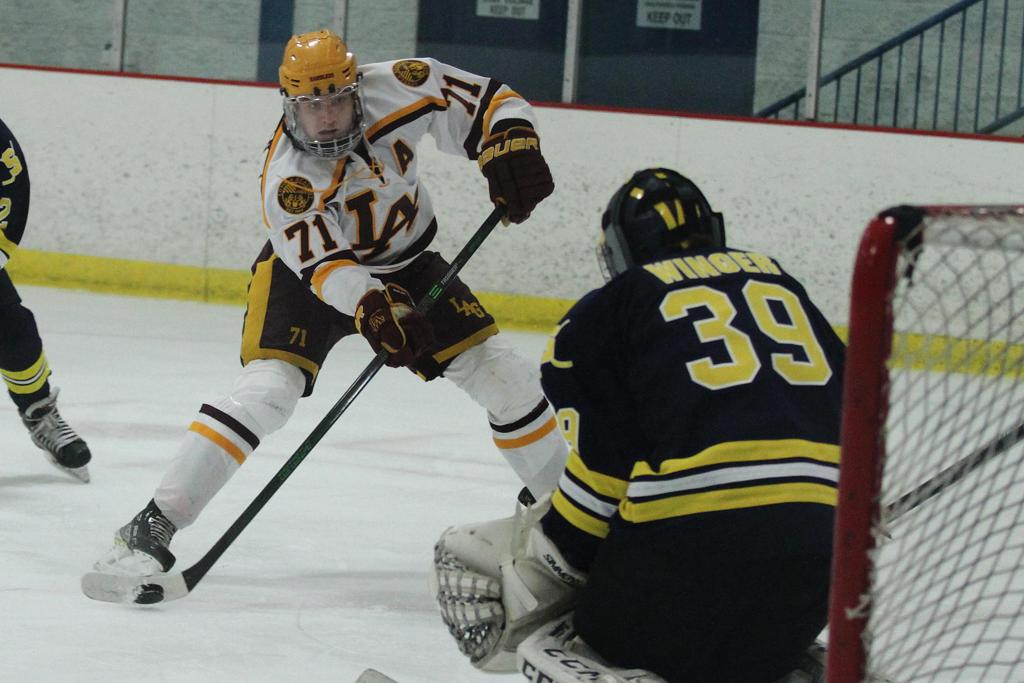