BENSENVILLE -- Saint Viator started fast, Stevenson started even faster, and both teams hung on against comeback efforts to win their state semifinal games, in an all-SHL final four on Wednesday at this year’s AHAI Red Division state finals.

The Lions and Patriots are crashing the state title game after upsetting higher-seeded New Trier and Loyola Gold, respectively, and both semifinal games gave fans fever-pitch levels of excitement and anxiety at The Edge in Bensenville.

Heck, during the third period of Saint Viator’s 4-3 overtime win over New Trier, Saint Viator goaltender Mike Massaro could barely hear himself think over the roar of student fans stacked up in the bleachers to the rafters behind him.

“It was like a mini-United Center,” Massaro said. “The atmosphere was unbelievable. I can’t even explain this feeling. It’s amazing. That’s all I can say — it’s amazing. But it’s a job that’s not finished.”

Saint Viator delivered a gut-punch to New Trier in Wednesday’s first seven minutes, grabbing a 3-0 lead on goals from Dylan Harer, Tommy O’Neill, and Sean Nutley. Harer deflected a shot from the point at the 12:24 mark on assists from Jake Knieling and Angelo Massaro to kick things off.

O’Neill skated up on a 2-on-1 and buried a shot from the left side at 10:36, with Harer getting the assist.

Nutley sent in a long wrist shot at 10:00 on an unassisted goal and Saint Viator was sitting pretty. The Lions posted a 7-5 edge in shots in building a 3-0 lead through one period of play.

“We came out fast and we knew we wanted to get that first goal because it’s tough to play from behind against New Trier,” Saint Viator coach Tim Benz said. “So we were coming out guns blazing. We wanted to attack their ‘D’ and attack their goaltender. And we stayed out of the box.”

New Trier answered the bell in the second period. The Trevians outshot Saint Viator 18-6 in the period to tie the game, getting goals from Butler Chessen, Tyler Smith, and Danny Balz.

Chessen swept in on the right side, faked a centering pass, and scored at the 13:36 mark of the second period, with Will Cusick on the assist. Smith scored unassisted roughly two minutes later, cutting across the slot from right to left before burying a wrist shot that pulled the Trevians to within one goal of the Lions.

With 3:36 remaining in the second period, New Trier pulled even when Balz posted up in the slot, received a pass, then spun and buried a backhand to make it 3-3.

The buzzer to end the second period couldn’t come fast enough for the Lions.

“The intermission gave us time to focus up and get back into it,” Saint Viator’s Patrick Neary said. “We came out strong in the third period.”

Shots finished dead even at 12 apiece in the final period, but no goals were forthcoming and the game went into a mandatory 10-minute overtime.

Neary and O’Neill didn’t let it get that far. Less than three minutes into OT, O’Neill took a puck around the back of the net and found Neary in front. Neary one-timed it, the puck stretched the back netting to end the game, and the Lions went wild.

“I got off the bench and (O’Neill) said ‘just go hard to the net, Neary’. No one was in front of the net and he passed it right to my stick,” Neary said. “I just saw the far side open and I just buried it there.”

Neary also scored the game-winner in an overtime against Oak Park and River Forest in their first state tournament game. His second game-winner of the tournament was even sweeter.

“This feels amazing, especially for this senior group,” Neary said. “It’s the most consecutive final fours we’ve ever been in and it feels great.”

Benz applauded Neary’s second heroic feat of the tournament, along with the exceptional play of Massaro, who finished with 38 saves against top-seeded New Trier.

“The second period was a little iffy for me, but then in the third period and overtime, I got it done,” Massaro said. “New Trier’s a very good, skilled team but I think we were out-working them. We played good ‘D’ and we outworked them.”

Saint Viator placed second in the Red Division state finals three times — in 1979, 1989, and 2012. The Lions went 2-1 against Stevenson in their three regular-season SHL meetings.

Stevenson beat Saint Viator 3-2 back on Sept. 18, with Will Harlow, Dylan Jette, and Ethan O’Grady scoring for Stevenson, and Sean Nutley scoring twice for Saint Viator.  The Lions tied the season series at one game apiece on Oct. 9 with a 3-0 win that featured a hat-trick from Reiden Mueller; Saint Viator won the final regular-season meeting 4-0 over Stevenson on Nov. 24, getting two goals from Mueller and one apiece from Will Minarik and Angelo Massaro.

“We’re the only team in the league to have no all-conference players besides Barrington, and they didn’t make the playoffs,” Benz said. “But we preach all the time that we’re as good as anyone out there. We don’t have any superstars but all 21 guys contribute day-in and day-out. So why not us?”

When Stevenson and Loyola lined up to start the night’s second state semifinal game, no one in the building in Bensenville would have predicted a game that gave fans 12 goals to cheer about.

And there’s no way anyone foresaw Stevenson lighting up the scoreboard like a pinball machine in building a 6-1 lead in 22 minutes of play.

“I would have never in a million years thought we’d get seven on them,” Stevenson coach Tom Wood said. “I told them before the game that we’d have to win by giving up two or less, and that we were not going to win in a shootout. Well, I was wrong.”

As surprising as Saint Viator’s start was against New Trier, Stevenson’s opening period against Loyola was even more so. The Patriots scored four goals in the first period and two more before five minutes had ticked off the clock to start the second period in grabbing its 6-1 lead.

Andrew Lermer got the ball rolling less than three minutes into the game, burying a rebound after an initial wraparound shot from teammate Brody Stokes. Dylan Jette made it 2-0 at the 11:31 mark of the first period when he deflected a Nolan Jones shot into net.

Loyola’s Garet Grady answered with a rip from the right side that made it 2-1 at 9:31 but Stevenson took a 3-1 lead when Spencer Harman collected a puck sent off the boards by a Loyola player and buried it at the post at 2:31.

Stevenson made it 4-1 when James Mendelson took a puck up the left side into Loyola territory and dropped a perfect centering feed to Schneider in front of the net at the 2:15 mark.

The unlikely trend continued into the first seven minutes of the second period. Stevenson made it 5-1 when Schneider made an angled cut through the slot with the puck and with his back to the net, backhanded a no-look feed that sprang Ethan O’Gradney, who one-timed it into the net.

When Schneider scored on a feed from Brandon Schultz with 12:19 remaining in the second period, Stevenson matched the six goals they put on Loyola in an early-season win over the Ramblers.

“It’s easy to do when you have a team as good as we do,” he said. “Now we could be down 10-0 and we’d still be positive on the bench, still be picking guys up, which was something we had a weakness at earlier in the year. But we immediately fixed that and from then on, we just started climbing up the ranks and winning games.”

With so much time left, Loyola had ample room to mount a comeback and the Ramblers did not disappoint. First came a goal at 7:54 from the Ramblers’ Charlie Baine on a 3-on-1. Stevenson goalie Jonathan Adler made a highlight-reel glove save on Loyola’s Jake Orzechowski late in the period, but Orzechowski converted his next chance, pouncing on a Stevenson turnover to make it 6-3 with 1:10 left in the second period.

34 seconds into the third period, Loyola’s Jack Gustafson made it 6-4 after teammate Ryan Cowen took a puck to the net and laid it off to the right side, where Gustafson buried it.

Loyola pulled its goalie with roughly 2:30 remaining in the game and it paid off quickly. Gustafson carried a puck up the right side and centered a pass to Keaton Lillybridge, who in turn dropped it off for Orzechowski, who buried his second goal of the day and brought Loyola to within one goal of tying the game with 2:11 left to play.

The resilience that constructed four comeback goals from Loyola was not lost on Wood.

It was at that point in the game when Davis Jegers — Stevenson’s leading goal-scorer this season — dropped the curtain on Loyola’s comeback. Jegers, picked up a puck at the blue line, chipped it by a defenseman, and scored the game’s final goal at the 1:19 mark.

“We just kept working,” Schneider said. “No one stopped moving their feet and (Adler) stood on his head, which he has done for us the whole year.”

Schneider was happy to welcome his big offensive day.

“That’s been my issue the whole year — I couldn’t score and I didn’t shoot the puck enough,” Schneider said. “So for me to get on the scoresheet tonight, in a big game like this, getting that many points was huge. My team needed me to step up and I had to.”

Stevenson is also chasing its first state title, after placing second in 2018. Wood anticipates a dogfight when his team takes on its biggest local rival in Saint Viator with a state crown on the line.

“Tim (Benz) is a really good coach and he’ll have them ready to go. They’ve really given us a hard time this year,” Wood said. “They come out hard every game, they keep guys back, they stretch guys, and they’ve beaten us a lot this year with stretch passes so we’ll have to be ready for that. And we’ll have to come out ready to play like we did tonight.” 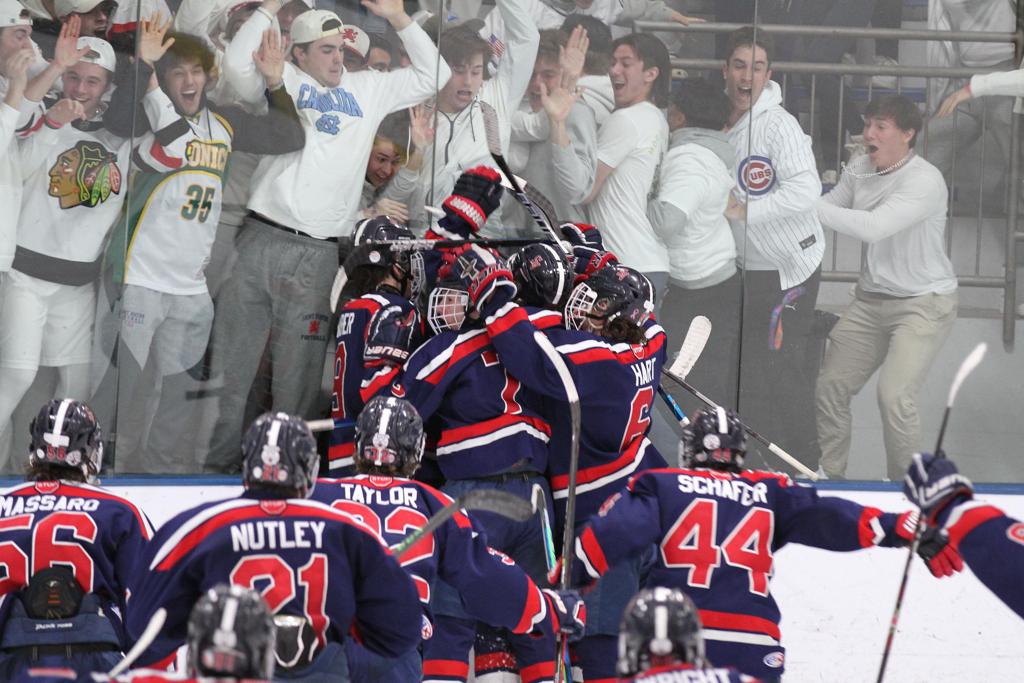 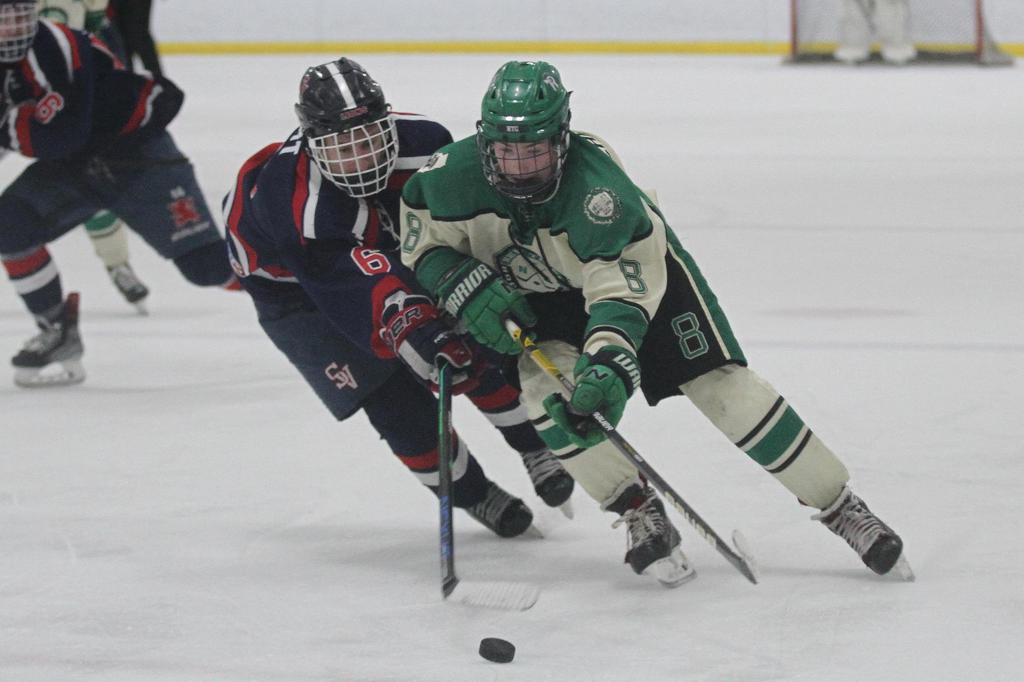 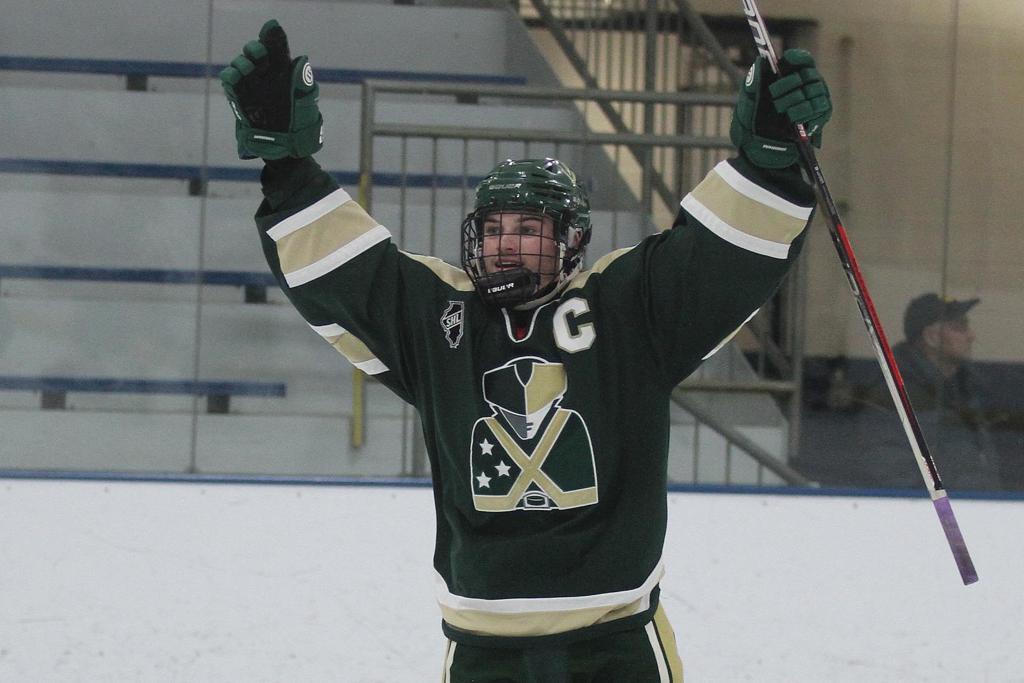 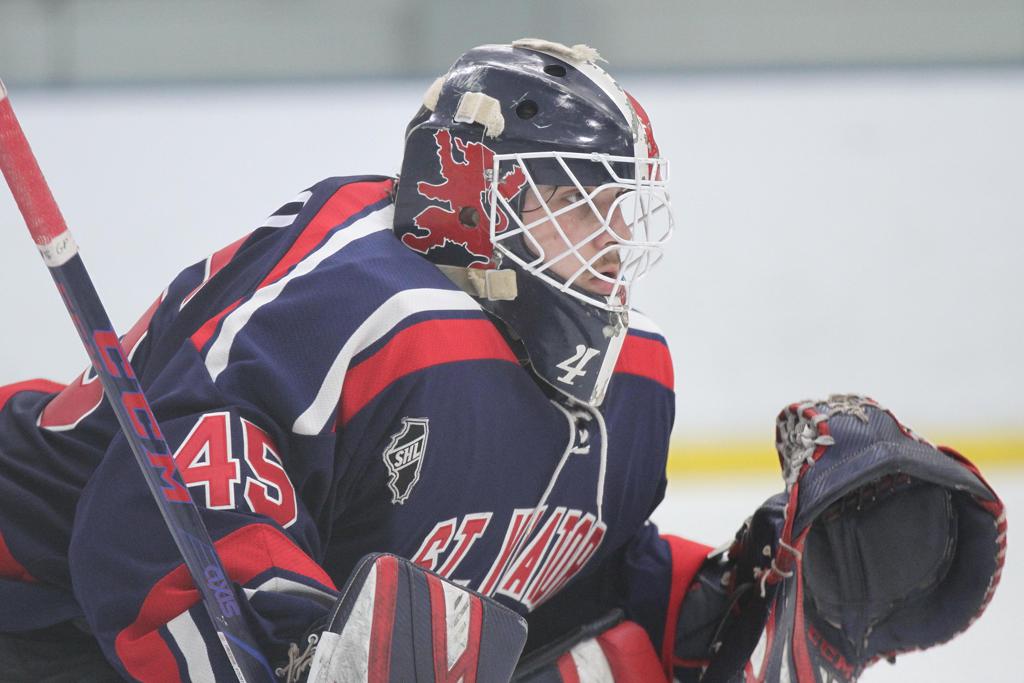 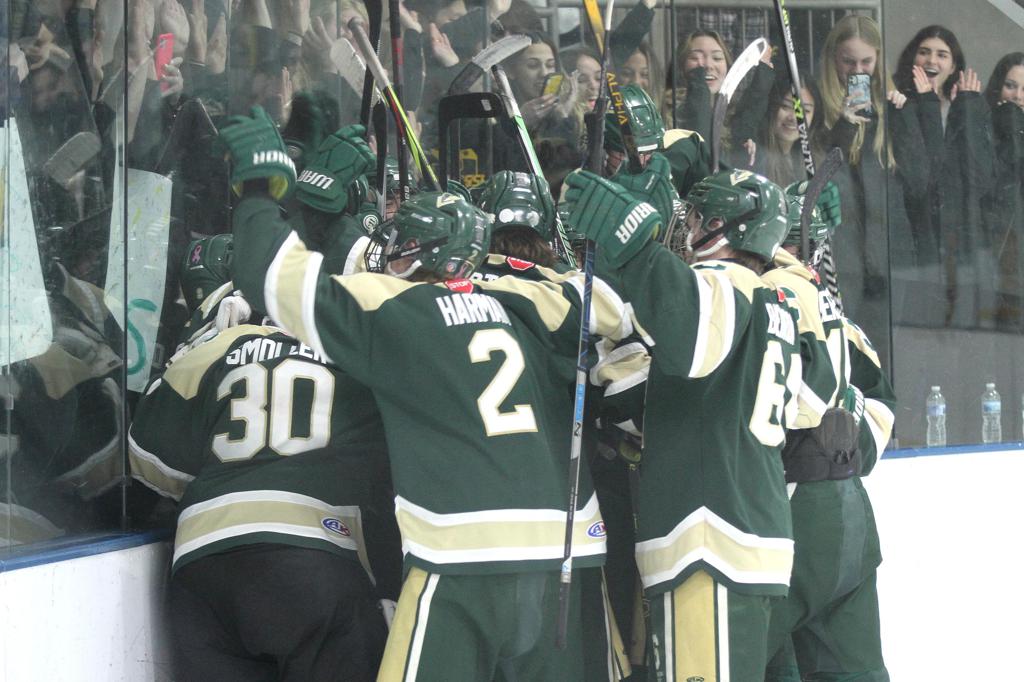