WILMETTE -- Comebacks aren’t any team’s preferred method of winning, but when you combine fortitude with the offensive talent that Loyola has, getting a lead on the Gold team is never a completely comfortable place to be.

One night after coming from behind to beat Glenbrook North, Loyola came back with a late goal to force overtime against Saint Viator on Sunday, and ultimately won 4-3 on a Ryan Cowen goal in overtime.

“It shows how mentally tough we are,” Loyola senior forward Jack Gustafson said. “We’ve trailed in games this season but we’re comfortable in that situation. We played well. And we had a couple of our guys out tonight but it was next man up.”

Saint Viator scored once in each period and led 3-2 on a Will Minarik goal mid-way through the third period. But Loyola’s Keaton Lillybridge tied the game on a power play goal with  only 2:28 remaining.

“Credit Viator because they’re a really good team,” Loyola coach Scott Ciraulo said. “They work really hard, they’re physical, and I think they’ll do really well with their style in the playoffs.

Saint Viator (14-13-0) struck first on a Tommy O’Neill goal that came on an odd-man rush, with Jack Kuffel getting the assist at 8:42 of the first period.

Little more than a minute passed before Loyola (21-6-0) tied the game. Bobby Sharfstein found Jack Gustafson, who took a puck around the back of the net before feeding Garret Grady at the goalmouth for a point-blank goal at the post.

Gustafson and Grady were at it again four minutes later. Gustafson sent a puck from the right side to the far post, and Grady sent it home to give Loyola a 2-1 lead with 3:16 remaining in the first period.

It was Gustafson’s SHL-leading 29th assist of the year, and Grady’s 11th league goal. O’Neill’s goal was his team-leading 15th in SHL play and Kuffel’s 5th assist for coach Tim Benz.

“I thought in the first, we didn’t start the way we wanted to,” Benz said. “I know we got up (1-0) on them but we played in our zone a little bit too much for my liking. Once we got that lead it would have been nice to maintain the lead for more than five minutes.”

Loyola continued to pressure after Grady’s second goal but Saint Viator goalie Dom Grimaldi shined in keeping the Ramblers out. Grimaldi made consecutive fine saves with 2 minutes remaining in the first period to keep his side within a goal of tying the game.

Gustafson found Nicholis Malaniuk for a prime scoring chance in the final seconds of the period but Grimaldi deflected it off the post just before the buzzer sounded.

“Dom looked pretty darn good,” Benz said. “He made the saves we were asking him to make and then some.”

It was Loyola goalie Bradin Haynie’s turn to shine in the second period. Haynie turned away quality shots from Saint Viator’s Angelo Massaro, O’Neill, and Minarik. The period went scoreless for nearly 16 minutes before Saint Viator’s Reiden Mueller (13 goals) scored at the 1:07 mark off the face-off, with an assist to Gavin Wright (10 assists).

Gustafson and Grady found scoring chances early in the third period but Grimaldi and the Lions held firm. Minarik scored his 9th goal of the year at the 8:45 mark, crashing net to bury the rebound on a shot taken by teammate Paul Carney. It was Carney’s first SHL assist of the year.

“I thought we played really well. We let up an early one, which we’ve done a couple times this year, and I like how we responded to going down in the third period,” Cowen said. “We knew exactly what we needed to do and we got one off the draw with about two minutes left.”

Mueller and Jake Knieling found overtime shots on their sticks for Saint Viator but Haynie met the challenge, before Cowen netted the game-winner.

“I saw Ryan Boersma go in on a two-on-two, they stopped the puck and it kind of squirted out to the middle of the ice,” Cowen said. “I saw my opportunity, saw the top right open, and decided to rip it there and it went in.”

New Trier will need to win its final three SHL games to tie Loyola with 43 points, but the Trevians would get the top seed for the SHL tournament after taking two of three games against the Ramblers.

“This win gives us a chance at first place in the league but we’ll need a little luck, so we’ll see. 2022 has been tough for us, with injuries, and every single game has been a battle with a lot of the top teams in the league.

Saint Viator is poised to finish fifth in the SHL and like every team, the Lions are battle-tested after a brutally-competitive SHL regular season.

Benz was also much happier with his boys’ play against Loyola, one night after the Lions weren’t at their best in a loss to New Trier.

Loyola
Gustafson is poised to finish his senior year as the top points-scorer in the SHL, after netting two assists in Sunday’s 4-3 overtime for Loyola over visiting Saint Viator.
Gustafson finished with 24 goals and 29 assists for 53 points through 27 games, just ahead of Oak Park and River Forest’s David Andolina, who has 34 goals and 15 assists for 47 points through 26 games played.The Ramblers gave Gustafson the game puck for finishing as the league’s points leader, unless OPRF’s Andolina can manage six points in the Huskies’ final game against Barrington on Thursday.
Whatever happens, Ciraulo has watched Gustafson’s journey from a sophomore who only saw spot action on Loyola’s Gold team, to the league’s leading scorer.
“What a lot of people didn’t see was Jack on that practice rink, two years ago when he was a sophomore, working on some of the plays he does now,” Ciraulo said. “He worked harder than anyone that year, he put the work in, and now he’s one of our top players. To see that kind of work payoff is what I’m most proud of. And he’s just a really good kid off the ice, too.”

Saint Viator
Saint Viator’s team this year has been built on effort, grit, and a team-wide effort to put pucks in the net, as Benz stressed to his squad in the locker room at Loyola.
“I went around the room and said ‘how many guys do we have in the top ten in scoring in the league?’ Zero. ‘How many in the top fifteen?’ Zero,” Benz said. “We have one guy in the top eighteen in scoring. And that speaks to what we are — that we can’t just depend on one guy, whoever it is, to score goals. We have to do it by committee, and it’s not going to be flashy. It’s going to be gritty.
“That’s who we are, so all four of our lines have got to be rolling, our defense has to contribute, our goaltenders have to contribute. It’s truly a team win when we win games.”
Benz got steady performances around the ice Sunday, including from an unsung player on the rise.
“Jake Knieling has been playing very good hockey lately. He’s been stepping up his role,” Benz said. “He’s been getting offensive at the right times, he jumped on the power play and has helped us create offense from a defenseman. He’s picking that role up now, which is nice to see.” 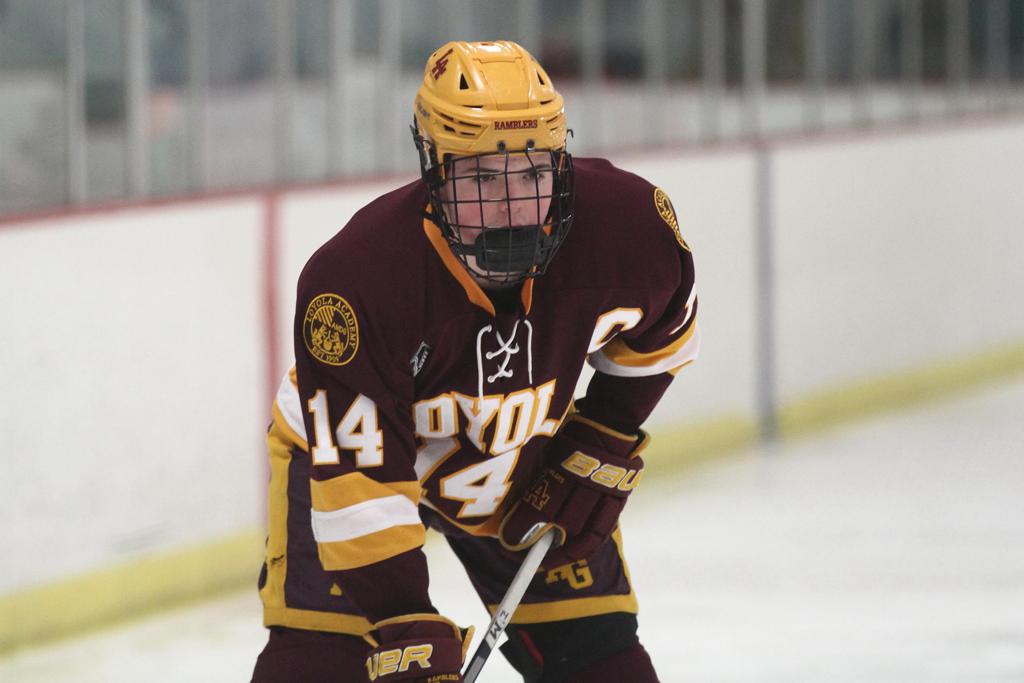 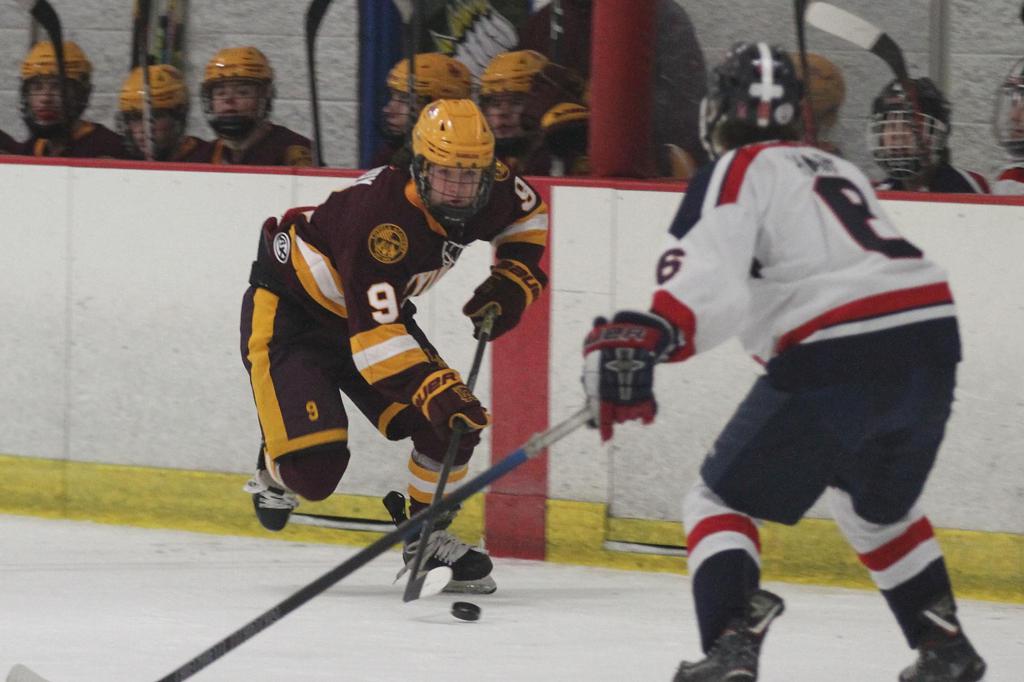 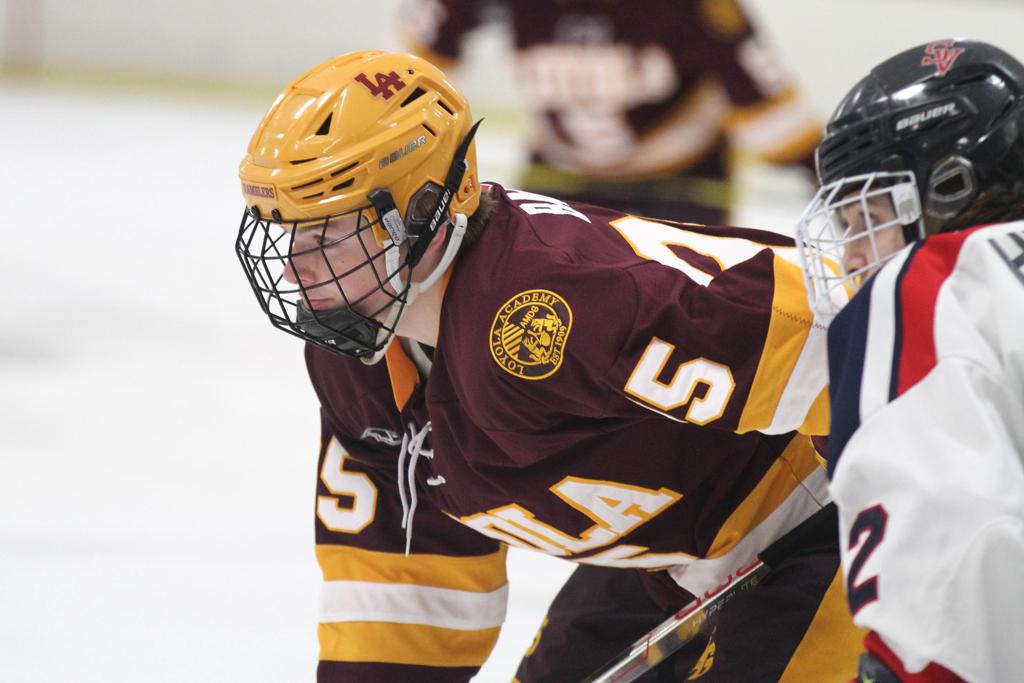 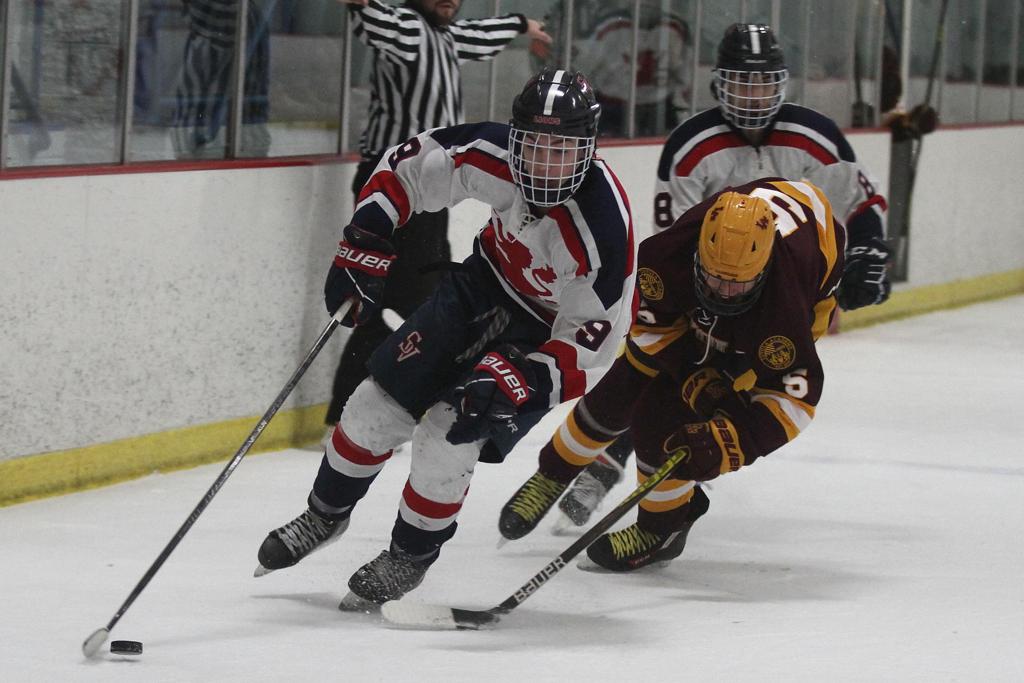 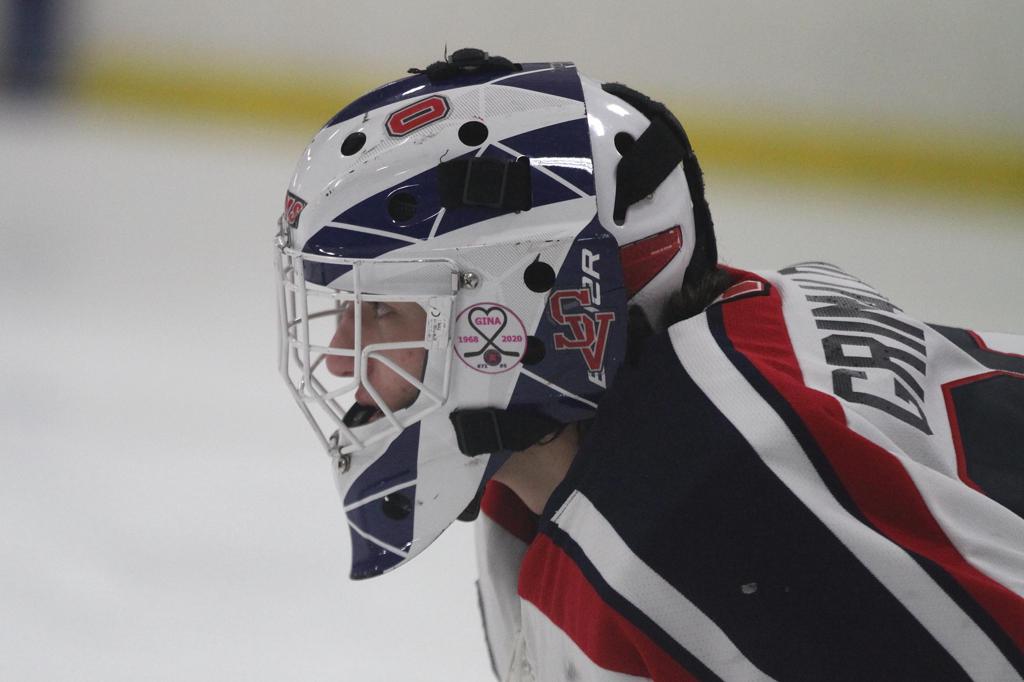 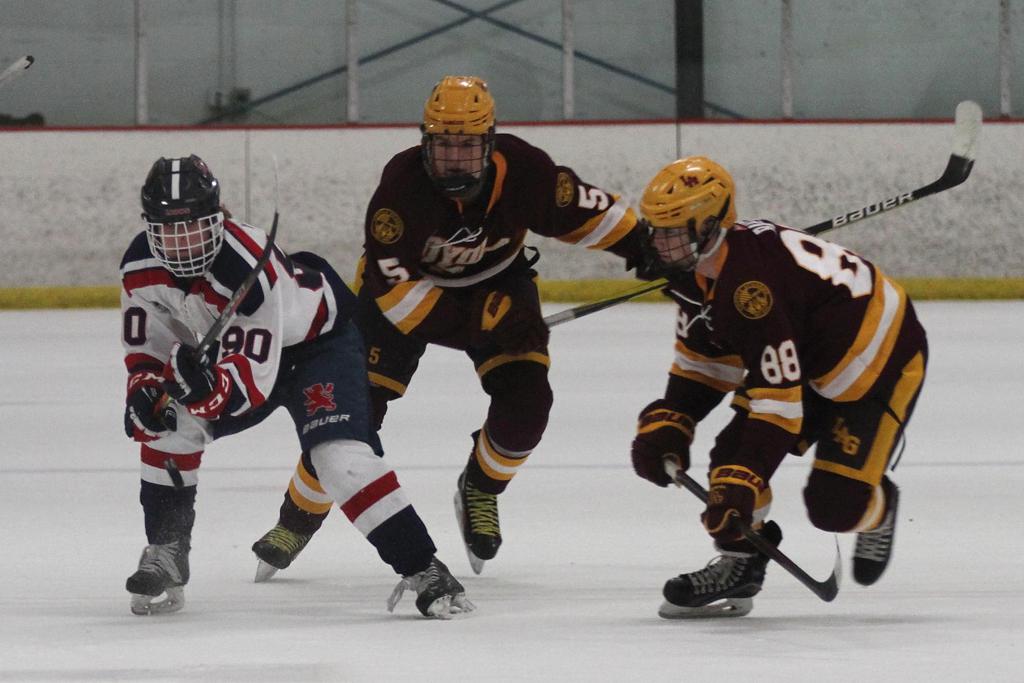 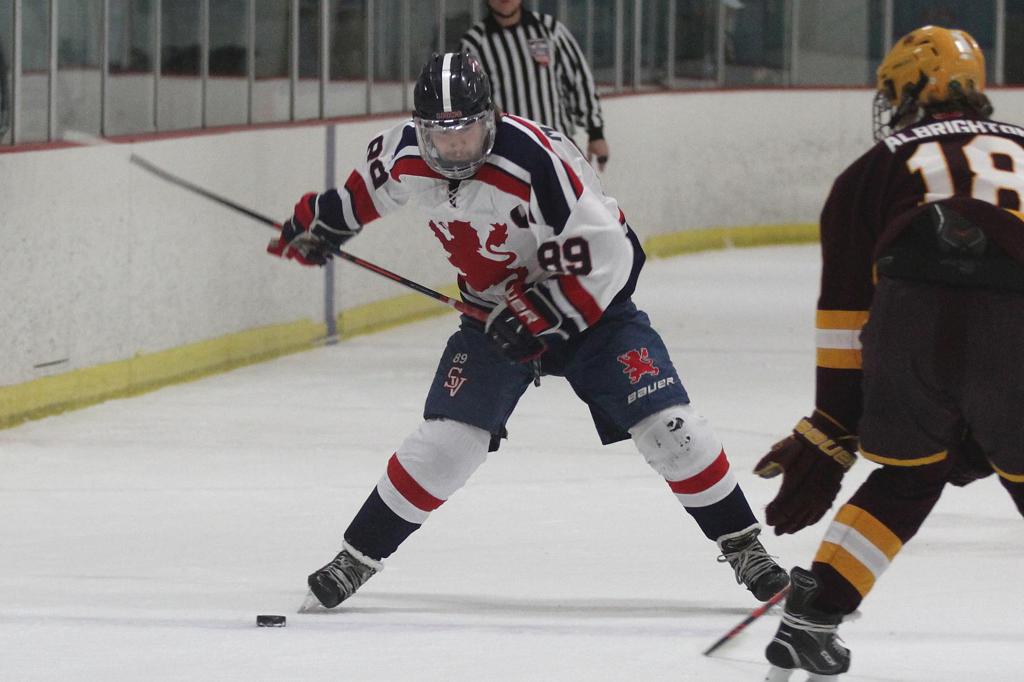 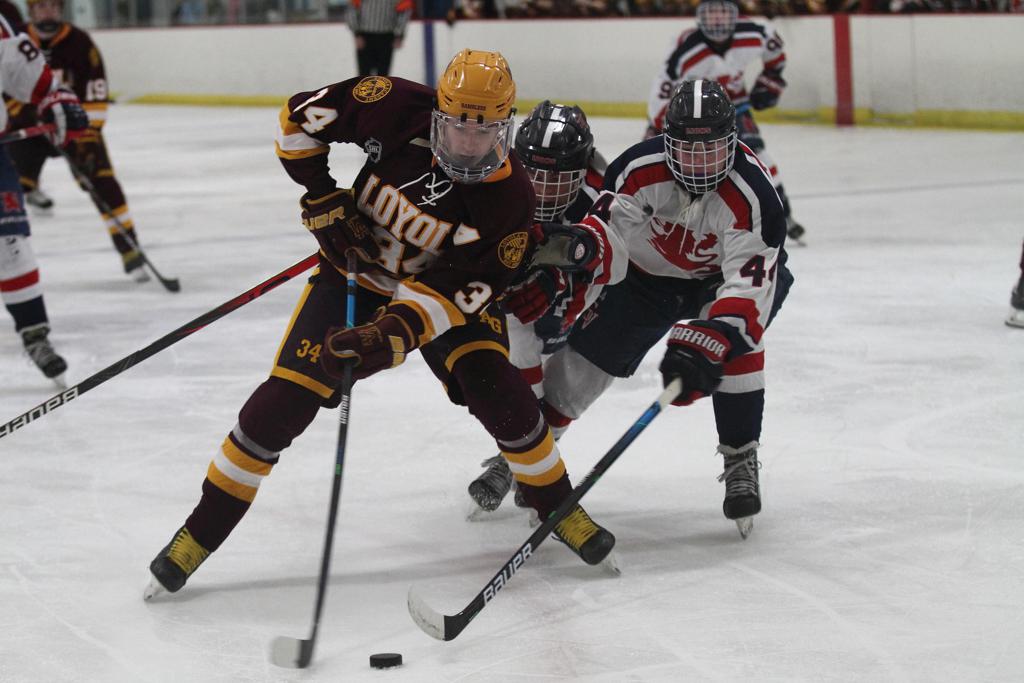 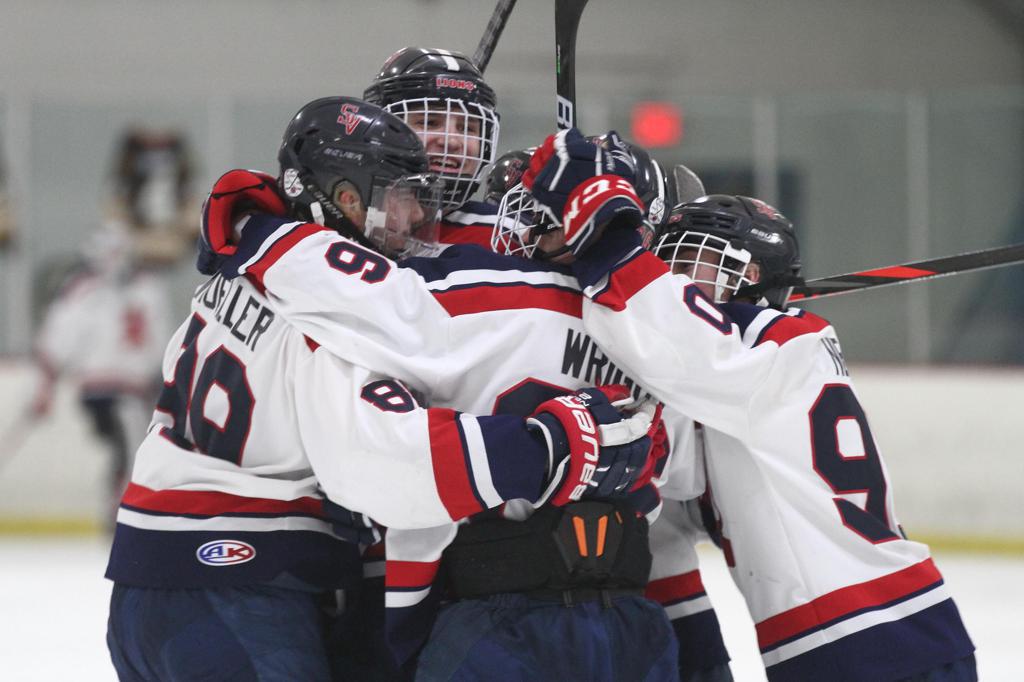