York stuns with a 6-1 win at Loyola

LINCOLNWOOD -- Teams simply don’t skate out onto Loyola’s home ice and put six goals on the board against the Ramblers, but that’s what York did Saturday against Illinois’ top-ranked hockey team.

“I’ll be honest, even if I knew we’d play our best game I wouldn’t have expected that,” York goalie Adam Kaczmarek said. “That was one of the fastest games we’ve played all year. We came out real slow yesterday against OPRF (in a 3-2 shootout win) but we came out flying today. It was great to see.”

Nicosia had two goals and an assist in the win and York also got goals from Sam Kamienski, Ryan Booth, Elijah Maurer and Shane Gorski.

Add a night when Kaczmarek was in the zone against a Loyola team that took 38 shots, and York had the recipe for a win.

“He was tracking every puck very well and you could tell right away he was on,” York coach Matt Boeing said of Kaczmarek. “And when he and (goalie Ben Foley) are playing on that next level, it’s incredible playing for them and it gives our boys confidence.”

Loyola withstood York’s high-energy start to Saturday’s game and went up 1-0 when leading scorer Jack Gustafson buried a puck at the 12:20 mark of the first period. Loyola won a face off in its offensive zone and Ryan Boersma found Gustafson in front for his 17th SHL goal of the season.

York answered fast, scoring twice in a 25-second span to get a lead that it would not relinquish. Nicosia scored on assists from Sam Kamienski and Aaron Curry at 11:47, and Kamienski struck at 11:22 on assists from Michael Iorii and Elijah Maurer.

That York turned the tables in such rapid fashion spoke to the confidence the Dukes have developed during a rugged SHL season. York has two shootout wins and four overtime/shootout losses in SHL play this year, and those losses in tight games against top teams have been instructional.

“You gain experience from losing and know what you have to do next time,” Nicosia said. “We’ve gone through a lot of shootouts and a lot of overtimes so we know what it takes in those situations. It was just a lot of team meetings and a lot of coming together, chemistry-wise.”

Loyola twice went on the power play in the second period and found 13 shots, but Kaczmarek and crew kept a lid on net. York went up 3-1 at 10:05 when Nicosia scored his team-leading 16th league goal of the year, crashing the far post on a shot taken from deep on the left side by Kamienski and stuffing home the rebound. Maurer also assisted on the goal.

Kamienski’s two assists on the day gave him a team-leading 16 SHL assists this season, while Maurer’s second assist was his 11th of the year in SHL play.

Nicosia capped a fine weekend, having also chipped in a goal and an assist in York’s win Friday over OPRF, plus the game-winning shootout goal.

But it’s not his scoring that Boeing appreciates most from Nicosia.

“It’s his leadership,” Boeing said. “If Frank sees someone slacking, he’s jumping on them right away. He takes the game as serious as it comes and he leads by example and makes the guys better by doing that.”

York made it 4-1 just 44 seconds into the third period when Ryan Booth scored on assists from Greg Lee and Jonathan Wood. Trailing 4-1, Loyola brought the thunder, as Keaton Lillybridge, Will Schreiber, Will Steele, Gustafson and Boersma all found shots on their sticks to the game’s 13-minute mark.

Kaczmarek shined at various points during Loyola’s pressure, holding firm before Maurer gave York a 5-1 lead at 12:45, racing up the right side on a breakout and scoring his 5th SHL goal this year. Nicosia and Matt Moore assisted on the goal.

York’s Shane Gorski ended the day’s scoring with a goal at 4:29 to make it 6-1, with Lee and Robert Plummer getting assists.

“The puck would be in our zone for a while but then we’d go right back, get a good forecheck, and score,” Kaczmarek said. “We scored goals every way we could, just throwing it on net and getting what we could.

“The last time we played them, we lost on a goal with 14 seconds left in overtime. I felt like if we played them again we could win, and I felt like I matched up pretty well with them. They play a lot like a triple-A team in their systems and it’s a really fun team to play against.”

York’s line of Lee, Gorski, and Bobby Plummer were one of many reasons for the Dukes’ Saturday success.

“Before the game, Lee said ‘business is going to be booming tonight’,” Boeing said. “And his line was outstanding tonight.

“Brendan Quinn is a great defenseman, he was super fast on his feet tonight, and Ryan Booth put a puck in net. Zach Despinich also got some power play time today and he was really calm with the puck, made a lot of really good passes and played heads-up hockey — everybody was chipping in and that’s the good thing about this team.” 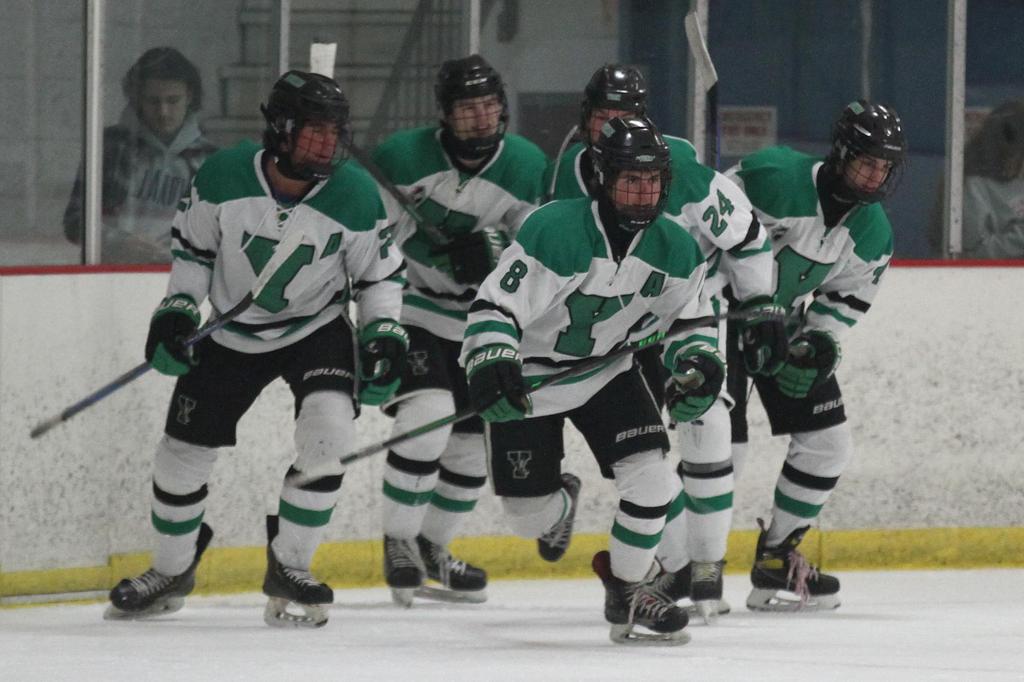 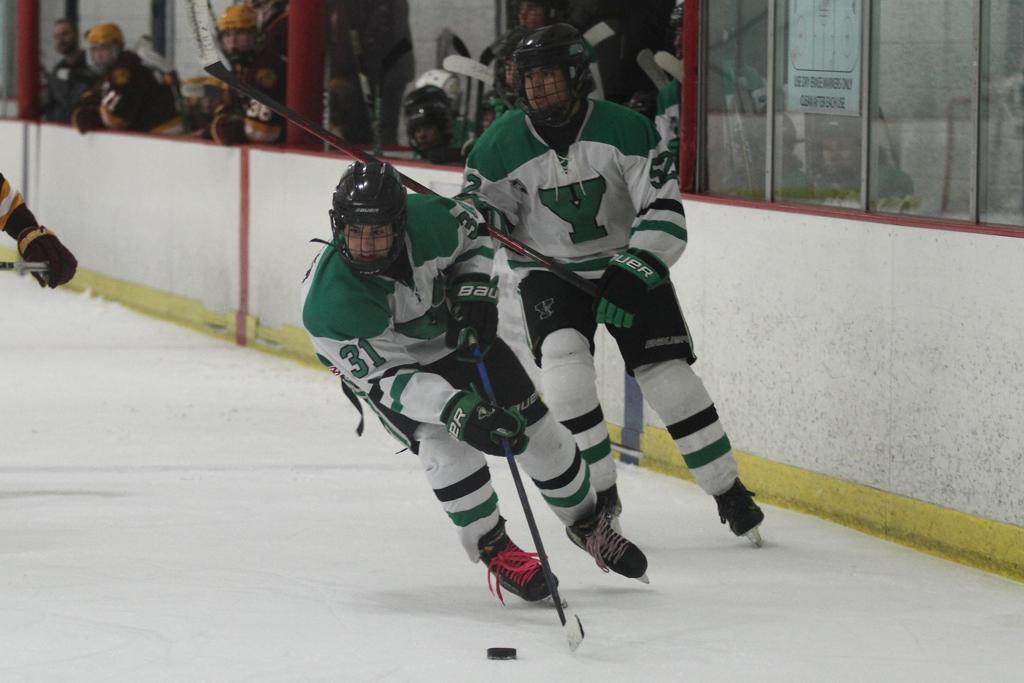 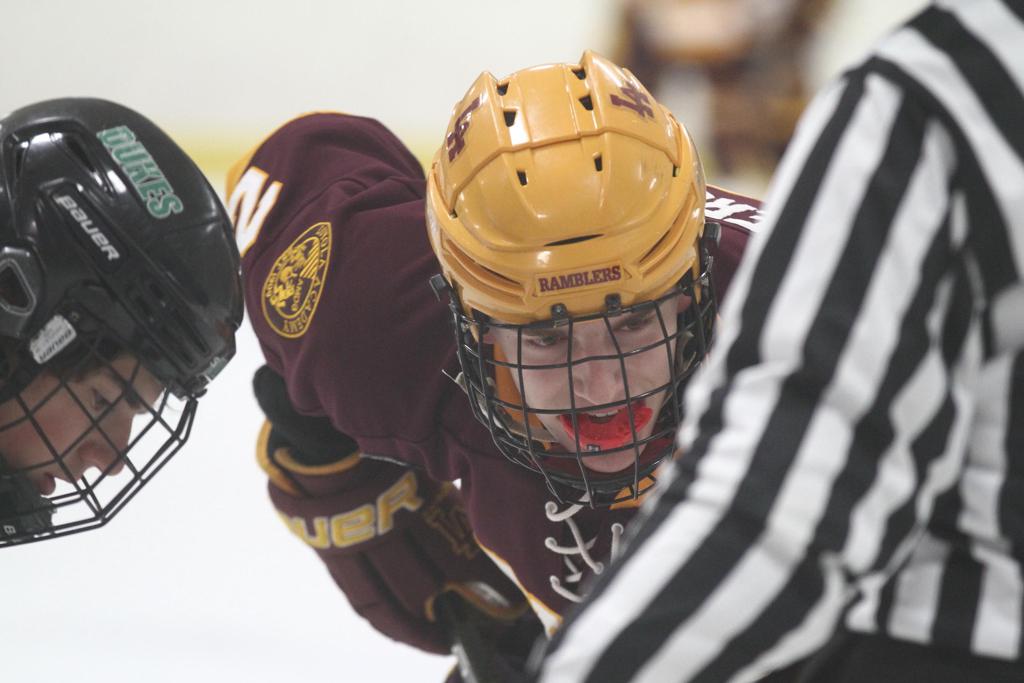 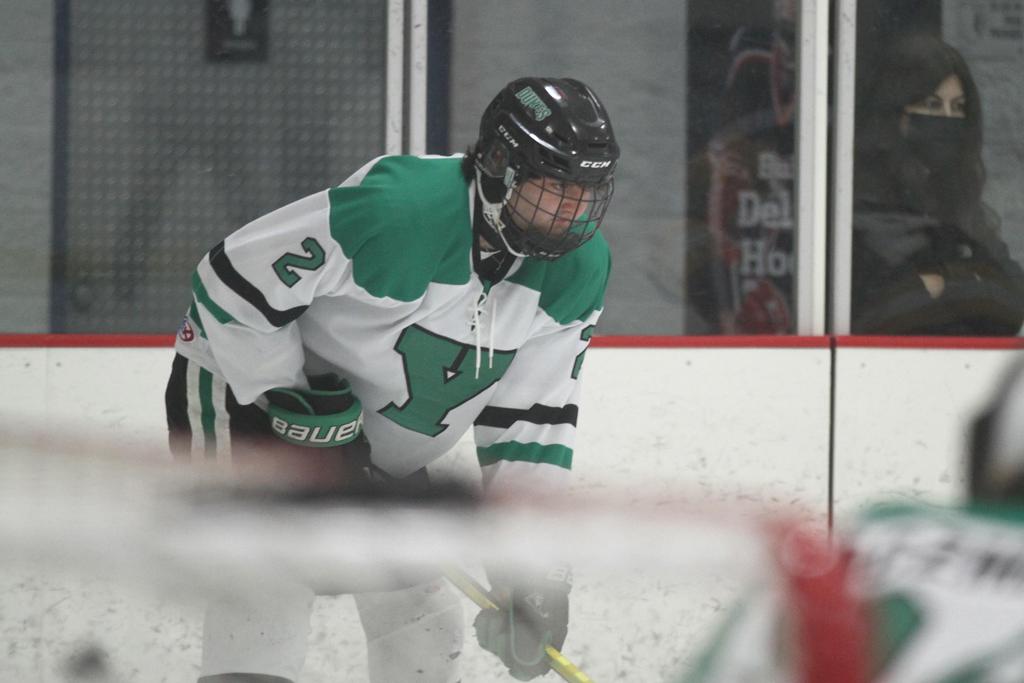 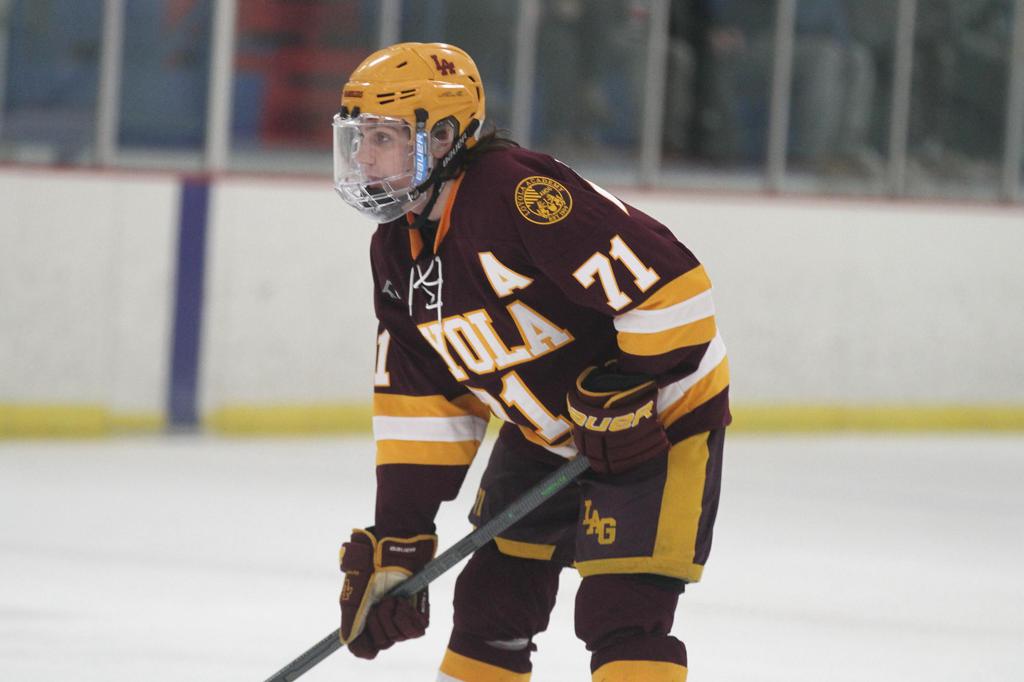 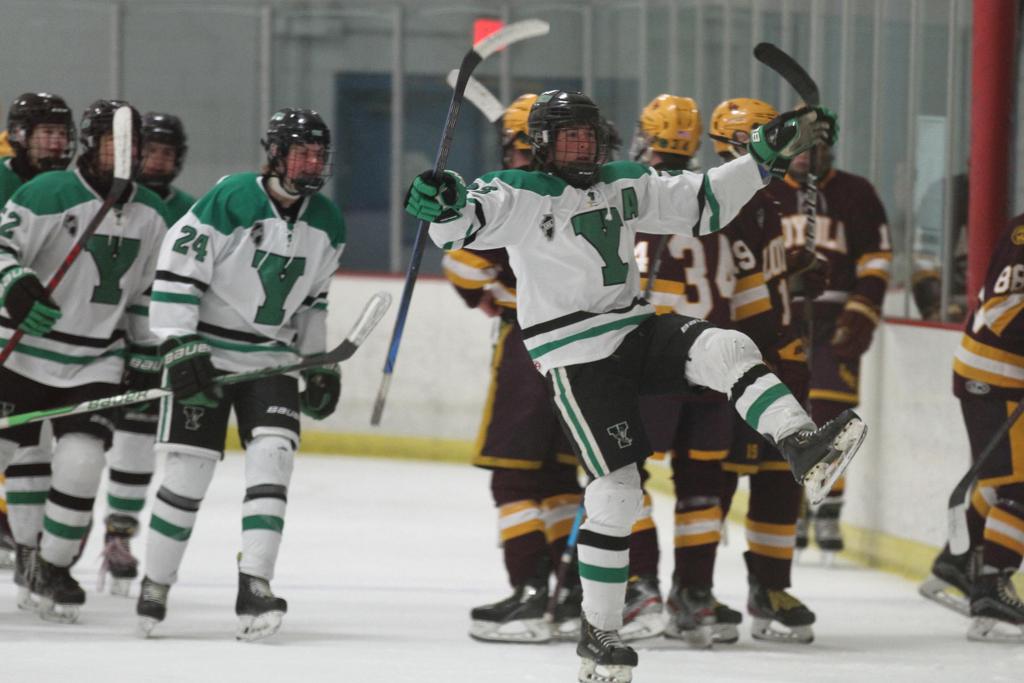 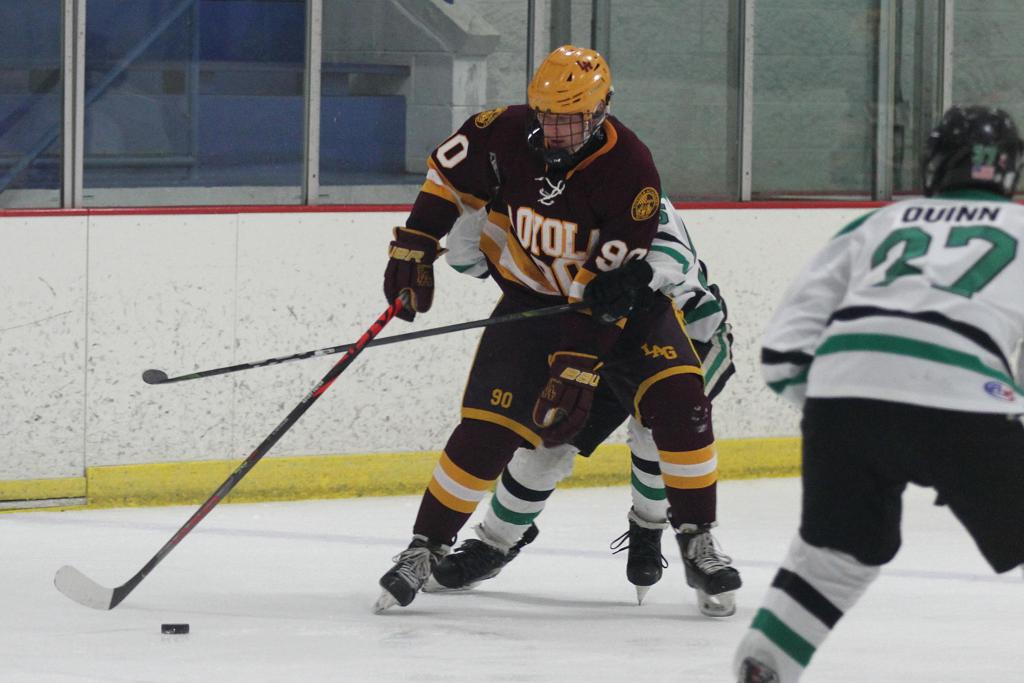 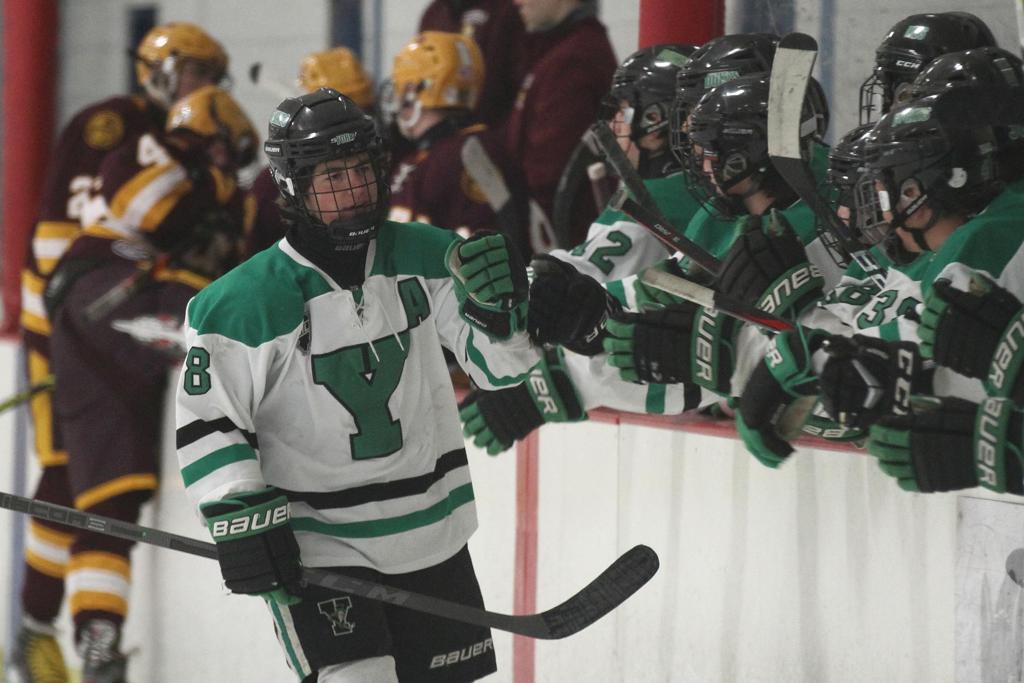 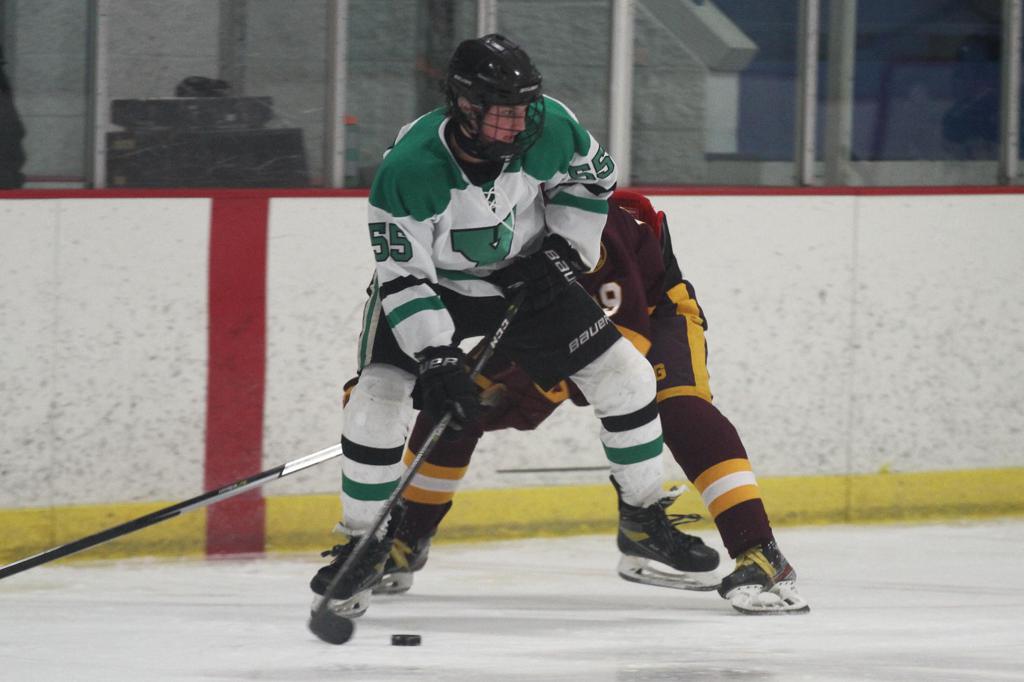 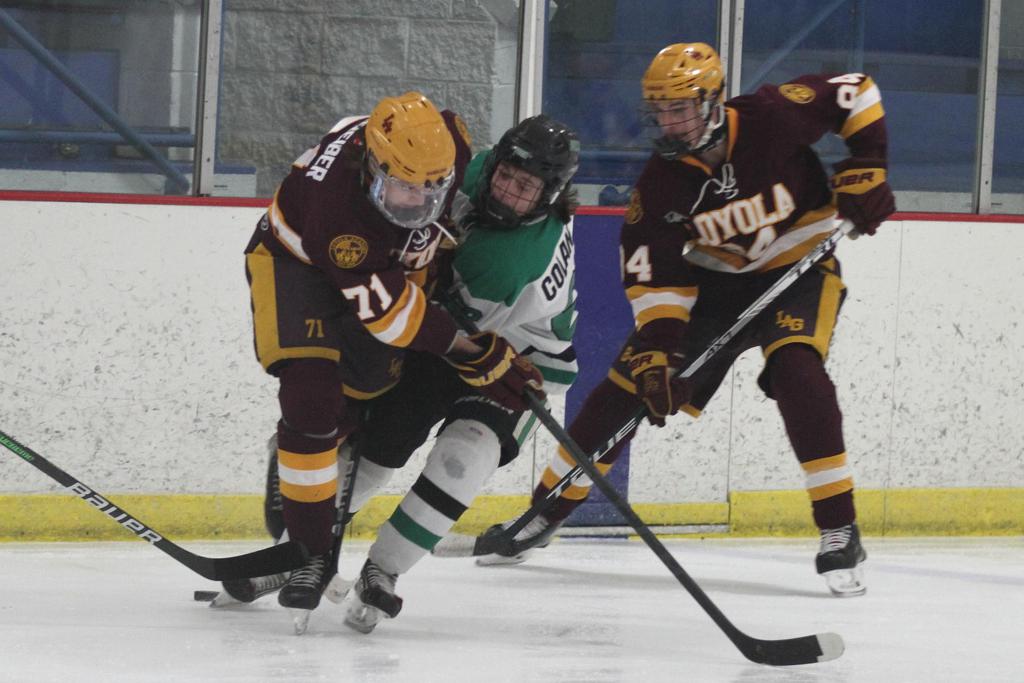 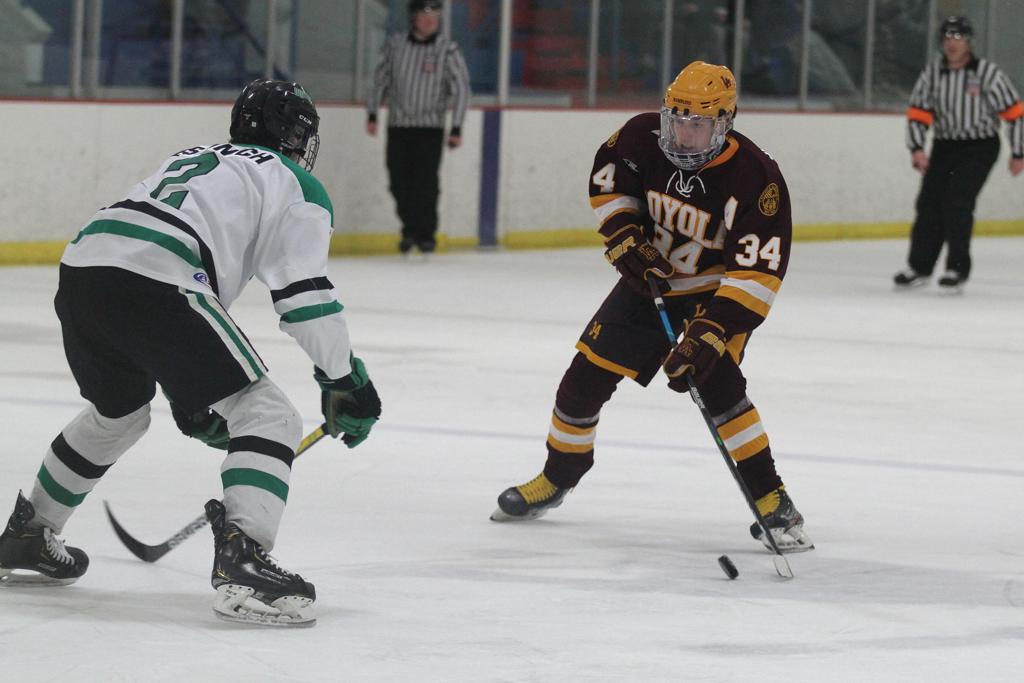 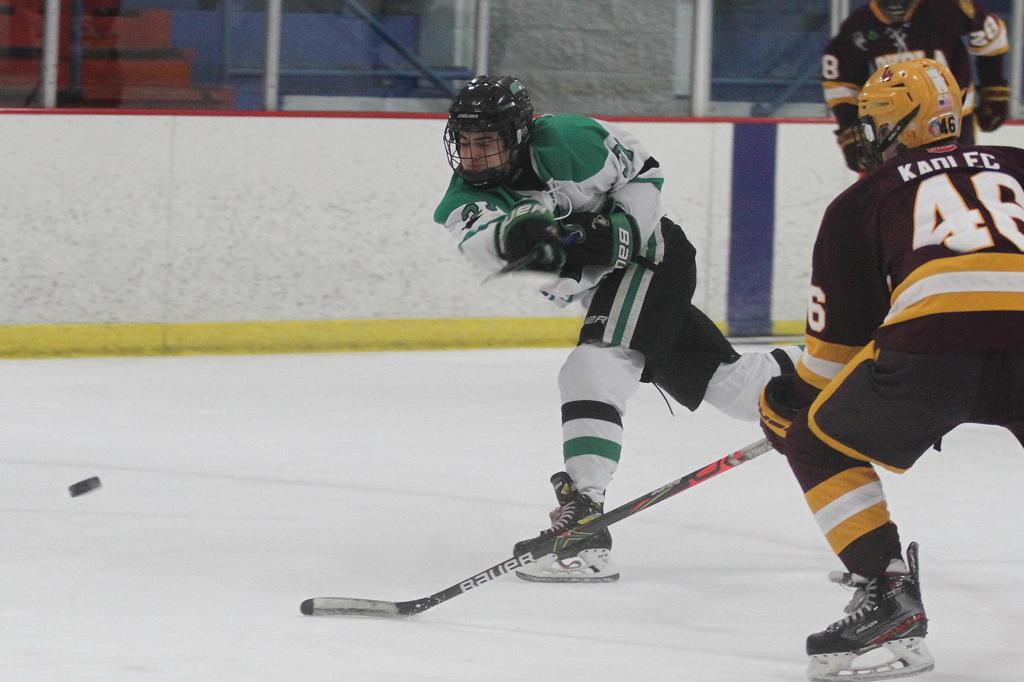