Loyola's revenge on Stevenson comes in a shootout

BUFFALO GROVE -- Per league-wide statistics, teams scoring first had won 70.5 percent of all Scholastic Hockey League games played this season prior to Thursday’s showdown between Stevenson and visiting Loyola.

To paraphrase a famous adage, there are lies, darn lies, and statistics.

Despite Stevenson scoring first on its home ice to curry the statistical god’s favor, Loyola swam upstream against the numbers to win in a shootout, in a battle between the top two ranked teams in Illinois and the two teams currently sitting atop the SHL standings.

“There was no way we were losing this game,” Loyola captain Ryan Cowen said

There was some extra wind in Loyola’s sails Thursday,  put there by a Stevenson team that had beaten Loyola in their first two meetings this season.

And revenge games are a real thing.

“One hundred percent,” Loyola forward Ryan Boersma said. “Before the game, our coach said he shouldn’t even have to say anything to get us fired up. That was a revenge game for us, against a team that’s kind of had our number this season.”

“If we play our game, I don’t think anyone is going to beat us. And after those two tough losses to (Stevenson), we knew we had to win this one,” he said.

It was Cowen who closed the deal for Loyola (15-3-0 in SHL play), skating up to gather the puck at mid-ice in a shootout and then burying that puck to give Loyola the 4-3 win.

A scoreless first period saw both teams shaking the rust off after the holiday break. Stevenson (15-6-0) struck first when Will Harlow took a puck to the goal line on the left side and centered a sweet pass that teammate Alan Wu buried from point-blank range at the 15:20 mark.

It was Wu’s first SHL goal of the season. The Stevenson forward has battled injuries and Patriots assistant coach Dan Wood appreciates what a healthy Wu can bring to the table.

“Wu really stood out. He’s had a tough year with injuries and illness but he’s back, healthy, and he was flying out there,” Wood said.

Loyola’s Will Schreiber tied the game at 1-1 at the 11:05 mark, scoring the first of his two goals in the game on assists from Jack Gustafson and Boersma.

Boersma sent a puck forward off the boards on the right side to Gustafson, who centered a pass to Schreiber near the blue line.
Schreiber took the puck over the line and skated to the right side before unleashing a shot that hit nothing but the back netting.

Loyola took a 2-1 lead late in the second period when Schreiber and Garet Grady assisted on a goal by Gustafson at 1:32. The play culminated in Grady stealing a puck inside the blue line on the right side, skating up and passing left to Gustafson, whose shot from the circle stretched the back netting.

It was Gustafson’s team-leading 16th SHL goal of the season.
After an out-of-synch first period for both teams coming off of winter break, Loyola’s second period was exceptional.

“It was a choppy first period. We had two or three power plays, including about ten seconds of five-on-three,” Loyola coach Scott Ciraulo said. “We were just a little off but I thought in the second period we shook off the rust and really turned it on … things were more going our way, we had all four lines playing well. Those spurts are what we’re capable of.”

Schreiber struck again at the 13:10 mark of the third period to give Loyola a 3-1 lead. After a face-off on Stevenson’s end, the puck traveled to the point on the right side where Michael Lattanzio fired on net. Lattanzio’s shot was deflected down by Cowen and fell to the ice in front of the Stevenson goal, where Schreiber buried it.

It was Schreiber’s 12th SHL goal of the year.

Trailing by two goals, Stevenson — currently sitting atop the SHL standings and ranked second in Illinois behind Loyola — found itself between a rock and a hard place.

That hard place was made particularly uncomfortable since the Patriots were playing without forward Davis Jegers, whose 19 goals and 12 assists has him leading the SHL in points.

But a Stevenson team that has played with depth, team unity, and high confidence all season didn’t flinch in the face of a two-goal deficit.

“We went into the locker room after the second period (down 2-1) and our thing is, we think we’re the best third-period team in the state,” Harlow said. “We showed that by staying positive on the bench and playing confident the whole way through.

“Our big thing this year is fighting through adversity. Kids stepped up today and played a good game with (Jegers) not there.”

A wild scrum and a loose puck in front of the Loyola net keyed Stevenson’s second goal. Wu backhanded a shot in the slot that was initially stopped before landing near the left post, where Patriots forward Andrew Lermer sent his 9th SHL goal home to make it a 3-2 game at 10:50 of the third period.

The goal wasn’t without some controversy, however, and officials convened for a discussion before confirming Lermer’s goal. Loyola felt that goalie Cirian O’Brien had frozen the puck in a crowd just before Lermer’s goal.

“We had a tough call on that goal and we were all a little upset,” Ciraulo said. “Part of that’s on me and we’ve got to have more control because then we kind of let them back in it. But credit to (Stevenson). They’re a really good team and they’re in first place in the league for a reason. They’re great.”

Two minutes later, Stevenson tied the game when Brandon Schultz took the puck on a 60-plus foot trek across both blue lines up the right side before cutting left and whipping in a shot from just outside the top of the circle on the left side.

“On the bench there was no panic when we went down two goals. You could feel that we were going to come back. The goals we scored weren’t the prettiest goals, but they were hard-working goals, and it was good to see us battle back.”

After scoring his 7th SHL goal of the season on an assist from Ethan O’Gradney, Schultz’s answer for the two-goal comeback was simple.

“We got some of the rust off and got back to what we do,” Schultz said.

The remaining eight minutes of regulation saw O’Brien stop shots from Wu and Dylan Jette down the stretch, and Stevenson goalie Jonathan Adler do the same on shots taken by Loyola’s Bobby Sharfstein and Schreiber.

The ensuing three-on-three overtime period had Loyola’s Max Gabel sending a shot off the post, and Harlow tracking back hard to break up an attempted shot by Loyola’s Mikey Baker.

Stevenson’s Nolan Jones took a puck up the boards on the right side and centered a deep pass that Adler covered with roughly two minutes remaining, and Adler gloved a Gustafson shot late to stop the game’s final truly dangerous scoring chance in the run of play.

O’Brien poked away Stevenson’s first penalty shot attempt and Cowen ended the night with his subsequent game-winning shootout goal, skating in just outside the left side of the slot and firing in the game-winner.

GAME NOTES:
Stevenson
What problem does Loyola pose for opponents this year? Allow Stevenson sophomore Schultz to simplify things:
“They are very big, physical, and they pass the puck like an NHL team,” Schultz said. “They move it around well and they’re not afraid in the corners. But we trust our depth and we knew in the locker room who had to step up.
“This is the closest team I’ve ever been a part of. From top to bottom I feel like these guys are like my older brothers. I can look up to all of them for advice, in practice and games, and know I can ask them anything.”
Stevenson captain Harlow was proud of the game his side played against Loyola.
“Schultz has been playing great and Adler kept us in it, of course,” Harlow said. “Nolan Jones, Dylan Jette — and Alan Wu was really fast tonight, and him getting us that first goal was great for the team. Overall, I thought we all played well. We took five points against the number one team in the state this year. That’s not bad at all.”
Wood was similarly pleased with the team-wide contributions he got on Thursday.
“Nolan Jones had an outstanding game but you can probably say his name after every game” Wood said. “Will Harlow had a great pass on that first goal, and (Zack) Kulik played his first game in a while and he when he was out there, he was doing great.
“Not having Davis hurts but we had a number of guys step up. Our depth is so strong that we’re missing one of the best players in the state and we didn’t miss a beat. We weren’t going to replace (Jegers) with one guy. We had to replace him by committee.”
Loyola
After Stevenson beat 3-1 on Nov. 17, Loyola coach Ciraulo expressed hope that the loss opened the Ramblers’ eyes on how much work was needed to live up to expectations.
Boersma has seen a change in his team since then.
“Our coaches said ‘you’re ranked number one but you haven’t beaten (Stevenson) once, so there’s no reason to believe it’,” Boersma said. “The message is not to get complacent because we’ve seen how deep this league is this year.
“We’ve become a lot more disciplined and we’ve take a lot less penalties in our last few games. That’s one of the reasons we came out on top against New Trier (3-1 on Dec.11). We’ve also been starting practices a little earlier, putting in the work, and there’s just been a more consistent message around the room.”
Hockey is obviously a team game and coaches can be justifiably reluctant to single players out, and thus run any risk of hurting the all-for-one mentality of the group.
Ciraulo officially retired from singling individual players out after Thursday’s win.
“This is the last time I’ll call someone out because we’ve got to keep it team-oriented,” Ciraulo said. “But a guy that doesn’t really get a lot of shine is Mikey Lattanzio. He had a solid game, he played a little forward earlier this year but he’s a defenseman, and he’s the type of kid that does what you ask of him and he always makes the most of it.”
Loyola’s game against Stevenson marked the first of three tough games in four days for the Ramblers, who host York Saturday and are on the road at New Trier Sunday.
Loyola is welcoming the challenge.
“This is what you look forward to during the regular season. These big games mean a lot more,” Boersma said. “There’s more energy around the game and it’s exciting for the team to come out on top. So we’re looking to roll the momentum through the weekend.” 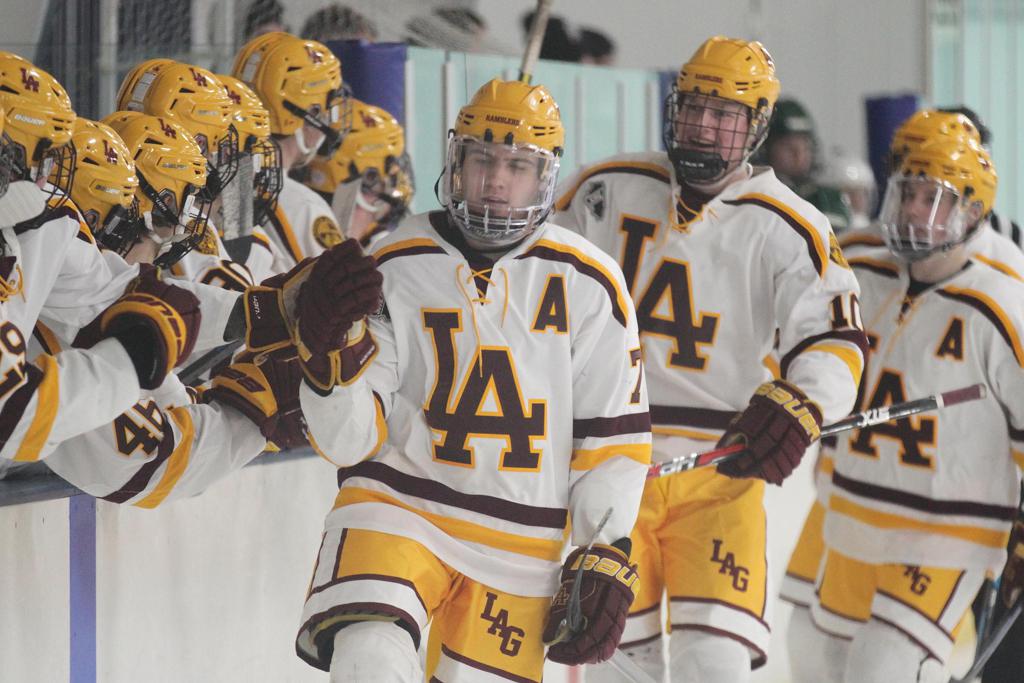 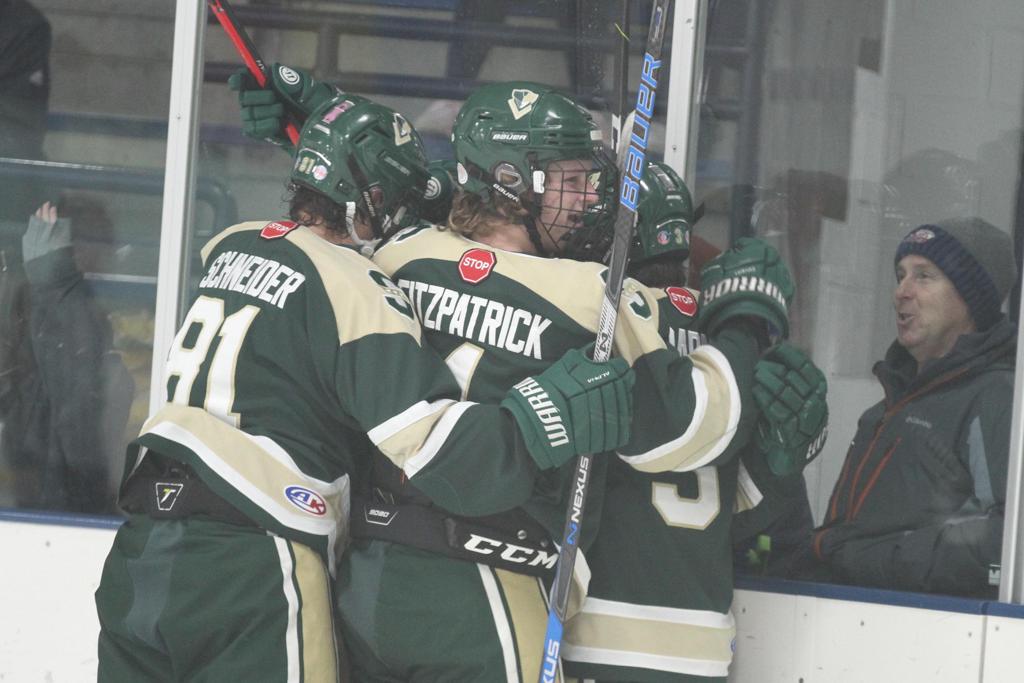 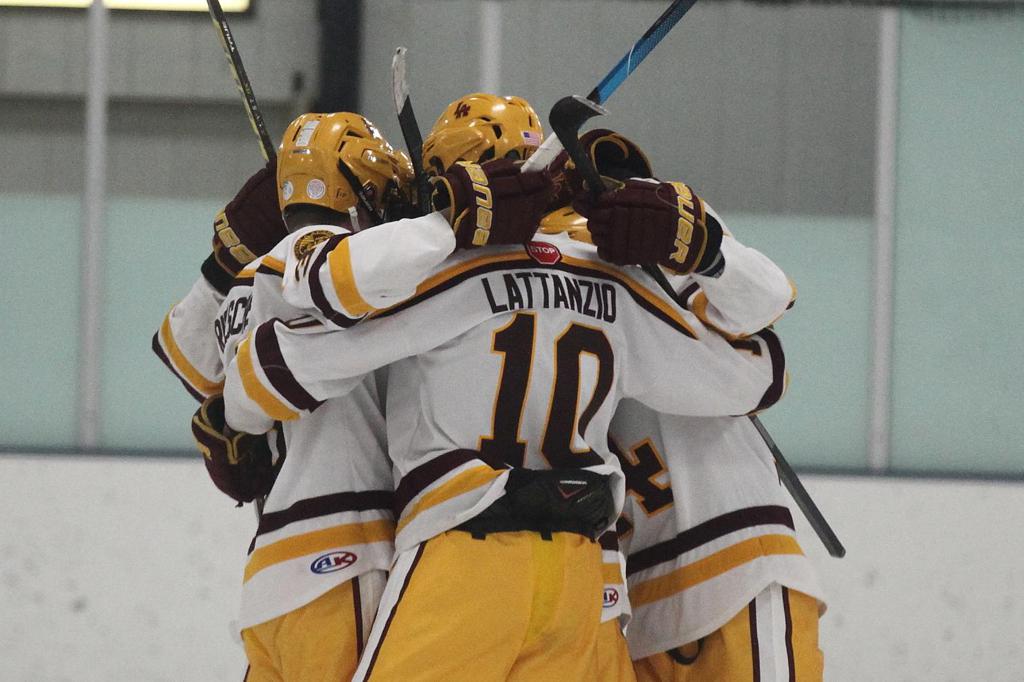 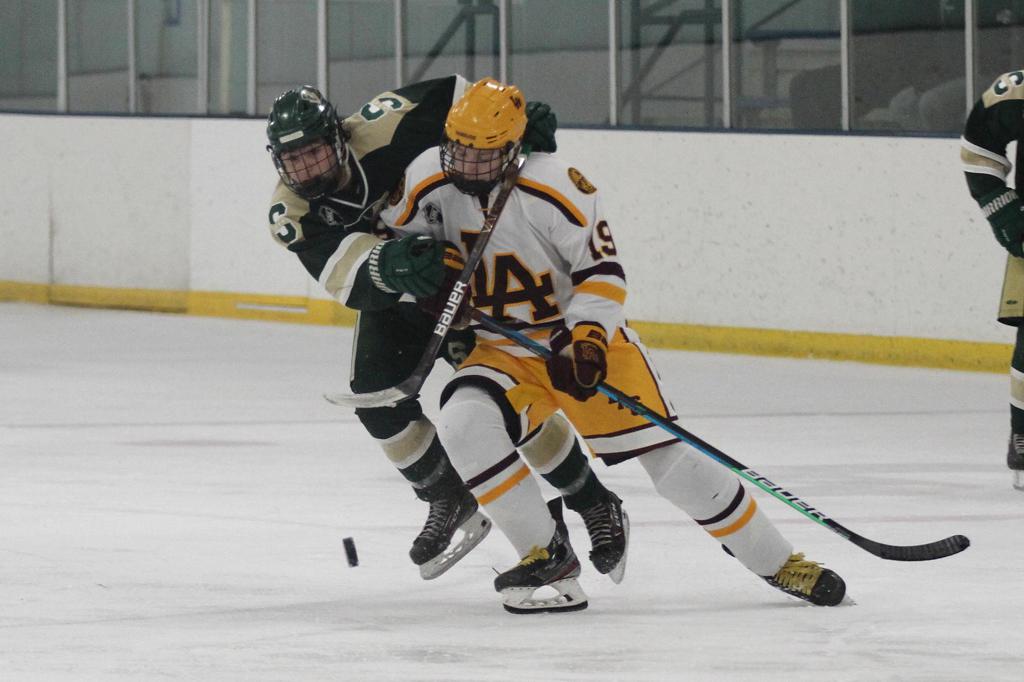 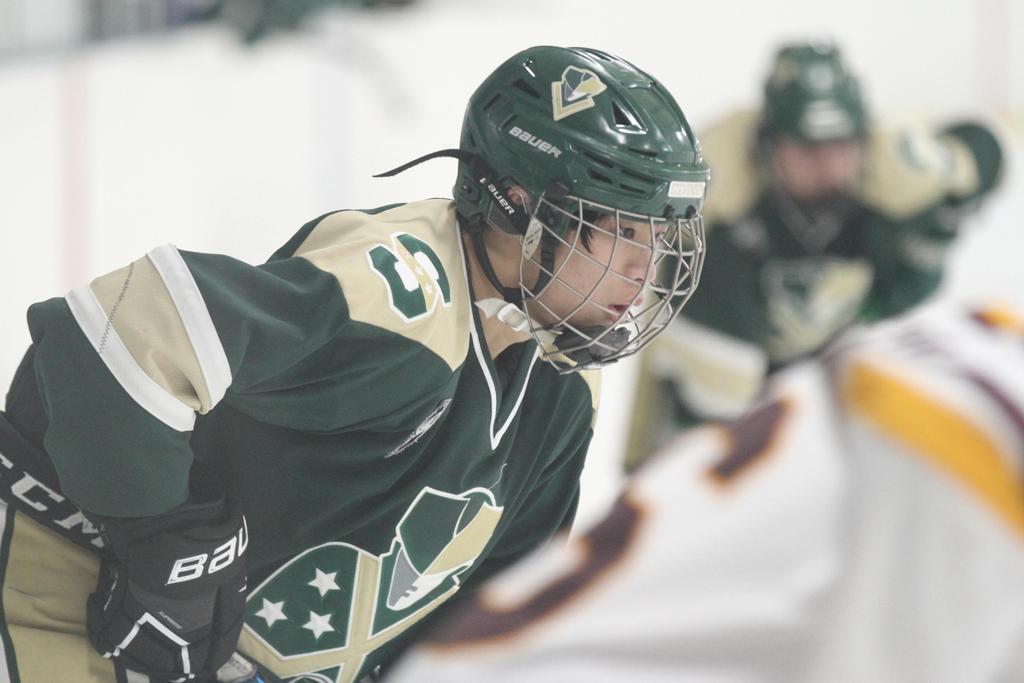 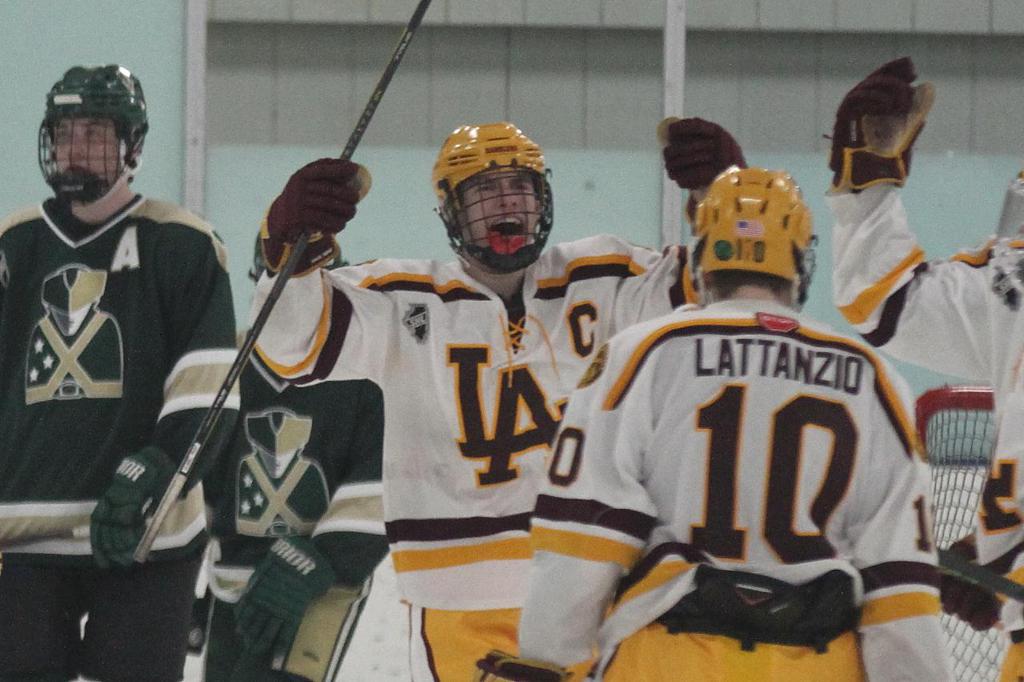 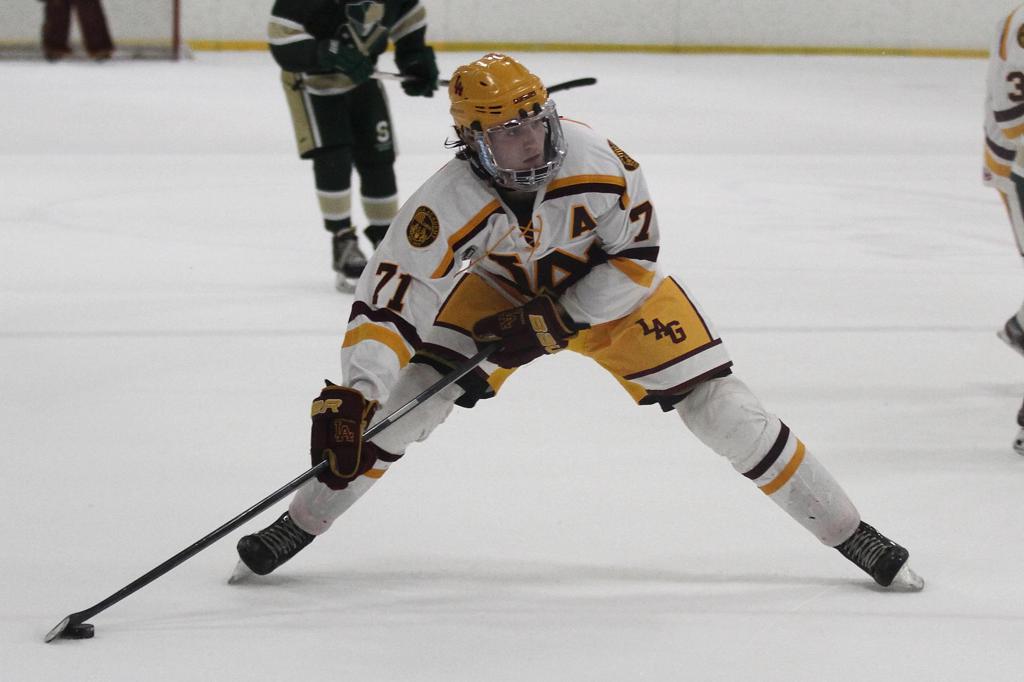 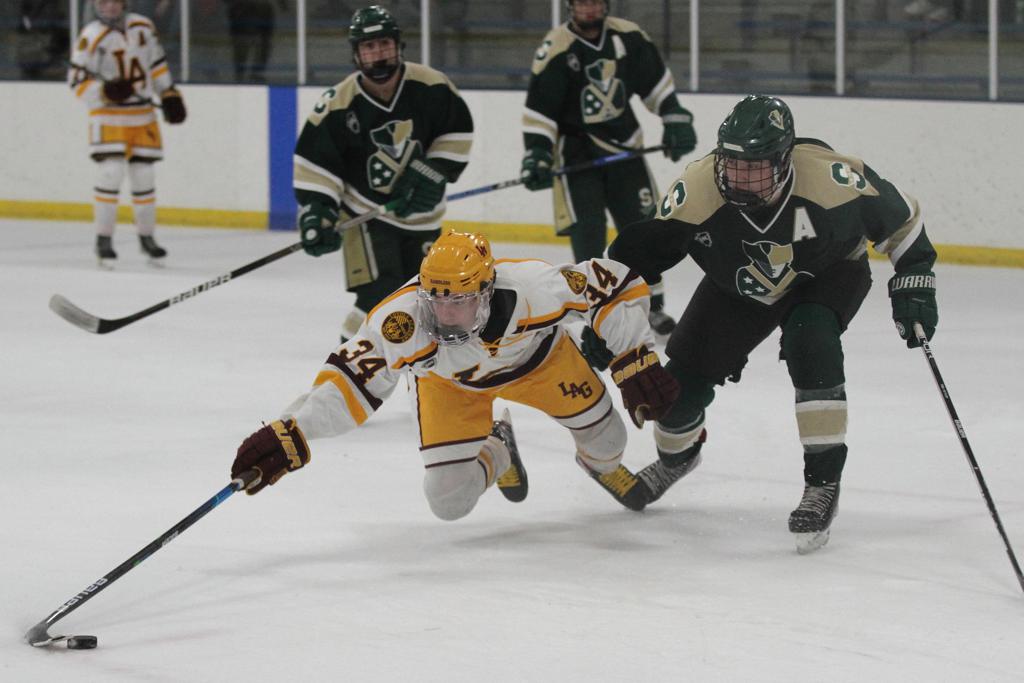 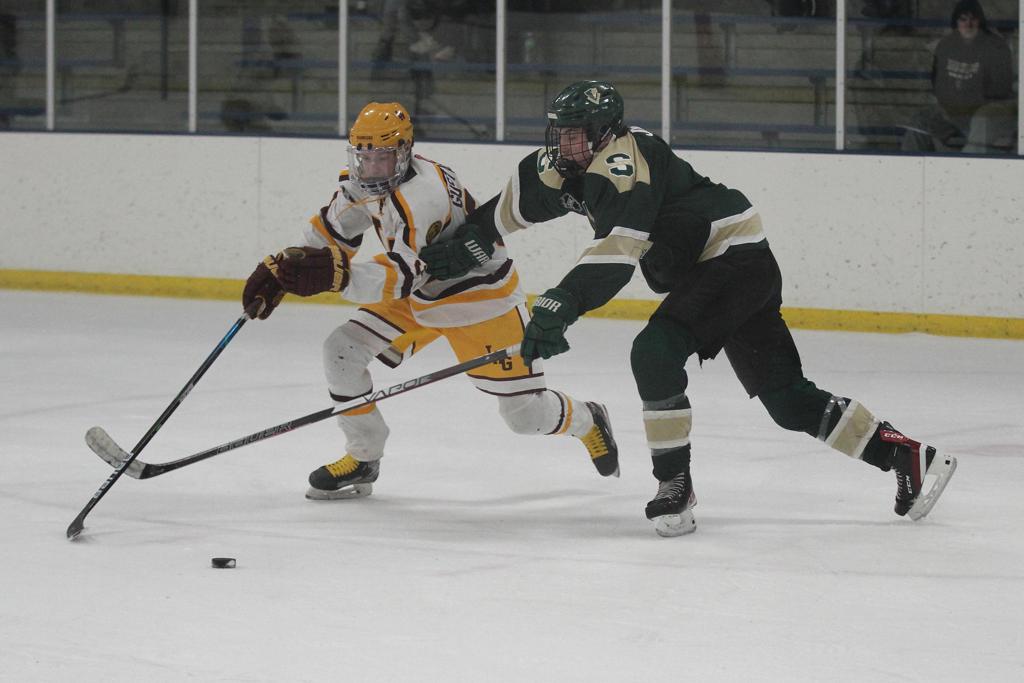 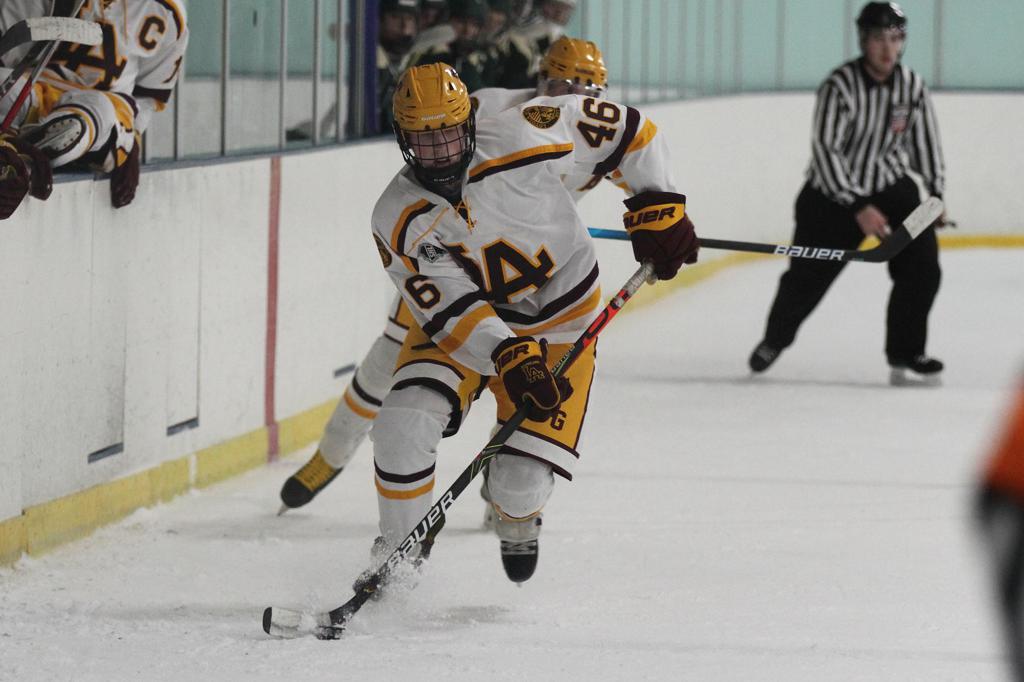 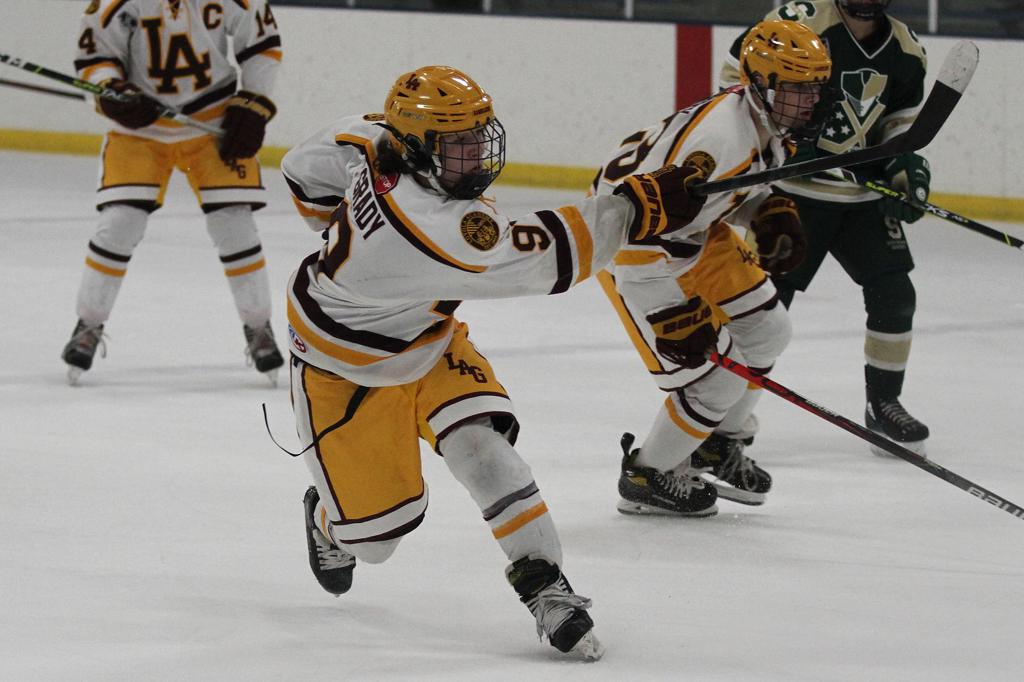 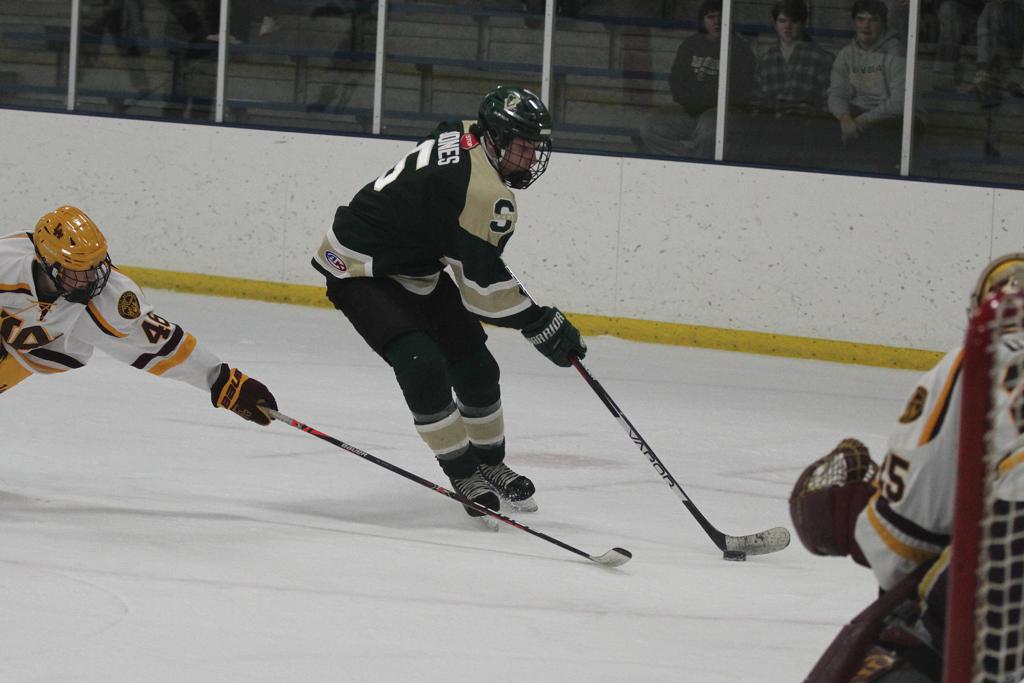 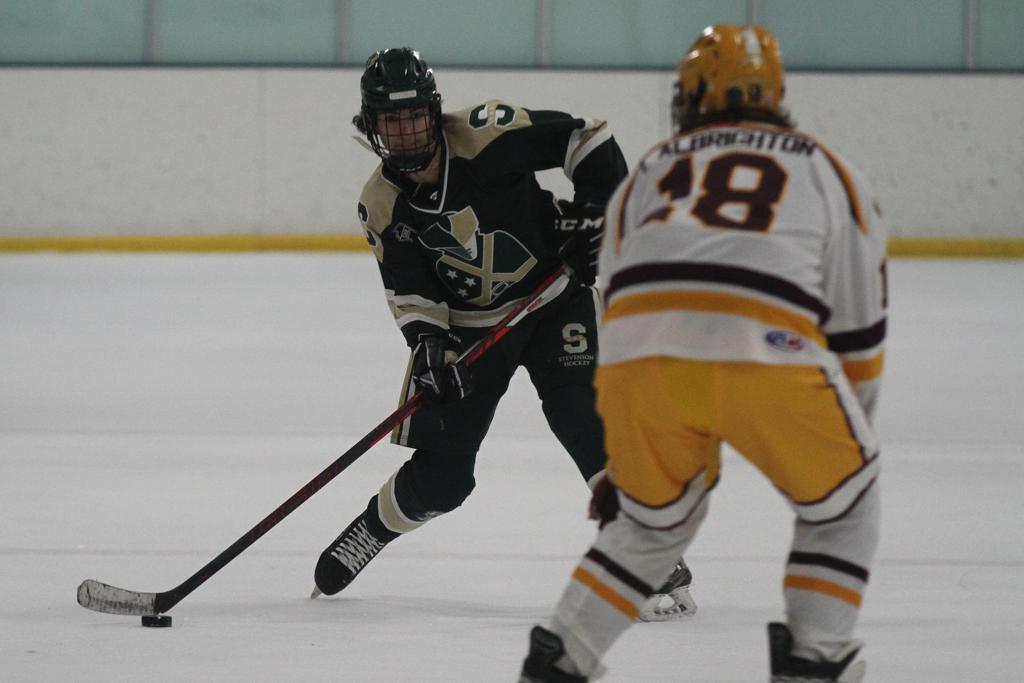 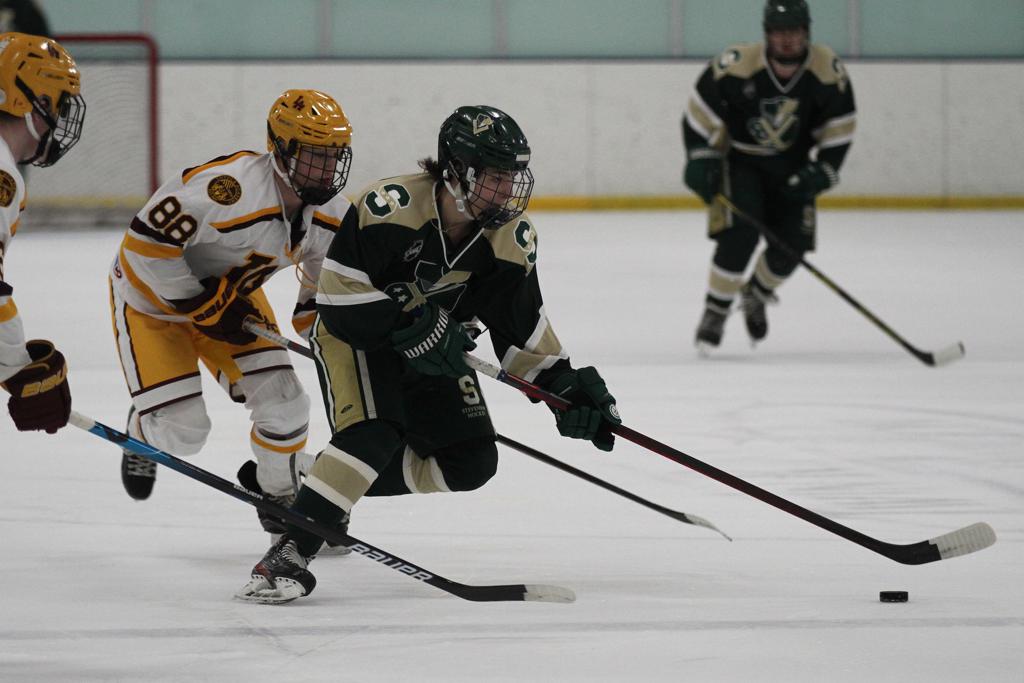 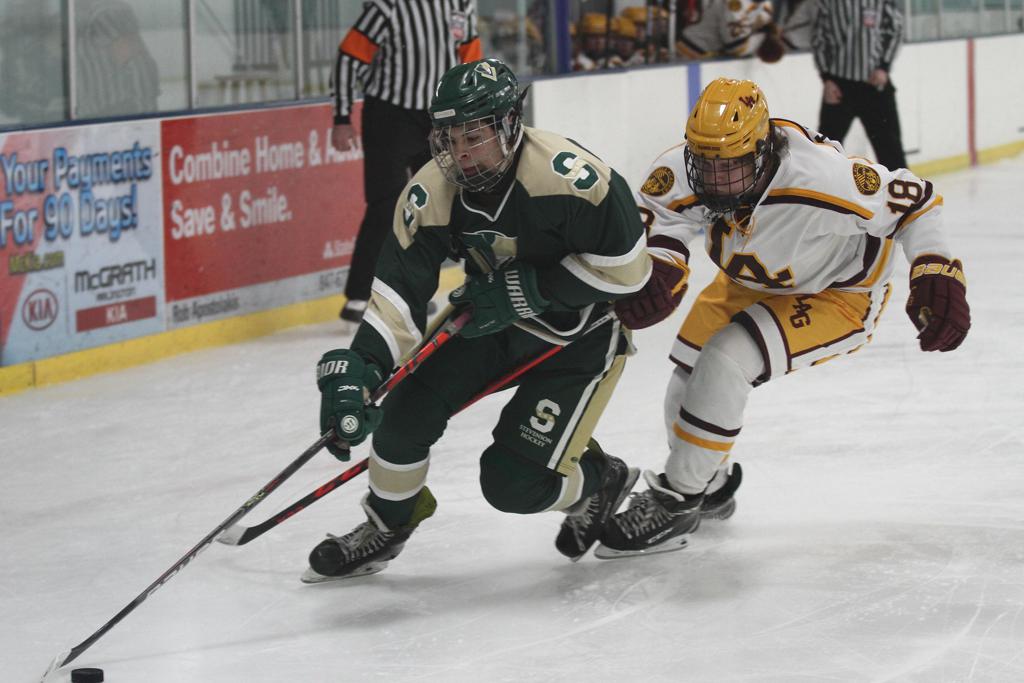