WILMETTE -- “This is one of the best teams I’ve ever coached,” Stevenson coach Tom Wood said.

“I’ve never been on a team as close as this one,” Stevenson forward Cam Schneider said.

Add team depth with that talent and closeness and through 12 games, Stevenson has displayed a holy trilogy of desirable qualities in a high school hockey team.

All of those qualities showed up on Loyola’s home ice during Stevenson’s 3-1 win on Wednesday and heck, you can toss hunger into the equation, too.

The box score shows that Schneider scored the game’s first goal in the first period and teammate Davis Jegers scored twice in the second. Loyola’s goal came in the second period from Ryan Boersma.

In its last four games, Stevenson posted 4-1 wins over Glenbrook North and Glenbrook South, and a 3-1 win over New Trier to go along with Wednesday’s 3-1 win.

That’s four goals given up in four games against a who’s-who of perennial state powers — a fine stretch of play by any definition.

“Teams like New Trier and Loyola have been stacking their top lines, and (Schneider) and Nolan (Jones) have been playing great defense,” Wood said. “So those lines that are scoring against everybody else — we’ve been able to shut them down. So it’s really been our ability to have guys that play defense against top lines, rather than have scorers playing against them.”

The ability to send multiple quality lines out on the ice has also keyed Stevenson’s play.

“Most teams aren’t as deep as us and they can’t play their top line the whole game,” Jones said. “So if we can have our bottom lines score against their bottom lines, that really helps us. The top lines all have skill but it’s the bottom lines that win games.”

A game that ended with Loyola posting a 22-20 edge in shots began with Stevenson (9-3-0 in SHL play) spending the game’s first few minutes in its offensive zone against Loyola (10-2-0).

Stevenson’s Will Harlow and Rafael Biedron both found shots to the 15-minute mark of the first period, which were turned away by Loyola goalie Cirian O’Brien.

Loyola’s Garrett Grady and Jake Orzechowski connected to a point-blank Orzechowski shot saved by Stevenson goalie Jonathan Adler, who saved shots from Loyola’s Nicholis Malaniuk and Matthew St. John to the 6:40 mark of a back-and-forth game.

Schneider struck at 5:24 on assists from Jones and Ethan O’Gradney. Loyola pressured well for the next four minutes but Adler and his defense were up to the task, and Stevenson applied more pressure of its own in the final 90 seconds of the period.

“(Jones) was exceptional tonight,” Wood said. “We’ve had him matched up against everybody’s top line and Will Harlow and Zach Meyers have played a lot as well. We’re pretty balanced across all of our lines so it’s pretty difficult to get a mismatch against us and it’s the same with our ‘D’, where we’ve also got depth.”

Loyola’s Jack Gustafson located a trio of shots to start the second period but Adler again met the challenge. Jegers scored his first goal at 12:36 of the second period, with Dylan Jette and Mac Fitzpatrick getting assists, to give Stevenson a 2-0 lead.

Loyola went on the power play and hit pay-dirt when Ryan Boersma scored at 9:28 to cut Stevenson’s lead in half. But it only took Stevenson eight seconds after Boersma’s goal to regain its two-goal advantage.

Jegers struck on a Spencer Harman assist to provide the 3-1 cushion. “I really like how we bounced back after (Loyola) scored their goal,” Wood said.

More than 26 minutes without another goal followed, and penalties both ways began to pile up to the game’s final buzzer.
Loyola earned an 11-7 edge in shots in the third period. Ryan Cowen, Will Schreiber, Boersma, Grady, Gustafson, and Sam Roti all found shots for the Ramblers, while Jones, James Mendelson, and Max Poretto took swipes for the Patriots.

“I thought we did really well passing the puck tonight, moving the puck, and spreading (Loyola) out — they’re a fast team and we found ways,” Schneider said. “Our ‘D’ probably had something like twenty-something hits tonight. We were able to slow them down and beat them up.”

“Davis (Jegers) and that line were really good tonight and obviously so was Adler,” Wood said. “I thought he was a big part of the difference today. Their goalie played well and Adler had to make some big saves, and he did.”

Game notes:
Stevenson
The Patriots are getting healthy after starting the year with key personnel banged-up, so the evolution of team depth figures only to improve further moving forward.
Can Stevenson keep playing at its current elite level?
“I think we can because our depth really helps our stamina, so in the third period, that’s when we can win games,” Jones said. “Last time we beat Loyola we were down two goals going into the third period and we won.
“I knew we’d be good this year. I knew we had a high floor. But I didn’t know our ceiling would be as high as it is right now.”

Loyola
Loyola still leads the SHL with 20 points after Wednesday’s games, and the Ramblers head into an SHL showdown Saturday with visiting Glenbrook North. Stevenson sits in second place with 19 points and will host Barrington on Saturday.
Wednesday’s meeting between the two teams figures to leave a sour taste for Loyola.
“They out-physicaled us,” Ciraulo said of Stevenson. “There was a lot of plays on the wall where they came out with the puck. They were aggressive on the forecheck and when they got scoring chances they took advantage of it.”
Was there a lesson learned for the Ramblers?
“I hope they learned tonight that they’re not the best,” Ciraulo said. “They need to know that, and that they’ve got some climbing to do to get to the top of the mountain.” 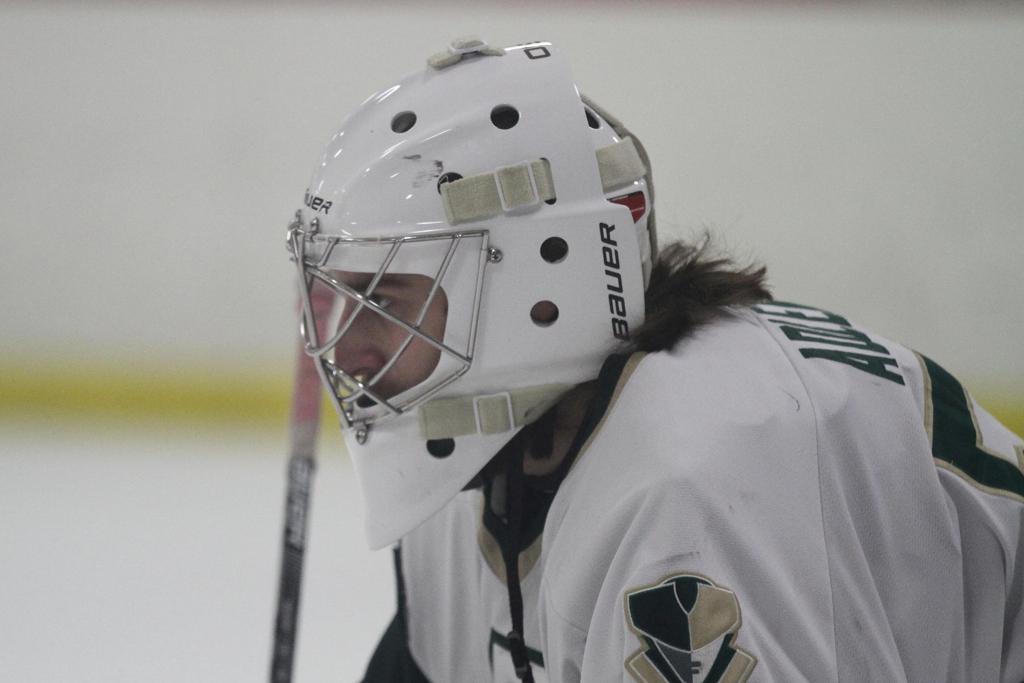 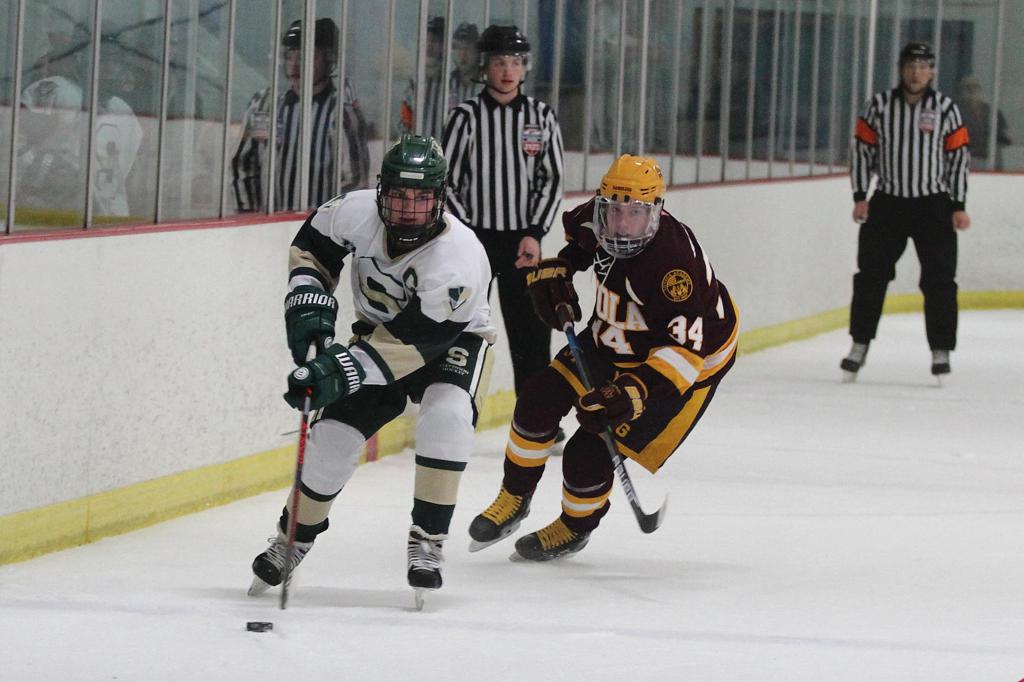 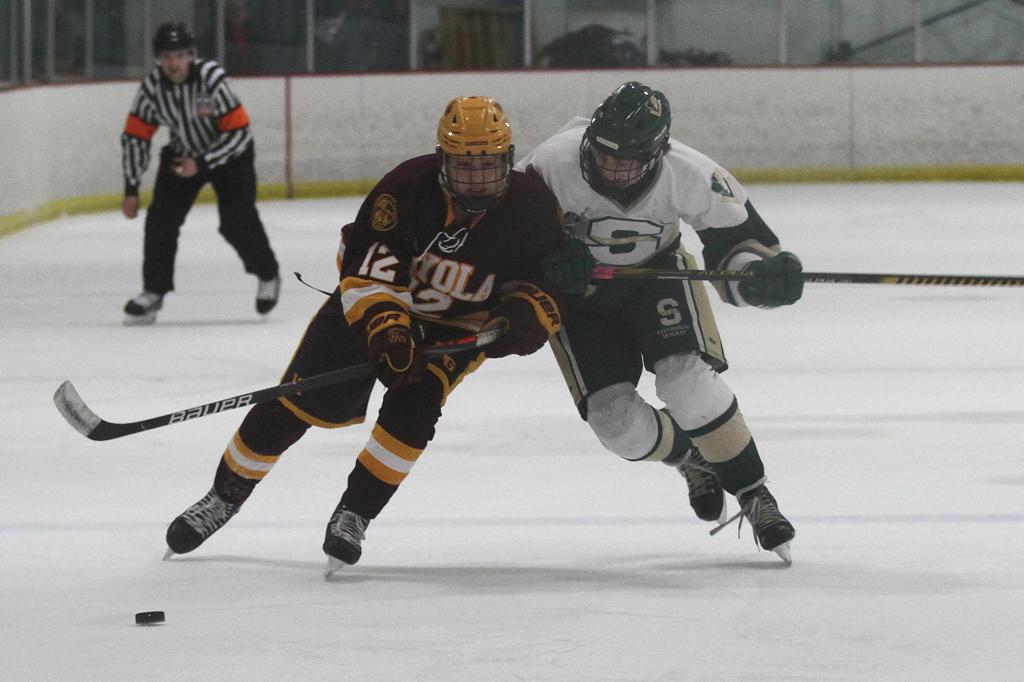 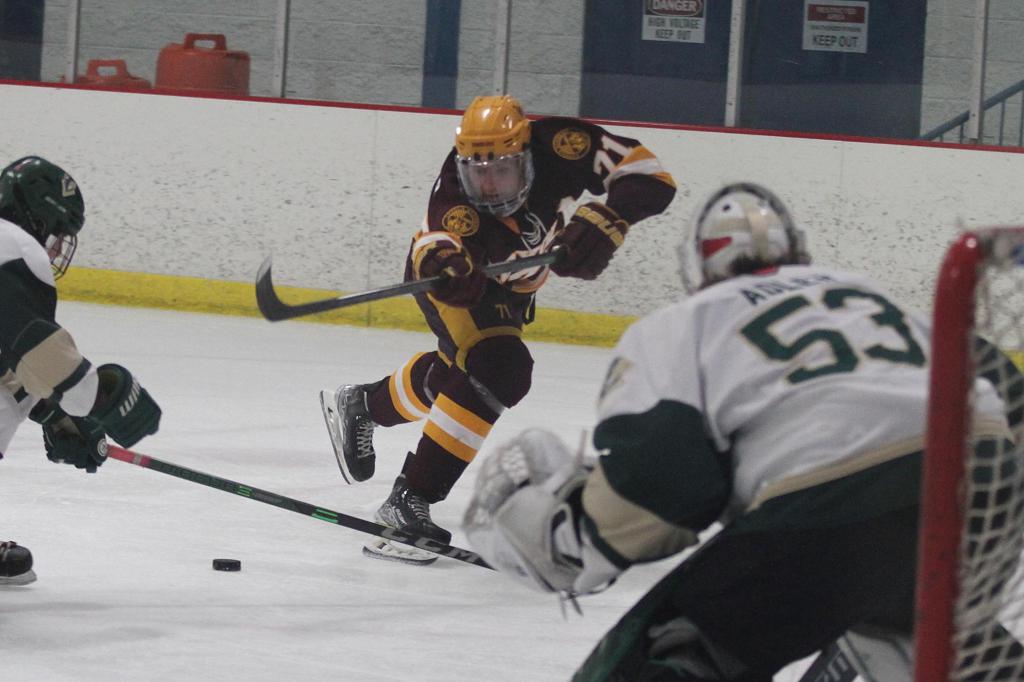 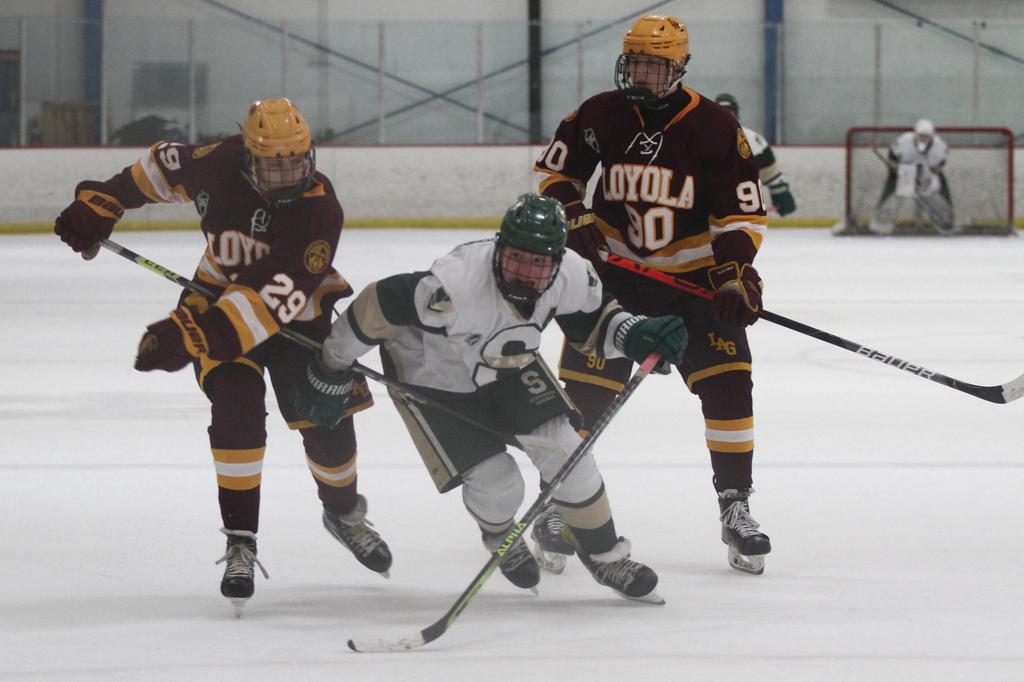