WILMETTE — It’s been a broken record this season, for a top-shelf league marked by a particularly high level of parity in 2021, but after Loyola’s 3-2 overtime win against visiting York on Saturday, Ramblers forward Jack Gustafson offered what could stand as the Scholastic Hockey League motto:

“Anybody can beat anybody in this league,” Gustafson said.

The persistence of Loyola met the resilience of York in Wilmette on Saturday night and it wasn’t until Loyola captain Ryan Cowen scored with 14 seconds remaining in overtime that the outcome was decided.

Loyola (9-1-0) played a strong first period, posted a solid edge in total shots on net, and answered every counter-punch York (6-5-0) offered along the way.

York lost a 6-5 heartbreaker in overtime to Glenbrook North just one night earlier, so Gustafson — who had a goal and an assist for Loyola — knew the Dukes would be hungry for a bounce-back game.

His boys were ready.

“You have to come out prepared for every game,” Gustafson said. “We’re deep and I know whoever we put out there will give it their all, and I trust them all. We’ve had a lot of injuries this year and we haven’t played with a full roster yet, but kids have been stepping up and we came out today and played with a lot of energy.”

It was Gustafson who scored the game’s first goal, on the power play, at the 4:24 mark of the first period. And he did it by not quitting on a play.

Gustafson fired from deep on the right side with under five minutes to play in the period, and his shot knocked off the far post and slid quickly back across the goalmouth. Gustafson then immediately stole the puck from back from a defender, skated in and buried it at the near post.

Gustafson leads Loyola with 12 goals and 12 assists in 10 SHL games.

For York coach Matt Boeing, it’s been penalties like the one that put Loyola on a fateful power play that the Dukes have to get a handle on.

“Five-on-five I think we’re as good as any team in the state,” Boeing said. “But we’ve got to be more discipline and responsible with our sticks. In this league, every game is a battle and you can’t give anyone an advantage by taking penalties.”

A York power play at 3:19 saw forward Sam Kamienski fire a shot just wide, and Kamienski came out in the second period and found a handful of quality shots on net to the 12-minute mark. Loyola goalie Cirian O’Brien was up to the task.

York’s Gregory Lee scored both of York’s goals against Loyola and the first came on a wraparound goal at 10:20 of the second period to make it a 1-1 game.

York goalie Adam Kaczmarek stopped a Max Gabal shot on a Loyola 2-on-1 chance at 5:21 of the second period, and York’s Shane Gorski rattled the post with a shot less than a minute later.

Kaczmarek made a pair of fine glove saves late in the period, before Loyola’s Will Schreiber broke in alone on net with 35 seconds remaining in the period and buried his chance to give Loyola a 2-1 lead.

Schreiber’s goal showed how Loyola’s offensive power always seems ready to strike. But the Ramblers’ defense has also been rock-solid this season, and nothing kick-starts an offense like a good defense.

“I think we had the best defensive core in the league last year and we lost a lot of them,” Loyola coach Scott Ciraulo said. “We didn’t know what we were going to get this year and they’ve just done an awesome job. We have Ryan Cowen back there and I think he’s one of the best players in the league. He skates like the wind, has really good hands, and he’s just solid.”

Gustafson and York’s Elijah Maurer traded shots on net to start the third period, both turned away, and O’Brien made a glove save on a shot from York’s Robert Plummer at the 11:59 mark.

O’Brien gloved a Gorski shot taken from the left side at 7:58 and Kaczmarek survived a mult-shot flurry from a Loyola scrum in front of the net. Kaczmarek stopped a point-blank shot from Cowen at 7:26 and another taken by Gabal at 6:35.

York tied the game at 2-2 when Gorski swept in up the right side and fired, and Lee was there to bury the rebound at 6:05.

York may have suffered a gut-wrenching loss to GBN less than 24 hours earlier, but the Dukes had clawed back to tie the game for the second time on Loyola’s home ice.

“That kind of adversity happens to every team,” Boeing said. “But I have no doubt that this team is going to come to work every game and grind it out. That resiliency is one of our strengths this year.”

Kaczmarek locked the net down from there to the end of the third period. A point-blank Schreiber shot, a Loyola 2-on-1, another quality glove save on a Cowen shot, and one more point-blank stop — Kaczmarek handled them all in the game’s final five minutes.

“That was a heck of a performance by (Kaczmarek),” Ciraulo said. “That was impressive.”

A predictably hectic 3-on-3 overtime period ensued. O’Brien saved a shot from Nolan Stasica early on and Kaczmarek handled a slap shot soon thereafter. O’Brien saved a Plummer breakaway shot and then saved a Lee shot in tight space with 1:30 remaining.

Kaczmarek stopped Gustafson again with time running out before Cowen scored the game-winner with only 14 seconds remaining in overtime.

After a Gustafson shot, the puck got loose in Loyola’s offensive zone “and then Garrett Grady forechecked his butt off and got the puck back for us,” Cowen said. “(Jack) Gustafson picked up the puck, he walked one guy in the middle, I saw a backdoor so I went and he gave me a perfect pass.”

Gustafson pass from the left side and Cowen’s finish at the far post gave Loyola the win.

Cowen saw plenty of accolades to spread around after the win.

“Jack Gustafson had two points with a goal and an assist, Cirian O’Brien played amazing and stood on his head, Will Schreiber, Garrett Grady, Ryan Boersma, and my defensive partner, Sam Roti,” Cowen said. “But I think everybody had a really good game.”

“I really liked the way the boys didn’t quit in the overtime,” Ciraulo said. “We focused on the breakout this week, and our ‘D’ really responded. They did well on the breakout and really bought in to what we planned for this week. We emphasized the forecheck and I thought the forecheck looked really good today.

“The last time we played this team I think Max Gabal scored two goals. He didn’t score tonight but he did a really good job on the forecheck. So while he wasn’t one of the goal-scorers, he was really important today and led to a lot of offense.”

Boeing liked the way his boys persevered as Saturday’s game wore on.

“Loyola is the number one team in the state right now and they do a really good job of getting that red line and getting pucks deep and outworking you,” Boeing said. “Once we had the opportunity to run some cycles in their zone it started to level out a little bit, and I think it averaged out to a very good tilt last night.”

Consecutive tough overtime losses notwithstanding, York has had no shortage of players stepping up.

“Frank Nicosia had two goals on Friday and he’s been so confident with the puck, in finding lanes and attacking the net,” Boeing said. “He’s been a huge part, he’s got grit, and he’s wearing a letter this year as an alternate captain for a reason.

“Bobby Plummer is an ultimate sniper. Give him a two-inch gap and he’s going to find it with the biscuit, so he’s been a huge part of our team. And having Nolan Stasica back from injury is another big pick-up.”

Game notes:
Loyola
A non-senior being voted captain is not necessarily a common occurrence at Loyola, but Cowen earned the honor this season for the Ramblers.
“He’s only a junior but he’s a captain,” Ciraulo said. “He’s strict with the boys, he expects a lot, and his leadership and talent has been exceptional.”
Cowen was pleasantly surprised when the honor came down.
“I was hoping for the ‘C’ for sure and was hoping to get at least an ‘A’,” Cowen said. “I worked my butt off at the start of the season and tried to push everyone as hard as I could to get better.
“You have to be able to make everyone better, keep the emotions up, and make sure everyone knows how well they’re playing because that keeps their morale up. And I never liked to yell at my teammates so it’s constructive criticism for sure.”

York
Loyola goalie O’Brien was rock-solid in net, and Kaczmarek’s night in goal was nothing short of exceptional.
“Adam kept us in the game, absolutely,” Boeing said. “Good teams will win but great teams have great goalies, and Adam was zoned in and dialed in.
“And he’s not very vocal on the ice but when he talks in the locker room, everybody listens. He has the ability to change the locker room, too, so we’re very fortunate to have Adam on our team this year.”
After a pair of tough overtime losses on Friday and Saturday, Boeing had a meeting on Sunday morning before the Dukes headed to Lake Forest Academy for a game.
“Leaders have got to rely on each other and it was a pretty successful meeting,” Boeing said. “We had a nice captains’ meeting for the varsity and jayvee and the whole coaching staff, just so everyone knows we’re all part of the same family.” 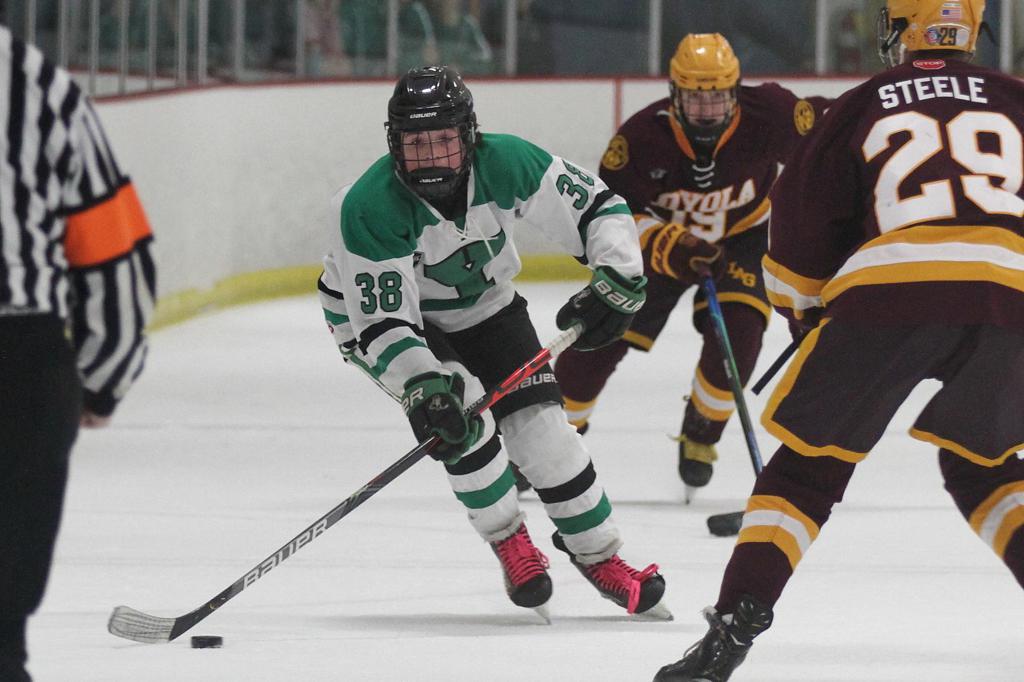 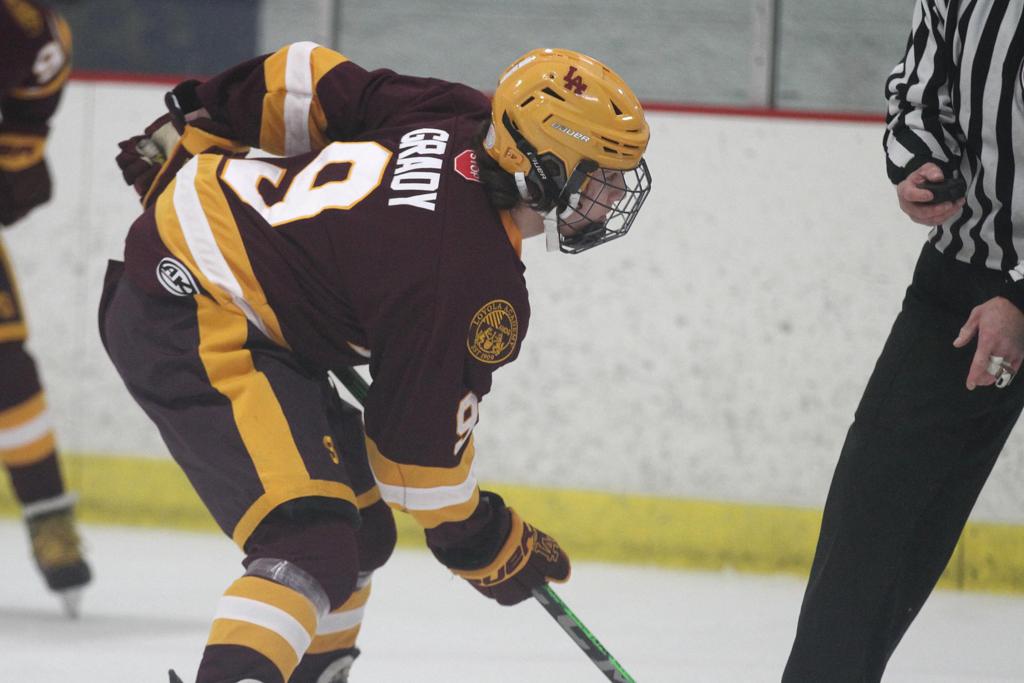 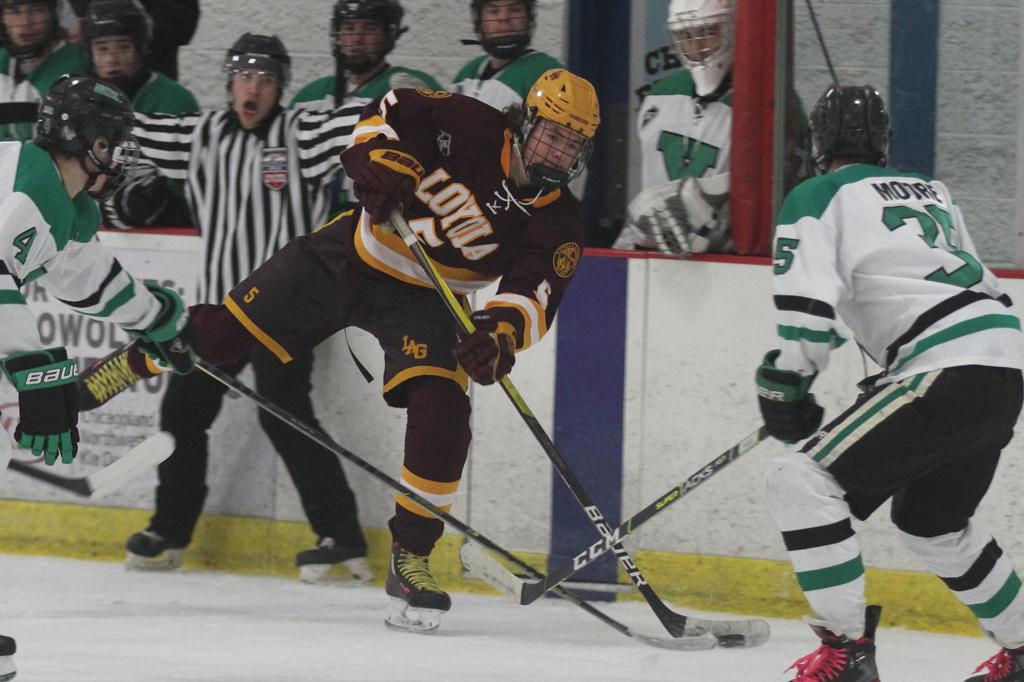 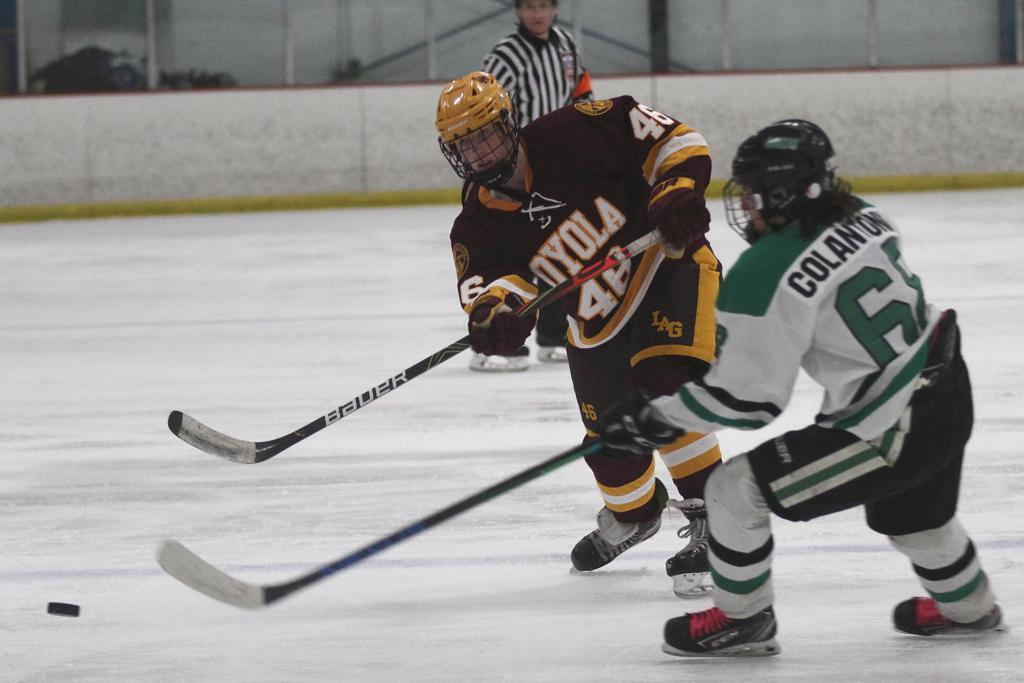 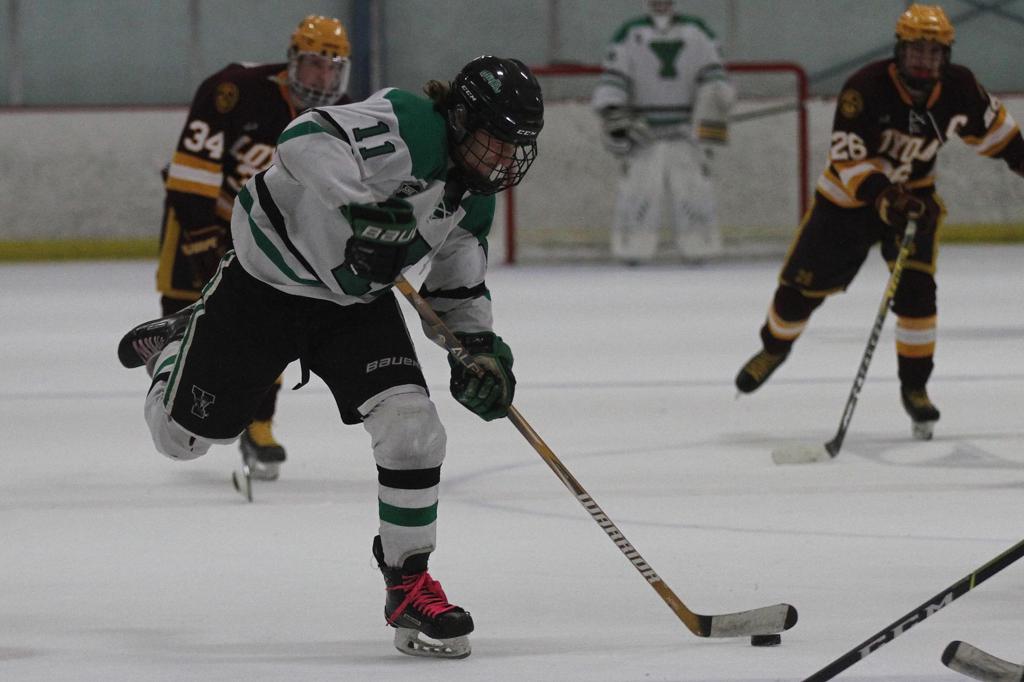 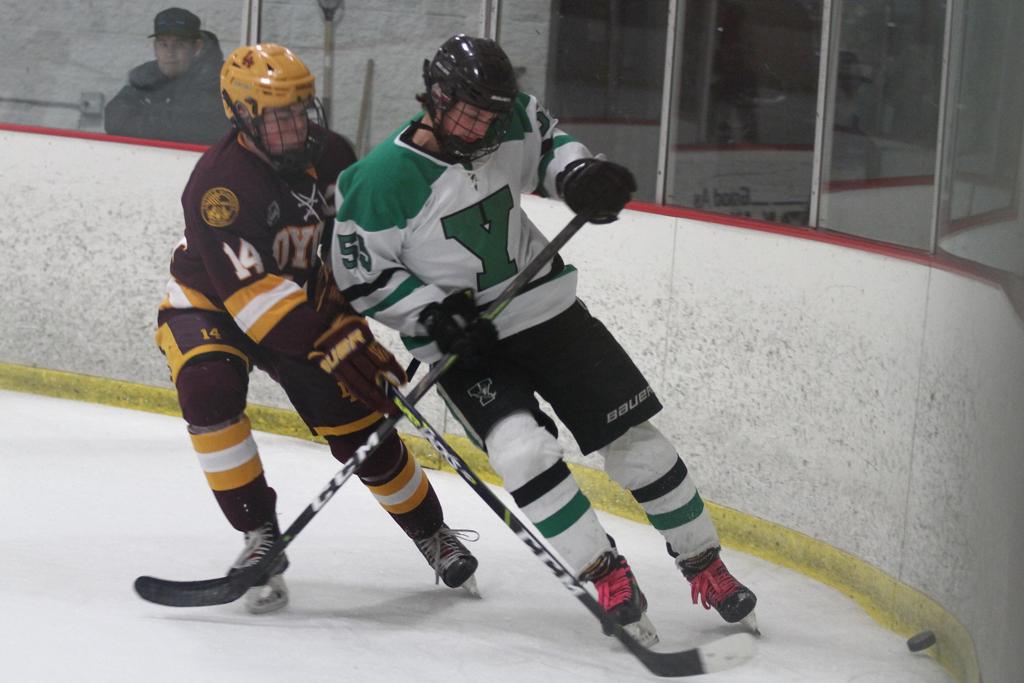 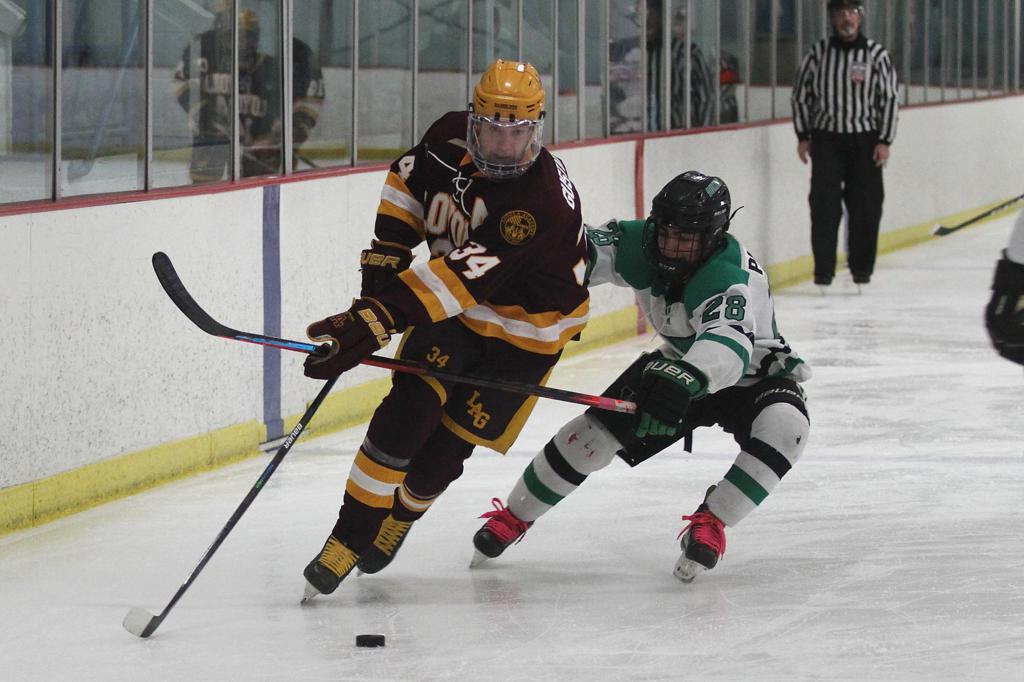